On 16 July 2019, a Boeing 738-800 (EC-LYR) being operated by Air Europa on a scheduled international passenger flight from Paris CDG to Malaga as AEA1036 and another Boeing 738-800 (EI-FRP) being operated by Ryanair on a scheduled domestic passenger flight from Palma de Mallorca to Seville as RYR61NN lost separation whilst both flights were descending under radar control on different frequencies and the Malaga-bound aircraft passed 1.3nm behind the unseen Seville-bound aircraft at the same level in day VMC.

The Spanish Commission for the Investigation of Accidents and Incidents (CIAIAC) carried out an Investigation using recorded ATC data.

About 40 minutes before the conflict occurred, an Airbus A320 aircraft not directly involved which had just landed on runway 13 at Malaga advised that it “needed to remain on the runway to have its tyres checked” and although TWR offered it runway 12, the crew refused so that runway 12 had to become the runway in use. The Air Europa 737 was heading south and was the next inbound aircraft for Malaga from the north and was notified of the runway change by the Seville ACC MA4 sector controller at around the same time as the sector also took over control of the Ryanair 737 inbound to Seville and heading west on a crossing track relative to the Air Europa 737.

During the following few minutes, the Seville MA4 Controller planned to achieve separation between the two aircraft vertically by instructing the Ryanair aircraft to descend above the descending Malaga bound aircraft as the latter vacated flight levels. Then, approximately three minutes before the loss of separation and with 15 nm to go to the point where Malaga APP airspace extended to FL145, he transferred the Malaga-bound aircraft (the lower of the two) to Malaga APP as it passed FL178 for FL150 (the latter level being the lowest available in the Seville ACC SM4 sector when over the Malaga APP sector. 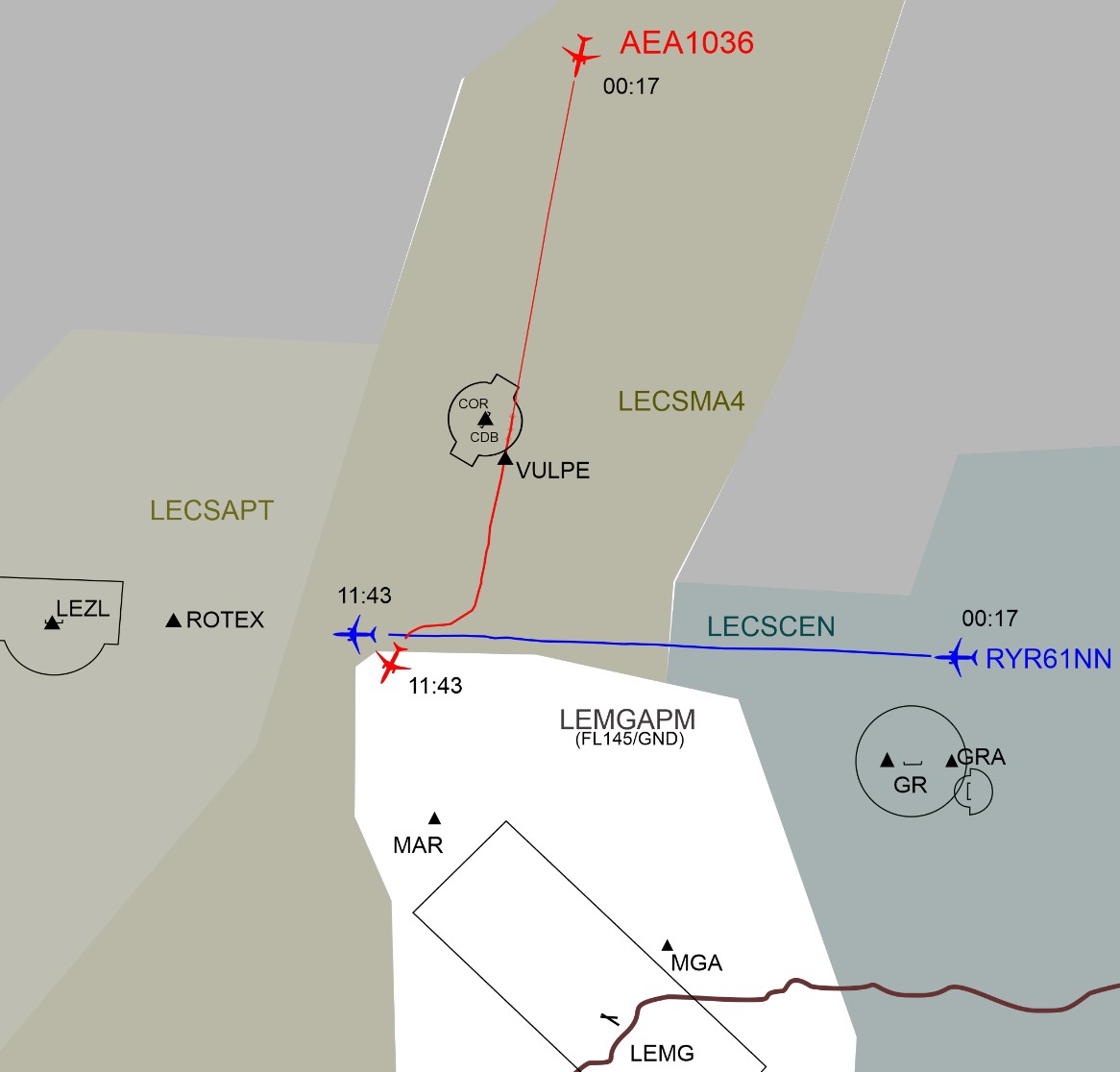 The ground tracks of the two aircraft involved showing the ATC sectors in the area. [Reproduced from the Official Report]

However, because of the runway change at Malaga, as soon as the Air Europa flight had checked in with Malaga APP, the controller there (unknown to the Seville SM4 controller) instructed it to turn 74º to the west which put it on a new trajectory that converged with that of the Ryanair flight descending into Seville with both aircraft still likely to be in the Seville SM4 sector when their tracks would now cross.

Approximately one minute before the loss of separation, when the Ryanair 737 would have been clear of the Malaga bound aircraft had the latter remained on the same track as it had at transfer (the Seville SM4 controller’s expectation) the Ryanair aircraft was cleared to continue descent to FL 130 and handed over to Seville APP. At this point, the aircraft was still approximately 20 nm from the sector boundary and passing FL 190. Shortly after the clearance to continue to FL130, and now working Seville APP, the aircraft increased its rate of descent to around 3,200 fpm whilst the Malaga-bound aircraft, now subject to delaying action, was descending through FL 161 at approximately 1,000 fpm.

Thirty seconds before actual the loss of separation, the distance between the two aircraft reached 1.7 nm as their vertical separation was reducing through 1,700 feet and a preductive STCA was activated. Although both aircraft were still within the control area of responsibility of the Seville  ACC SM4 sector, the Controller there had transferred communications with both flights to the next sectors in advance. Both aircraft were not only no longer working Seville ACC but each was now on a different frequency which belonged to different units. This STCA activation was initially noticed by the Malaga APP controllers, who then mistakenly called the Seville Central sector (which the Ryanair 737 had left five minutes previously to ask if they could see their aircraft and received the response that they could but did not add that it was no longer under their control. However, the Seville Central sector controller then contacted both the Seville MA4 sector controller and the Seville Airport controller to advise them of the Malaga APP controller’s concern as to whether they were aware of the Air Europa aircraft. The MA4 sector controller replied (incorrectly) that the flight was “no longer under his control” and it was found that “until that moment, he had not made any move to prevent a loss of separation despite the fact that the required minimum separations were breached whilst both aircraft were within his designated AoR". The MA4 sector controller did then call the Seville Airport controller on the hotline to tell him to stop the descent of the Ryanair 737 but no evidence was found of any response from them and “in any case, the minimum distance between the two aircraft occurred just a few seconds later” so it would have been very difficult to prevent the loss of separation at that stage. The final stages of the loss of separation are shown in the illustration below. 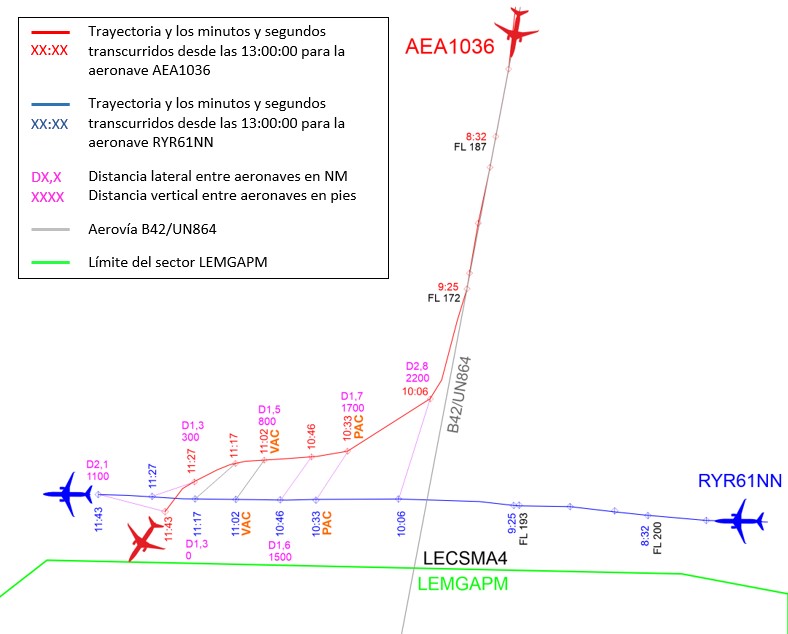 The tracks of both aircraft with their lateral and vertical separations at the timed points and (in blue) the elapsed time positions for the Ryanair 737 from 1300 UTC. [Reproduced from the Official Report]

The Malaga APP controller then instructed the inbound 737 to “turn south and accelerate its descent” in an attempt to prevent a loss of separation advising of the crossing Ryanair 737 and asked the crew to report when they had it in sight. They responded that although they were not visual with it, they could see it on on their TCAS traffic display. Sixteen seconds before the loss of separation, the two 737s were on convergent headings 1.6 nm apart with a track difference of 6º and with vertical separation reducing through 1,500 feet as the Ryanair 737 passed FL 169 and the Air Europa 737 passed FL 154. At that moment, the Ryanair 737 checked in with Seville APP and was cleared to continue descent to 4,000 feet QNH “despite the predictive STCA warning of insufficient separation between the aircraft”. Almost immediately, the STCA activation changed to an actual loss of separation with the two aircraft now 1.5 nm and 800 feet apart.

Fifteen seconds later, the CPA of 1.3 nm at the same level was reached as the Air Europa 737 passed behind the Ryanair 737. It was apparent that the Malaga APP controller’s request to the Air Europa 737 to increase its rate of descent was of no assistance because at the time the Ryanair 737 had been only 600 feet above and was already descending at a much higher rate whilst the Air Europa crew had already begun to reduce their rate of descent from about 1,400 fpm to less than 400 fpm. This meant that by the time they actioned this instruction, the two tracks had already crossed and the prescribed minimum distance had been restored. As both flight crews subsequently stated, no TCAS TA or RA activations occurred on either aircraft.

The Investigation examined the traffic situation in the Seville  ACC MA4 sector around the time of the early ‘transfer of communications’ with the Air Europa 737 to Malaga APP and found that the system for assessing the movement of aircraft in the sector and the percentage of the system's maximum workload which this represented registered 40%. It was therefore concluded that controller workload was not a factor,

It also looked at the Letter of Agreement (LoA) between Seville ACC and Malaga APP which had been effective since 31 May 2018 and included arrangements for a transfer of control to be effected other than when at the boundary of the respective Areas of Responsibility (AoR). These stated that "communications transfers of control other than at such boundaries will imply the transfer of control of the traffic, which must be transmitted when the aircraft is free for ascent in the case of take-offs, for descent in the case of arrivals and for turning in both situations”. The expressions “free for descent” and “free for turning” were both qualified in the LoA by “unless otherwise agreed, the transferring unit continues to be responsible for the separation within its AoR".

The Internal investigation of the event by ANSP ENAIRE resulted in a modified LoA effective from 31 December 2019 which included requirements that “the transfer of control takes place at the boundary of the AoR” and specified that “communications transfers will imply that the traffic is being transferred free for ascent in the case of take-offs, for descent in the case of arrivals and for turning in both situations”. However, this revision still allowed the accepting unit the freedom to turn aircraft, albeit now to a maximum of 45° only.

However, the Investigation noted that the continued option for a receiving unit to turn traffic accepted when still within the previous sector’s AoR would, even with the 45° restriction, have been unlikely to have prevented the loss of separation under investigation and concluded that “the measures taken by ENAIRE were not sufficient to prevent a similar event from occurring in the future”.

The Cause of the event was determined as the early transfer of the Ryanair Boeing 737 from the Seville ACC SM4 sector to the Seville Airport frequency resulting in a loss of separation between it and the Air Europe 737 inbound to Malaga.

A Contributory Factor was considered to have been “the Letter of Agreement between the units, which allowed them to make changes to an aircraft’s course while it remains in the previous control area”.

The Final Report of the Investigation was approved on 28 July 2021 and then released online simultaneously in both the definitive Spanish version and in English translation on 29 November 2021.