On 11 September 2019, a Boeing 737-800 landed at night on Runway 13 at Malaga only 520 metres behind a departing Boeing 737-800 which was about to become airborne from the same runway. The Investigation noted the relatively low level of aircraft movements at the time, that both aircraft had complied with their respective clearances and that the landing aircraft crew had judged it safer to land than to commence a late go around. The conflict was attributed to non-compliance with the regulatory separation minima and deficient planning and decision making by the controller.

A Serious Incident Investigation was carried out by the Spanish Commission for the Investigation of Accidents and Incidents (CIAIAC). The elapsed time between the date of the event and the date on which it was reported to the Commission meant that it was no longer possible to retrieve relevant data from either the FDR or the CVR of either of the aircraft involved. However, relevant data was available from the QARs of both aircraft as were recordings of all relevant ATC communications with both aircraft although intercommunication between the TWR and GND controllers was conducted by word of mouth and not recorded. Aircraft relative positions during the reduced separation were retrieved from ‘SATCA’, the automated air traffic control system, which also enabled synchronisation of the QAR data from both aircraft.

A single runway, 13, was in use for both arrivals and departures with excellent in-flight and on-ground visibility within the hours of darkness. The declared capacity applicable to single runway operations at the time was 16 arrivals and 16 departures per hour and movements were confirmed to have been comfortably within that limit.

The departing aircraft was instructed by GND to taxi to “the holding point for runway 13” without specifying which one of the available runway access routes available once past position A3 (see the illustration below) to use. The crew decided to taxi to HN-3, which was noted as being the default option specified in the AIP. However it was noted that the applicable ATC procedures had required that the GND controller should only clear the aircraft to holding point A3 so as to leave the TWR controller to decide which runway access to use. It was also noted that the use of HN-3 meant that the time taken to reach the runway from a standing start at its holding point once cleared to do so would be significantly longer than the alternatives because of both the distance and the uphill slope involved. 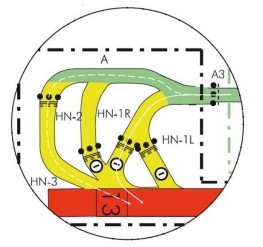 Access alternatives to the head of Runway 13. [Reproduced from the Official Report]

The position of the two aircraft at 19:52:27. [Reproduced from the Official Report]

Nineteen seconds later (19:42:46), the departing aircraft was instructed to make an immediate takeoff and by the time it had begun to taxi up HN-3 towards the runway, at 19:52:58, the inbound aircraft was 2.6 nm from the threshold.

The position of the two aircraft at 19:52:58 [Reproduced from the Official Report]

By the time the departing aircraft was “approaching the runway threshold” (19:53:29), the inbound aircraft was 1.4nm from the threshold and passing approximately 450 feet aal:

The position of the two aircraft at 19:53:29. [Reproduced from the Official Report]

Half minute a minute later (19:53:59), as the inbound aircraft was passing 150 feet agl and about to cross the runway threshold, a landing clearance was issued with the  departing aircraft just 710 metres (0.4nm) ahead and accelerating through a groundspeed of 94 knots:

The position of the two aircraft at 19:53:59. [Reproduced from the Official Report]

As the inbound aircraft crossed the runway threshold at 50 feet agl 4 seconds later at 150 knots groundspeed, the departing aircraft was at 111 knots and 710 metres ahead:

The position of the two aircraft at 19:54:03. [Reproduced from the Official Report]

The position of the two aircraft at 19:54:15 - Minimum on-runway separation. [Reproduced from the Official Report]

The applicable Air Traffic Regulations were noted to have required that “the minimum separation should have been at least the length of the runway in use”, in this case 3200 metres (1.7 nm) so that the minimum separation which occurred was only “approximately 16% of the statutory minimum”.

It was noted that a total of 34 similar loss of separation events between an inbound and a departing aircraft had been recorded as occurring at Malaga during single runway operations since the beginning of 2019. These had included four events in which the crew of an aircraft on approach had begun a go around on their own initiative and eight events in which the distance between the aircraft arriving and the aircraft departing had been less than 1 nm, a distance equivalent to just 60% of the statutory separation requirement.

The Cause of the event was formally documented as “an aircraft was given clearance to land on a runway that was occupied by another aircraft in the process of taking off, without respecting the regulatory distances”.

Two “urgent” Safety Recommendations were issued during the course of the Investigation, on 4 November 2020 and 11 November 2020 respectively as follows:

The Final Report of the Investigation was approved on 24 November 2021 and published simultaneously in English translation and in the definitive Spanish language on 23 December 2021.