On 5 January 2018, an out of service Boeing 737-800 was pushed back at night into collision with an in-service Boeing 737-800 waiting on the taxiway for a marshaller to arrive and direct it onto the adjacent terminal gate. The first aircraft s tail collided with the second aircraft s right wing and a fire started. The evacuation of the second aircraft was delayed by non-availability of cabin emergency lighting. The Investigation attributed the collision to failure of the apron controller and pushback crew to follow documented procedures or take reasonable care to ensure that it was safe to begin the pushback.

On 5 January 2018, a Boeing 737-800, (C-FDMB) being operated by WestJet on a scheduled international passenger flight from Cancun, Mexico to Toronto as WJA2425 was stationary with engines running abeam the assigned gate at destination awaiting the ground personnel needed to marshall it onto its assigned arrival gate in normal night visibility when an out of service Sunwing Airlines Boeing 737-800 was pushed back and its tail collided with the right side wing of the WestJet aircraft. Fire broke out in both aircraft and a MAYDAY was declared by the WestJet crew and an emergency evacuation of their 169 passengers was carried out with no reported injuries. The Sunwing aircraft was detached from the impact position and towed away from it and the fires affecting both aircraft were extinguished without creating any direct personal hazard. The only recorded injury during the evacuation was a minor one to a member of the cabin crew.

A “limited-scope, fact-gathering” Investigation was carried out by the Canadian Transportation Safety Board (TSB). It was noted that the inbound WestJet aircraft had been waiting for marshalling onto its assigned gate B12 at Terminal 3 and had been stationary and facing north east on Taxi Lane 2 just short of the gate turn on. This placed it behind the Sunwing aircraft parked nose-in and out of service on gate B13. The Sunwing aircraft had a technician employed by the aircraft operator on the flight deck and its APU was running. Two Swissport employees were in the cab of a tug attached to the nose of the aircraft and preparations were being made to push the aircraft back prior to repositioning. 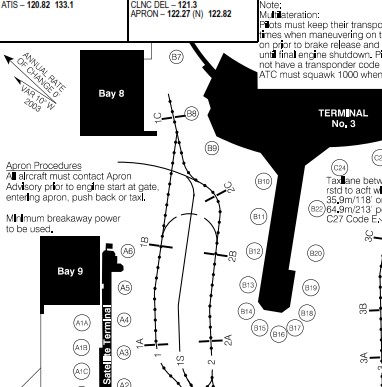 The area where the collision occurred. [An extract reproduced from the Canada AIP Toronto Terminal 3 Parking Areas Chart]

Sixteen minutes after the WestJet aircraft had stopped, it was still waiting for a marshaller when the other 737’s tug crew called ‘APRON NORTH’ for clearance to push and were told they could “push back at your discretion”. The push was then commenced without wing walkers and without awareness of the aircraft behind. Soon afterwards, the tail of the aircraft being pushed back hit the right wing of the WestJet 737 and the latter’s crew advised ‘APRON NORTH’ of the collision and they in turn instructed the tug crew to pull their aircraft back onto gate B13.

Thirty seconds after the impact had occurred, “a large ball of fire erupted near the area of aircraft contact”. The WestJet flight crew were immediately aware of the fire and began the evacuation quick reference checklist, declared a MAYDAY and advised that an evacuation was commencing. The ARFF were notified accordingly. The Sunwing technician shut down the APU and discharged the APU fire extinguisher before exiting the flight deck via the left side window and the emergency rope, sustaining minor injuries as he did so. Once the Sunwing aircraft had been pulled clear, the fire on the wing of the WestJet aircraft self-extinguished, but the fire at the tail of the Sunwing aircraft continued, although with less intensity.

Meanwhile, when the fire erupted, some of the WestJet passengers panicked and “three seconds after the fire erupted, and before any commands from the crew, passengers seated at the forward left over-wing emergency exit opened the exit and escaped onto the wing; other passengers followed". At this point, the engines were still running. Two members of cabin crew seated at the rear of the aircraft saw the fire and, having seen that some passengers were panicking, decided that an immediate evacuation should be commenced. They judged that it was not safe to use the rear right door and called the Captain and lead cabin crew by interphone to report the fire and advise that that they were evacuating via the rear left rear.

The two members of cabin crew at the front of the aircraft did not immediately begin to evacuate because they were waiting for a command to do so from the flight deck. The lead cabin crew also reported being aware that as the engine were still running, opening the front doors would put the passengers at risk. The flight crew ran the evacuation checklist but the engine and APU fire switches were not pulled because the First Officer “deemed this action not relevant to the current situation”. The unappreciated consequence of this was that neither the internal nor the external emergency lights were automatically activated.

Forty-nine seconds after the fire had begun, the Captain made a PA ordering an emergency evacuation. Both front doors were opened and in accordance with Company SOP, the First Officer then left the aircraft to assist the passengers. It was reported that although cabin crew made calls with and without the assistance of a handheld megaphone instructing passengers to leave their carry-on baggage behind, many still brought it with them which slowed down the evacuation. Also, some passengers who used the two left over wing exits re-entered the aircraft after failing to see either a slide or the (in the absence of illuminated external emergency lights) the arrows showing the exit route to and down the extended trailing edge flaps.

It was found that from the time the Captain ordered an evacuation, it took almost 2½ minutes to complete and from the time the left over wing exit was opened, almost 3½ minutes. Once outside, the evacuated passengers moved away from the aircraft towards A4 gate on the other side of the two Taxi Lanes. All occupants had left the aircraft by the time the ARFF arrived and the fire in the Sunwing aircraft’s tail and APU had subsided but was still smouldering. As the remnants of the fire were extinguished, one of the fire crew sustained “minor injuries from exposure to secondary spray of water that was mixed with fuel from the APU”.

The Investigation looked at a number of aspects related to the event as follows:

The Conclusions of the Investigation were summarised as follows:

The Final Report of the Investigation was authorised for release on 4 July 2018 and it was officially released on 11 July 2018. No Safety Recommendations were made.