On 21 July 2017, a Boeing 737-800 taking off from Belfast was only airborne near the runway end of the runway and then only climbed at a very shallow angle until additional thrust was eventually added. The Investigation found that the thrust set had been based on an incorrectly input surface temperature of -52°C, the expected top of climb temperature, instead of the actual surface temperature. Although inadequate acceleration had been detected before V1, the crew did not intervene. It was noted that neither the installed FMC software nor the EFBs in use were conducive to detection of the data input error.

On 21 July 2017, a Boeing 737-800 (C-FWGH) being operated by Sunwing Airlines on behalf of Thompson Airways (since renamed TUI Airways) on a non-scheduled international passenger flight from Belfast International to Corfu as TOM1526 began its takeoff from intersection ‘D’ on runway 07 in day VMC. After using almost all the available 2654 metre TORA, the aircraft was observed climbing away at a very shallow angle over generally flat terrain. After just over 2 nm and approximately 800 feet aal, additional thrust was added, a normal rate of climb was established and thereafter the flight was completed without further event. The aircraft was subsequently found to have struck an approach light 36cm tall which was located 29 metres beyond the end of the runway, but to have been undamaged by this impact.

An Investigation was commenced by the UK Air Accidents Investigation Branch (AAIB) after it became aware of the event three days later, by which time relevant data on both the FDR and CVR were found to have been overwritten. It was also found that neither of the two QARs installed on the aircraft were functioning and reconstruction of the circumstances was reliant on time consuming analysis of other data from a range of sources which included the A/T BITE system, the EGPWS memory, EFB data, radar and ADS-B data and airport CCTV recordings. Some data from the Aircraft Condition Monitoring System (ACMS) of use to the Investigation were automatically transmitted via ACARS to the aircraft operator, but when its PCMCIA Card was subsequently removed, it was apparent that data storage had not been programmed.

Although the Canadian aircraft operator did eventually report the event to Canada’s TSB, they did not report it directly to the UK AAIB and the aircraft commander failed to report it at all to either the UK or Canadian Investigation agencies. It was noted that both of these parties, as well as the airline for whom the flight was being operated and the aerodrome authority, “had a legal duty to report the event to the AAIB”. It was noted that Belfast ATC, which, it was considered, should have been sufficiently aware of the event to know that it was likely to be considered a Serious Incident, had merely raised an out of office hours UK CAA MOR in accordance with their corresponding procedures.

During the pre-flight preparations, each pilot independently completed weight and balance and performance calculations on their respective EFBs for a departure from runway 07 entering at taxiway ‘D’, which gave a 2654 metre TORA. After crosschecking, these calculations were entered into the FMC. However, at an undetermined point, a figure of -47°C was entered into the FMC as the OAT without either pilot noticing and since this parameter is used in the FMC calculation of the required takeoff thrust setting, a much lower thrust setting than that appropriate was calculated by the FMS. This calculated rated thrust was then further reduced in accordance with normal procedures by entering a (correctly-calculated) assumed temperature of 47°C.

During pushback, the ground crew saw an area of excessive tyre wear on one of the NLG tyres and it was decided to return the aircraft to its gate and change both NLG tyres. Whilst this was happening, the First Officer re-calculated the takeoff performance data which, after being crosschecked by the Captain, was entered into the FMC by the First Officer using 48°C as the (correctly updated) assumed temperature for the intended reduced thrust takeoff. However, an incorrect value of -52°C was then entered to replace the previously-entered (and also incorrect) value of -47°C as the OAT, again without either pilot noticing. The FMC then used this information to calculate and display a required takeoff thrust setting of 81.5% N1 whereas the EFB calculations made independently by both pilots prior to FMS data input had produced a required N1 of 92.7%. This EFB-calculated figure was not displayed to the pilots at the time, but was established by accessing the two EFBs used during the Investigation.

Nine minutes after the first pushback, the flight was again pushed back and taxied to the runway and, having received a corresponding clearance, began its takeoff on runway 07 from the taxiway ‘D’ intersection. The pilots stated that at around 120 / 130 KIAS (the V1 was 144 KIAS), they had realised that the aircraft was not accelerating normally but had continued with the engine thrust unchanged and had reached Vr approximately 300 metres before the end of the 2654 metre-long runway and become airborne immediately prior to its end. Multiple witnesses, including the TWR controller, reported that the aircraft “took a significant time to lift off before climbing at a very low rate”. The controller reported having decided to “allow the pilots some time” rather than immediately transfer the flight to the radar frequency, which was usual practice as he had been “sure they had a problem they were dealing with and that they would call him if they needed anything”. However, when there was no such call, he proceeded with the transfer. The crew checked in as instructed and were subsequently cleared en route without indicating to any ATC unit that there had been anything abnormal about their takeoff or initial climb out. A message recommending an inspection of the aircraft on arrival at its destination was passed to the aircraft operator who subsequently reported that no damage had been found as a result of such an inspection.

Continued concern at what had been seen resulted in the TWR controller suggesting, after a discussion with an airport fireman who had also witnessed the takeoff, that the airport operator should carry out a runway inspection. This found that one of the runway 25 supplementary approach lihts located within the stopway 29 metres beyond the end of the TORA and 36cm high was lying on the ground with substantial damage evident. It was initially assumed by airport staff that the light had been blown over by jet blast, something which had previously been seen at the same airport after takeoffs by much larger aircraft - although in this case usually near the beginning of the runway behind the point where an aircraft had commenced its takeoff roll. However, a subsequent closer examination by the Investigation team found that significant impact damage had occurred to the light, which had also acquired a pattern of black rubber deposits corresponding to the tread on the tyres fitted to the aircraft involved. 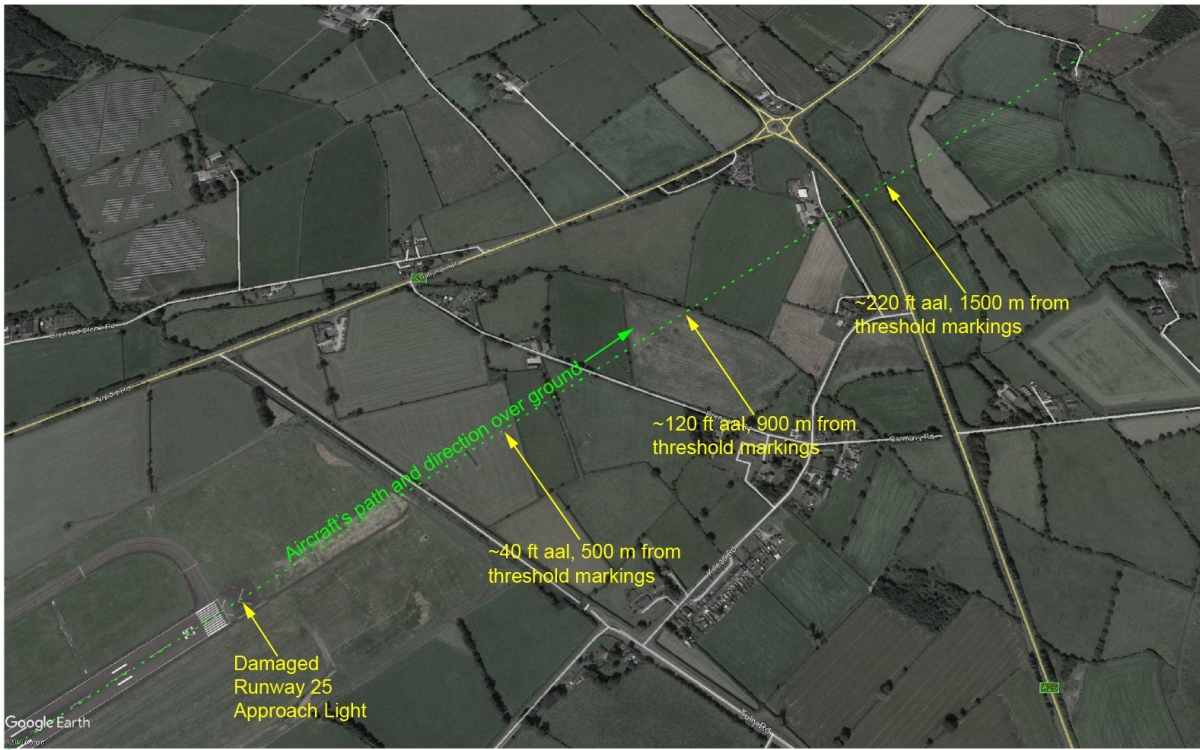 Groundspeed data for the takeoff in relation to the EFB calculated V1 and Vr. [Reproduced from the Official Report] 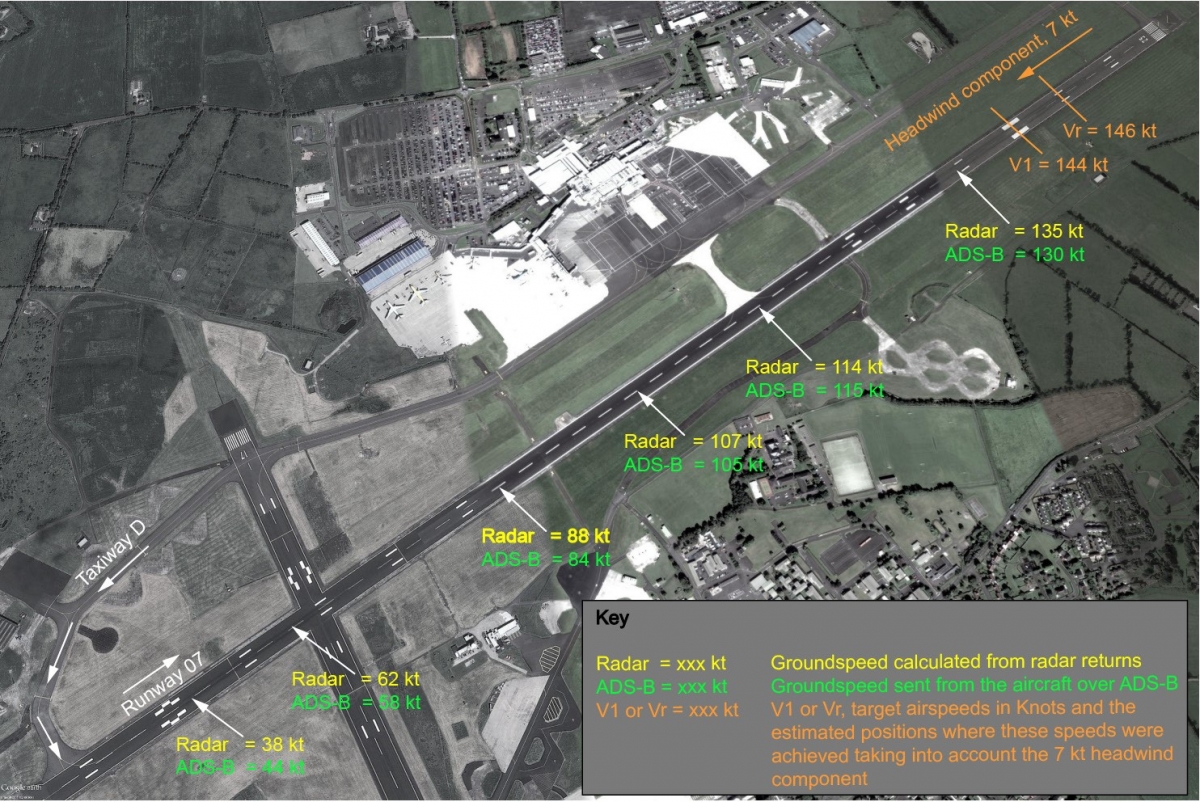 The vertical profile during the initial climb after takeoff. [Reproduced from the Official Report]

It was found that after previous events in which incorrect OAT figures had been entered into the FMC prior to takeoff, Boeing had issued an FCOM Bulletin which highlighted the fact that “an incorrect reduced thrust target may result in slower acceleration to V1, which may invalidate the takeoff performance calculations and/or result in decreased obstacle clearance margins after liftoff” and the specific need for flight crews to verify the OAT entry on the N1 LIMIT page. It was also found that the most recently updated FMC software version would, subject to a required update of the Common Display System (CDS), have provided an automated crosscheck between the OAT entered by the crew and the OAT detected by an external sensor. This optional update had not been installed in the aircraft under investigation whereas if it had been, it would have precluded the possibility of data entry errors like the one made.

It was noted that a considerable number of previous investigations by the AAIB and other State Investigation Agencies had involved events attributable to a range of data entry errors which had gone undetected and then led to the use of incorrect FMC-calculated takeoff thrust settings.

The formally-documented Findings of the Investigation included, but were not limited to, the following:

The investigated Serious Incident was attributed to three Causal Factors as follows:

Safety Action taken in response to the event whilst the Investigation was in progress was noted as having included, but not been limited to, the following:

A total of four Safety Recommendations were made at the conclusion of the Investigation as follows:

Two earlier Safety Recommendations were included in a Special Bulletin, S2/2017, which was published on 20 September 2017 in order to provide initial information on the circumstances of this Serious Incident and clarify requirements for the reporting of accidents and serious incidents. These both related to FMC software updates, one of which has now been superseded by Recommendation 2018-012 above and the other of which was as follows: