On 7 September 2019, the crew of a Boeing 737-800 completed a circling approach to runway 18R by making their final approach to and a landing on runway 18L contrary to their clearance. The Investigation found that during the turn onto final approach, the Captain flying the approach had not appropriately balanced aircraft control by reference to flight instruments with the essential visual reference despite familiarity with both the aircraft and the procedure involved.It was concluded that the monitoring of runway alignment provided by the relatively low experienced first officer had been inadequate and was considered indicative of insufficient CRM between the two pilots.

On 7 September 2019, a Boeing 737-800 (B-1949) being operated by China Shanghai Airlines on a scheduled international passenger flight from Shanghai Pudong to Busan (Gimhae) as CSH829 making a circling approach to runway 18R at its destination in day VMC failed to correctly complete the turn onto final approach for the runway it was cleared to land on and instead landed on the military-use-only runway parallel to it despite a late ATC instruction to go around. The unauthorised landing fortunately had no consequences as the runway used was unobstructed.

An Investigation was carried out by the Korean Aviation Accident Investigation Board but due to late notification of the event, it was not possible to retrieve relevant data from either the CVR or FDR of the aircraft. Relevant recorded ATC data and a statement by the Captain concerned were available.

The 36 year-old Training Captain in command had a total of 10,322 total flying hours experience including 3,991 hours on type. He had previously made around 20 flights to Busan, six of which had been circling approaches to runway 18R. The 27 year-old First Officer had a total of 3,331 flying hours experience of which all but 258 hours were on type and had not previously operated to Busan. During the investigated approach, a 23 year-old TWR controller was in position and a 42 year-old shift supervisor was present. Both monitored the circling aircraft.

Busan is a joint military/civil use airport with TWR control provided by Air Force controllers with approval to control civil traffic issued by the Korean Transportation Safety Authority. Entry to the TERPS-determined Circling Approach Procedure to runways 18L/R was provided by use of the VOR/DME procedure illustrated below. 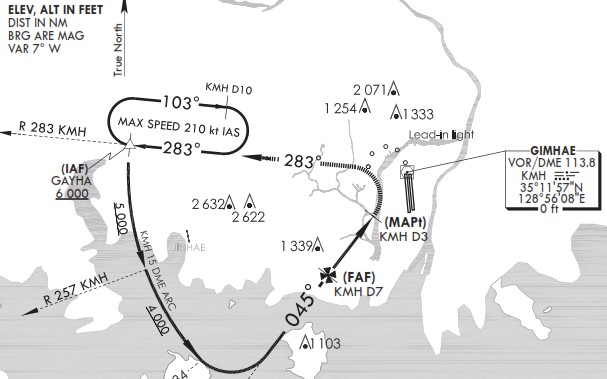 The VOR/DME approach which provides access to the runway 18L/R Circling Approach ’A’. [Reproduced from the AIP in place of the poor reproduction in the Official Report]

Shanghai Airlines, recognising the complexities of operations into Busan had specific instructions, a copy of which was provided to the Investigation, for such approaches and specifically for the circling approach to runway 18R (runway 18L is for military use only). These instructions were found to stress the importance of correctly flying the continuous one nm radius right turn from downwind to final by reference to the 5 lighted position of the Runway Lead-in Light System (RLLS) of flashing white lights (see the first illustration below for their position). Each lead-in light position consists of a group of three or more lights installed at ground level or on masts (see the second illustration below for an illustration of one of the elevated ones). They also added that the aircraft must “circle around” (i.e. track just outside) a small hill identified as Samjung-dong which instructions stated should be regarded as a “downwind reference point (in that) if a pilot controls the aircraft to pass the hill correctly, the aircraft will be within circling protection area” and also in a position from where the fifth turning point (at 1500 metres from touchdown as the aircraft lines up on final approach) will be attainable without overshooting the 18R extended centreline. 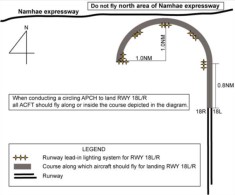 The positions of the five lights of the circling approach lead-in lighting system. [Reproduced from the AIP due to poor reproduction in the Official Report] 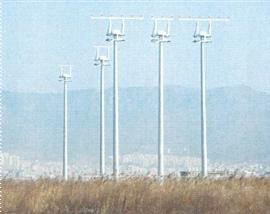 One of the lighting system points. [Reproduced from the Official Report]

In respect of ensuring that the continuous base turn is completed not only onto the runway 18R extended centreline but arrives on it at the appropriate height relative to range from touchdown, whilst the PAPI on the left side of the runway 18R threshold provides the usual signals directed “up” the approach along the runway centreline, the PAPI on the right of the runway is offset by 12° to the west so that an aircraft half way round the 1 nm radius turn can see how the descent relative to range is going (see the illustration below). All civil aircraft must maintain VMC at 1 500 feet aal on the downwind leg unless instructed otherwise by ATC. Once the first lead-in light has been passed the recommended heights are as shown on the illustration. 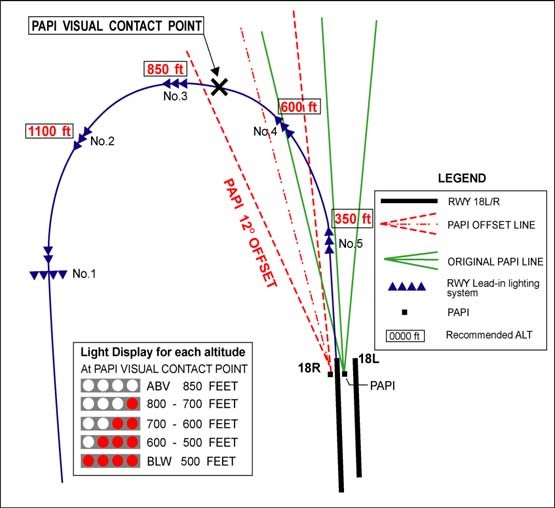 The offset PAPI display relative to height at the “PAPI Visual Contact Point”. [Reproduced from the AIP due to poor reproduction in the Official Report]

The Investigation was informed that the airline had comprehensive arrangements for ensuring all operations at “special aerodromes” such as Busan which included pilot training requirements for validation and renewal of crew members’ special aerodrome qualifications. To be approved, a Captain must have “at least 300 hours of flight experience and pass a technical test conducted by a flight check inspector”. They may then operate to such aerodromes for 12 months before re-qualification.

In excellent visibility, the VOR/DME intermediate approach was completed essentially as required except that the entry into the downwind leg was slightly delayed so the required base turn radius to complete the positioning onto final approach was reduced. The flight reported downwind to TWR and was told to report back at the third RLLS point which, when subsequently called, was followed by a spot wind check (230°/12 knots) and landing clearance for runway 18R and was acknowledged. However, the base turn was made too early and required a greater than normal angle of bank to arrive on final approach.

The TWR controller stated that although he noted the aircraft was being manoeuvred in the base turn somewhat differently to how he was used to seeing, it remained within the radius of the circling approach area. He stated that he had then observed the aircraft turning onto final approach closer to the runway threshold than normal and had commented to the shift supervisor that it looked as though it might be about land on runway 18L but the view from the TWR Visual Control Room (VCR) made it difficult to tell and only became sure as it was over the 18L threshold. On advice from the shift supervisor, he instructed the aircraft to go around but it continued without the crew responding and touched down on runway 18L and no adverse consequences followed. The controller stated that since he was aware that 18L was clear, he had decided not to repeat the ignored go around instruction.

On completion of the uneventful landing roll, the aircraft Captain acknowledged to the shift supervisor that he had been “distracted by external conditions and too much focused on controlling the aircraft” and apologised for his action. The shift supervisor responded by reminding him of the potential consequences of his error. After taxiing to the ramp for passenger disembarkation, the Captain stated to the GND controller that he “had failed to recognise the aircraft's approach to runway 18L before landing”. 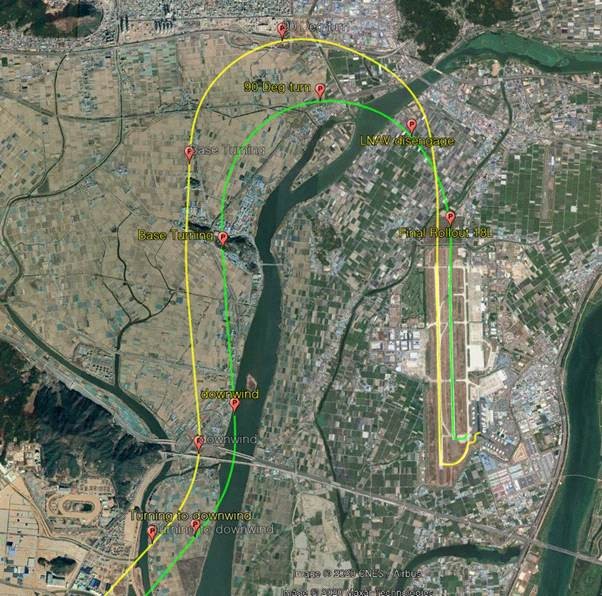 A comparison of the normal (yellow) and actual (green) ground tracks towards runway 18R. [Reproduced from the Official Report]

The Investigation concluded that after aligning too close to the runway when turning onto the downwind leg of the circling approach, the Captain had then ignored the company requirement to make use of the visual “downwind reference point” when beginning the base turn. Having commenced the base turn too early, he had then been unable to make use of either the guidance available from the RLLS system or right of threshold PAPI. As a result, arrival on final approach was late, leaving little time to confirm a landing was imminent on the correct runway. It was considered that the fact that the First Officer was on his first flight to Busan and in addition had limited flying experience had mitigated against his effective monitoring of the senior Captain’s approach. Overall, it was concluded that “crew resource management was not sufficiently implemented on the flight deck”, notably with an instructor Captain in command.

The Probable Cause of the Serious Incident was formally documented as “during a circling approach under VFR, the flight crew failed to land on runway 18R and instead landed without authorisation on runway 18L”.

The Final Report was completed on 25 November 2021 and released in English translation on 24 December 2021.