On 11 May 2015, a Boeing 737-800 crew making a night landing at Christchurch had to react quickly when braking action deteriorated and only just succeeded in preventing an overrun. The Investigation found that a damp rather than wet runway had been assumed despite recent rain and that the aircraft operator had recently changed their procedures so that a damp runway should be considered as dry rather than wet for runway performance purposes. The questionable determination of the crew that the runway was likely to be damp, not wet, was attributed to a relatively high workload prior to final approach.

On 11 May 2015, a Boeing 737-800 (VH-VOP) being operated by Virgin Australia on a scheduled international passenger flight from Sydney to Christchurch using callsign Velocity134 failed to decelerate as expected on destination landing runway 29 after making a night visual approach as cleared. It was only just possible to stop the aircraft before the end of runway which, due to work in progress on the main runway, was shorter and was reported by the crew as having been wet rather than, as they had assumed, damp.

It was established that prior to departure from Sydney, the crew were aware of the NOTAM which advised that the main runway at Christchurch, runway 02/20, would not be available for landing in the 20 direction. They also noted that no significant weather was forecast for their expected arrival time although rain was expected after it.

Forty minutes prior to landing, the Captain obtained the Christchurch weather which was as expected from the forecast and favoured an approach to runway 02, which had an LDA of 1920 metres. Ten minutes later, whilst still at FL390, Christchurch Area ATC were contacted and they advised that the destination weather had changed and that the runway for landing would now be 29, which unlike 02 was not grooved and had an LDA of only 1703 metres. It was suggested that the crew might wish to listen to this new ATIS due to the significant changes and the new surface wind was given but no mention was made of the rain now falling and the Captain did not subsequently have time to listen to the ATIS. Whilst preparing for the revised arrival, weather was observed on arrival route ahead and deviations around it were agreed with ATC. The crew subsequently stated that this increased workload had required the Captain as PM to concentrate on FMS inputs and assessing the landing performance on the shorter runway 29 and the First Officer to manage the weather deviation and “focus on the implications of landing on a shorter runway” than had been expected. The crew stated that they had considered the possibility of taking up a hold to give more time to plan the new approach but had not then considered this was necessary. 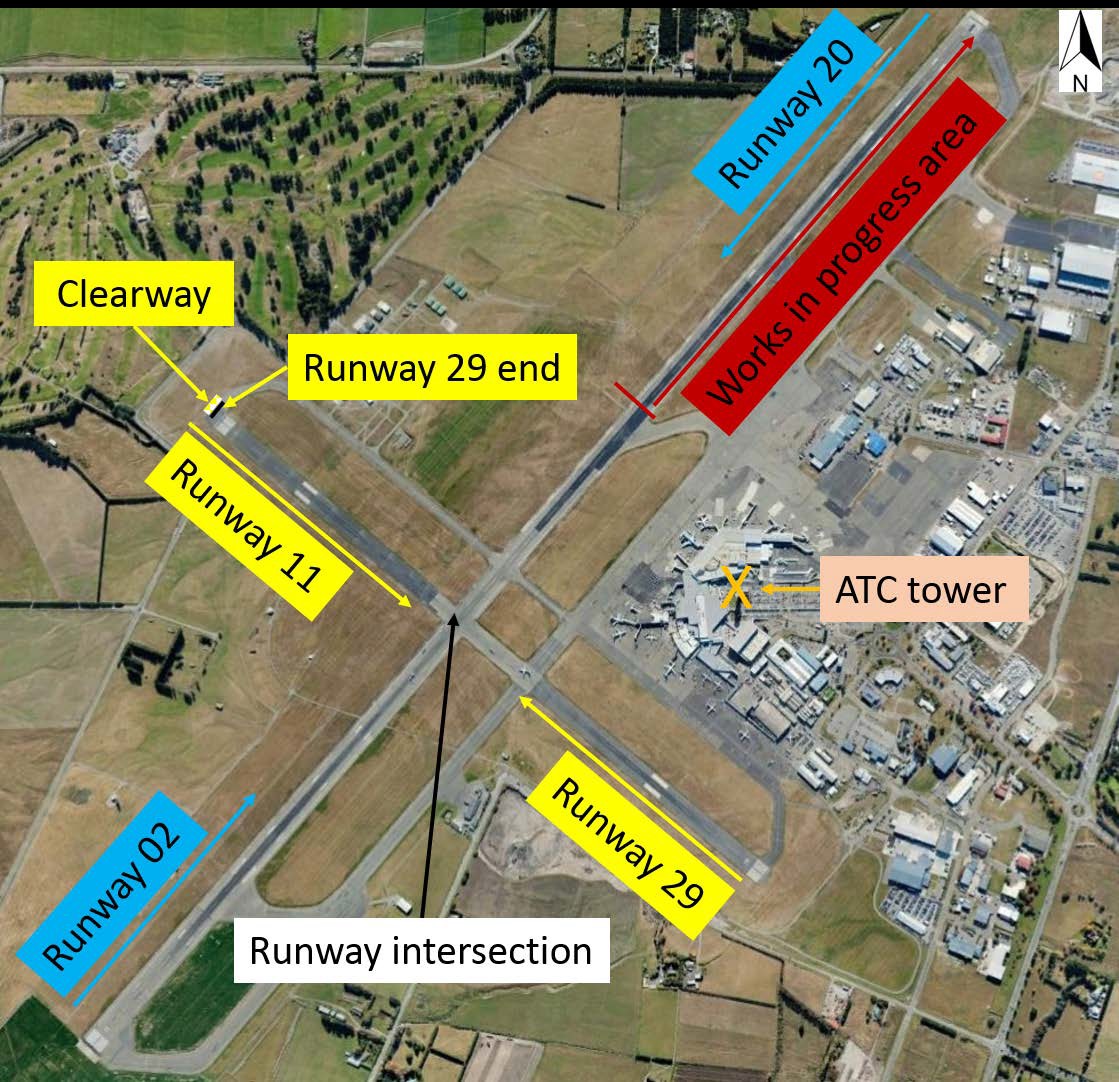 An annotated aerial view of the intersecting runways at Christchurch. [Reproduced from the Official Report]

Shortly after beginning descent to FL160 as cleared, ATC advised that the landing runway was now wet in light rain and a new ATIS had been issued. The crew did not recognise that this meant that rainfall intensity had reduced since they were unaware of the “rain” reported on the previous ATIS and although they recollected hearing of the light rain on this latest ATIS, they did not listen to it directly because ATC had passed all the relevant details from it.

The Captain consulted the on board Airport Analysis Manual and determined that a 29 landing on a damp runway (which was equivalent to a dry one according to Virgin Atlantic procedures) was possible at a landing weight of up to 68.2 tonnes with flap 40 set and that their 60.1 tonne ELW was well within it. The crew were aware at this time that a wet runway would have put their ELW about 1 tonne over the limit. It was decided that autobrake setting ‘3’ rather than ‘MAX’ was appropriate. Another new ATIS was issued just 7 minutes after the previous one and ATC advised the surface wind was easing - currently 240° at 5 knots – and that the rain had now stopped. The fact that the runway was still being notified as wet, which the crew had not been aware of, was not mentioned.

The aircraft was cleared for a visual approach with the surface wind advised as light and variable and subsequently, just before a landing clearance was issued, as calm. The Captain reported that on final approach, he had assessed the visible runway surface as being damp rather than wet on the basis that it did not appear reflective. Immediately after touchdown within the TDZ, full reverse thrust was applied and the speedbrakes deployed. As the aircraft passed the runway 02/20 and 11/29 intersection, the First Officer stated that he had no longer felt the sensation of being restrained against the seat belt and shoulder harness and the aircraft had ceased to continue decelerating as expected and instead had felt like it was ‘sliding’. In response, he had applied constant ‘hard’ (but not full) manual braking, overriding the autobrake. The Captain stated that there had been “a lot more surface water on that section of the runway” than that encountered initially. Both pilots reported that they were aware of the antiskid operating. Reverse thrust was retained to assist the reduced braking effect and the Captain stated that when reverse thrust was removed near to the end of the runway, “there was enough surface water on the runway to create a wall of spray”. One of the cabin crew also reported that they had been unable to see outside the aircraft during the landing roll because of the “large amount of water spray”. The aircraft came ‘slowly sliding’ to a stop about 5 metres from the runway end lights and was subsequently taxied to the terminal. About 3 minutes after the landing, a new ATIS notified the active runway as 02 and its surface condition as ‘damp’ rather than the ‘wet’ as previously notified for runway 29.

FDR data showed that the approach had been stable with a 5 knot tailwind component just prior to touchdown at 138 KCAS, three knots above the applicable VREF40. The autobrake 3 target deceleration rate of 0.224 g was initially achieved and then exceeded to a maximum of 0.29 g. At around 80 knots, soon after crossing the runway intersection, autobraking was replaced by manual braking during which deceleration rate had reduced below the autobrake 3 target despite the application of more than autobrake 3 pressure to override it. The average deceleration rate from for the complete landing roll was recorded as about 0.179 g and reverse thrust, normally reduced around 60 knots was reduced to idle at a ground speed of about 20 knots.

An engineering inspection after the flight found no evidence of abnormal tyre wear or damage indicative of reverted rubber aquaplaning with the tyre pressures also normal and the aircraft maintenance records showing no pre-existing defects with the brake system. This inspection also found that the engines and fuselage were covered in dirty water which would be expected when reverse thrust had been used at high power settings on a wet runway.

Although a review of weather radar images showed that there had been a period of “light to moderate” rain in the Christchurch area for almost 40 minutes ending 7 minutes before the landing under investigation, the meteorological authorities stated that only a small amount of rain had been recorded and “they considered it unlikely that this resulted in standing water on the runway”.

The FDR data were used by Boeing to run simulations which attempted to characterise the amount of brake pressure applied and the runway conditions. Subject to the assumptions made about the condition of the pavement and the commanded brake pressure, results indicated that:

Boeing further opined that since the runway was not grooved, if standing water was present between the intersection and runway end, braking action would have been (further) reduced.

The Investigation noted and discussed the 2005 Boeing 737 overrun at Chicago Midway and the 2015 FAA Safety Alert For Operators (SAFO) 15009 ‘Turbojet braking performance on wet runways’ which warned that the 15% safety margin applied to wet runway performance data “may not provide a safe stopping margin under all conditions”. This subject was considered by the Investigation in considerable detail, in particular but not only in respect of how Virgin Australia flight crew documentation presented landing performance issues. The considerable work on runway surface conditions and braking action reports was also reviewed in some detail including the recommended used of the RCAM matrix produced by the FAA’s TALPA ARC.

Some concern was expressed at the failure of the Operator to ensure that the flight following function described in their “Flight Dispatch Policy Manual” had not resulted in the crew being passed the amended Christchurch TAF which had been issued whilst the aircraft was in the cruise and which indicated that the expected rain was likely to have begun by the time they arrived. The Operator reported having assessed that this change “was not operationally critical” and the information was therefore not passed to the crew. Had this been done, it would have been received during a period of low workload and would have meant more time to consider the implications and may also have “acted as a primer” for the intermittent information on runway surface conditions subsequently provided by Christchurch ATC.

The possibility that dynamic aquaplaning had occurred was considered and it was noted that the depth of water required to support dynamic aquaplaning can be as low as 2.54 mm for a well-worn tyre, which was the general condition of the aircraft main gear tyres. However, the minimum speeds for this to occur were above those computed for the aircraft after it had crossed the runway intersection. It was noted that the possibility of viscous aquaplaning having occurred was difficult to determine but that it was generally the most likely cause of a loss of braking action on damp or wet runways, especially those with a smooth surface texture and that water only 0.254 mm deep can significantly reduce the coefficient of friction at any tyre speed.

In reviewing all the assembled evidence and analysis, it was concluded that “if a higher level of (auto)braking had been used (‘MAX’ rather than ‘3’), the aircraft would have initially decelerated at a greater rate (and) would have then entered the standing water (encountered) at a slower speed and likely stopped sooner”. It was also noted that whilst the Landing Performance Manual had indicated that runway 29 could not be used for the landing if wet, (contradictory) information in the QRH had indicated that the same runway with ‘good’ reported braking action could be used. It was considered that as the actual landing distance was only marginally less than the runway 29 LDA, the fact that braking action after the intersection was less than ‘good’ meant that the avoidance of an overrun could be attributed to a combination of greater than the target autobrake ‘3’ deceleration rate at first and then the crew's application of hard manual braking and retention of reverse thrust.

The formally-documented Findings of the Investigation were as follows:

There were seven Contributing Factors, three of which were classified as ‘Safety Issues’:

Five ‘Other Factors that increased risk’, one of which was classified as a Safety Issue, were also identified:

Finally, there were three ‘Other Findings’:

The Final Report was released on 18 September 2018. No Safety Recommendations were made.