On 6 August 2013, a Boeing 737-800 encountered cows ahead on the runway after landing normally in daylight following an uneventful approach and was unable to avoid colliding with them at high speed and as a result departed the runway to the left. Parts of the airport perimeter fencing were found to have been either missing or inadequately maintained for a significant period prior to the accident despite the existence of an airport bird and animal hazard management plan. Corrective action was taken following the accident.

On 6 August 2013, a Boeing 737-800 (PK-LKH) being operated by Lion Air on a scheduled domestic passenger flight from Makassar to Djalaluddin as LNI 892 collided with cows which were crossing the landing runway 27 at destination shortly after touchdown in normal daytime ground visibility. Normal directional control could not be maintained and the aircraft eventually veered left off the paved surface at a slow speed and into soft ground where it stopped. The 117 occupants of the aircraft were at this stage uninjured. 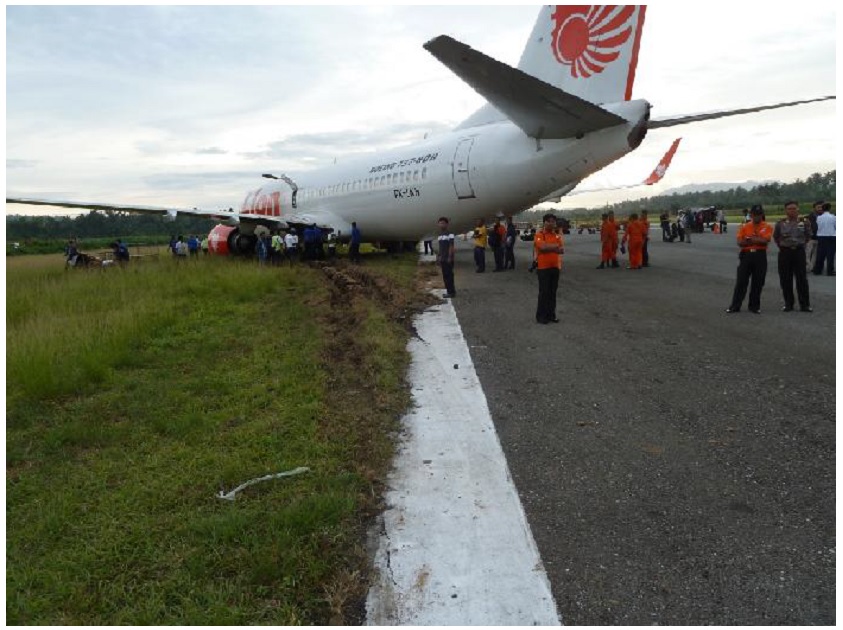 An Investigation was carried out by the Indonesian National Transportation Safety Committee. Data from the FDR and the 2 hour CVR were successfully downloaded and available to assist the Investigation.

It was noted that the weather was not a factor in the accident and that the approach to the 2250 metre long Runway 27 was normal and had been flown with the aircraft commander as PF. It was found that the 'Landing Distance Required' would have normally been around 1510 metres at the prevailing weight that day. Shortly after touchdown, cows were seen crossing the runway ahead and, approximately 550 metres from the landing threshold, some were hit at a speed of approximately 120 knots. Shortly afterwards, a smell of burning meat entered the cabin and braking response became ineffective. With 400 metres to go until the end of the runway, the aircraft departed the paved surface to the left at a slow speed into soft ground. The deceleration after impact with the cows was attributed collectively to the effects of thrust reversers, ground spoilers and the cows "stuck" to the left side main landing gear.

Once the aircraft had come to a stop, ATC were asked if there were any signs of fire (it was advised that there were non) and requested to send the ARFF to assist. The commander made a PA to advise all passengers to remain seated and await further instructions but a few ignored this and evacuated through the right hand overwing emergency exit, as a result of which two of them sustained sprained ankles. The remainder of the occupants subsequently disembarked the aircraft using steps positioned at the right hand side forward and aft service doors.

Inspection of the perimeter fencing found that it was broken or missing for a distance of approximately 500 metres to both the north and south of the runway (see diagram). It was also noted that "there were hundreds of cows just outside the Airport perimeter, especially to the south of the runway" and reported that the people living around the Airport habitually entered the Airport through the broken/missing fences and sometimes crossed the runway.

It was noted that just over a month prior to the accident, Lion Air had carried out a 'hazard identification and risk assessment' in respect of its operations into Djalaluddin but the only hazard it had identified was the risk to aircraft of FOD from areas of broken runway surface including holes. However the findings of an audit carried out by the Airports Directorate 13 days later had found that "some Airport perimeter fences were broken to the extent that animal ingress to the airport was possible and a wildlife hazard to aircraft existed".

It was noted that there had been three other runway incursion accidents at Indonesian airports since the beginning of 2008 which had been attributable to the consequences of broken perimeter fencing.

Safety Action taken by the Djalaluddin Airport Authority following the accident was reported to have been:

The Investigation determined that the Contributing Factors to the accident were as follows: