On 12 May 2019, a Boeing 737-800 making its second procedural ILS approach to runway 25 at Reus came into conflict with an opposite direction light aircraft as the latter approached one of the designated VFR entry points having been instructed to remain well above the altitude which normally ensures separation of IFR and VFR traffic. The collision risk was resolved by TCAS RA promptly followed by the 737. The Investigation concluded that limiting the TWR radar display to the ATZ for controller training purposes had resulted in neither the trainee controller nor their supervisor being aware of the risk.

On 12 May 2019, a Boeing 737-800 (G-GDCF) being operated by Jet2 on an international passenger flight from Manchester to Reus as EXS929 and a Diamond DA20 (EC-KMH) being operated by Aero Link Air Services and being flown by a solo student pilot on a qualifying VFR cross country flight from Sabadell to Reus as ARK1AK came into close proximity in day VMC whilst both inbound to Reus. The collision risk was resolved by the prompt response of the 737 crew to the TCAS RA they received. The minimum lateral separation was 1100 metres and the vertical separation was 200 feet.

A Serious Incident Investigation was carried out by the Spanish Commission for the Investigation of Accidents and Incidents (CIAIAC). Relevant flight data were available from the 737 QAR as was a recording of TWR communications.

It was noted that the B737-800 crew had consisted of a 50 year-old Captain and a 28 year-old First Officer and that DA20 Student Pilot was a 20 year-old Iranian national. It was further noted that the Reus TWR position was occupied by a 23 year old Student Controller under the supervision of a 42 year old OJTI (on-the-job training instructor).

The prevailing weather conditions were CAVOK (cloud and visibility OK) and had no adverse bearing on the conflict which subsequently occurred.

It was established that after making a go around from its first ILS approach to runway 25 at Reus because it became unstabilised, the 737 was on the outbound leg of the ILS ‘Y’ procedure from the overhead (see the corresponding ILS approach chart below) and descending to 3800 feet QNH in order to commence a left turn onto the runway 25 ILS at 13 nm. The position of this turn was close to VRP ‘E’ at Roda de Bará which is used for entry to the Reus CTR by VFR traffic from the east (this point is shown on the second illustration below). Having reached 3800 feet at the end of the procedure outbound leg, the 737 crew received a 4 second long TCAS RA ‘DESCEND’ which then changed to a 12 second long RA ‘CLIMB’. This continued until ‘clear of conflict’ was annunciated at approximately 4400 feet after which they returned to their assigned altitude and continued the approach procedure.

The DA20 had checked in with TWR during its approach to VRP ‘E’ which, according to the Reus Visual Approach Chart published in the AIP, states that CTR arrivals via point E must be made at a maximum altitude of 2000 feet. However, on this occasion, the aircraft had been cleared to enter the ATZ and continue towards Tarragona (which is on the coast to the southeast of the airport and shown on runway 25 ILS chart) maintaining a minimum of 3,500 feet and instructed to report once overhead Tarragona. The reason for this abnormal clearance was a NOTAM’d aerobatic display taking place at that location with a designated “reserved area” up to 3,300 feet and in accordance with the instruction given, the DA20 was actually flying at 3,800 feet QNH when its pilot became aware of the 737. 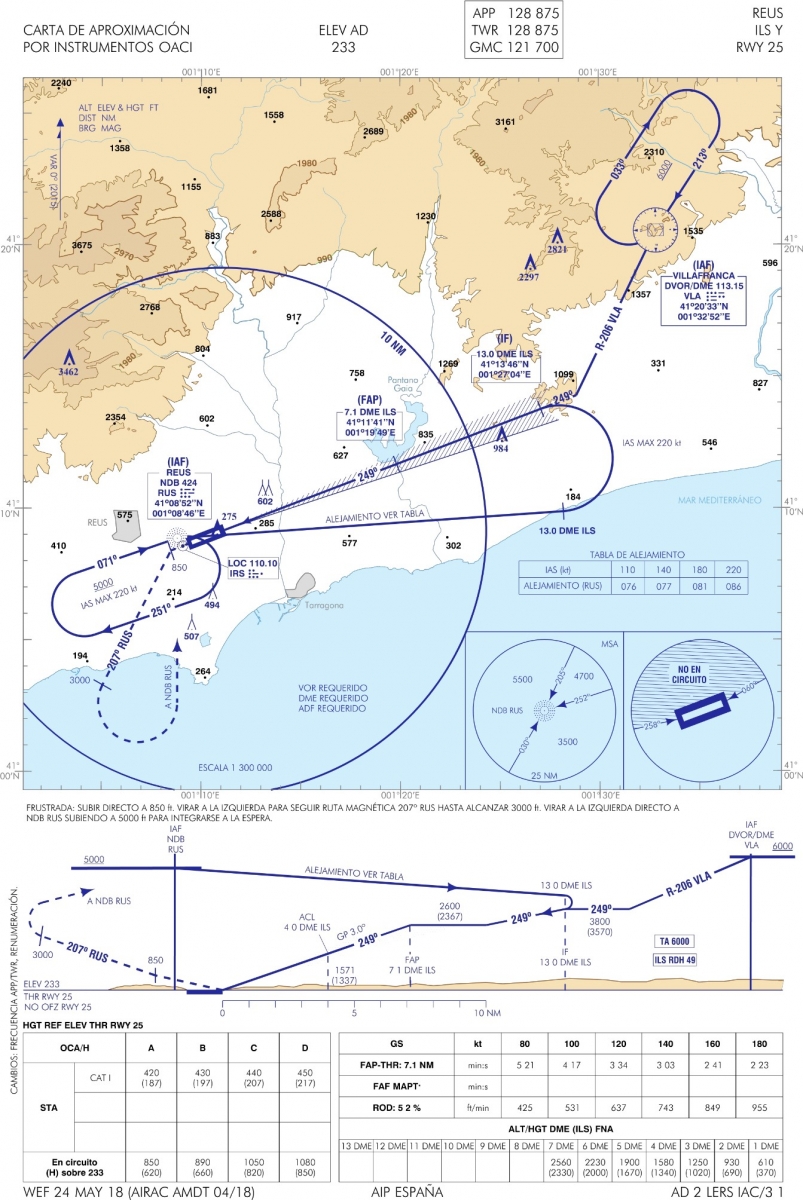 The DA20 pilot subsequently reported having observed the Jet 2 aircraft “crossing his track ahead right to left, climbing out toward the sea” and at the same time, the Reus controller had instructed him to “change course to the right and continue along the coastline”, which he had done. The 737 crew subsequently reported that on the outbound leg of the ILS procedure, they had seen aircraft flying directly towards them some 200 feet lower and had notified ATC of a potential conflict accordingly. They had assumed that since Reus approach control service within the Reus CTR was provided without radar, ATC was not aware of this other traffic. They also thought that “this other aircraft may have been following a route different to that instructed by ATC". When the TCAS RA followed, it was promptly actioned but when TWR was notified, the controller instructed the light aircraft to descend to 2000 feet – within the designated display area. The 737 crew noted that they had seen the other traffic pass underneath on an opposite heading and that “several passengers reported the presence of the nearby aircraft to the cabin crew”.

The controller operating the TWR position was a student under training who was still some way from qualifying. The supervising OJTI had decided for training purposes to set up the TWR radar display to show only the part of the Reus CTR which was also ATZ airspace - that within 8km of the airport up to 3000 feet. He considered this action justified since the Unit Training Plan stated that the approach control service provided at Reus is procedural. Neither the trainee controller nor the OJTI were therefore aware of the potential conflict between the two aircraft and so no traffic information was provided. As a result, the two flight paths converged and five seconds after calling TWR to report sighting traffic 200 feet below, the 737 crew received their TCAS RA. The trainee controller stated that after going around from its first approach, the 737 had been cleared to make an ILS Z approach since the 9nm outbound leg of this procedure would keep the aircraft inside the Reus CTR (although it would involve more time-consuming positioning before it could be commenced). However, when the crew then requested the ILS Y approach, which had a 13 nm outbound leg which would take the aircraft just outside the 12 nm radius CTR, this had been approved and the necessary coordination with the adjacent Barcelona T4 sector controller actioned.

Aspects of the context for the occurrence

With the facts of ATC service and the traffic proximity established, the attention of the Investigation was primarily focussed on the way in which Reus TWR control service was being performed at the time of the event and (separately) how this related to both existing service requirements and the relationship between those requirements and the ways in which they might be able to be improved.

It was noted that despite the Reus CTR being Class ‘D’ airspace, no traffic information on the VFR traffic which the 737 had subsequently encountered had been provided which was contrary to the requirements for control of such airspace. It was also noted that there was no documented procedure for use of the available radar surveillance capability in the Reus CTR which could be used as a support tool for the procedural control provided whether in normal operations or when controller training was in progress.

Procedural approach control service at Reus is provided within the (circular) Reus CTR (upper limit FL075) as depicted in the illustration below with the exception of the part outlined in yellow which is delegated to Barcelona TMA control above 5500 feet. 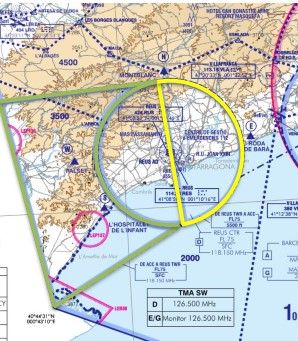 Airspace where procedural approach control service is provided by Reus ATS. [Reproduced from the Official Report]

It is also provided in the area outlined in green below FL075 which is delegated to Reus by Barcelona TMA. It was noted that “although in Reus the approach control service provided is procedural, this does not imply that the ATS surveillance system available in the unit cannot be used in accordance with available provisions in the Spanish Air Traffic Regulation”. It was, however, noted that at the time of the investigated event “there was no specific report on the radar coverage at Reus, although there was a report on the coverage of the Barcelona TMA” but this only provided Reus CTR coverage above “about” 5000 feet.

It was noted that the NOTAM about the air display at Tarragona was valid on the day of the investigated event between 0800 and 1400Z within a circle of 2nm radius up to 3,300 feet. Although all of the designated area was within the Reus CTR, only a small part of it was also within the ATZ and so “the controllers were not aware of the aircraft in this area”. The Investigation considered that although the required procedures for notifying the air display as they existed had been satisfied, the publication of the NOTAM was “not a sufficient safety measure” and “more safety measures are needed when permitting aerobatic flight displays near to airports”.

The response of the TWR controller to advice that the 737 was following a TCAS RA - instructing the light aircraft to descend - was contrary to the ANSP requirement to maintain radio silence in communications to involved traffic following any such communication until at least one aircraft confirms ‘clear of conflict’.

The Cause of the loss of separation formally documented as “the controller under instruction and the instructor controller lost situational awareness of the traffic under their control”.

Safety Action was noted as having been taken by ANSP ENAIRE during the course of the Investigation to clarify in the AIP the situation in regarding the use of radar to provide approach control service at Reus.

The Final Report of the Investigation was approved on 26 February 2020.