On 10 April 2018, a Boeing 737-800 crew making a night takeoff from Brasilia did not see a small aircraft which had just landed on the same runway until it appeared in the landing lights with rotation imminent. After immediately setting maximum thrust and rotating abruptly, the 737 just cleared the other aircraft, an Embraer 110 whose occupants were aware of a large aircraft passing very low overhead whilst their aircraft was still on the runway. The Investigation attributed the conflict primarily to controller use of non-standard phraseology and the absence of unobstructed runway visibility from the TWR.

On 10 April 2018, in night normal visibility conditions, a Boeing 737-800 being operated by Gol on a scheduled domestic passenger flight from Brasilia to São Luís with 160 persons on board began takeoff from runway 11L in accordance with its clearance, but as it approached rotation, the crew saw another aircraft ahead - an Embraer 110 being operated by the Brazilian Air Force on a non-scheduled passenger flight from Santa Cruz to Brasilia ahead which had just landed on the same runway ahead and were only just able to overfly it.

It was established that the Embraer flight had proceeded normally and prior to beginning descent, the Captain had given his approach and landing briefing which included the information that after the touchdown on runway 11L, he intended to clear the runway via the (RET) taxiway ‘F’. After touchdown following an uneventful flight, he was able to slow the aircraft sufficiently quickly to be able to clear the runway at an earlier exit which was intended primarily as an RET for aircraft landing on the runway in the opposite (29R) direction and had begun to steer the aircraft to the right to prepare to use it. He stated that having looked quickly to the right and seen a sign which he believed identified this exit as taxiway ‘C’ (see the illustration below), he had asked his First Officer to request this exit from TWR but the response to her call to that effect was an instruction to “clear onto Taxiway ‘G’ and call GND”.

The Captain stated that he had therefore decided to continue as per this instruction and the First Officer changed to the GND frequency and made her initial call there whilst the aircraft was still on the runway reporting that they would clear the runway via ‘G’. The GND Controller acknowledged this and cleared the flight to continue to the military apron. However, the Embraer crew then saw that the next exit was signed as ‘F’ and not ‘G’ and the First Officer therefore called GND to request permission to clear at ‘F’ instead of ‘G’. 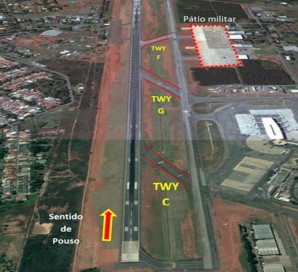 Runway 11L annotated with the exits mentioned and the position of the military apron. [Reproduced from the Official Report]

The TWR Controller had been in position for approximately 1¼ hours when the investigated event occurred and stated that he had not been expecting a call from the aircraft after landing and when he received one, he considered that the transmission was made rather quickly which had made it difficult to understand. He noted that after a landing at a controlled aerodrome such as Brasilia, the first radio contact is normally initiated by TWR rather than an aircraft which has just landed. He stated that based on his experience, the message he received was a "ground controlled" matter and so he had continued with his plan to have the aircraft leave the runway on taxiway ‘G’) and call the GND frequency. He had then turned his attention to the 737 awaiting takeoff and, having “made a brief visual scan without seeing the just-landed aircraft, he concluded that it had cleared the runway, since it had already been very close to taxiway ‘G’”. He remarked when he had issued takeoff clearance to the 737, the identification of aircraft on the runway was, as usual at night, hampered by the number of lights on the aerodrome and that this difficulty was aggravated in the case of aircraft which, like the Embraer involved, were camouflaged and without strobe lights.

The GND Controller commented that based on routine practice, a military transport aircraft such as an Embraer 110 would clear runway 11L on taxiway ‘G’ and then take taxiway H’ to reach the military apron. As he had expected this to happen, he had turned his attention to the control of other aircraft. Only when contacted by the Embraer crew requesting to clear onto taxiway ‘F’, did he realise that it was not on the military apron as he had expected and he had then approved the request.

As the Embraer continued towards taxiway ‘F’, its occupants reported they “suddenly perceived a very intense light coming from outside, accompanied by an extremely loud noise and a strong vibration”. As they looked out, some of the occupants reported having seen the 737 that had just passed over their aircraft whilst it was still on the main runway.

The 737 crew noted that they had been waiting for the Embraer to land before receiving their takeoff clearance and that use of 11L for their takeoff was normal for aircraft leaving the northern part of the terminal. They noted that after the Embraer had landed, TWR had instructed them to line up and wait at the runway threshold. Then, “approximately 1 minute and 15 second later” the same controller had cleared them for takeoff. Just before they reached VR, their landing lights had illuminated the Embraer ahead still on the runway and the Captain had immediately advanced the thrust levers to TO/GA and begun to rotate and had just managed to overfly the other aircraft. Once airborne, they reported the near miss to TWR.

Based on the factual evidence, the Investigation defined seven relevant ‘Latent Conditions’ which had existed at the time of the conflict as follows: 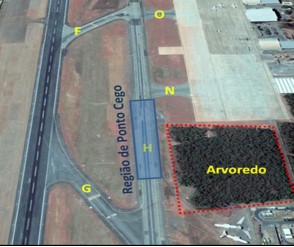 The area of trees (arvoredo) which prevented controllers from seeing smaller aircraft on the shaded area of taxiway ‘H’. [Reproduced from the Official Report]

The absence of a Surface Movement Radar which could provide aircraft position information to controllers was also noted as was the absence from the aerodrome chart of any ‘hot spot’ designation of controller visual blind spots to alert pilots to the existence of this problem. It also proved impossible to identify any regulations that clearly specified when pilots should change frequency from TWR to GND after landing.

It was considered that the evidence available indicated that neither Embraer pilot had been sufficiently familiar with the exit options for their landing runway. A lack of real-time monitoring of the aerodrome chart by the First Officer “may have contributed to an incorrect perception of the aircraft position on the ground after landing” and thereby to her lack of independently informed assistance to the Captain in respect of runway exit identification.

Actual Contributory Factors were, in summary, identified as follows:

Potential Contributory Factors were also identified, in summary, as follows:

Safety Action taken by the Military Authorities as a result of the investigated event was noted as the issue of instruction that all Operational Manuals must include text stating that after landing, crews may only change frequency from TWR to GND after clearing the active runway.

The Final Report was completed on 18 December 2020 and published online in both an English translation and in the definitive Portuguese language on 2 January 2021.