On 11 October 2012, the crew of a Ryanair Boeing 737-800 did not change frequency to TWR when instructed to do so by GND whilst already backtracking the departure runway and then made a 180° turn and took off without clearance still on GND frequency. Whilst no actual loss of ground or airborne safety resulted, the Investigation found that when the Captain had queried the receipt of a take off clearance with the First Officer, he had received and accepted a hesitant confirmation. Crew non-compliance with related AIP ground manoeuvring restrictions replicated in their airport briefing was also noted.

On 11 October 2012, a Boeing 737-800 (EI-DLD) being operated by Ryanair on a scheduled passenger flight from Eindhoven to London Stansted did not follow its pre-take off taxi clearance and did not change to TWR when instructed. Without further communication, it then took off from runway 04 in day VMC without clearance. No actual loss of ground or airborne safety resulted.

An Investigation was carried out by the Dutch Safety Board with reference to the aircraft Cockpit Voice Recorder (CVR) and the Voice Logging System in ATC. It was noted that the airport is a Royal Netherlands Air Force (RNAF) base regularly used by civil transport aircraft at which ATS is provided by RNAF controllers. 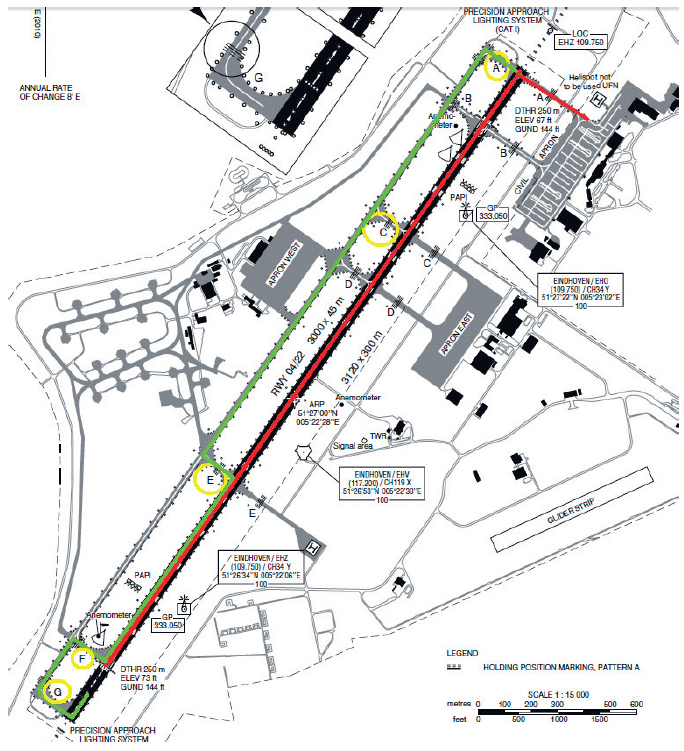 The aerodrome layout with the initial taxi clearance in green and the subsequently approved backtrack around the closed taxiway between ‘E’ and ‘F’ in red. (Reproduced from the Official Report)

The clearance onto the runway for taxi purposes was given by GND contrary to standard ATC procedures which require that TWR rather than GND control all access to an active runway. Once backtracking and approximately halfway down the runway, the crew requested and received their departure clearance. When the aircraft reached intersection ‘F’, where the crew should have turned right onto the last section of the parallel taxiway in order to approach the holding point at ‘G’ and await take off or line up clearance from TWR, the GND controller transmitted “this one to the right, and for departure contact TWR, 131,10, good flight”. The aircraft was then observed to carry out a 180° turn to the right on the runway and immediately begin and complete take off without clearance. The aircraft became airborne and no actual risk to safety occurred whilst the aircraft was on the runway or in the air.

The Investigation found that the CVR download disclosed some uncertainty about the intended take off in an exchange between the pilots which it was considered may have been prompted by the GND controller’s inclusion of the phrase ‘good flight’ so that when the Captain challenged the First Officer in an attempt to confirm that a takeoff clearance had been given, he responded, after some hesitation, with “we are cleared takeoff, yeah, it’s after airborne contact tower in the air, I think that was it” which was accepted by the Captain as stated.

It was noted that both crew members considered themselves well rested prior to beginning their duty that morning and that Ryanair had flights scheduled into Eindhoven several times each day. The Company airfield brief accessible to the crew contained selected AIPs information including the prohibition on 180° turns anywhere on the runway but they had not noticed this.

The failure of the GND controller to use certain elements of standard phraseology including “vacate” as the backtracking aircraft approached point ‘F’ was also noted.

It was confirmed that the work in progress which meant the taxiway section from ‘E’ to ‘F’ was going to be closed had commenced two weeks earlier and correct Notice To Airmen action had been taken. Details of it and the changes to normal taxi procedures were also being included in the Automatic Terminal Information Service (ATIS) broadcast.

The Conclusions of the Investigation were as follows:

It was also noted that since the only parallel taxiway at Eindhoven Airport is situated on the west side of the runway, 04 departures require that the active runway must be crossed upon leaving the apron which serves the civil passenger terminal. Taxiing traffic should, according to the rules, switch from GND to TWR for the crossing and then back to GND when instructed. Since such an arrangement would create extra workload and radio traffic for the crew and ATC, it was considered understandable that traffic crossing the active runway when taxiing routinely stay on the GND frequency. However, the Investigation considered that traffic crossing (or backtracking) the active runway should be under control of TWR in accordance with standard procedures - but no corresponding Safety Recommendation was made on this subject.

The Final Report was published in English translation on 11 July 2013.