On 22 August 2019, the left engine of a Boeing 737-800 failed for unknown reasons soon after reaching planned cruise level of FL360 twenty minutes after departing Samos, Greece and two attempted relights during and after descent to FL240 were unsuccessful. Instead of diverting to the nearest suitable airport as required by applicable procedures, the management pilot in command did not declare single engine operation and completed the planned flight to Prague, declaring a PAN to ATC only on entering Czech airspace. The Investigation noted that engine failure was due to fuel starvation after failure of the engine fuel pump.

On 22 August 2019 the left engine of a CFM56-7 powered Boeing 737-800 (OK-TVO) being operated by Smartwings on an international passenger flight from Samos, Greece to Prague as TVS 1125 failed soon after it reached the planned cruise level of FL360 in day VMC. A descent to FL240 was made and two relight attempts failed. The flight was nevertheless completed as originally intended without ATC awareness of single engine operation and passing many airports suitable for a precautionary diversion on the way with a ‘PAN’ only declared on entering Czech airspace. 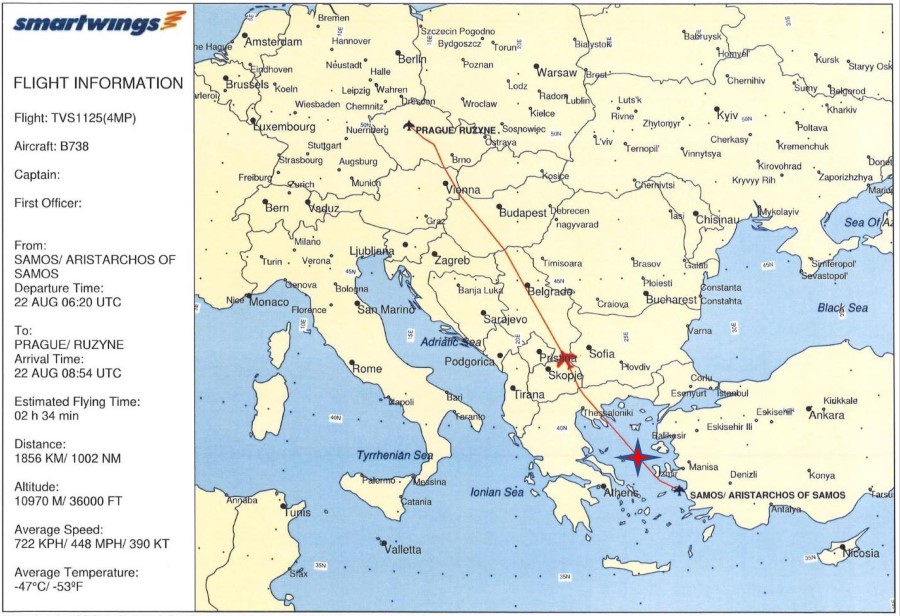 The ground track of the flight showing the point at which the left engine failed. [Reproduced from the Official Report]

An Investigation into the Serious Incident was carried out by the Czech Air Accidents Investigation Institute (AAII) Commission which comprised four members and acted in accordance with ICAO Annex 13 principles. It “based its investigation on two internal Final Reports delivered by Smartwings”. The first of these was Final Report (revision 0) issued on 5 September 2019 and the second was Final Report (revision 3) issued on 6 February 2020. It was noted that various information about the flight was contained in statements given by the flight crew and the Senior Cabin Crew Member (SCCM), company engineering personnel and on duty air traffic controllers. Transcripts of relevant ATC communications were also available. It was noted that “the evaluation of safety and operational aspects of air traffic urgency communication was provided by the Czech ANSP” and the Commission evaluated the evidence in relation to the “particularly serious faults on the part of the flight crew”.

On arrival at Prague and prior to the commencement of an Investigation, attending engineers, aware of the en route engine failure, removed the Digital Flight Data Acquisition Unit (DFDAU) which was subsequently passed to the Investigation. They took no action to isolate the CVR and subsequently claimed that such action required the “supervisor’s” authority which they did not have. It was also noted that the Captain did not instruct them to do so or take such action himself and its relevant data was therefore overwritten.

The 53 year-old Training Captain in command, who was also the aircraft operator’s Flight Operations Post Holder, had 20,980 hours flying experience of which 8,065 hours were on type. He was also a 737 Type Rating Instructor (TRI) and Type Rating Examiner (TRE). The 35 year-old First Officer, who was PF for the flight, was an Airline Transport Pilot's Licence (ATPL) holder with a total of 3,400 hours flying experience which included 2,488 hours on type.

The flight involved was the second of the day for both pilots and followed an outbound Prague-Samos sector followed by a quick turnround. The TOW was 66.7 tonnes, well within the MTOW which was in excess of 70 tonnes. A reduced thrust takeoff from runway 09 at Samos and the subsequent climb were uneventful with both engines operating normally. However, after reducing engine thrust very slightly on reaching FL 360 with both engines briefly stabilising, the left engine N1 began to decrease and it then flamed out. Less than two minutes later, with the speed having reduced to a recorded 226 KCAS with only right engine maximum continuous thrust (MCT) set, it became necessary to begin a descent. This was commenced without ATC contact having been achieved and without offset but eventually the need to descend “for technical reasons” was communicated and a request to descend to and continue the flight planned route towards the intended destination at FL 240 was approved.

Once the airspeed increased sufficiently in the descent, a relight of the left engine using autorotation was attempted but was not successful. Once level at FL 240, a second attempt to restart the left engine using cross bleed air was made but this was also unsuccessful. Just over half an hour after the left engine had stopped, the Captain advised the company OCC by ACARS of the engine failure, the two unsuccessful attempts to restart it and his intention to complete the intended flight but he did not also communicate this information to ATC. It was noted that there were no weather considerations which would have ruled out a diversion to a range of suitable airports but no assessments of such diversion possibilities were made either immediately after the failure or as the flight continued towards Prague.

There was a lack of clarity about how fuel endurance on one engine operating at MCT was calculated and it was not recorded on the operational flight plan and when asked, the Captain “did not remember the final reserve fuel figure used for trip pre flight planning". He stated that he had been aware that the procedure in the Performance Chapter in the OM ‘B’ stated that in the event of engine failure, “the pilot shall reach a reserve airport at best within one hour” but stated that “one hour is not considered mandatory”.

Shortly after entering Czech airspace and making contact with Prague ACC, the Captain declared a ‘PAN’ and confirmed that all that was required was a RFFS “Local Standby” for arrival. After 2 hours 40 minutes airborne, all but 20 minutes of it with only one operative engine, the flight touched down on runway 06 at Prague. It then cleared the landing runway onto taxiway ‘B’ where it stopped and the right engine was shut down. Company engineers were the first to board and all passengers were subsequently bussed to passenger arrivals.

The Investigation noted that when the Captain was asked whether he could, in retrospect, now see some of his mistaken judgements which he would like to explain, he replied “when looking back and assessing my flight performance, I am convinced that flight safety was not jeopardised”. In his written statement, he also said that “his decision-making had not been affected by financial aspects (and) that his reasoning was operation-oriented - if he could make it to the airport without breaching anything nor endangering anybody and with the fuel he had, he saw no reason why not to fly as far as to the final destination”.

The First Officer stated that the Captain alone had determined that FL 240 was appropriate in order to achieve “Long Range Cruise Altitude Capability” - the Investigation subsequently calculated that FL 220 was the correct level. The First Officer also stated that he had asked for the implementation of the Non-normal Checklist procedure and it had been followed. However, he qualified this by stating that the Captain did not tell him that they would be continuing to Prague until after he had finished talking to the OCC and had not shown him the calculations made, just told him the result i.e. “that they would make it, as a matter of fact”. After hearing this, the First Officer stated that he had unsuccessfully “tried to reverse the Captain’s decision by requiring another reading of the QRH Non-normal Checklist in order to confront him with the last item in that checklist” which he regarded as “binding”. He could not recall any discussion with the Captain of en route airports in terms of suitability for a precautionary landing.

The failure was found to be due to the malfunction of the engine’s fuel pump which had run dry after lubrication by fuel had ceased. The fuel filter downstream of the pump was found to be clogged with swarf and fragments originating primarily from the pump but this filter problem was a consequence rather than the cause of fuel pump failure. Likewise, the fuel nozzle filter was also not the cause of pump failure. It was concluded that whilst the reason for the fuel pump running dry could not be determined, it was clear that the accumulation of debris created directly by its malfunction were the cause of the fuel starvation.

The Investigation reviewed all relevant procedures, regulatory requirements and guidance and concluded that all pointed to the fact that a “nearest suitable airport” diversion should have been flown. There was extreme concern that the Captain involved was unable to recognise his decision-making failure or the unduly authoritarian way he had exercised his command which had been completely contrary to the operator’s CRM Assessment Handbook policy which he had personally signed off in his capacity as the Flight Operations Post Holder. It was concluded that the Captain’s “defective decision-making process” had not only endangered the safety of his own aircraft but had also decreased the safety of other air traffic.

It was concluded that it had been impossible to satisfactorily prove what level of influence the management culture in Smartwings had on the decision-making process of the Captain. It was also not possible to satisfactorily prove whether or in what way the Captain had been influenced in his in-flight decision-making process by “corporate financial aspects linked with the re-entry of the aircraft into operation after an engine failure”. It was therefore considered that “it cannot be rationally inferred why there was a discrepancy between the following of stipulated obligations when exercising the functions of an aircraft commander and the Captain’s personal decision to continue single engine operation all the way to Prague”. Certainly, “the Captain’s decision-making process was not in accordance with the binding procedures stipulated in the OM”.

The Final Report of the Investigation was “issued” on 29 June 2020 and released in English translation on 27 November 2020 after the publication of the definitive Czech language version on 23 July 2020.