On 26 October 2010, an All Nippon Boeing 737-800 was radar vectored towards mountainous terrain and simultaneously given descent clearance to an altitude which was 5000 feet below the applicable MVA whilst in IMC without full flight crew awareness. Two TAWS PULL UP hard warnings occurred in quick succession as a result. The flight crew responses were as prescribed and the subsequent investigation found that the closest recorded proximity to terrain had been 655 feet. It was established that the controller had forgotten about MVA.

On 26 October 2010, a Boeing 737-800 being operated by All Nippon AW on a scheduled passenger flight from Chubu Centrair to Asahikawa in day Instrument Meteorological Conditions (IMC) was being radar vectored towards an eventual ILS approach at destination when two GPWS/TAWS PULL UP Warnings were activated in quick succession and a recovery climb made. None of the 57 occupants were injured during the occurrence and the aircraft was subsequently vectored to the destination ILS without further event.

An Investigation was carried out by the Japan Transport Safety Board (JTSB). Cockpit Voice Recorder (CVR) data had been overwritten but DFDR and ATC R/T recordings were available and a successful download from the non volatile memory (NVM) in the TAWS unit was achieved. It was noted that although thirteen “busier” Japanese airports had been provided with Minimum Safe Altitude Warning (MSAW) prior to the investigated event, this system was not installed at Asahikawa.

It was found that as the aircraft had descended in IMC in accordance with a clearance to 5000 feet under ACC radar vectors, the forward-looking element of TAWS had generated a ‘Caution Terrain’ Alert as the aircraft reached approximately 6800 feet and was approximately 3200 feet above terrain below the aircraft. This had been quickly followed by a “TERRAIN, PULL UP” Hard Warning after which a climb was immediately commenced and the turn which was in progress towards a new radar heading was stopped. When the warning ceased with the aircraft 2200 feet above terrain, the pitch attitude was relaxed slightly whilst the climb was continued and the turn was resumed. However, within 30 seconds of the first PULL UP Warning beginning, another one occurred, this time generated by the TAWS Mode 2 function indicating an excessive terrain closure rate. The pitch attitude was again increased and the proximate terrain again remained unseen. It was subsequently established that on this second occasion, the aircraft had come to within as little as 655 feet of terrain in the vicinity of Mount Pippu which has a summit elevation of 7208 feet. 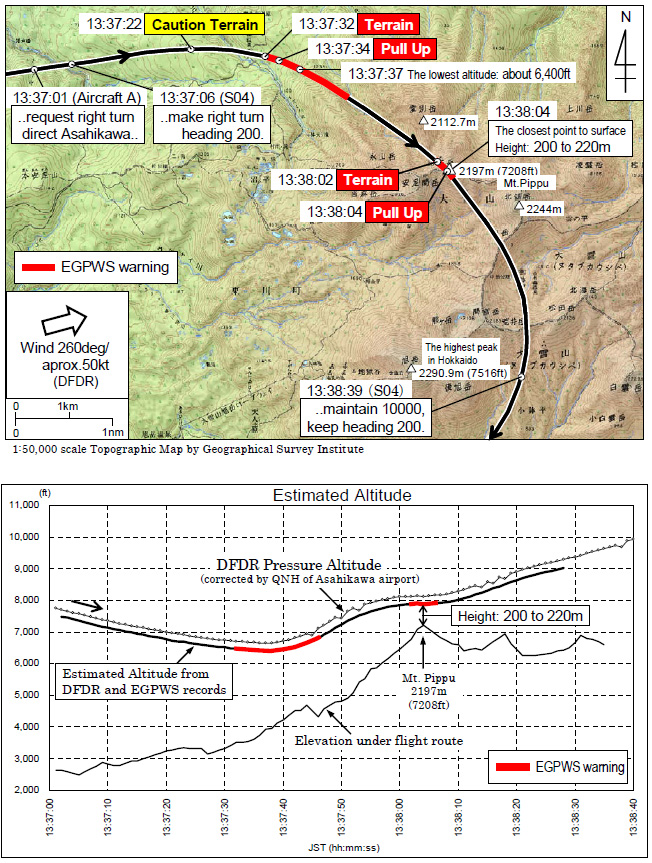 The track of the flight showing the two periods when it was below MVA whilst under radar control are shown in the diagram below also taken from the Official Report. 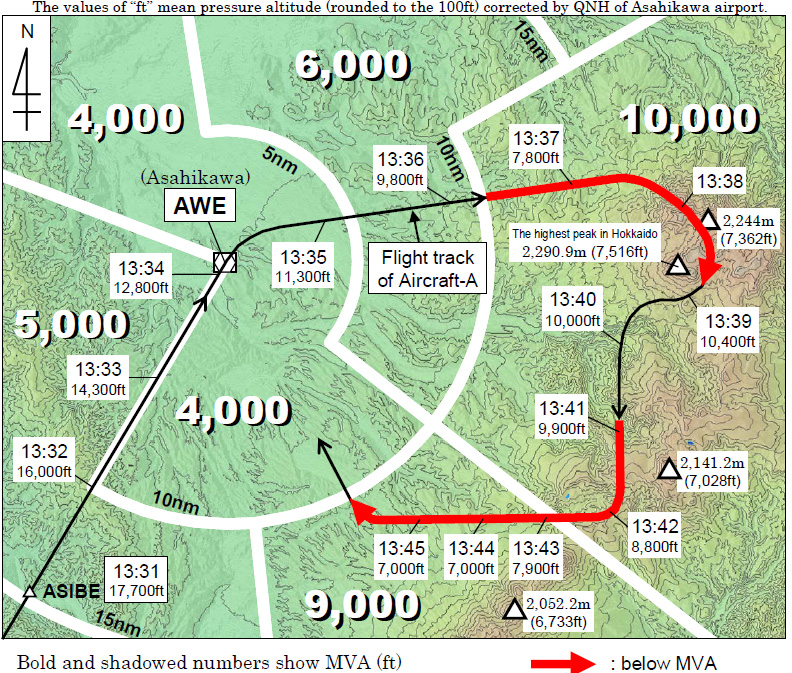 Minimum Vectoring Altitude (MVA) in the vicinity of the serious incident site (Source: the Final Report of the Investigation

It was established that the aircraft had been under ACC radar control inbound to destination and that the controller involved had ‘forgotten’ about the applicable NMVA of 10,000 feet amsl when issuing a descent clearance to 5000 feet amsl on a radar heading which would be guaranteed to take the aircraft towards terrain with tops up to around 7500 feet amsl. It was considered that as the Coordinator supporting the incident controller’s position had not noticed the error either, “it is possible that lack of effective cooperation between the Radar Controller and (their) Coordinator led to their failed correction of the inappropriate descent instructions”. Accordingly, it was deduced that “Team Resource Management (TRM) training needs to be improved so that.... controllers… fully cooperate with each other”. It was noted that although in many other countries, MVAs are published, in Japan this is not so.

The poor cooperation between the two pilots in respect of situational awareness as the incident situation developed was discussed. It was concluded that both pilots had recognised that the aircraft was flying east toward a mountainous area on the given radar heading and were reluctant to do it. It was considered “highly probable that they did not talk about the situation with each other”. It was considered highly probable that at the time of the TAWS activation, both had selected the WXR mode on their ND because of the prevailing bad weather but noted that if either of them had selected the ND terrain mode, it is possible that they would have detected the ground proximity risk sooner. It was also considered that “since the First Officer had selected the optional Vertical Situation Display (VSD) on his ND, it is probable that with effective CRM in action, proximity to the terrain so close as to lead to a TAWS activation would not have occurred.

It was noted that the First Officer had stated to the Investigation that “he had a belief that a First Officer should play his/her part in a modest manner without violating other’s turf in the cockpit and that the important decisions are left to the PIC”. It was concluded that this might well explain why the First Officer had not given any useful advice to the PIC in this incident. However, it was noted that in the Crew Resource Management training previously completed by both pilots, they had been urged to “speak openly without hesitation”, and “frankly state your view”, and instructed that “speaking openly at an earlier stage leads to preventive actions”. Whereas when the aircraft was vectored toward the mountainous area and directed to descend to a lower altitude, neither pilot had “expressed their views openly or talked about the situation with each other”. It was concluded that “they did not fully practice what they had learned in the CRM training”.

The Investigation does not appear to have directly considered the question of awareness or otherwise on the part of either pilot of the applicable MSA in the area where the incident occurred or their primary responsibility for maintaining safe separation from terrain.

The Probable Causes of the Serious Incident were determined by the Board as follows:

Various Safety Actions taken in response to the event by both the ACC and All Nippon AW were noted but no Safety Recommendations were made. The Final Report of the Investigation AI2012-1 was adopted on 13 January 2012 and published on 27 January 2012.