On 12 July 2018, a Boeing 737-800 was climbing through FL135 soon after takeoff from Sydney with First Officer line training in progress when the cabin altitude warning horn sounded because both air conditioning packs had not been switched on. The Captain took control and descended the aircraft to FL100 until the situation had been normalised and the intended flight was completed. The Investigation noted that although both pilots were experienced in command on other aircraft types, both had limited time on the 737 and concluded that incorrect system configuration was consequent on procedures and checklists not being managed appropriately.

On 12 July 2018, a Boeing 737-800 (VH-VUB) being operated by Tiger Airways on a scheduled domestic passenger flight from Sydney to Melbourne during daylight hours on a line training flight for the First Officer was passing FL 135 in the climb approximately 6 minutes after takeoff when the cabin altitude warning horn sounded. The trainee First Officer immediately recognised that both air conditioning packs were switched off and selected them to on and the Captain took control and descended the aircraft to FL100 until pressurisation was normalised after which the flight was completed without further event.

An Investigation was carried out by the Australian Transport Safety Bureau (ATSB). Data were retrieved from both the FDR and CVR but only that from the former was analysed. These data confirmed that although both engine bleed switches had been ‘on’ from takeoff, both air conditioning packs had been ‘off’ throughout that time. FDR parameters did not include cabin altitude but it was considered that since the cabin oxygen masks had not automatically deployed, it was unlikely to have exceeded 14,000 feet.

It was noted that the Captain had a total of 21,511 flying hours which included 949 hours on type. He had joined the operator six years previously as a direct entry A320 Captain having had previous airline experience as an A320 Training Captain and had subsequently been promoted to that role before being moved to the Boeing 737 in 2016 as part of the operator’s introduction of the type. His 737 type rating had been followed by completion of line training eighteen months prior to the investigated event and two months later, he had commenced instructional duties on type. The First Officer had a total of 18,300 flying hours which included 27 hours on type. Prior to joining the operator and commencing his 737 type rating and line training, he had not flown at all for two years but was an experienced pilot who had previously flown away from Australia as a Captain on other types which included the Boeing 767 and Boeing 777. His 737 line training had commenced four months prior to the investigated flight with five sectors in a Full Flight Simulator (FFS) after which actual flying training had commenced three weeks prior to the investigated flight, which was his 12th line training sector. In accordance with the operator’s standard minimum requirements, a Safety Pilot had been present for the first eight sectors after which their presence had been assessed as no longer required.

It was established that both air conditioning packs had been switched off in line with the applicable SOPs for engine start. The ‘Before Taxi’ memory procedure followed engine start and although this included the First Officer selecting the air conditioning packs from OFF to AUTO, this was not done and the Captain did not notice. Completion of this procedure required the Captain to call for the ‘Before Taxi Checks’. These, however, do not include a check of the position of the pack switches. However, the Captain recalled that “at about the same time as the commencement of the procedure they (had) discussed the method of confirming (that) the ground crew had removed the steering bypass pin” in respect of an inconsistency between the flight crew and ground crew manual procedures and the fact that “the ground crew expect a certain procedure for confirmation that (flight) crew have acknowledged it’s removal” which might well have constituted a distraction. Takeoff subsequently occurred without the switches being reset to ‘ON’ and without either pilot noticing.

Once airborne, the (after) takeoff procedure, which should begin after the flaps are fully retracted, called for the PM to complete four actions, the first of which was to “set or verify engine bleeds and air conditioning packs are operating” and after these were complete, the After Takeoff checks should run. These checks were read out and responded to by the PM and also responded to by the Captain and included a requirement for both pilots to make an explicit check on the position of the pack switches. On the departure in question, they were actioned at about the same time as a series of instructions were given by ATC involving cancellation of the SID, re-clearance to climb to FL 280 and to fly a radar heading which was then almost immediately replaced by a “direct to” clearance. Neither pilot detected the incorrect pack switch position. The Captain recalled “rushing” the after takeoff checklist so as to discuss how to mitigate the “traffic threat” associated with the noise abatement departure procedure being flown with particular regard to the high rate of climb required relative to their initially cleared altitude of 5,000 feet. He also stated that when the check item including the packs switching status was called, he remembered “looking at the pack switches and the cabin altitude and differential gauges” and noting that the gauge readings were “as expected” and not identifying that the pack switches were set to ‘ OFF’. It was noted that the fact that the pressurisation controller was observed to be correctly set and had closed the outflow valve was likely to have led to a natural temporary delay in the cabin altitude beginning to rise, giving the Captain a misplaced impression that if the pressurisation system was working normally, there was no reason to suspect that the pack switches might be OFF. The First Officer explained that his workload in flying the aircraft during the busy departure had prevented him from making the check, the last formal one of pack selection status.

About six minutes after takeoff as the aircraft was passing 13,500 feet in the climb, the cabin altitude warning horn sounded. The First Officer saw that both packs were off and immediately switched the selector to auto and the Captain then took over control and selected ‘altitude hold’. The aircraft reached a maximum height of 14,900 feet two minutes later whereupon the Captain disengaged the AP and began a descent to 10,000 feet, during which the warning ceased. It was reported that both pilots had donned oxygen masks in accordance with the cabin altitude warning procedure “during this time”. Once level at 10,000 feet, the remainder of the cabin altitude warning checklist was completed and, as the cabin pressure was by then under control, the planned flight was continued without further event.

It was noted that the air conditioning and pressurisation system panel was in its ‘usual’ location above the First Officer’s position and that the view of position selected on the three-position pack switches for a pilot seated on the left hand side may be inadequate unless the occupant moves specifically to view them, since their view is a sideways one of switches which are routinely selected between the up (OFF) to the centre (AUTO) position or occasionally to the lower (HIGH) position (see the illustrations below).

In terms of the general checklist philosophy for trapping the potential crew error of climbing after takeoff without the packs on, it was noted that there is a supplementary procedure to cover a no engine bleed or unpressurised takeoff which requires reconfiguration of both the bleeds and the packs after takeoff so that the primary check of pack status was actually the after takeoff checklist which Boeing advised was also where any unintentional packs-off takeoff would be detected. Consequently, the Investigation did not regard the absence of a similar check in the after start checklist as contributory. 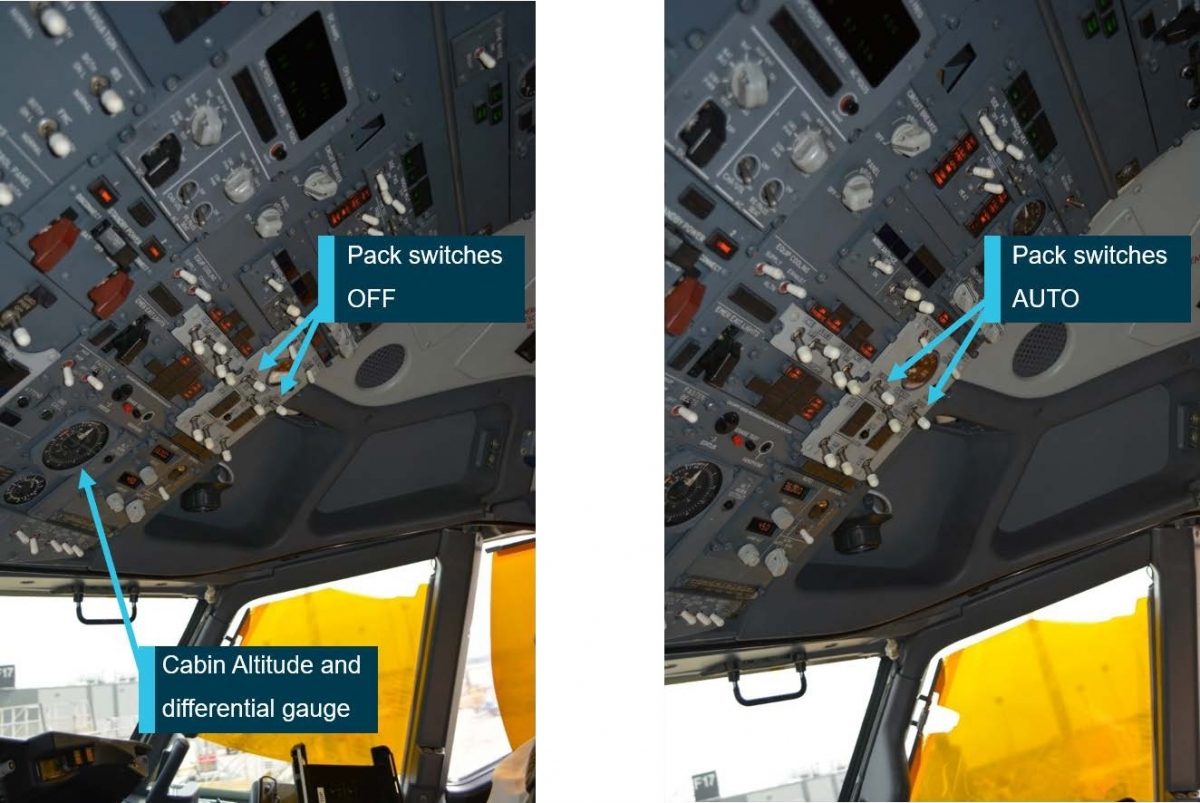 Annotated views of the pack switches in the off and auto position as viewed from the left pilot seat. [Reproduced from the Official Report]

It was noted that the ATSB had previously investigated three other similar events but, as in the current case, although an incorrect system configuration was not identified despite multiple procedures and checklists, the crew had in each case immediately recognised the cabin altitude warning and had responded accordingly, in contrast to such a takeoff ending in a fatal accident to another 737 in 2005.

Two Contributory Factors which led to the event were identified as:

Safety Action taken by Tiger Airways as a result of the event and known to the Investigation prior to its completion was noted as having included the following:

The Final Report was released on 30 September 2019. No Safety Recommendations were made.