On 25 February 2013, a Boeing 737-800 about to commence descent from FL390 began to climb. By the time the crew recognised the cause and began to correct the deviation - their unintended selection of a inappropriate mode - the cleared level had been exceeded by 900 feet. During the recovery, a deviation from track occurred because the crew believed the autopilot had been re-engaged when it had not. The Investigation noted the failure to detect either error until flight path deviation occurred and attributed this to non-compliance with various operator procedures related to checking and confirmation of crew actions.

On 25 February 2013, a Boeing 737-800 (VH-VYE) being operated by Qantas Airways on a scheduled domestic passenger flight from Canberra to Brisbane at night was in the cruise at FL 390 when the aircraft unexpectedly began to climb. The autopilot was disconnected and a descent back to the cleared level was commenced but after the crew subsequently believed that the autopilot had been re-engaged when it had not, the aircraft rolled left and also deviated from track. Control was subsequently regained and the remainder of the flight was uneventful.

The Australian Transport Safety Board (ATSB) investigated the event making use of successfully downloaded recorded flight data. Both members of the flight crew had significant experience on the Boeing 737 type - in the case of the Captain, nearly 15,000 of his 17,770 total flying hours and in the case of the First Officer, 6670 of his total 10,230 flying hours. The Captain was PF for the incident sector but at the time of the deviation from clearance was taking a meal break and had handed control of the aircraft to the First Officer.

It was established that almost immediately after being cleared to begin descent when ready from FL390 to F300 - and before action to commence that descent had occurred - the aircraft unexpectedly began to climb. The crew initially reported checking the MCP and attempting to change the vertical mode but after 26 seconds, the PF disconnected the AP and manually began a descent from FL399. ATC were advised of the deviation to 1000 feet above the cleared level due to an "autopilot issue" and the crew both believed that the AP had then been re-engaged, although the recorded data showed that it had not. During the recovery descent, the crew de-tuned the Brisbane ILS frequency (which was the same as Canberra and had remained selected following compliance with the SOP to have it set for departure) so that they could deactivate the GS mode and select VS. The aircraft then began to bank left because of a small residual rudder reflection which had previously been compensated for by the AP. The First Officer, still PF and believing that the AP was engaged, changed the selected HDG in an attempt to stop the turn but the bank and the consequential deviation left of track continued. ATC were advised of "a lateral navigation problem". After approximately 1 minute 20 seconds, the crew realised that the AP was not engaged and the First Officer began a right turn to regain the cleared track. Soon after this, the AP was re-engaged and the Captain took over as PF. The rest of the flight was uneventful.

Using recorded flight data, the Investigation found that shortly after reaching cruise level, the APP mode had been manually selected on the MCP by one of the crew. This action would have illuminated a green dashed light on the APP push-button and GS and VOR/LOC annunciations would have lit up on the FMA, which is located on the PFDs of both pilots. The effect of the selection was to arm GS and VOR/LOC modes so that they would become the active modes as soon as the aircraft met the capture requirements for any ILS frequency selected. As already noted, the frequency selected was that of the destination runway ILS as well as the departure runway ILS.

After a little over 40 minutes at cruise altitude, the unexpected (because the earlier crew selection of APP mode had not been intentional) climb began because the aircraft navigation system had captured the Brisbane ILS GS so that the AP began to climb the aircraft in order to intercept and track the glideslope beam. At this time, the aircraft was about 115 nm south of the Brisbane ILS GS transmitter and 29 nm to the right of the extended runway centre line. Although the ILS LOC signal was sensed, it was not captured because the aircraft position placed it outside the criteria for capture, which depend on both intercept angle and closure rate. It was calculated that the altitude at which an aircraft could be considered on the ILS GS at that range from Brisbane should be about FL 488, but it was found that because of atmospheric refraction of the GS beam, the actual ‘on slope’ altitude had been FL 398.

A scale diagram depicting the vertical flight profile is provided below. 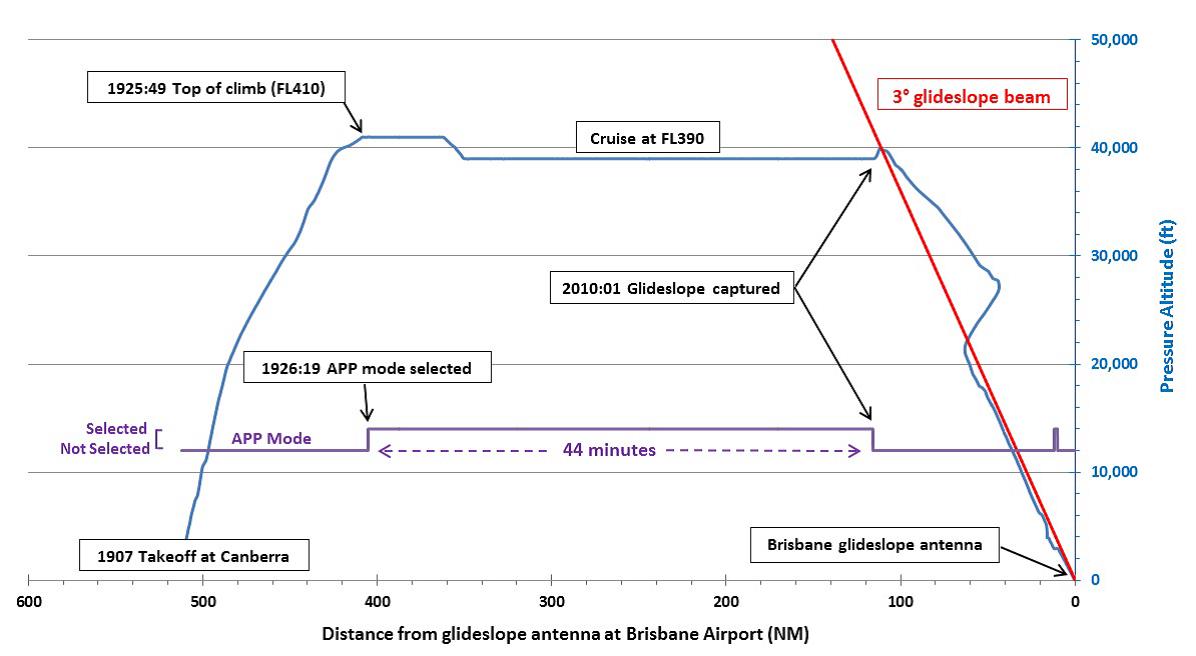 The recorded vertical flight path of the aircraft showing key events (Reproduced from the Official Report - note that the 'Glideslope Captured' time on this illustration is incorrect - it should read 2110:01)

It was noted that according to the flight crew, prior to their calculated top of descent point i.e. prior to the expected climb, they had carried out the prescribed FCOM pre-descent procedure and further noted that this required the crew to:

The Investigation noted that neither Qantas nor Boeing were aware of any previous ILS GS capture during cruise flight and that Qantas had re-examined their data on 200,000 737 flights and had not found any previous occurrences where the APP mode was armed with the AP engaged and the aircraft had unexpectedly captured a valid ILS signal.

The prevalence of lack of crew awareness of modes and AP status was reviewed by the Investigation and it was noted that both were longstanding problems in aircraft with higher levels of automation. The Investigation noted that the ATSB occurrence database for the period 2010-2014 included six events where an AP was either not engaged when intended or was inadvertently engaged with an inappropriate flight mode selected and a further 18 occurrences where incomplete flight mode awareness had been identified and incorrect or inappropriate mode selections made. In respect of AP status awareness, the Investigation also noted its likely role in two fatal accidents to Boeing 737-800s, the Kenya Airways' 2007 accident soon after take off from Douala and the Ethiopian Airways' 2010 accident soon after take off from Beruit.

It was considered that whilst occasional mode selection errors are inevitable, the investigated event was of interest because it was not clear why selection of the APP mode and the consequent arming of the ILD GS and VOR/LOC approach modes had not been detected by either pilot until the unexpected climb was in progress given that "Qantas procedures provided an opportunity for the crew to detect the armed mode as the aircraft levelled at FL 390 as well as time available in the cruise between the inadvertent selection and the aircraft climbing". The Investigation referred to the 2013 Report of the PARC/CAST Automation Working Group which found that incomplete compliance with procedural requirements to cross-verify FMS entries is commonplace in normal line operations.

In respect of the subsequent lack of AP status awareness on the part of both pilots, the Investigation considered that "given that they had just dealt with what they thought was another autopilot-related issue, the crew thought they were dealing with a second autopilot-related issue" and that it was "therefore not surprising that they took some time to realise that they were actually dealing with the autopilot not being engaged". However, in respect of actual risk in this particular case, it was noted that "there were a number of other risk controls in place to help detect a more significant problem, such as an aural ‘Bank Angle’ alert if the bank angle exceeded 35°, ATC monitoring of the aircraft’s flight path and flight crew training in recovery from unusual attitudes".

In respect of the fact that the investigated event had been on the last sector of a four-sector duty day of over 11 hours and had occurred at night, it was noted that whilst the captain’s prior roster "met the relevant requirements and did not appear to be unduly problematic" the Captain reported an average of 10 hours work unrelated to their flying employment on non flying days. The view was taken that "this level of work has the potential to lead to cumulative fatigue and interfere with a person’s ability to ensure that they are getting adequate rest periods between rostered flight duty periods" but that "it is very difficult for an operator to control such activities" and that there is therefore "a significant onus on the crew member to ensure that they are appropriately rested prior to reporting for duty".

It was also concluded that a further factor that had increased risk was that "the Captain conducted significant non-aviation work when free from flight duty, which had the potential to lead to ineffective rest and cumulative fatigue".