On 25 January 2010, a Boeing 737-800 being operated by Ethiopian Airlines on a scheduled passenger flight from Beirut to Addis Ababa in night IMC disappeared from ATC radar soon after departure from Runway 21 and was subsequently found to have impacted the sea in an unintentional out of control condition some five miles south west of the airport less than five minutes after getting airborne Impact resulted in the destruction of the aircraft and the death of all 90 occupants.

On 25 January 2010, a Boeing 737-800 being operated by Ethiopian Airlines on a scheduled passenger flight from Beirut to Addis Ababa in night Instrument Meteorological Conditions (IMC) disappeared from ATC radar soon after departure from Runway 21 and was subsequently found to have impacted the sea in an unintentional out of control condition some five miles south west of the airport less than five minutes after getting airborne. Impact resulted in the destruction of the aircraft and the death of all 90 occupants.

An Investigation was carried out by the designated Lebanese CAA Investigator in Charge. Assistance was received from the French BEA in respect of readout and analysis of the DFDR and Cockpit Voice Recorder (CVR) data. A Preliminary Report was issued on 25 February 2010 followed by Progress Reports on 10 February and 25 August 2011.

It was established that the aircraft commander, although having been a professional pilot with the Operator for over 20 years, had only acquired an ATPL and his first multi crew command in 2008 on a Fokker 50, with conversion to the Boeing 737-800 taking place the following year and being completed the month prior to the accident flight. The First Officer had joined the Operator as a cadet a year prior to the accident and had become qualified on the Boeing 737-800 as his first type five months prior to the investigated event. The Investigation noted that the Ethiopian Airlines procedure for restriction of type-inexperienced pilot pairing - a Captain with less than 300 hours and a First Officer with less than 100 hours on type should not be scheduled together - was complied with on the accident flight. The aircraft commander had only 188 hours as Captain on type but was accompanied by a First Officer with 350 hours on type.

The Investigation recognised that some form of subtle incapacitation might conceivably have affected the aircraft commander’s performance. It was also noted that the flight crew had commenced duty at Beirut to operate the accident flight after a rest period which circumstantial evidence indicated had, for both pilots, included interrupted sleep which they had attributed casually to a meal eaten after their previous duty period. However, post mortem examination of the bodies had not been possible and no other evidence to confirm such possibilities had been found.

No evidence was found that the airworthiness of the aircraft or the weather conditions prevailing at the time had affected the ability of the crew to control the aircraft and it was noted that the cloud base in the area was around 2000 feet amsl with the control difficulties occurring in IMC or its ‘dark night’ equivalent. Recovered recorded aircraft and ATC data allowed the Investigation to reconstruct the aircraft trajectory for the whole duration of the flight and one of the resultant depictions included in the Official Report is reproduced below.

It was established from the recorded data that the aircraft commander had been PF for the departure and had flown the aircraft manually, although with somewhat coarse control inputs and with the headings set correctly on the MCP following ATC clearances not properly followed. Terrain Avoidance and Warning System (TAWS) Bank Angle alerts had begun 2.5 minutes after becoming airborne and shortly before a call for AP engagement from the PF at an altitude of around 4000 feet which was neither acknowledged nor actioned. The aircraft had remained in manual control mode for the remainder of the flight and both bank and pitch control had steadily deteriorated from then on with control inputs becoming increasingly confused and the aircraft being flown out of trim and with crossed controls. After a delayed ‘recovery’ from a first stick shaker activation, a second one occurred with the aircraft at an altitude of 9000 feet and as the aircraft remained stalled, a roll to the left continued which culminated in a spiral dive in which the recorded bank angle reached nearly 120° to the left and pitch attitude reached 48° nose down. Eventually, recovery became impossible and impact followed.

The Investigation considered that the request from PF for the AP to be engaged indicated “that he felt uncomfortable with manually controlling the aircraft and that he was looking for a solution” It was noted, however, that the reason why the AP did not (or could not have been engage(d) was that, as specified in the Boeing FCTM “the airplane should be in trim and the Flight Director commands should be satisfied before autopilot engagement” whereas at the time of the call these necessary conditions were not satisfied.

It was noted that the stabiliser trim setting for departure had been wrongly set to a position one unit more nose down than that prescribed for the aircraft as loaded. This had resulted in a greater need for significantly more (manual) control column back pressure to achieve the required initial climb profile. 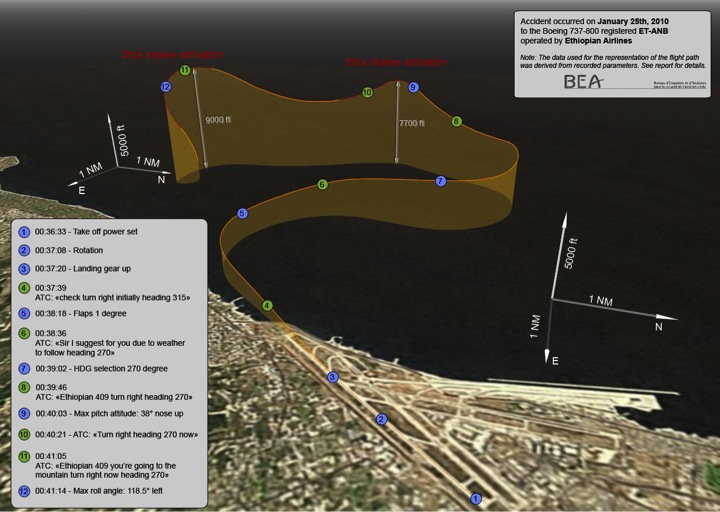 A 3D flight profile reproduced from the Official Report

Recorded data suggested that the performance of the First Officer as PM was normal in respect of normal operations but CVR evidence suggested little response to the failure to follow headings, and the alerts, warnings and abnormal attitudes which became progressively more prevalent during the flight.

The Investigation concluded that the Probable Causes of the accident were:

The following 11 Safety Recommendations were made as a result of the Investigation: