On 21 March 2022, soon after entering the Guangzhou radar control area level at the equivalent of FL290, a Boeing 737-800 was observed, contrary to clearance, to begin a sustained and very rapid descent without contacting ATC. After disappearing from radar, it was subsequently found to have impacted terrain at high speed which destroyed the aircraft and caused the deaths of all 123 occupants. The Investigation has commenced and both severely damaged flight recorders have been recovered. Analysis of recovered data is believed not to indicate an airworthiness-related explanation but this has not been confirmed by the responsible Investigation Agency.

On 21 March 2022, a Boeing 737-800 (B-1791) being operated by China Eastern Airlines on a scheduled domestic passenger flight from Kunming to Guangzhou as MU5735 and in the cruise at the equivalent of FL290 in day VMC suddenly and without notification to ATC, began a steep descent which, with one brief interruption, continued to a high speed terrain impact which destroyed the aircraft and caused the death of all its 123 occupants.

An Investigation into the Accident has been commenced by the Aviation Safety Office of the Civil Aviation Administration of China (CAAC). The FDR and CVR were recovered from the accident site but both had extensive impact damage and were sent to the NTSB to attempt to extract any useful data which might assist the Chinese Investigation.

The CAAC has briefed that the flight departed from runway 21 at Kunming and climbed on track in accordance with its flight plan whilst conducting normal communications with ATC. Fifty minutes after takeoff, the flight entered airspace controlled by the Guangzhou ACC on airway A599 and in the cruise at 8,900 metres (equivalent to 29,200 feet). Four minutes later, the flight appeared on radar to deviate from its clearance. An immediate call by ATC received no response from the aircraft and after 1 minute and 45 seconds of descent, the radar return from the aircraft ceased at 3,880 metres (equivalent to 12,730 feet). The Investigation has established that there was no adverse weather in the area, that no dangerous goods were on board, that the aircraft was not carrying any recorded airworthiness defects and that the air crew on board and all ground staff a Kunming involved in the maintenance release of the aircraft were appropriately qualified.

Editor’s Note: Whilst no Official announcement has been made on the progress of the Investigation, it has been indicated by an unidentified source believed to be reliable that no airworthiness explanation for the unexplained descent was found in the data extracted from the flight recorders. The efficacy of this widely shared ‘information’ has not been disputed (or confirmed) by the CAAC Investigation.

An unofficial but reliable reconstruction of the as yet unexplained descent has been made public and is presented below. 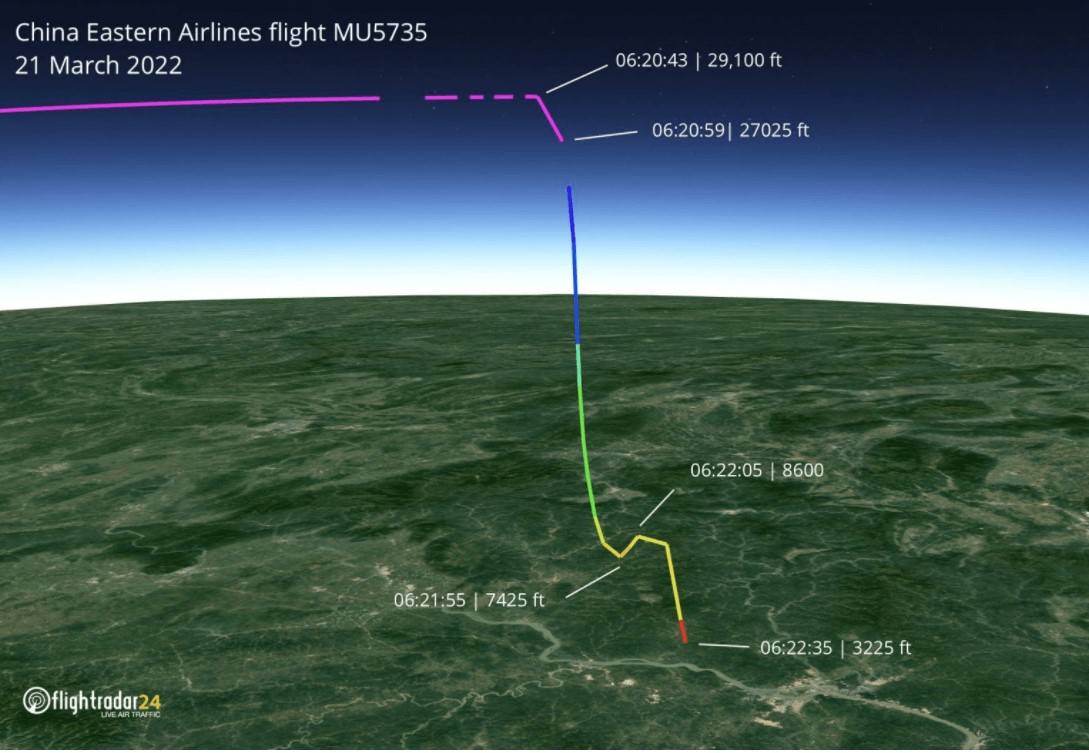 A Preliminary Report of progress in the Investigation was sent by China to the ICAO on 20 April 2022 but has not yet been released. However, an official summary of its contents, on which this summary article - apart from the illustration - is based, was released by the CAAC on that date.