On 31 March 2014, a Geneva TWR controller believed it was possible to clear a light aircraft for an intersection take off ahead of a Fokker 100 already lining up on the same runway at full length and gave that clearance with a Boeing 737-800 6nm from touchdown on the same runway. Concluding that intervention was not necessary despite the activation of loss of separation alerts, the controller allowed the 737 to continue, issuing a landing clearance whilst the F100 was still on the runway. Sixteen seconds later, the 737 touched down three seconds after the F100 had become airborne.

On 31 March 2014, a Boeing 737-800 (TC-JGV) being operated by Turkish Airlines on a scheduled passenger flight from Istanbul Atatürk to Geneva as THY1QM in accordance with ATC instructions touched down on runway 05 at destination three seconds after a Fokker 100 (OE-LVL) being operated by Tyrolean Airlines on a scheduled passenger flight for Austrian Airlines from Geneva to Vienna as AUA 582W had taken off from the same runway. Separation between the two aircraft along the runway was reduced to just over 50% of the prescribed minimum of 2,400 metres.

It was established that the TWR controller had instructed the Fokker 100 to line up and wait at the beginning of 3,900 metre-long runway 05 following the departure of a Falcon 7X and then asked the Boeing 737-800 on visual final approach to the same runway (LDA 3570 metres) and at 9.8 nm from its displaced threshold to reduce speed to 160 KIAS. Noticing that a PC12 awaiting departure from the north side of the runway at the taxiway 'Z' intersection was in the same (Light) wake vortex separation category as the Falcon 7X, they had instructed it (in French) to also line up and wait and then informed the F100 that it would now be No. 2 to depart.

As the PC12 entered the runway and was cleared to take off (in French), the 737 was at 6nm. At this point, the controller reported realising that the delay in giving take off clearance to the F100 would compromise the minimum separation (2,000 metres) between it and the approaching 737 - by now at 5nm - at the point when the F100 could be expected to get airborne. They reacted by giving the F100 an initial altitude of 4,000 feet and then instructed the 737 to further reduce its airspeed from 160 KIAS to the minimum possible.

Once the PC12 became airborne, it was instructed (in French) to "climb at best rate" until passing 5,000 feet QNH. Thirty seconds later, with the 737 at 2.2 nm and at 147KIAS, the PC 12 was instructed (in French) to turn left and take-off clearance was issued to the F100. Twenty three seconds later, the RIMCAS safety net "indicated a potentially dangerous convergence on the runway" by illuminating the radar labels of the 737 and the F100 in amber on the screens of the A-SMGCS runway monitoring display but "the controller, who was busy looking outside in order to manage his traffic, did not notice the alert". Fifteen seconds later, these two radar labels turned red and a simultaneous aural alert was generated which indicated that the situation "was becoming critical and that immediate corrective action should be considered". The 737 was at a height of 200 feet, 0.5 nm from the runway threshold and 1,215 metres from the F100 which was passing taxiway 'F' and accelerating through 85 knots.

At this point, the Controller reported having "judged that separation was being re-established and considering that a go-around was not necessary" and deciding that the alternative of instructing the 737 to go around and the F100 to reject take-off "had an uncertain outcome" and so decided not to intervene. The 737, still closing on the 100, was cleared to land and as it crossed the runway threshold it was 1,206 metres behind the F100 and the two aircraft were both travelling at the same ground speed of 134 knots. Thereafter, the distance between them increased. The 737 pilots reported having "mutually confirmed that the aircraft which was taking off had indeed lifted off and continued the approach" and stated that it had "seemed to them that the reduced separation minima were complied with". Four seconds later, the F100 became airborne and three seconds after that, the 737 touched down, subsequently vacating the runway normally on taxiway 'C'. 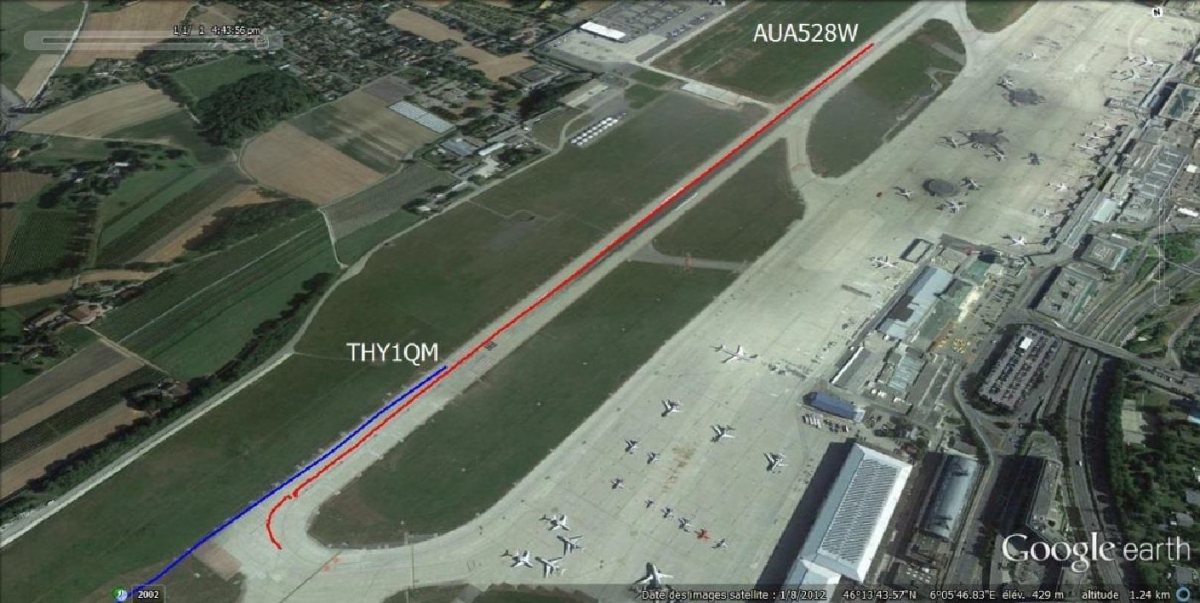 In connection with multiple line ups and reduced separation minima, it was noted that:

In connection with the alerting provided by RIMCAS (Runway Incursion Monitoring and Collision Avoidance) in respect of aircraft approaching an occupied runway in good visibility conditions such as those which prevailed when the investigated event occurred, it was noted that the initial amber visual alert is triggered when the aircraft on approach reaches 30 seconds flying time from the threshold. If a potential conflict situation persists, then at 15 seconds flying time from the threshold, an aural and visual warning is triggered "which may require immediate corrective action". In the case of an aircraft "close to the runway threshold", the triggering of such a warning "also depends on the distance to the closest point of approach, taking into consideration the observed distance between the conflicting aircraft, its rate of change and the change of this rate". It was also noted that "the measures to be taken in response to (RIMCAS Alerts/Warnings) are not the subject of specific procedures or particular attention during the regular training for emergency situations".

The Investigation found that since the event which was the subject of the Investigation, there had been three breaches of the prescribed minimum separation between traffic on approach and departing or previously-landed traffic with varying RIMCAS Alert/Warning activations.

It was concluded that the amber RIMCAS activation in effect is visual only and also that a Warning has no aural element, because "the RIMCAS system is better adapted to issuing alerts conditioned by the low-visibility operation procedures" in which approaching traffic subject to an 8 nm minimum separation that the runway controller manages by reference to his A-SMGCS screen. Under these conditions it is no longer possible to add an aircraft into the arrival/departure sequence so that RIMCAS amber Alerts "are in principle triggered only by runway incursions" which can be resolved based on the 80 second advance warning. More generally, it was considered that the fact that RIMCAS activation is based on time whereas minimum separations on/over the runway are defined as distances "may be perceived by controllers as a shortcoming in the effectiveness of the system".

It was noted that the crew of the 737 had done everything they could to alleviate the potential conflict by promptly following the controller's requests to reduce speed. It was also noted that in a situation such as that encountered by the 737, pilots may decide to go around which cause airborne conflict with traffic departing ahead and that where they continue in the expectation of a landing clearance issued whilst a departing aircraft is still on the runway, a subsequent rejected take off by the departing aircraft may lead to separation on the ground becoming "highly critical".

In respect of the decision making of the controller involved, for whom the prevailing workload was assessed as "medium", it was considered that:

The Investigation determined that the Cause of the investigated Serious Incident was "the dangerous convergence of an aircraft on take-off and an aircraft in (the) landing phase (both) on concrete runway 05 because of the inappropriate integration of a take-off from (the) intersection (at) taxiway 'Z'".

A Contributory Factor was also identified:

The Final Report was approved on 1 December 2016 and published on 5 December 2016. ICAO AIRPROX Category 'A' was assigned.