On 30 July 2011, a Boeing 737-800 overran the wet landing runway at Georgetown after a night non-precision approach, exited the airport perimeter and descended down an earth embankment. There were no fatalities but the aircraft sustained substantial damage and was subsequently declared a hull loss. The Investigation attributed the overrun to a touchdown almost two thirds of the way down the runway and failure to utilise the aircraft s full deceleration capability. Loss of situational awareness and indecision as to the advisability of a go-around after a late touchdown became inevitable was also cited as contributory to the outcome.

On 30 July 2011, a Boeing 737-800 (9Y-PBM) being operated by Caribbean Airlines on a scheduled international passenger flight from Port of Spain Trinidad to Georgetown as BW 523 overran the landing runway at destination after completing a night RNAV(GPS) approach in VMC. It descended down a 20 foot high earth embankment and stopped only after it had exited the airport perimeter and sustained such extensive damage that it was subsequently declared a hull loss. All 163 occupants successfully evacuated the wreckage but one serious injury and an unspecified but multiple number of minor injuries were sustained as a result of either the impact or the evacuation. 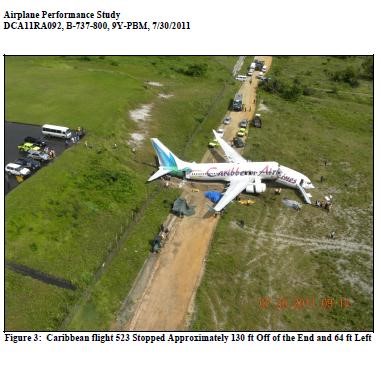 The aircraft where it finally stopped. [Reproduced from the Official Report]

An Investigation was carried out by the Guyana Civil Aviation Authority (GCAA) with technical assistance from the NTSB. Data relevant to the Investigation was obtained from both the FDR and CVR fitted to the aircraft.

It was established that the flight had begun in New York and had made a transit stop at Port of Spain, Trinidad where a complete crew change also occurred prior to departing on the one hour flight to Georgetown. FDR data indicated that the flight had been routine apart from a deviation around a thunderstorm cell as the aircraft began descent and positioning for an approach to runway 06 to which a clearance for an RNAV(GPS) approach was given. With about 5 nm to go to touchdown, flap 30 was selected and during the stabilised approach, the AP was disconnected when passing around 1,000 feet. After a further 45 seconds, the aircraft crossed the runway threshold at speed close to the applicable Vref of 149 KIAS. However, it then floated with excess thrust maintained and main gear touchdown on the wet surface did not occur until the aircraft was approximately 1,430 metres along the 2,270 metre-long runway.

A few seconds before touchdown occurred, the CVR recorded the Captain calling a go-around and the First Officer acknowledging it but when, three seconds after main gear touchdown, the First Officer called “Max?”, the Captain quickly responded that he “had it” and thrust was not required. The First Officer was then recorded immediately calling autobrake disarmed and manual braking as automatic spoiler deployment followed. Thrust reversers were selected without delay but with just 610 metres to go until the end of the runway and only to a position between idle and detent 2. Manual brake pressure was only slowly increased and did not reach the maximum achievable pressure of 3000 psi until there was only 75 metres to go until the end of the runway. The prolonged float and delayed touchdown were attributed to the maintenance of excessive thrust when over the first quarter of the runway.

As it continued down the runway, the aircraft began to slowly but progressively deviate left of the centreline. It subsequently departed the end of the runway, descended down a 20 foot high slope and broke through the chain link perimeter fence before it crossed a dirt track and came to a stop some 40 metres beyond the end of the runway. At the time of the landing, the wind was light and variable and was assessed to have had minimal effect on the controllability of the aircraft.

Once the aircraft had come to a stop, it was reported that the interior of the aircraft was in almost complete darkness. The Purser reported that as the landing continued, she had realised that something was wrong and had shouted commands to the passengers to “bend over and get your heads down” three times. There was no PA from the flight deck and the evacuation was initiated by passengers, one of whom opened the R1 door and the slide inflated. Several other passengers followed him but L1 door was jammed shut by a Galley Unit. The Purser followed the passengers out of the R1 door and once outside used her flashlight to guide passengers to an assembly area at the front of the aircraft. It was not possible to do a headcount as the large group in the assembly area was a mixture of passengers and emergency services personnel and it was not possible to distinguish between them in the darkness. By this time she reported that “several vehicles had arrived on the scene” but as none of them were ambulances, a seriously injured passenger she had located was “placed in the back of a pick-up truck”. In the rear cabin, efforts to open the L2 door were unsuccessful and it was suspected that this was attributable to lack of crew familiarity with the opening of exits when an aircraft is in an unusual attitude rather than any jamming or malfunction of the door. It then took two people to open the R2 door which was eventually opened with difficulty and only “five to ten” passengers were able to use this exit before its slide deflated. One of the cabin crew then jumped to the ground and got a passenger to help hold the slide out like a chute and about another ten passengers were able to use this door. The over-wing emergency exits functioned properly and were used by a majority of the passengers.

The flight crew stated that due to the unexpected nature of the occurrence, they had been in no position to “alert the cabin crew or passengers about the impending disaster (and) had no opportunity to carry out any emergency drills”. The First Officer reported that after the impact he had removed his harness and got out of his seat. He used his flashlight to illuminate the flight deck which was completely dark. The door into the passenger cabin was ajar but as with the two flight deck side windows, it was jammed and exit into the cabin was also obstructed by the forward toilet door which was jammed open. Eventually, the First Officer managed to crawl into the cabin and RFFS personnel arrived and helped get the injured Captain out of the flight deck. 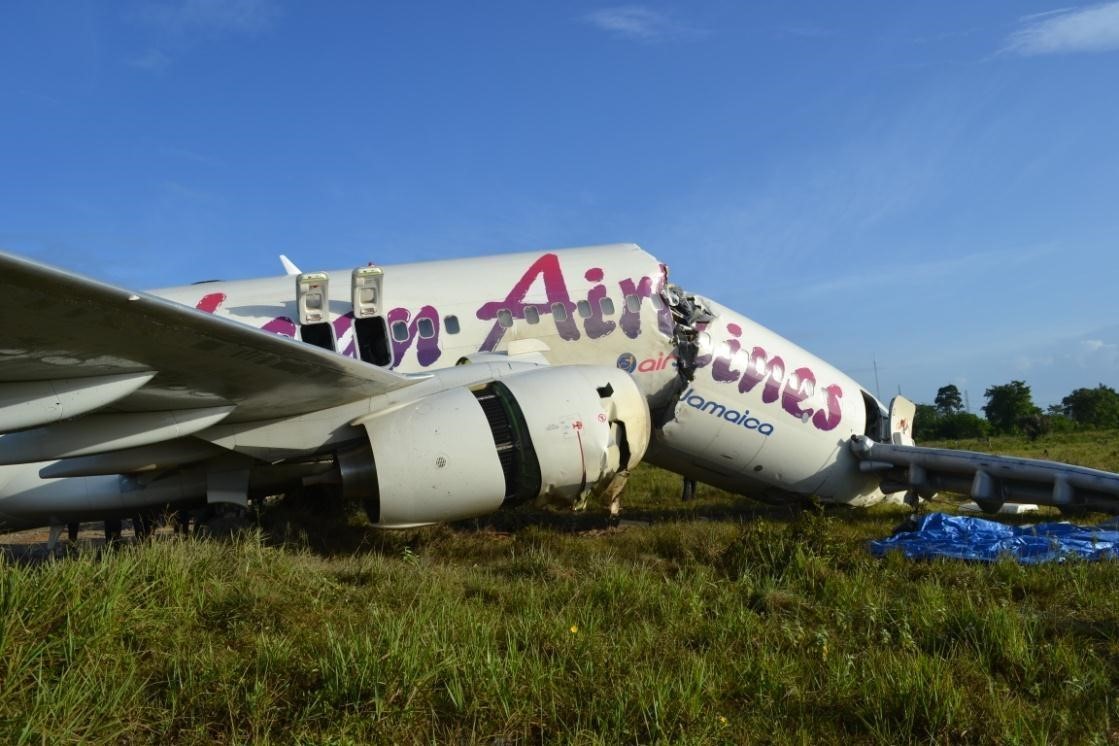 The front of the aircraft showing the split fuselage. [Reproduced from the Official Report]

Issues related to the accident

The Investigation identified and reviewed various elements in the circumstances in which the accident occurred. These included the following:

The Probable Cause of the accident was formally documented as having been that “the aircraft touched down approximately 4700 feet beyond the runway threshold, some 2700 feet from the end of the runway, as a result of the Captain maintaining excess power during the flare, and upon touching down, failure to utilise the aircraft’s full deceleration capability, resulted in the aircraft overrunning the remaining runway and fracturing the fuselage”.

Three Contributory Factors relating to the performance of the flight crew were identified as follows:

A total of 23 Safety Recommendations were made as a result of the Investigation as follows:

Safety Action taken by the Georgetown Airport Operator prior to the completion of the Investigation was noted as having included an adjustment to the PAPI beam projection on runway 06 to match the vertical profile of the RNAV-GPS approach and the installation of distance-to-go signboards at 1,000 foot intervals beginning at 4,000 feet in both directions of the runway.

The Final Report was completed in September 2014, subsequently published and eventually released online.