On 27 December 2016, the crew of a Boeing 737-800 taking off from Goa at night lost control shortly after setting takeoff thrust following which the aircraft almost immediately began to drift right and off the runway. It then continued at speed over rough ground for almost 300 metres before eventually stopping after which a MAYDAY call was followed by an emergency evacuation. The Investigation found that the Captain had increased thrust to takeoff without first ensuring that both engines were stabilised and then attempted to correct the drift by left rudder and brake rather than rejecting the takeoff.

On 27 December 2016, a Boeing 737-800 (VT-JBG) being operated by Jet Airways on a scheduled domestic passenger flight from Goa to Mumbai departed the right hand edge of the 3,430 metre-long runway 26 at Goa shortly after thrust had been set for a night VMC takeoff. It did not then stop until it was over 200 metres from the runway and had travelled almost 300 metres over rough ground whilst turning through over 180° to face up the runway approach. The crew declared a ‘MAYDAY’ and initiated an emergency evacuation during which 16 of the 138 passengers sustained minor injuries. Substantial damage was caused to the aircraft due to impact with obstructions and to ground lighting due to impact with the aircraft after it had left the runway. 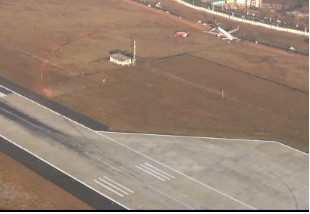 The aircraft in its final stopping position adjacent to the aerodrome perimeter track. [Reproduced from the Official Report]

An Investigation in accordance with ICAO Annex 13 principles was carried out by a Committee of Inquiry established for the task by the Indian DGCA. The SSFDR and SSCVR were both removed from the aircraft and their data downloaded.

No evidence of any relevant pre-excursion defects was found and in benign weather conditions (surface wind variable at 6 knots), the aircraft had entered the runway at an intermediate point with permission to backtrack and line up for takeoff from the beginning of runway 26. Having made the required 180° turn without the use of differential thrust and completed it with a recorded groundspeed of 5 knots, the Captain had then stopped the aircraft for about a minute whilst awaiting takeoff clearance. Once this was received, instead of waiting until both engines had stabilised as required at 40% N1 before pressing the TOGA button, the Captain had done so with the left engine at 46% N1 and the right engine at 28% N1 and with left brake pressure applied. Thrust had then increased asymmetrically towards TOGA (which was 95.7% N1) with a drift to the right of the runway centreline quickly developing. Then, instead of immediately rejecting the takeoff, the speed was allowed to increase whilst an attempt to counter the drift right was made by applying full left rudder. As it became clear that the aircraft was about to depart the north side runway edge, the left N1 had reached 98% whilst the right N1 was steadily catching up but was still only at 89%.

The right engine thrust lever (only) was then retarded to 40% and, with full left rudder still being applied, the aircraft departed the side of the runway as the groundspeed continued to increase. About 5 seconds later, as the maximum recorded groundspeed of 47 knots was reached, the applied left brake pressure was suddenly increased briefly to maximum before being reduced by about half. The right engine N1 was then reduced to idle as the left engine N1 reached 102% and the ground speed began to reduce. The SSDFR data then stopped as both fuel levers were moved to cutoff as the aircraft continued to turn right through 046° at 32 knots ground speed. It was clear that the ground track of the aircraft had been due to thrust asymmetry both initially and during the extended runway excursion. It was noted that at no time during the reject were the speed brakes extended.

Structural damage to the aircraft as a result of the excursion was extensive. It included damage to the lower fuselage, landing gear and both engines. The illustration below shows where parts became detached during excursion. 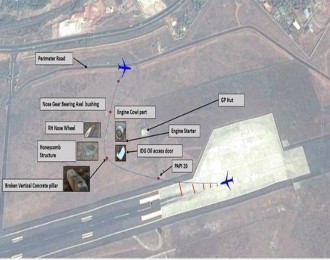 The distribution of wreckage during the excursion. [Reproduced from the Official Report]

The Investigation observed that the Captain had fairly recently transitioned from a turboprop command to a jet command and, after the mandatory 180 hours of self-study ground training, had received the required simulator training and passed the required checks. He had then been required to undergo 100 hours of supervised line flying and pass a final line check. It was clear from the recorded flight data that despite the claim by the crew that the engines had been stabilised at 40% N1 before TOGA thrust was selected, this was not the case. Rather, the Captain had “not carried out certain actions which were either precursors to unsafe acts or were unsafe acts in themselves”. It was concluded that although the transition training from turboprop to jet type rating had met the requirements, “it appears that certain vital training aspects and checks were not covered, for example allowing the engines to stabilise before pressing TOGA and the limited effectiveness of rudder in a jet aircraft at low speeds”. It was also considered that the First Officer’s failure to intervene to prevent the circumstances that created the accident indicated a lack of CRM training.

The Probable Cause of the Accident was formally determined as follows:

The Captain pressed the TOGA switches when the thrust on no.1 engine was 40% and no.2 engine was 28% which was contrary to the applicable SOP. This caused the No.1 engine thrust to increase at a faster rate than no.2 engine thrust resulting in aircraft yawing towards right. In the absence of timely and necessary corrective action including rejecting the takeoff, the aircraft veered off the runway and continued to move in a semicircular arc on the undulating ground before stopping, resulting in substantial damages to the aircraft.

A total of 7 Safety Recommendations were issued as a result of the Investigation as follows:

The Final Report was completed on 13 November 2017 and later released online.