On 5 January 2020, a Boeing 737-800 overran the wet snow contaminated landing runway at Halifax by almost 100 metres after a touchdown zone landing and a maximum deceleration effort followed a stabilised ILS approach to a shorter runway than originally intended which also had an out of limits tailwind component and was anyway flown contrary to required tailwind speed control. The Investigation found the crew had assumed the only significant difference between the initially planned and eventually used runways was the shorter length of the latter which was judged acceptable and no new landing performance data had been accessed.

On 5 January 2020, a Boeing 737-800 (C-FUJR) being operated by WestJet on a scheduled domestic passenger flight from Toronto to Halifax as WJA248 overran the end of the wet snow contaminated landing runway at destination despite a touchdown zone landing and a maximum deceleration effort to follow after the crew changed runways without then establishing the changed landing performance. There was no damage to the aircraft or injury to the 172 passengers and no emergency evacuation was required but it was two hours before the last of the passengers were transported to the terminal. 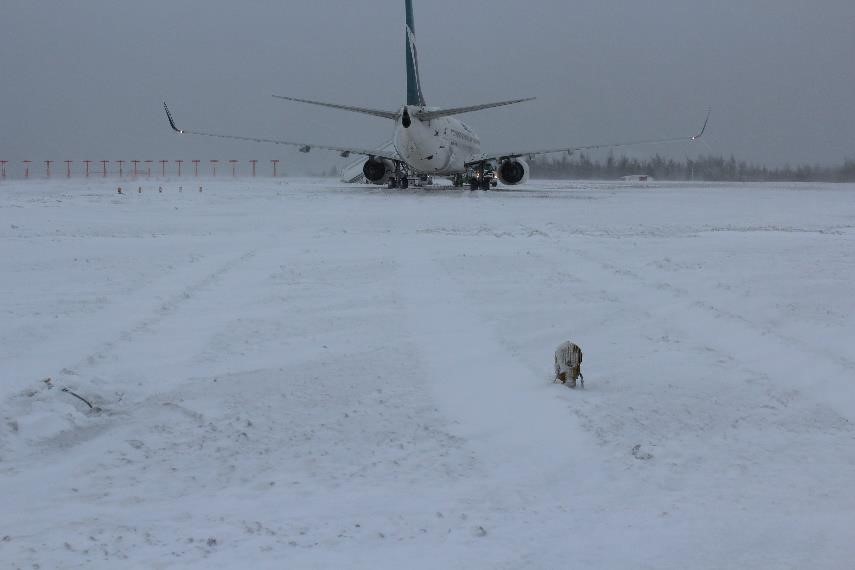 An Investigation was carried out by the Canadian Transportation Safety Board (TSB) assisted by data downloaded from the FDR but relevant data on the CVR was overwritten because the corresponding CB was not tripped after the accident. Recorded ATC data were also available.

It was noted that the Captain who was acting as PF for the flight involved and had been working for the operator for 10 years and had a total of over 30,000 hours flying experience including 7,500 hours on type. He had been promoted to Captain in 2017. The First Officer had joined the operator three months prior to the accident and completed line training on type the following month. He had a total of 2,275 hours flying experience including 75 hours on type.

While en route, the flight crew obtained a destination weather report and noted that the wind was from 030° 16-24 knots with the equivalent of 2000 metres visibility in light snow with the temperature  -01° C and an overcast at 300 feet agl. The RNAV approaches to runway 05 and the ILS to runway 14 were available.

The flight crew programmed the arrival and RNAV approach for runway 05 into the FMC and obtained a landing distance of 2,200 metres for that runway from the ACARS using flaps 30 and autobrake 3 for a VREF of 147 KIAS. Shortly afterwards, ATC issued a RSC report which indicated that the middle 50 metres of both the 61 metre-wide runways were 100% covered in a “trace of wet snow” and the remainder 100% covered in 5 cm of wet snow.

Updated weather subsequently received gave a visibility reduced to 1000 metres and a cloudbase of 200 feet. Since the new cloudbase was the minimum for runway 05, the crew requested an ILS approach to the 2,350 metre-long runway 14 instead. With about 45 nm to run to the destination overhead, and descending through 13 000 feet QNH, clearance for this approach was given routing via the procedure IF located approximately 10 nm from touchdown. The crew reported that they had “mentally assessed” that the latest reported wind from 020° “would result in a crosswind for runway 14 because it was perpendicular to runway 05” and although it was much shorter than the 3,200 metres runway 05, the available 2,350 metres was more than the required landing distance already calculated. On that basis, they had not requested new ACARS performance data or revised the target approach speed. They did not recognise that the new approach would not only result in a tailwind component, but one of 15 knots which was significantly higher than the company landing limit of 10 knots.

Approximately six minutes before the subsequent landing, Terminal Control instructed the flight to change to TWR and on doing so, the TWR controller advised them that the wind was from 010° at 14-23 knots and the RVR was 1220 metres. Because all recent landings had been carried out on Runway 05, no braking action reports were available for Runway 14. Approximately four minutes before landing, TWR gave the wind as from 020° at 17-23 and issued a landing clearance.

The approach was stabilised and the AP was kept engaged. A final spot wind of 010° at 19 knots (indicative of a 13 knot crosswind component) was provided by TWR approximately one minute before landing but the crew subsequently stated that they had not recognised this. The AP was disconnected at approximately 100 feet following which the aircraft descended at a rate that was high enough to cause an EGPWS ‘SINK RATE” annunciation just before the aircraft entered the flare. The threshold was then crossed at 35 feet agl and touchdown followed 365 metres from the beginning of the 2350 metre-long runway. During the flare, the airspeed fluctuated between 13 and 17 knots above the VREF calculated for runway 05 and not subsequently revised. The groundspeed at touchdown was some 26 knots above the (originally calculated) VREF.

The speedbrakes and thrust reversers were deployed on touchdown and the autobrake system activated for 8 seconds after touchdown which was consistent with the autobrake 3 setting. Maximum reverse thrust was reached seven seconds after touchdown as the aircraft was decelerating through 144 knots groundspeed with 1340 metres of runway remaining and soon after this, the Captain reported having realised that deceleration was less than he had expected and initiated manual braking, upon which the antiskid system activated. Twelve seconds later decelerating through 68 knots groundspeed (60 knots airspeed) with 520 metres of runway remaining, the Captain selected reverse thrust to idle and reduced the amount of braking. It then became apparent that the aircraft was not going to have slowed down enough to make the turn off at the end of the runway and it overran onto the snow-covered grass RESA and came to a stop 91 metres from the end of the runway.

The airport RFFS attended and after confirmation that there was no visible damage to the aircraft and there were no injuries, everyone remained on board until buses arrived to transport them to the terminal. The first bus arrived after about 35 minutes but it was 1½ hours before the last of the 172 passengers were disembarked.

Whilst waiting for buses, the flight crew received an ACARS message from the maintenance controller reminding them to trip four specific CBs to interrupt power to the CVR and FDR which they did but as the CVR CB was not one of the four, it continued recording.

There was no evidence indicating that the aircraft was other than airworthy in all relevant respects at the time of the investigated event. The Investigation therefore focused on the consequences of the crew’s decision-making process when changing runways and the aircraft performance on the contaminated runway with the tailwind conditions present.

Five Findings as to Causes and Contributing Factors were formally recorded as follows:

Two Findings as to Risk were also formally recorded as follows:

Safety Action taken by WestJet as a result of the investigated event prior to the completion of the Investigation was noted as having included the following:

The Final Report of the Investigation was authorised for release on 5 May 2021 and it was officially released on 20 May 2021. No Safety Recommendations were made.