On 24 November 2010, a Boeing 737-800 being operated by Virgin Blue Airlines on a scheduled passenger flight from Melbourne, Victoria to Hobart, Tasmania marginally overran the destination runway after aquaplaning during the daylight landing roll in normal ground visibility.

On 24 November 2010, a Boeing 737-800 being operated by Virgin Blue Airlines on a scheduled passenger flight from Melbourne, Victoria to Hobart, Tasmania marginally overran the destination runway after aquaplaning during the daylight landing roll in normal ground visibility. The overrun was confined to a sealed pavement surface and the aircraft was subsequently taxied to the assigned gate. None of the 164 occupants were injured and it was confirmed once parked that the aircraft was undamaged.

An Investigation was carried out by the ATSB. It was established that the First Officer, who had completed type line training two days earlier, had been designated as PF for the flight and that an Instrument Landing System (ILS) approach had been made to runway 12 in preference to a circling approach to runway 30 which had been as offered by ATC. Visual Meteorological Conditions (VMC) had prevailed from about 13nm out at 3000ft aal and it was understood prior to landing that a small tailwind component was likely to be present.

Both pilots reported believing that the 30° flap touchdown on the wet runway had been normal. Flight Data Recorder (FDR) data showed that it had occurred at about 660m from the threshold and also that there had been a 10 knot tail wind component at the time. At about 60 knots, it was reported that the aircraft commander had taken over control in accordance with SOPs due to the absence of a steering tiller at the co pilot position. At this point, the aircraft had been just over three quarters of the way along the 2251m runway with autobrake 3 having worked normally thus far and the thrust reversers having been stowed. However, braking effectiveness thereafter was less than expected and the thrust reversers were re-selected and as the aircraft reached the threshold markings at the far end of the runway, speed had decreased significantly.

The crew reported that the aircraft overran the runway onto the sealed stopway at ‘a walking pace’ with the aircraft stopping with the flight deck about 4m beyond the end of the runway. The aircraft had been turned around with one main landing gear on the overrun area and the other within the runway and then taxied to the gate after informing ATC of the situation. The runway / stopway and the aircraft were subsequently inspected and no damage was found. It was noted that the stopway concerned was rated to accommodate a Boeing 737.

Flight data from a landing on runway 30 in dry surface conditions at Hobart the previous day by the same aircraft was also examined during the Investigation. In this case, the aircraft had touched down with an actual tailwind component of about 4 knots at 590 m from the threshold and the speed had reduced to 60 knots at 1980m.

A comparison of the ground rolls of the two landings was made and an illustration taken from the Official Report is reproduced below: 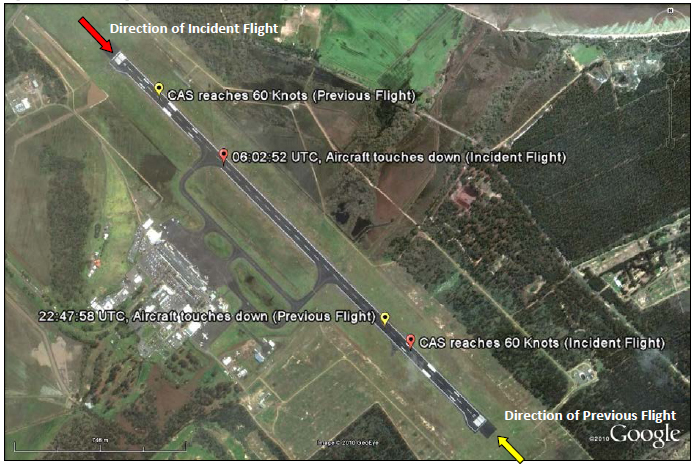 It was noted that the runway surface was level and of grooved asphalt and that prior to the overrun, a full resurfacing had been planned for 2012/2013. To lengthen the life of the existing pavement, it had been resealed with a spray treatment called “Liquid Road” nine months earlier. Some sections of the runway which had broken up had to be patched and the patching was not grooved. It was found that two months earlier, another Virgin Blue crew had reported that the runway was slippery after which an airport pavement engineer examined it and considered it satisfactory and confirming that the small areas of patching should not be grooved. Earlier on the day of the overrun, it was found that the crew of another aircraft had reported to ATC that the runway was slippery but this report had not been passed on to the incident aircraft.

After the incident, an inspection of the runway and stop way found that there was rubber build-up around the runway 30 touchdown area which included some patched areas. As a result, the Airport Operator advised by Notice To Airmen that the runway “may be slippery when wet”. This NOTAM was subsequently modified to advise jet aircraft crew to maximise use of reverse thrust to mitigate potential aquaplaning and soon afterwards modified again to state that the runway was not grooved. Removal of the “Liquid Road” treatment for 8 metres either side if the runway centreline was also carried out, with completion of this work seven weeks after the incident and the planned full resurfacing of the runway was brought forward to November 2011. Virgin Blue issued a flight crew instruction that detailed modified wet runway takeoff and landing procedures for Hobart.