On 3 May 2019, a Boeing 737-800 significantly overran the wet landing runway at Jacksonville Naval Air Station at night when braking action was less than expected and ended up in shallow tidal water. The Investigation found that although the approach involved had been unstabilised and made with a significant tailwind and with only a single thrust reverser available, these factors had not been the cause of the overrun which was entirely attributable to attempting to complete a landing after touching down on a wet runway during heavy rain in conditions which then led to viscous aquaplaning.

On 3 May 2019, a Boeing 737-800 (N732MA) being operated by Miami Air International on a non-scheduled passenger flight from Leeward Point Field within the US military base at Guantanamo Bay, Cuba to Jacksonville Naval Air Station as LL293 and being used for line training of the First Officer touched down slightly beyond the touchdown zone on runway 10 at destination after an unstabilised approach in VMC and subsequently overran the end of the runway, only stopping after continuing through the sea wall into the shallow water of an adjacent tidal estuary. The conduct of evacuation was problematic but only one minor injury was recorded amongst the 142 occupants. The aircraft sustained substantial damage. 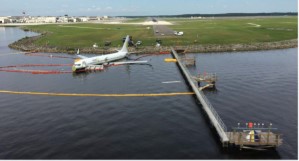 The accident aircraft in the river the following day. [Reproduced from the Official Report]

An Investigation was carried out by the NTSB. The CVR and FDR were removed from the aircraft and their relevant data were successfully downloaded.

The flight was being used as part of the First Officer’s initial line training. The 55 year-old Training Captain, who was acting as PF for the accident flight, had a total of 7,500 hours flying experience of which 2,240 hours were on type. The 47 year-old trainee First Officer also had a total of 7,500 hours flying experience of which just 18 hours were on type and the rest had been accumulated mainly on single-engined light aircraft on which he was instructing prior to being recruited by Miami Air. The Captain had been with the operator over 11 years and after 8½ years employment as a First Officer had been promoted to Captain 3½ years prior to accident. He had flown just 5 hours in the previous 30 days. A Company engineer was occupying the flight deck supernumerary seat.

The aircraft departed with an inoperative left thrust reverser recorded as an ADD under the provisions of the MEL and the flight was uneventful until descent towards the intended destination was under way. This involved some routine deviation for weather avoidance purposes and with heavy precipitation around the destination, it was not initially clear whether an approach to runway 10 or to runway 28 would be best with the Captain eventually settling for the former and an RNAV GPS approach which the radar controller advised would be routinely monitored with PAR in accordance with naval practice.

The speedbrakes were not armed for the approach. As the landing gear was selected down, landing clearance was given accompanied by a spot wind of 240° at 10 knots. Half a minute later with the flight passing 1390 feet QNH (the runway threshold elevation was 21 feet) and about 3.5 nm to go, the controller advised that the flight was “well above” a 3º glidepath which would have meant that the PAPI would have been showing all white indicating an approach angle in excess of 3.5º. The speed at this time was 5 knots above the applicable VAPP at 158 KCAS and the rate of descent 1,062 fpm with a 7 knot tailwind component.

Ten seconds later, the AP was disconnected and the rate of descent increased slightly as the Captain called for the Landing Checklist which was then run. With about 2.8 nm to go, the altitude was about 1,100 feet, the rate of descent had reduced to 1,000 fpm and the speed was at VAPP with a 13 knot tailwind component and the flight still slightly above the PAPI target. However, over the next minute, pitch control inputs increased the airspeed to 170 KCAS whilst the tailwind component remained similar.

About 1.6 nm from the (displaced) threshold of the 2,440 metre-long runway the flight was at an altitude of about 680 feet and back to in excess of a 3.5° glidepath (4 whites visible on the PAPI) - a vertical profile which was then sustained for the rest of the approach.

Recorded flight data also showed that from 3.5 nm out, the aircraft had been offset about 30 metres to the right of the extended runway centreline and then, with about 1 nm to go, the aircraft banked to the right which increased the deviation to 220 feet when the aircraft was about half a mile from the threshold at 360 feet QNH. As the aircraft was then banked left to regain the centreline, the rate of descent increased to a recorded maximum of 1,580 fpm as six successive EGPWS Sink Rate Alerts were occurred. These continued until after the displaced runway threshold had been overflown at 120 feet agl at VAPP+17 knots with a 10 knot tailwind component.

Touchdown occurred with a recorded 14 knot tailwind component approximately 6 metres to the right of the centreline and just beyond the TDZ at 168 KCAS, equivalent to 20 knots above the applicable VREF. Once on the ground, the aircraft was steered left until it reached 3 metres left of centreline and then began to move back towards the right. The right thrust lever was set to idle reverse and the speedbrakes were then manually selected. The right thrust lever was then retarded to detent 2, the ‘normal operations’ position, as the autobrakes were applied briefly before left side manual braking, which automatically disengaged them, was commenced. Manual braking then continued for the remainder of the landing roll but to little effect.

It was also evident from FDR data that after touchdown, the aircraft had crossed the runway centreline from left to right about 1,100 metres beyond the displaced landing threshold and continued to the right before beginning a return to the centreline. It was still 16 metres to the right of it when the aircraft departed the end of the runway after which it travelled approximately 350 metres before continuing through the seawall before finally coming to a stop in shallow tidal water some distance offshore.

The cabin crew reported two “crashes” followed by the passenger cabin going dark. There was no communication from the flight crew but soon afterwards, the Captain came out of the flight deck and instructed them to begin evacuating the aircraft. The forward left door (1L), slide inflated normally but then twisted and when it could not be detached, the forward right door (1R) was opened but although the slide there inflated normally, it then began to deflate. The other forward-stationed cabin crew attempted to deploy a life raft from the 1R door, but this also deflated and passengers were then redirected to the overwing exits. The cabin crew at the rear reported realising that the aircraft was in water and had therefore blocked both rear exits and instructed passengers to put on their life jackets and use the overwing exits, which had both already been opened by passengers.

Two of the three remaining life rafts carried on the aircraft were deployed off the trailing edges of both wings and attached to them by lines. Once full of passengers, these were unhooked by the cabin crew so that RFFS personnel who were standing in the water could take them to the shore and then returned to the wings to repeat the process until there were no more passengers waiting. The fourth life raft was retrieved and launched from the right overwing exit but began to deflate and was only used once so the final six passengers and remaining crew were then taken ashore by a rescue boat. On reaching dry land, all occupants were checked for any injuries and only one instance of a minor injury was found.

The Captain stated during subsequent interviews that when he attempted manual braking during the landing roll, “the aircraft did not decelerate and he did not recollect any antiskid activation”. However, he also said that he had never considered a go-around and that, as far as he knew, the runway had not been contaminated. Both pilots stated that ATC had not volunteered runway condition or braking action reports and CVR data showed that the crew had not requested such information.

The Captain of another aircraft which was parked on the ramp and preparing for a passenger flight at the time of the excursion stated to the Investigation that “there had been a lot of lightning in the area before (the accident flight) landed but none at the time of the landing". However, both pilots of this aircraft stated that there was “blinding rain” when the landing occurred and noted that the accident aircraft only became visible to them just before it landed.

The Investigation as to cause focused primarily in understanding what aspects of aircraft handling during the approach and landing and/or landing performance contributed to the overrun.

The tailwind component, the excessive approach speed and the delayed manual deployment of the speedbrakes all increased the energy with which the airplane departed the runway and contributed to the severity of the accident. However, an assessment of actual landing performance showed that even if the aircraft had landed at the applicable VREF and within the TDZ, it would not have been able to stop before reaching the end of runway because of standing water - with depths close to that meeting the definition of “flooded” - on parts of the runway. The likely role of aquaplaning in the failure to decelerate was therefore examined.

White tyre marks were found over the entire length of the landing roll and provided evidence that the main landing gear had remained in contact with the runway throughout rather than being lifted clear of it which would have occurred if dynamic aquaplaning had occurred. This and the extremely low wheel braking friction coefficient actually achieved were instead considered to indicate that the viscous aquaplaning had occurred. This type of aquaplaning is associated with the build-up of water pressure under the tyre “due to viscosity in a thin film of water between a portion of the tyre footprint and the runway surface”. In this situation, the maximum wheel braking friction coefficient on a wet runway decreases with increasing speed.

The Probable Cause of the accident was determined by the Board as “An extreme loss of braking friction due to heavy rain and the water depth on the un-grooved runway, which resulted in viscous hydroplaning”.

A Contributory Factor to the accident was identified as:

Two Contributory Factors to the unstabilised approach were identified as:

The Final Report of the Investigation was published on 4 August 2021. No Safety Recommendations were made.