On 28 October 2007, a Boeing 737-800 under the command of a Training Captain occupying the supernumerary crew seat touched down off an ILS Cat 1 approach 870 metres short of the runway at Katowice in fog at night with the AP still engaged. The somewhat protracted investigation did not lead to a Final Report until over 10 years later. This attributed the accident to crew failure to discontinue an obviously unstable approach and it being flown with RVR below the applicable minima. The fact that the commander was not seated at the controls was noted with concern.

On 28 October 2007, a Boeing 737-800 (EC-HBM) being operated by Air Europa on a passenger flight from Beirut to Katowice as AE911 with crew line training apparently in progress touched down well before the destination landing runway 27 off an ILS approach in night IMC in fog. The aircraft reached the runway and taxied in without informing ATC or any other airport agency of the mishap. None of the 122 occupants was injured but substantial damage was subsequently discovered to have been caused to both the aircraft and the approach lighting. The crew then left the airport without making any report of the accident or damage to the approach lighting, despite being aware of it. 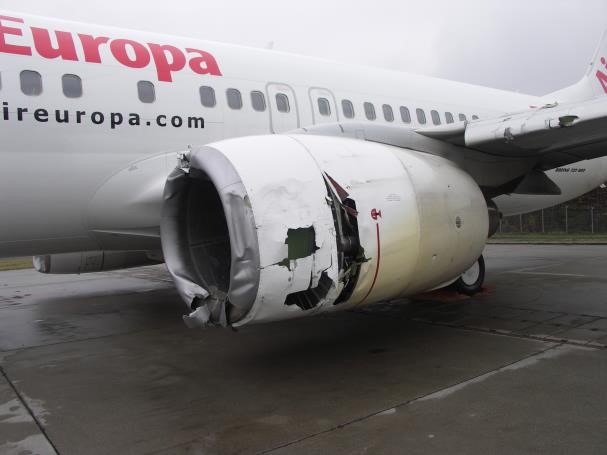 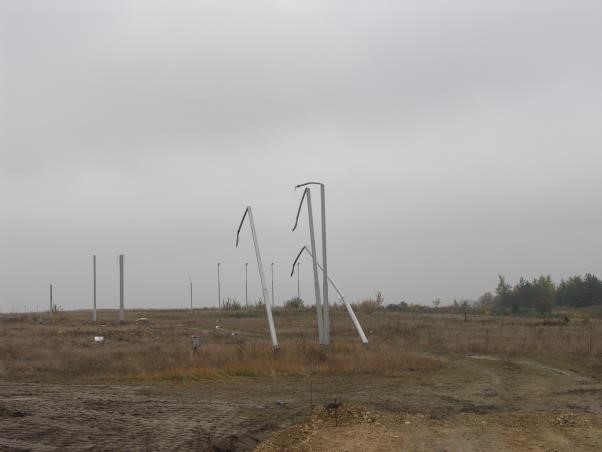 An Investigation was carried out by the Polish State Commission on Aircraft Accident Investigation (SCAAI). The FDR and 2 hour CVR were removed and the data successfully downloaded. 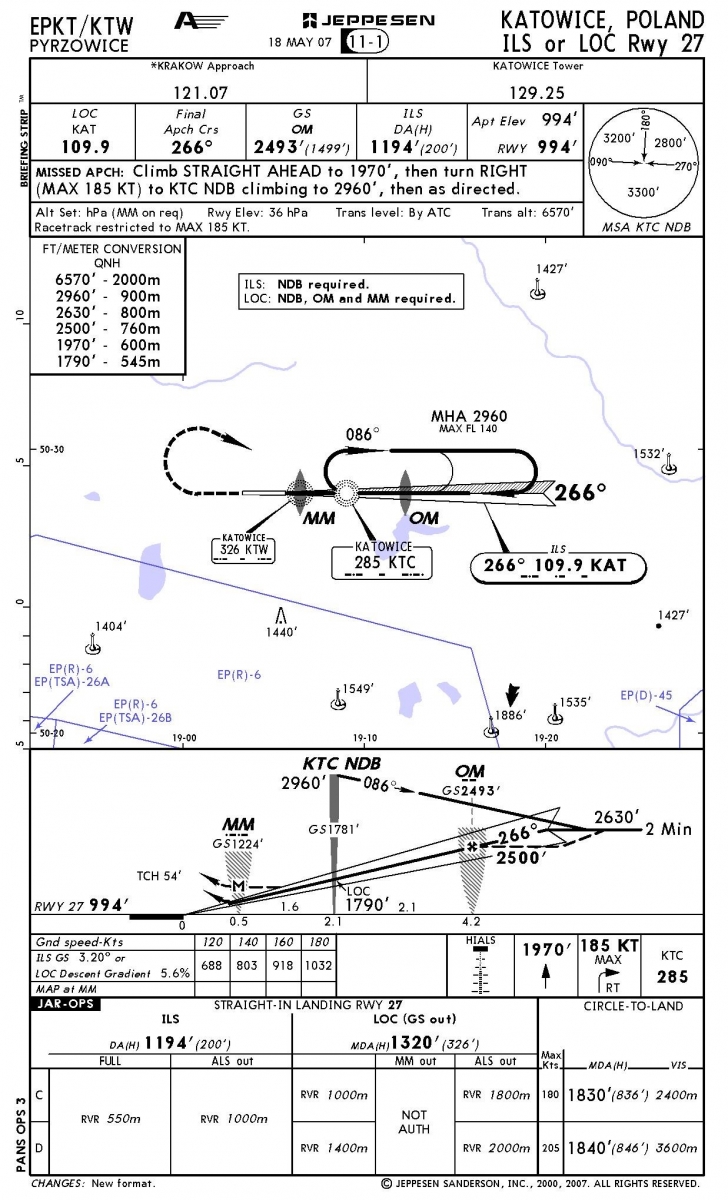 The Runway 27 ILS Approach Chart used by the Crew. (Reproduced from the Official Report)

Substantial impact damage to the aircraft was found to have been sustained by the skin and flaps of both wings, the horizontal stabiliser, the engines and to the landing gear hydraulic system, the latter resulting in an external leak of hydraulic mist from the aircraft which necessitated the attending RFFS personnel donning protective equipment. The report of a survey carried out by Boeing and supplied to the Investigation listed 123 aircraft items as damaged due to the accident. Some aircraft debris was deposited around the impact-damaged approach lighting, almost all of which - 66 approach lights and 20 flashing lights as well as “other elements of the lighting system” - had been effectively destroyed.

TWR cleared the aircraft to report over the KTC NDB in preparation for a procedural ILS approach. The First Officer suggested that because of the low visibility “the approach should be performed according to the published procedure” (see the illustration above) but the Captain decided instead to self position to a straight-in approach “to reduce fuel consumption”. Three minutes later, with the AP engaged, the aircraft joined the ILS LOC just over 6nm from the landing runway threshold in landing configuration at approximately 3,100 feet agl, well above the ILS GS (off-scale fly down, an FDR-recorded deviation of 5.62 dots) and descending at 1,560 fpm with the engines at flight idle. A landing clearance was given along with (below minima) RVRs of 500 metres, 500 metres and 900 metres and the crew requested that the approach lighting be set to “full intensity” which was actioned by TWR. An excessive rate of descent was maintained in an attempt to reach the ILS GS and the aircraft overflew the KTC NDB (2.1 nm from the runway threshold) about 300 feet higher than prescribed by the procedure.

With the First Officer still as PF the aircraft reached the ILS GS at 388 feet agl and as it continued to descend at over 1,600 fpm, an EGPWS ‘SINK RATE’ Alert was annunciated - and repeated 7 seconds later followed immediately by a three-second long ‘WHOOP WHOOP PULL UP’ EGPWS Warning at a recorded 163 feet agl with a recorded rate of descent of 1,760 fpm. As this ceased, the Captain called (lights) “in sight” and ”I have it” but did not disconnect the AP. Further ‘SINK RATE’ Alerts followed at 50 feet agl and the first impact with an obstruction - presumed to be an approach light - followed 2 seconds later with main landing gear compression recorded. A bounce was followed and three further touch downs before the aircraft finally settled after which reverse thrust was selected. As the aircraft reached the runway and continued decelerating, the A/T and subsequently the AP were disengaged and on reaching taxi speed, a 180° turn was made in order to backtrack to the exit. The aircraft was taxied to the assigned gate during which time the Captain was recorded as saying that they should report the damage to the approach lights to ATC but was dissuaded from doing this by the Training Captain. The crew subsequently left the airport for their hotel without making any report about the accident, a failure which was considered by the Investigation to have constituted “a violation of the rules of conduct in the area of aviation safety” and as such had also been “contrary to the ethics of a professional pilot”.

It was found that the increase in pitch (against the force of the still engaged AP) which was initiated in an attempt to regain the ILS GS had prevented a hard touchdown and that as a result of this, damage to the aircraft had been largely due to impact with the approach lighting. It was estimated that the aircraft touchdown had occurred “approximately 870 metres ahead of the runway 27 threshold”. The aircraft final airborne and ground track and its airborne vertical profile relative to the ILS GS is shown below.

The Investigation considered the CVR evidence of crew interaction and concluded that the aircraft commander had maintained an entirely passive role and that critically, not only had both he and the operating Captain allowed the approach to continue when the RVR was below landing minima but had also not intervened when the continued high rate of descent at flight idle clearly constituted an unstable approach. It was also noted that the First Officer had failed to automatically commence a go around when the required visual reference was not available at DA. The absence of any crew response to the EGPWS ‘SINK RATE’ and ‘PULL UP’ annunciations was noted. 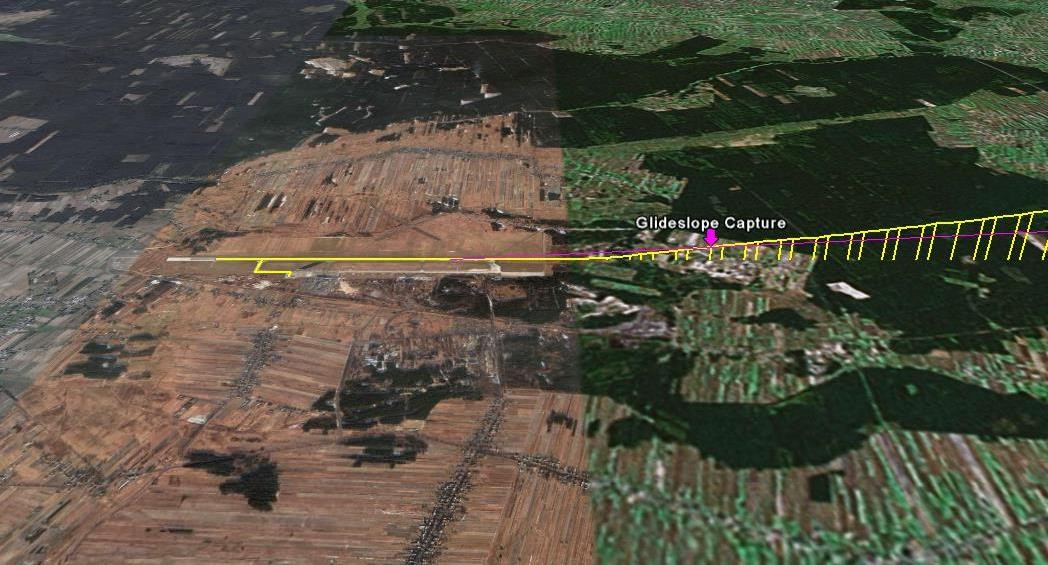 A reconstruction of the final approach profile and post-touchdown ground track. (Reproduced from the Official Report)

It was found that the failure of the AP to capture the ILS GS when it had finally been reached at 388 feet agl was the result of the continued high rate of descent and the closeness of the GS transmitter. This had triggered the aircraft’s ‘BEAM ANOMALY DETECTION’ response and with the AP still engaged, the aircraft had attempted to maintain the existing rate of descent. No evidence of a continued airworthiness factor relevant to the circumstances of the accident was found in respect of this or any other system.

The summarised Findings of the Investigation included the following:

The Cause of the accident was formally stated as “failure to execute a missed approach procedure despite the failure to meet the criteria for a stabilised approach during an attempt to intercept the ILS G/S from above at an excessive descent rate under meteorological conditions below the minimum for the aerodrome”.

Comprehensive Comments by Air Europa on a final draft of the Investigation Report were submitted on 8 November 2017. The Findings of the Investigation were all accepted and the many significant changes in Standard Operating Procedures (SOPs) and the introduction of an SMS and OFDM since the Accident were noted. SOP changes had included the introduction of a requirement for the pilot in command to be seated at the controls. It was also confirmed that following the accident, an internal investigation had been carried out and its final report shared with the Spanish CIAIAC, the Accident Investigation Agency of the State of Registration and of the Operator. In the specific respect of the fact that the crew had left the airport after the accident without reporting the damage caused to the approach lights, this was attributed to the “big emotional impact” suffered by the crew when they realised the extent of damage caused to the aircraft and it was suggested that there had been “no intention to hide the effects of the accident as they were obvious”. It was also observed that whilst the failure to disconnect the AP had materially contributed to the eventual outcome, it had not been intentional but rather a consequence of “the startle effect, the lack of height awareness and the rush to intercept a fly-up glideslope command”. This had led the crew to react instinctively by trying to override the autopilot using manual force instead of the quick disconnect button with the intended override action being unsuccessful because insufficient force had been applied.

The Final Report of the Investigation was completed and published on 20 December 2017.