On 21 March 2008, a Boeing 737-800 being operated by Ryanair on a scheduled passenger flight from Charleroi, Belgium to Limoges carried out a daylight approach at destination followed by a landing in normal ground visibility but during heavy rain and with a strong crosswind which ended with a 50 metre overrun into mud. None of the 181 occupants were injured but both engines were damaged by ingestion of debris.

On 21 March 2008, a Boeing 737-800 being operated by Ryanair on a scheduled passenger flight from Charleroi, Belgium to Limoges carried out a daylight approach at destination followed by a landing in normal ground visibility but during heavy rain and with a strong crosswind which ended with a 50 metre overrun into mud. None of the 181 occupants were injured but both engines were damaged by ingestion of debris.

An Investigation was carried out by the French BEA. It was established that the First Officer had been acting as PF. The crew stated that they did not pay attention to the wind information provided by the controller when the aircraft was on final approach. Unfortunately, a meteorological analysis showed that a cold front had, as forecast, been in the immediate vicinity of Limoges at the time of the landing and, as the wind veered, the tail wind component increased considerably, possibly briefly exceeding 30 knots at its worst. Rainfall measurements also showed that the aircraft touched down at the time of very heavy rain - 1.6 mm fell during the six minutes that included the landing.

The surface of the 2440 metre long runway was noted to be of “tarred concrete” and not grooved. It had an upward slope for the first half, but then descended at a maximum gradient of approximately 0.5%. Friction measurements made on a wet runway were recorded to show that the friction level was within the regulatory requirements.

The flight crew used flaps 30° and set the auto-brake to “3“. The applicable Reference Speed (Vref) was 143 knots giving an approach speed of 158 knots taking into account the wind. The Operators FCOM notes that Flap 30° ”improves the handling on landing with a cross wind and gusts, compared to flaps at 40°, which allows a shorter landing.”

Flight Data Recorder (FDR) data showed that the aircraft touched down about 690 metres from the displaced threshold, at an airspeed of 147 knots and a ground speed of 155 knots - an 8 knot tail wind component. Aircraft braking action was on average medium rather than the ‘good’ which would be expected on a wet (uncontaminated) runway. During the landing rollout, the thrust levers were set to “REVERSE IDLE“ and then to “IDLE“ for about ten seconds. Power up on the thrust reversers then took almost eight seconds. 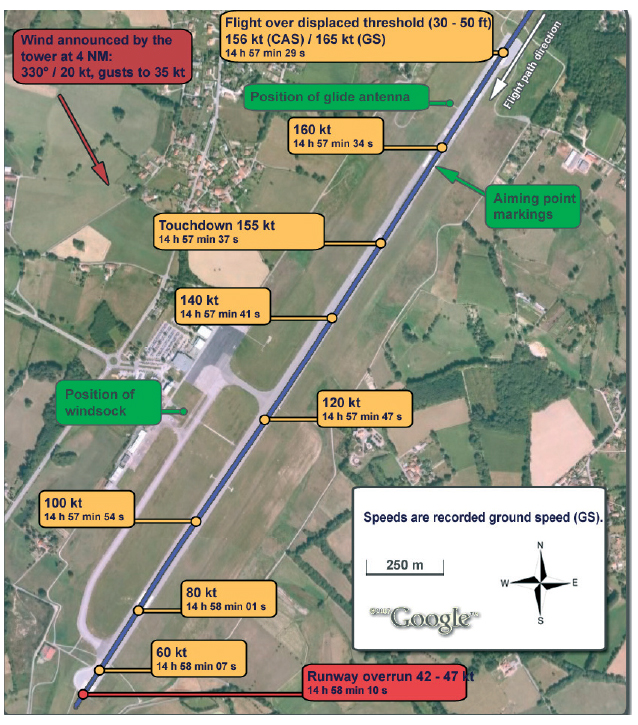 The investigation noted that in such active meteorological conditions as the passage of a cold front, rapid variations in wind direction and intensity, generally accompanied by heavy precipitation, can be expected. As in the case of this accident, consequences for a landing aircraft can include an increased tailwind component and crosswind components which can make lateral control difficult by, in particular, obliging the crew to delay the use of thrust reversers. Precipitation intensity can also temporarily exceed that previously advised and lead to an unexpected reduction in runway surface friction.

It was considered that the accident aircraft crew had not been fully aware of either the intensity of the precipitation and resultant condition of the runway, or of the change in the wind direction. The controller did transmit information including the wet runway and the wind direction, but “the relatively neutral form of (the) message” did not underline these changes and so was not perceived as a warning by the crew.

The Investigation concluded that:

“The regulatory margins, which appear to be adequate in normal conditions on a dry runway, can be considerably reduced or eliminated when a change in the meteorological conditions leads to an accumulation of unfavourable factors. Information on these changes, which can affect flight safety, is essential to crew decision-making.”

The Final Report of the investigation was published on 17 September 2010 and may be seen at SKYbrary bookshelf: BEA Report: ei-f080321a