On 14 November 2019, a Boeing 737 was instructed to stop its takeoff whilst still at low speed when the controller saw snow clearance vehicles entering the runway ahead. The Investigation found that the vehicle group had been cleared to enter the active runway by the ground controller without any coordination with the tower controller and that only the monitoring of surface movement radar and the external environment visually had removed the risk of a more serious consequence arising from the incursion. The airport operator’s snow response plan was not specific to their airport and consequently of limited practical value.

On 14 November 2019, a Boeing 737-800 (7T-VKR) being operated by Air Algérie on a scheduled international passenger flight from Lyon Saint-Exupéry to Annaba Algeria as AH1157 had commenced a night takeoff in normal ground visibility with LVP in force when the controller saw snow clearance vehicles entering the runway ahead and instructed the aircraft to reject its takeoff which it did. The vehicle had been cleared to enter the runway by the GND controller without prior coordination with the TWR controller.

It was noted that around the time of the event, there were four people on duty in the control tower. The GND controller involved had been employed as a controller at the airport since 1999, initially qualified for the GND position and then from 2001 also for the TWR and APP positions. Since 2012, he had been qualified to work in the tower supervisor position and had been in that role initially, before taking the TWR controller position for an hour followed by a 75 minute break before taking over the GND position about 50 minutes before the incursion occurred. The TWR controller involved had been employed at the airport since 2005 and was qualified for GND, TWR and APP positions. He had begun his shift at the same time as the other controller involved and had “mainly occupied the TWR and GND positions” although whilst retaining the TWR position, he had also taken over the APP position about 15 minutes prior to the incursion. A third controller and an assistant who had been covering the APP position prior to it being combined with the TWR position were also in the control room at the time of the incursion.

Earlier in the day, there has been substantial snowfall at the airport and as a result of the significance of the forecast conditions having been underestimated, the runways and access to them were still being cleared late in the evening using two snowploughs with blade widths of 8.4 metres and 6.4 metres respectively. At the time of the investigated event, the wind was light, visibility was 2000 metres in mist, continuous moderate snow was falling and the temperature was 0°C. The runways had been cleared but in other parts of the manoeuvring area, wet snow to a depth of 60 mm remained.

The snow had not occurred unexpectedly. It was noted that a weather warning specific to the airport and valid from 1800 until 0600 the following day had been issued by Météo-France at 1238 and had forecast “5 to 10 cm of snow with a probability of more than 15 cm”. Also, prior to the issue of this warning, Météo-France officers had contacted the aerodrome operator at 0900 to give an advance warning of snow but noted that “their airport contacts were sceptical because of the current temperature”. They also reported having a telephone conversation with the tower supervisor and the aerodrome operator in the early afternoon, in which they “specified that a substantial amount of snow was expected between 1900 and 2100”.

The airport operator had a “Snow Plan” as required by applicable regulations which had been drawn up in conjunction with the ANSP, Météo-France and the French ‘Civil Aviation Safety Directorate’ (DSAC).The Plan as it existed at the time and the way it was implemented on the day of the event were closely examined during the Investigation, particularly in respect of use of the manoeuvring area by snow clearance and associated vehicles and coordination between the GND and TWR controllers when the Plan was in use.

The departing 737 was cleared for pushback and start by the GND controller who then received a call from the lead vehicle for two snowploughs working at the northern end of the parallel taxiway which was using the callsign ‘ELEC8’ asking for clearance to enter runway 35L in order to “do the junction” between the runway and taxiway A3. The GND controller instructed the group to “remain outside the safety area of taxiway A3 and then cleared him to enter the runway, specifying that there was a vehicle on the runway carrying out measurements”. The illustration below depicts the annotated ground tracks of both the 737 and the snow clearance vehicle group in a rising number sequence throughout the lead up to the subsequent conflict. 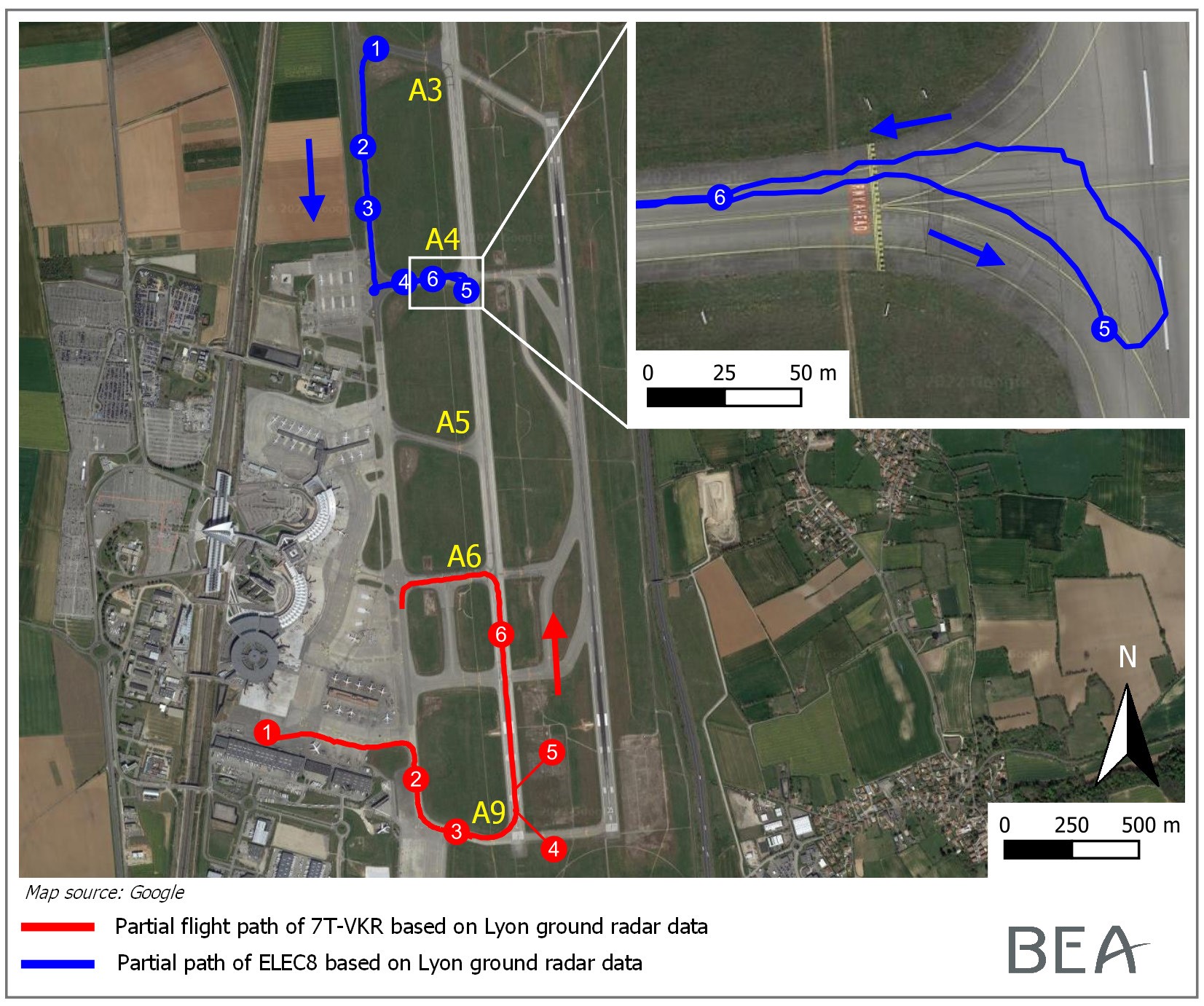 The ground tracks of the vehicle group (blue) and the 737 (red) with numbers which correspond to their shared positions prior to and during the incursion. [Reproduced from the Official Report]

Seven minutes later, the GND controller cleared the 737 to taxi to the A9 CAT III holding point  for runway 35L after which the ‘ELEC8’ informed them that the snowploughs were going to clear snow from taxiway A4 and asked if they could “do the junction” between the taxiway and runway 35L. The GND controller responded by asking the group “hold short of taxiway A4” due to an inbound flight.

The GND controller then advised the 737 that “braking conditions on runway 35L were poor" and subsequently instructed it to remain at the holding point on reaching and change to TWR. On checking in with TWR, the controller instructed the 737 to “advance to the stop bar” and after a further minute advised it to line up and issued takeoff clearance (the aircraft was in red point 3 on the illustration).

As this clearance was being given, ‘ELEC8’ called GND and the controller advised that the group could proceed with removal of snow from taxiway A4 and its junction with the runway. This clearance was read back with confirmation that the vehicle group was now entering runway 35L (blue point 3 on the illustration). Half a minute after the vehicle group led by ‘ELEC8’ entered the runway safety area, the 737 crew set TOGA thrust (red point 4). After five seconds, the TWR controller instructed the 737 to reject the take-off and the crew acknowledged the instruction and immediately complied, with the aircraft reaching a maximum of 63 KCAS before deceleration took effect (the applicable V1 being 118 KCAS) and once at taxi speed, the TWR controller asked the 737 to vacate the runway via taxiway A6.

Three seconds after the 737 had been told to reject its takeoff (red point 5), the GND controller instructed ‘ELEC8’ to lead the two snowploughs off the runway (blue point 5). This took 30 seconds after which ‘ELEC8’ confirmed that the group were clear of the runway. Approximately ten minutes after the first takeoff clearance had been given, the 737 was cleared to line up again at A9 and subsequently departed without further event.

The GND controller involved was relieved of his duties by the tower supervisor immediately after the event.

It was noted that although the vehicle group was given clearance to enter an active runway, it was not transferred to the TWR frequency but instead was kept on the GND frequency and that “whilst this practice existed, it was uncommon”.

Thereafter, the GND controller “did not follow the progression of the snowploughs and did not detect the conflict” and was instead discussing the surface conditions with the tower supervisor to help him with the snow clearance strategy. Fortunately, the TWR controller continued both visual monitoring of the outside environment and the surface movement radar which enabled him to identify the incursion and prompt action to prevent a potential ground collision or the possible consequences of a late avoidance manoeuvre.

It was noted that since LVP were in force, the controllable stop bars at runway entry points would normally be lit to protect in-use runways but at the time of the incursion, the stop bars at A3 and A4 were permanently lit and the one at A6 was permanently unlit. The former status negated their use as a runway incursion prevention tool.

Finally, it was of concern that various aspects of operational complexity in relation to the ‘Snow Plan’ were not helped by the fact that it was “exclusively based on the DSAC procedure (and) does not constitute an aid in making operational decisions about traffic regulation during snow-clearance operations”.

It was noted that DGAC database included at least 14 occurrences between 2015 and 2019 relating to runway or taxiway incursions by snow-clearance vehicles of which 7 had involved the risk of collision with an aircraft. Many of these had involved no radio contact between snow clearance vehicles and the ATC and/or a communication problem between an escorting vehicle and its snowploughs. An investigation into a similar event at Toronto in 2019 was also noted.

The Cause of the Runway Incursion was “an erroneous clearance for vehicles to enter the active runway as a result of a coordination failure between the GND and TWR controllers and a procedure which kept vehicles cleared to enter the runway on the GND frequency".

Four Contributory Factors to the issue of conflicting clearances to enter the runway and to the use of a procedure which kept vehicles on the active runway under GND control were identified as:

Safety Action taken by the Lyon ANSP as a result of the investigated event were noted as having included the issue of a Directive in respect of the frequency to be used when entering the runway safety areas, specifying that the clearance to enter such areas must be given on the TWR frequency. This Directive was subsequently updated to permit the following exceptions in the following cases:

It was noted that nine other safety-related changes has been listed for implementation by a “deadline” of April 2020 but by 10 September 2021, only one had been implemented.

* that the Lyon Control Centre (SNA-CE), in coordination with Aéroports De Lyon, define the decision aid criteria of operation restriction measures in degraded situations (these restrictions may cover the reduction in traffic to the extended closure of a runway or the suspension of operations).

* that the DGAC study whether the decision processes to restrict operations in degraded situations at French aerodromes present similar difficulties to those observed at Lyon Saint-Exupéry airport.

* that Aéroports De Lyon, in coordination with the Lyon Control Centre (SNA-CE), ensure, in a consolidation of the snow/black ice control operational plan, that the conditions are defined for activating a coordination unit to group the decision-makers, to limit the number of information messages and to reduce the workload of the people directly involved in managing the operations.

* that the DGAC ensure that the Snow Plans of French aerodromes do not have similar failings to those brought to light in the occurrence with respect to the planned coordination scenarios, and that these take into account the operational constraints and communication channels actually brought into play.

The Final Report was initially published in the definitive French language on 10 September 2021 and this was followed on 14 February 2022 by an English Language translation.