On 16 August 2018, a Boeing 737-800 made a stabilised approach to Manila during a thunderstorm with intermittent heavy rain but the crew lost adequate visual reference as they arrived over the runway. After a drift sideways across the 60 metre-wide landing runway, a veer off occurred and was immediately followed by a damaging collision with obstructions not compliant with prevailing airport safety standards. The Investigation found that the Captain had ignored go around calls from the First Officer and determined that the corresponding aircraft operator procedures were inadequate as well as faulting significant omissions in the Captain s approach brief.

On 16 August 2018, a Boeing 737-800 (B-5498) being operated by Xiamen Airlines on a scheduled international passenger flight from Xiamen to Manila as CXA8667 sustained substantial damage after departing the side of the destination landing runway during a second attempt to land on the 3737 metre-long, 60 metre-wide runway 24 in night IMC during a thunderstorm and intermittently heavy rain. None of the 165 occupants was injured.

It was established that the Captain had been PF for both approaches and that the first approach had ended up as a go around from 30 feet agl because there was “insufficient visual reference”. A second ILS approach was briefed including a diversion to the planned alternate if another go around had to be flown due to similar conditions being encountered again. A stable approach was then flown with a flap 30 landing planned. The AP was disconnected at 1000 feet agl followed by the A/T and flap 30 was set for landing with the applicable Vref 145 knots. There was no low cloud and despite the presence of a thunderstorm and intermittently heavy rain, the METAR-reported surface visibility was 2000 metres and the required visual reference was reported to have been available at the ILS Cat 1 DA of 375 feet QNH (which was equivalent to a DH of 300 feet).

As the aircraft passed over the runway threshold at about 50 feet agl, the recorded ILS LOC deviation was “around zero” but the aircraft immediately began to drift to the left of the centreline and at a recorded 46 feet agl, the First Officer called “GO-AROUND” but the Captain responded “NO” and began to retard both thrust levers towards idle at 30 feet agl and they reached full idle passing 5 feet agl with the aircraft in the “de-crab” position prior to touchdown. At 13 feet agl, the aircraft was rolling left and continuing to drift and at 10 feet agl, the First Officer again called “GO-AROUND” but again received the response “NO” from the Captain followed this time by “IT’S OKAY”. Touchdown followed at Vref+6 knots with the surface wind at that point recorded as from 275° at 9 knots.

Touchdown was on both main gears and occurred 740 metres past the runway 24 threshold and to the left of the centreline. The recorded aircraft heading was 241° and speed brake deployment and pre-set auto braking commenced (although the auto brake was subsequently disengaged for undetermined reasons) but reverse thrust was not selected. The aircraft continued to track away from the runway centreline and quickly departed the left side of the paved surface at a recorded groundspeed of 147 knots. Initially, it continued parallel to the runway and almost immediately all landing gear legs and the left engine then hit some concrete electric junction boxes that were just beyond the paved surface. These impacts resulted in the left main gear and left engine being sheared off and the right main gear and nose gear being folded rearwards. The aircraft then turned to the left as it continued to decelerate and came to a stop on a heading of 120° approximately 1,500 meters from the threshold of Runway 24. During the sequence of events from touchdown until the aircraft came to a full stop, it was noted that the First Officer had made two further calls of “GO-AROUND”.

Once the aircraft had come to a complete stop, the pilots carried out all memory items from the evacuation non-normal checklist and then continued to complete the remaining items including extension of the flaps to the 40° position to facilitate safe evacuation via the over wing exits. It was not possible to order a cabin evacuation by means of a PA from the flight deck or use the interphone to speak with the cabin crew as the whole aircraft communications system had failed. It was considered that this may have arisen due to damage to the under floor avionics bay caused by the rearward collapse of the nose landing gear. The Captain therefore instructed the First Officer to go into the cabin and announce the emergency evacuation from there. The cabin crew then began the evacuation using (only) the left and right forward doors and their slides and no injuries were sustained as a result of it. 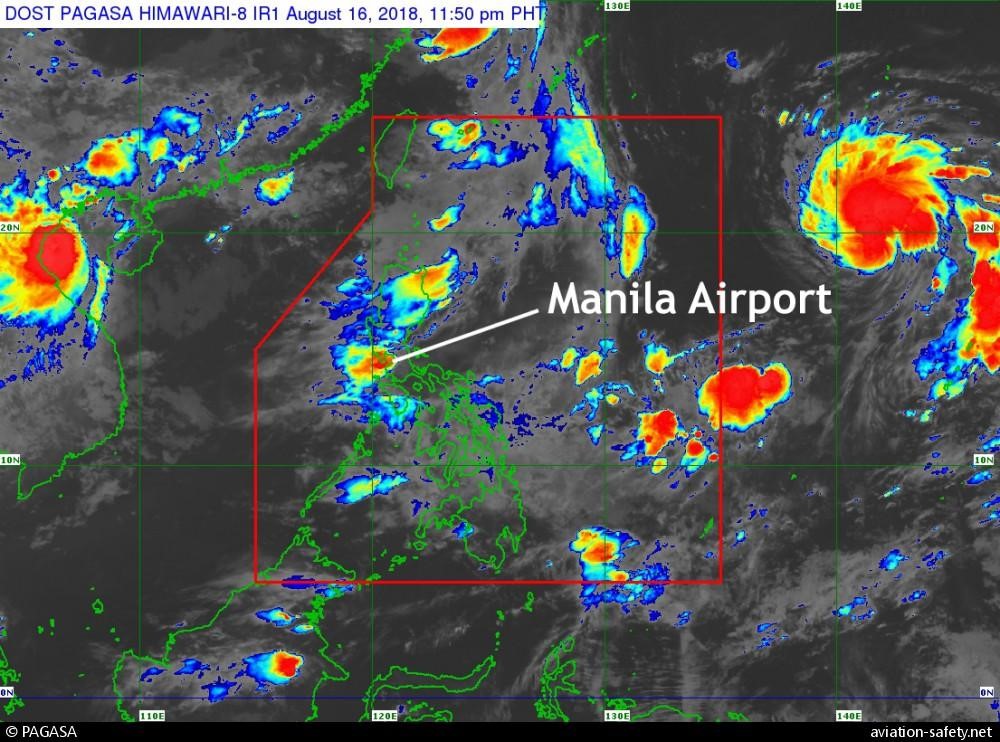 The satellite weather radar picture as recorded five minutes prior to the time of the accident and showing severe convective weather over the airport [© the Philippine Atmospheric, Geophysical and Astronomical Services Administration]

No evidence was found that any airworthiness issue had been a factor in the accident and there was no evidence that the crew had not followed all relevant SOPs in the FCOM prior to 50 feet agl - the accident had resulted from the way the aircraft was controlled thereafter. However, the damage to / detachment of the aircraft landing gear and the detachment of the left engine was a direct consequence of the electrical junction box impacts and it was noted that the location of these was “inconsistent with the CAA Philippines Aerodrome Manual of Standards (MOS)”, neither was it aligned with the corresponding ICAO SARPs and supporting guidance material. The Investigation also found that the post-accident recovery of the disabled aircraft had been hindered by the absence of lifting capacity which as per the corresponding airport operator manual was only required to be capable of a 50 tonne lift.

The Primary Cause of the Accident was determined as the decision of the Captain to continue with the landing after the approach became unstabilised moments before touchdown in heavy rain and then failing to correctly identify the position of the aircraft in relation to the runway due to insufficient visual reference because of precipitation so that the aircraft rolled left and continuously drifted to the left of the runway centreline. It was also found that the Captain had failed to apply sound CRM practices and in particular had not heeded the First Officer’s calls for a go around.

Safety Action taken as a result of this Accident were noted as having included but not been limited to the following:

The Manila Airport Authority reinstated the runway 06/24 strip and its concrete electric junction boxes so that it is now in compliance with the required transition slope as well as with the standards contained in the CAAP Manual of Standards for Aerodromes and in ICAO documentation which may compromise the safety of aircraft if not met.