On 21 November 2019, with variable cross/tailwind components prevailing, a Boeing 737-800 went around from its first ILS approach to Odesa before successfully touching down from its second. It then initially veered left off the runway before regaining it after around 550 metres with two of the three landing gear legs collapsed. An emergency evacuation followed once stopped. The Investigation attributed the excursion to inappropriate directional control inputs just before but especially after touchdown, particularly a large and rapid nosewheel steering input at 130 knots which made a skid inevitable. Impact damage was also caused to runway and taxiway lighting.

On 21 November 2019, a Boeing 737-800 (TC-JGZ) being operated by Turkish Airlines on an international passenger flight from Istanbul Ataturk to Odesa as TK467 and making a second ILS approach to runway 16 at destination in night VMC left the side of the runway soon after touchdown before regaining after 550 metres with the nose and right main landing gear legs collapsed and coming to a stop. An emergency evacuation was completed with no injuries to the 142 occupants but the aircraft sustained significant FOD ingestion damage to both engines, damage to the left engine cowling and lower fuselage as well as to the landing gear.

An Investigation into the Accident was carried out by the Ukraine National Bureau of Air Accident Investigations (NBAAI). All relevant data was recovered from both the FDR and two hour CVR with the assistance of the Turkish Transport Safety Investigation Centre due to a lack of any data readout equipment at the NBAAI.

According to the Captain, the flight crew had been fully aware of the potential weather issues in relation to variable wind velocity at Odesa during the pre flight briefing. He noted that the crosswind component was close to the limit. However no other operational constraints in relation to landing were identified. As a precaution, sufficient fuel was uplifted to allow Istanbul to be used as an alternate in the event that a landing at Odesa was not possible.

During descent, having listened to the latest ATIS, which was not significantly different from earlier reports and the forecast, the Captain decided that the flight could continue as planned with the expectation of an ILS approach to runway 16. The ATIS wind represented a crosswind component for landing which was within the applicable 30 knot limit but the tailwind component was potentially around the 15 knot limit based on conversion of the given values in metres per second. The Captain briefed the First Officer to “monitor the value of the cross wind component using the FMC progress page” during final approach but made no mention of the significant tailwind component. He also warned the First Officer about the significant (the CVR recorded him mentioning 90%) chance of a go around being necessary because of the potential consequences of the variable wind velocity conditions. On listening to a subsequent ATIS, little change was apparent. The runway continued to be reported as “dry”.

Initial positioning was via the OGLAR 3Y SID followed by radar vectoring to the runway 16 LOC. Transfer to TWR was followed by a landing clearance and spot (2 minute average) wind check but there was no additional reminder of the still variable wind direction. The approach was initially stabilised and further (similar) wind checks were provided and all, as given, were “within permissible values” but without any reference to the variable wind direction. Forty seconds after a final wind check, a go around was commenced with the crew subsequently advising that the approach had become unstabilised. FDR data subsequently showed that the applicable 153KIAS VREF had been exceeded by 18 knots.

A climb to 3000 feet QNH was followed by radar vectoring for another ILS approach to Runway 16. A new ATIS was copied which was little different to the previous ones. A direct request to ATC for the latest (spot) surface winds was made and those given (in metres per second) were potentially marginally above the 30 knot crosswind limit and as a result, the Captain decided on further holding. A climb to 8000 feet was commenced due to icing at 3000 feet.

Sixteen minutes after beginning the go around, the controller gave the flight updated wind information, this being the only time figures for the extent of the variable wind direction were included. The figures given (with speed converted to knots) were 070º/17 gusting to 25 knots direction varying between 050º and 110º and on hearing this, the flight advised ready for another approach. The subsequent approach was stabilised at 1000 feet aal and remained so thereafter. Straight after the automated ‘minimums’ call, the Captain was recorded on the CVR confirming his intention to land.

The right main landing gear touched first at 444 metres beyond the threshold of the 2,800 metre long runway slightly left of the runway centreline, the left main gear followed almost immediately and the nose landing gear touched down 552 metres beyond the  threshold and 1.5 metres to the left of the centreline. The spoilers were automatically deployed and reverse thrust was selected. A modest right rudder input aimed at correcting the increasingly left of centreline track (4° to the left of the direction of the runway centreline) was made but had no effect and three seconds after deploying reverse thrust, FDR data showed that, with the speed still a 130 knots, the Captain had used the steering tiller to suddenly turn the nose landing gear to the right through a recorded 78º. As subsequently confirmed from rubber marks on the runway, this action led to a skid of the nosewheels which had no corrective effect on the trajectory of the aircraft and caused the tyres to begin to disintegrate.

At a speed of 111 knots, the nose landing gear departed the left side of the 56 metre-wide runway into soil with the rudder deflected to just over half the maximum possible deflection to the right. Shortly after this, the nose landing gear collapsed rearwards and over the next 23 seconds, as the ground speed decreased from 107 knots to 2 knots, the right main gear also collapsed. After a distance of 550 metres to the left of the runway (see the ground track on the illustration below) which was mostly parallel to the runway edge, the aircraft re-entered the runway just after its intersection with the second runway access taxiway before coming to a stop 1,683 metres beyond the runway threshold and 27 metres left of the centreline.

It was noted that the FCTM provides three techniques for landing in strong crosswinds on a dry runway. However, FDR data indicated that the touchdown was made without fully aligning the aircraft with the runway centreline which was explicitly not recommended when landing on dry runways in the presence of strong crosswinds. In the flare, it was also noted that there had also been insufficient into-wind aileron to keep the wings level. 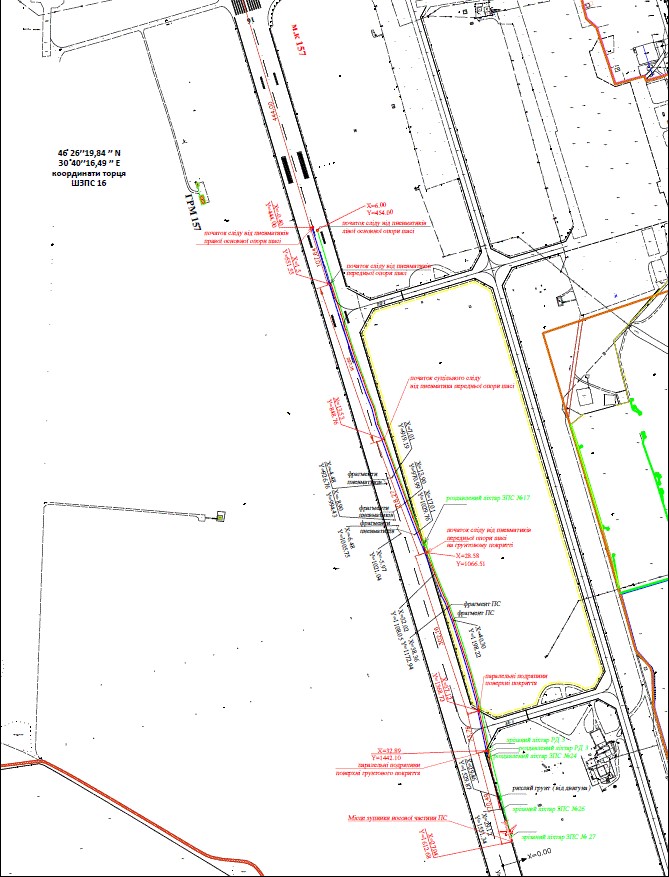 The ground track of the aircraft before, during and after the runway excursion. [Reproduced from the Official Report]

Once the nose landing gear was on the ground, it became difficult to turn the aircraft to the right given the combined effect of the crosswind component, the force of reverse thrust and insufficient rudder deflection angle. The Captains’ decision to make a sudden large input on the nose wheel steering tiller - up to a recorded 78º - when this system is only intended for use at low speed guaranteed that a skid would begin in the existing direction of deviation.

In respect of TWR communicating to the crew the full extent of variations in surface wind velocity, it was considered significant that little attempt was made to pass useful data on the extremes of wind direction when giving wind speed variation given the display available.

The Investigation concluded that the Cause of the runway excursion accident was “failure to maintain the direction of the aircraft movement during the landing roll in a strong and variable crosswind”.

A total of 15 Safety Recommendations were made as a result of the Investigation some of which were in respect of other incidental findings which had no directly causal effect on the excursion:

The Final Report was published on 19 November 2020.