On a 23 October, 2005 a Boeing 737-800 operated by Pegasus Airlines, during night time, commenced a take-off roll on a parallel taxiway at Oslo Airport Gardermoen. The aircraft was observed by ATC and stop instruction was issued resulting in moderate speed rejected take-off (RTO).

On a 23 October, 2005 a Boeing 737-800 being operated by Pegasus Airlines, commenced a night take-off roll on a taxiway parallel to the designated departure runway at Oslo Gardermoen. The aircraft error was observed from the ATC TWR and a stop instruction was issued leading to a rejected take-off (RTO) from a moderate speed.

This is an extract from the Report (SL 20/2006) to serious incident published by the Accident Investigation Board Norway (AIBN):

A Notice to airmen had been issued for RWY 01L: “A1 and A2 clsd, RWY 01L TORA 3200M via A3 and backtrack. RWY 01L not available for landing”. The crew was aware of this and the commander was strongly focused on using the available runway from intersection A3.

The crew taxied, in accordance with their clearance, in a southerly direction on taxiway (TWY) N (see map [Figure 1]). The commander was pilot flying (PF) and the first officer was responsible for radio communication with Air Traffic Services. There was also a third pilot in the cockpit who had newly joined the airline and was being trained. He had no other tasks than to observe. While taxiing in a southerly direction on TWY N the crew was given clearance for take-off on RWY 01L via intersection A3. The first officer acknowledged this with the flight’s radio call sign, and the air traffic controller followed up with clearance to taxi in a southerly direction on RWY 01L, if necessary. The crew had calculated that the runway available from A3 was sufficient for take-off. The stated TORA in AIP for RWY 01L from A3 is 2,696 metres. The red line on the map shows the aircraft's movement. The data source is the airport ground radar. 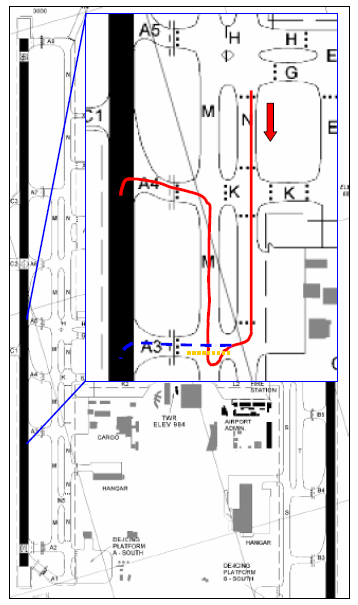 Figure 1 - Section of taxiway and runway layout of Oslo Gardermoen - shown in red is the route taxied by the aircraft. Source: AIBN SL 20/2006.

In her report, the commander says that when they were given clearance for take-off and turned to the right towards A3 she increased the engine rpm slightly and lit the landing lights. She then saw the yellow dashed line across TWY M, south of A3 which marks the intermediate holding point. The commander had a strong focus on the crew making an intersection take-off and that the available RWY was shorter than normal. She knew that the part of the runway to the south of the aircraft was closed, and interpreted the yellow dashed line as a marking of the closed part of the RWY. There and then, this seemed logical to the commander because it “coincided” with the NOTAM. The commander has flown to many different airports in many countries, and claims to be used to ground conditions not always being in accordance with ICAO standards. An airport operator marking a closed part of the RWY in this way was considered absolutely possible by the commander. In hindsight, the commander has no problems in understanding the actual function of this line.

From this point in time, the commander was mentally on the "runway" and, as clearance for take-off had already been given, the take-off procedure was initiated. Because the available runway was shorter than normal, the commander took the aircraft all the way down to the yellow dashed line on TWY M (which she now believed to be the RWY) before turning north to ensure that there was no available runway behind the aircraft. In the control tower, this turn was understood as being the crew turning south on TWY M and the air traffic controller thought that the crew was continuing to taxi southwards here. The air traffic controller therefore called the crew: “Confirm you are entering runway now, seems like you are turning onto Mike”. Continue right turn, right turn and then left again to enter the runway”. The first officer responded “turning right”.

When the right turn had been completed, and the nose of the aircraft pointed towards the north on TWY M, the commander pressed the TO/GA button and the aircraft accelerated to reach take-off speed. The air traffic controller immediately understood what was about to happen when she heard the strong increase in engine rpm. She called the crew immediately: “hold position, you are on taxiway Mike”. The commander says in her report: ” I immediately disconnected the autothrottles, closed the thrust levers and braked just slowly to reduce the speed, almost 80 kts it was”. Because the commander had focused on take-off and the conditions in front of the aircraft when the right turn was completed, she did not notice the illuminated sign “A3, 01L - 19R” which was positioned to the left of the aircraft at the stop line between TWY M and the RWY.

With this acceleration and braking, the aircraft quickly reached intersection A4, 400 m north of A3. The air traffic controller wanted to turn the aircraft to the right here and back on TWY N so that the crew could make a new attempt at take-off via A3. The air traffic controller gave the turn instruction, but the turn was not performed. The first officer said “Alpha 4”. Instead of a right turn the crew turned left towards RWY. […]

The Report uncovers that a playback of the recording of the radio communication from the ATC tapes indicates that the air traffic controller spoke very fast, from120 to 220 words per minute. The Report also makes note that:

Norwegian Aviation Regulations BSL G 5-1 Aeronautical telephony procedures, § 10, part 2 b) prescribes a rate of speech not to exceed 100 words per minute. Exact pronunciation and correct phraseology contributes to reducing the possibility of misunderstandings.

[…]The air traffic controllers in the TWR adjust the intensity of all runway lights as necessary. The centre line lighting on TWY, runway warning lights (wig-wags) and red stop light arrays at the intersections are connected and are adjusted simultaneously in steps 100%, 30% and 10%. Under good visibility conditions during darkness, the intensity of the centre line lights and wig-wags are set at minimum (10%) and the stop line lights are turned off. The yellow intermediate holding point lights would be turned off. RWY lighting is also set at low intensity when visibility is good. These lights are very directional in the direction parallel to the RWY. At low intensity, the RWY edge lights are barely visible when you look at the RWY perpendicular to its length.

The causal and contributory factors to the incident are stated in Comments from the Accident Investigation Board section of the Report: