On 10 November 2008, a Boeing 737-800 about to land at Rome Ciampino Airport flew through a large and dense flock of starlings, which appeared from below the aircraft. After the crew had made an unsuccessful attempt to go around, they lost control due to malfunction of both engines when full thrust was applied and a very hard impact half way along the runway caused substantial damage to the aircraft. The Investigation concluded that the Captain s decision to attempt a go around after the encounter was inappropriate and that bird risk management measures at the airport had been inadequate.

On 10 November 2008, a Boeing 737-800 (EI-DYG) being operated by Ryanair on a scheduled passenger flight from Frankfurt Hahn to Rome Ciampino as FR4102 flew through a dense flock of birds shortly before landing off an ILS approach to Ciampino’s runway 15 in day VMC. Multiple bird strikes occurred. After loss of engine thrust coincident with an attempt to commence a go around, the aircraft made a sufficiently hard impact with the runway to cause the left main landing gear leg to detach. The aircraft stopped just before reaching the end of the runway and although no emergency evacuation was ordered, the airport fire service discharged foam as a precautionary measure prior to passenger disembarkation using a set of external steps and one of the emergency slides. The runway impact caused minor injuries to 8 of the 172 occupants and substantial damage to the aircraft structure and both its engines. 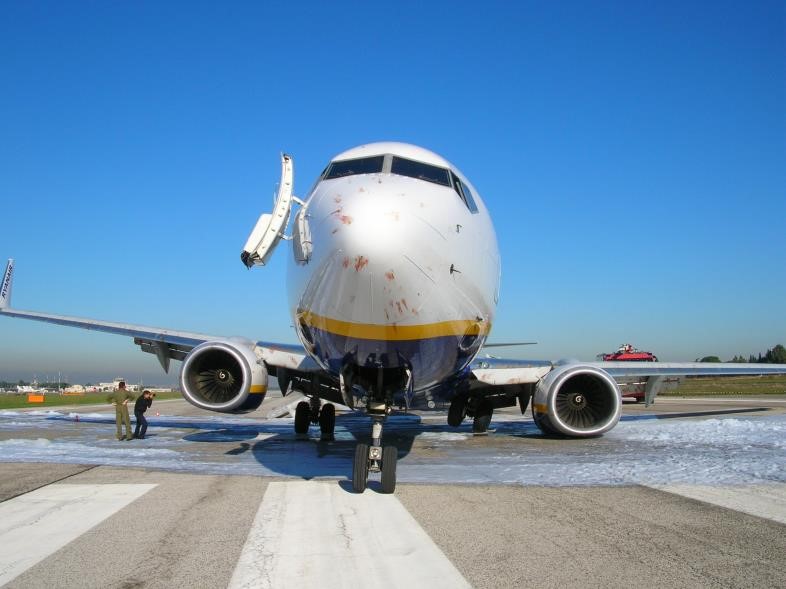 An Investigation was carried out by the Italian ANSV. The available evidence included data successfully downloaded from the FDR and CVR, recorded ATC data and relevant airport procedural documentation as well as interviews with the Captain and statements given by the First Officer, the pilots of two aircraft which witnessed the event and the TWR controller.

It was found that the 44-year-old Captain was a Belgian National with 9883 total flying hours, which included 6045 hours on type, who had been employed by Ryanair as a Captain for “about 3 years”. It was noted that although he was qualified as a 737 type rating instructor, he was not employed in any training capacity at the airline. The 23-year-old First Officer was a Dutch National who had obtained his CPL (commercial pilot licence) seven months prior to the accident and had a total of 600 total flying hours of which 400 hours were on type.

It was established from the available recorded evidence that, with the First Officer as PF, the crew had briefed for and flown an ILS approach to runway 15 at Ciampino in benign weather which included very light surface winds and CAVOK conditions. This approach was flown for the development and maintenance of pilot skills as permitted by the Operator and at the suggestion of the Captain that day in ‘raw data’ mode. This was initiated as the aircraft passed 16,800 feet in the descent to destination by disconnecting the AP, A/T and FD.

The aircraft was established on the ILS localiser at 10 nm from touchdown and fully established at 8.5 nm and cleared to land. As it passed 500 feet agl, the approach was stabilised as required in accordance with the prevailing criteria. Twenty seconds after passing the ILS DH of 379 feet agl, and at a recorded height of between 136 feet and 112 feet agl with about 100 metres and one second to go until reaching the landing runway threshold, the Captain had responded with surprise to a sighting of the flock of birds ahead and on the flight path and had almost simultaneously called “Go around”, repeating this call three times until TO/GA was selected, at which exact point the bird impact was found to have occurred. Both engines stalled as the First Officer attempted to commence the go around by pitching up to 15° to meet the FD symbol which had appeared when the TO/GA switch was pressed, engine N1 dropped from 63% to around 40% instead of increasing. The aircraft reached 173 feet agl over the next 10 seconds and as it did so, the First Officer called for flaps to 15. The Captain actually selected 10° in error (the relevant procedure specifies 15°, a position protected by a detent in the selector guide which was inadvertently overridden) which was attributed by the Investigation to startle effect) and then immediately took over as PF without any corresponding communication taking place. In the absence of a positive rate of climb, the landing gear was not raised. Having corrected a slight loss of alignment with the runway, which it was suspected had resulted from a slight asymmetry in engine thrust as the go around attempt had been initiated, the Captain reported having recognised that it ought to be possible to get the aircraft onto the runway. However, with the lack of thrust and continued pitch up, two EGPWS SINK RATE calls in quick succession were followed after two seconds by stick shaker activation and entry into an aerodynamic stall with the AoA reaching 21° at 21 feet agl. One second later, the aircraft hit the ground partly on the runway and partly off it about halfway along its 2207 metre length with a recorded 2.66g vertical acceleration.

Initial ground impact was made by the lower part of the fuselage tail and the left main landing gear on the paved surface followed by the right main landing gear contacting the grass adjacent to the right-hand edge of the runway. Initial contact occurred at a forward speed of 121 KCAS, a pitch attitude of about + 10° and a roll attitude of -6°. Almost immediately, the left main landing gear collapsed, and the left engine nacelle came into contact with the runway. The aircraft came to a stop 28 seconds after impact approximately 50 metres from the end of the runway having been aided by spoiler deployment, left engine reverse thrust and right-hand brakes and having fully regained the paved surface. A MAYDAY was declared by the First Officer and acknowledged by TWR soon after the aircraft stopped. After the Airport Fire Service had attended and discharged fire-retardant foam on those parts of the aircraft which were in contact with the runway, the Captain elected to disembark all occupants using a ladder truck positioned at the R1 door and use of the R2 (rearmost) door emergency slide. No injuries were recorded as sustained during this non-standard but non-emergency disembarkation.

No prior ATC warning of bird activity in the vicinity of the airport had been given directly to the flight or otherwise included in the ATIS. The TWR controller subsequently stated that “whilst the aircraft was overflying the Airport Lighting System for RWY 15, a dense flock of birds took flight from the trees close to the flight path in particular from the east of it before colliding with the aircraft as it was on very short final approach”. He described the aircraft as then taking a nose-up attitude as if the pilot had decided to make a go around, at which time engine noise increased, with a quick succession of “dull knocks” and “bursts of flame” coming from both engines at the same time. He had then seen the aircraft gain height slightly but immediately afterward pitch down and yaw to the right as it continued to descend to the ground over the runway. Similar accounts were given by other qualified witnesses. 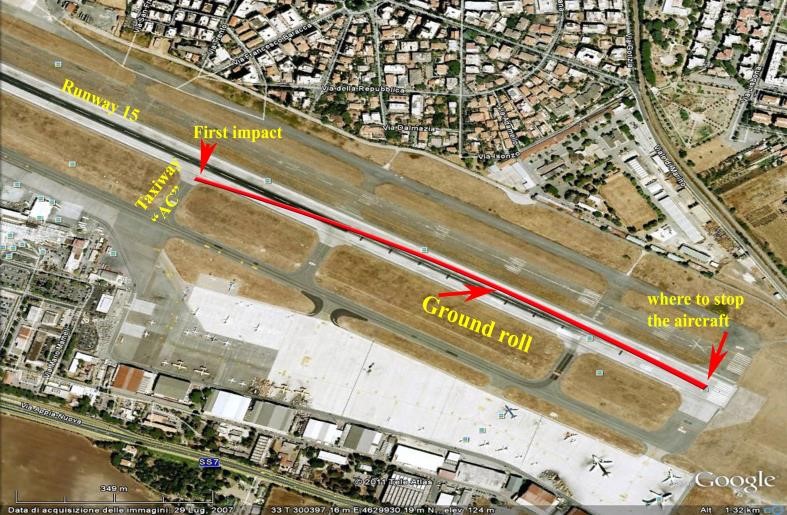 The ground track of the aircraft after impact. [Reproduced from the Official Report]

A total of 86 bird impact points were identified on various parts of the aircraft, there were “numerous and solid organic residues and bird feathers on both stator and rotor blades of the engine fans”, and about 120 bird carcasses were found amongst the approach lighting system about 100 metres prior to the runway 15 threshold. The sole bird species involved was confirmed as Starlings, of which there is a large resident local population. A routine inspection of the airport manoeuvring areas by the Bird Control Unit completed an hour prior to the accident was found to have recorded “no presence of birds”. A similar inspection around sunset the previous day was noted to have recorded the presence of about 1300 starlings which were dispersed using “35 gun salvoes” without the subsequent recovery of any bird carcasses.

The Investigation undertook a comprehensive review of published generic guidance on the avoidance of and response to bird strikes, including a 2011 Boeing-authored review, a 2004 Airbus Flight Operations Briefing Note and a relevant SKYbrary Guidance article. The following summary conclusions were drawn by the Investigation from this review:

The absence at the time of the accident of any EASA, aircraft manufacturer or aircraft operator guidance to pilots in the event of a significant bird strike on short final and the lack of sufficient time to conduct an unguided ad hoc evaluation of risk in such a situation were both noted, as was the contrast with the routine review of risk prior to any takeoff. However, it was also noted that the Captain’s initial audible response to his sudden sighting of an extensive and dense flock of birds had been a series of non-specific exclamations rather than the preferable call of birds sighted in a specific position relative to the aircraft, which would have been more helpful to the PF.

The potential for some pilots to be vulnerable to startle effect in the event of the sudden onset of an unexpected and potentially hazardous situation was recognised, as was the conclusion drawn from other previously-completed investigations that current pilot training does not always promote and assess the capacity to react to the unexpected. It was found that at the time of the accident, there were no training aircraft manufacturer guidelines aimed at managing and mitigating the surprise /startle effects which it was considered had influenced the actions of the Captain.

It was concluded that the Cause of the accident was “an unexpected loss of both engines’ thrust during a go-around manoeuvre commenced after a massive bird strike which prevented the flight crew from performing a successful go around and led to the aircraft’s uncontrolled runway contact”.

Safety Action taken in response to the accident and the safety issues it highlighted was noted as having included, but not been limited to, the following:

The Final Report was published on 20 December 2018. The introduction to the Report notes that “the significant delay in publishing this report is due, on the one hand, to the retirement of some investigators, who, over time, have been appointed as IIC (Investigator-In-Charge), and, on the other hand, to the known shortage of personnel affecting the ANSV investigation area”.