On 6 December 2015, a Boeing 737-800 was being manoeuvred by tug from its departure gate at Singapore to the position where it was permitted to commence taxiing under its own power when the tug lost control of the aircraft, the tow bar broke and the two collided. The Investigation attributed the collision to the way the tug was used and concluded that the thrust during and following engine start was not a contributory factor. Some inconsistency was found between procedures for push back of loaded in-service aircraft promulgated by the airline, its ground handling contractor and the airport operator.

On 6 December 2015, a Boeing 737-800 (9V-MGM) being operated by SilkAir on a scheduled international passenger flight from Singapore to Phuket was being manoeuvred by tug in normal daylight visibility from its parking position at Bay F41 to the position where it was permitted to begin taxiing for departure under its own power when the tug driver experienced difficulty in controlling the movement. When he attempted to stop the aircraft as it approached the designated end of tow position, the towbar broke and the tug and aircraft collided damaging the aircraft. There were no injuries to the 153 occupants of the aircraft or to any other person.

Damage to the aircraft caused by impact with the tug. [Reproduced from the Official Report]

It was established that the required manoeuvring of the departing aircraft from Bay F41 by a tug supplied by the airline’s Ground Service Provider (GSP) was (see the illustration of the apron layout below) to first push the aircraft tail first onto Taxiway C2 so that the tail was turned to the right and then to pull it forward to a marked ‘End Of Tow’ (EOT) position. It can be seen from the illustration that depending on how far back the aircraft had been pushed, the tug may have to steer slightly to the right during the initial pull forward in order to align the aircraft with the centreline of Taxiway C2 by the time it reached the EOT 4 position. The tug was of the ‘traditional’ design and was attached to the aircraft nose landing gear via an approved towbar. The operation of the tug was controlled by the driver who was in contact with a walking headset-equipped supervisor who was also in contact with the flight crew. 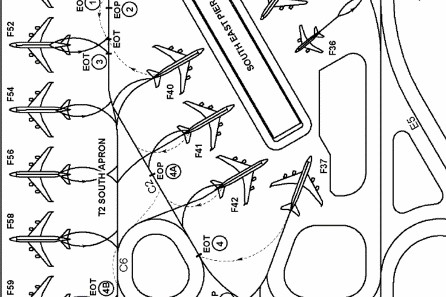 The Location of Bay 41 and the End of Tow (EOT) Line 4. [Reproduced from the Official Report]

As the pushback commenced, the flight crew started the right hand engine and it began to rain - the rain meant that the asphalt surface became wet but not waterlogged. At the completion of the pushback stage, the aircraft was slightly off the C2 taxiway centreline and so as the pull forward began, the tug driver had to align the aircraft with the taxiway centreline during the subsequent pull forward to EOT 4. The right hand engine reached idle thrust soon after the pull forward had begun and in accordance with normal procedures, the flight crew then proceeded to start the aircraft’s left engine after obtaining permission from the GSP supervisor. As this engine start was completed, the tug driver stated that he had “experienced difficulty in controlling the movement of the aircraft” and had sensed that the aircraft was pushing the tug and causing it to accelerate and drift to the left. His attempt to slow down the aircraft by gradually applying the tug brakes did not correct this and the tug continued to drift to the left so he then “applied full brakes to stop the aircraft before reaching EOT 4”. This action led to the towbar breaking and the tug then swung rapidly through 180° to the left (anti-clockwise) and collided with the left side of the aircraft “which had surged forward after the towbar had broken off”. This occurred whilst the left engine was still in the process of spooling up and post-start idle thrust was not reached until 20 seconds after impact. FDR data showed that the aircraft came to a stop 5 seconds after impact and the flight crew applied the parking brake. As the aircraft engines were still running, the tug driver then moved the tug to a “safe distance from the aircraft” for safety reasons. The flight crew eventually shut down the engines and after a visual inspection and assessment of the aircraft damage, it was towed back to Bay F41 by another tug and the passengers were disembarked there.

Structural damage to the aircraft affected an area of approximately 280 cm by 60 cm on the lower left front fuselage just behind the radome. The towbar broke near the end that was connected to the tug’s tow hitch (see the illustration below) and the tug itself sustained damage to its right hand door and mirror and to the 60°- angled stop plate of its tow hitch.

Data from the tug’s IVRD confirmed that its speed had been increasing during the pull forward and had reached 6 knots approximately 23 seconds before it hit the aircraft after which no more speed data was recorded. This recorded speed was consistent with the forward speed of the aircraft recorded by the FDR at about the same point and these data indicated that the speed of the aircraft had gradually increased to and then remained at 7 knots until impact.

The severed tow bar (the severed end is shown in the small panel next to the main picture. [Reproduced from the Official Report]

It was found that the weight of the tug was about 12 tonnes and noted that a post-accident inspection of it had not found any defect which could have contributed to what happened. Similarly, it was established that the integrity of the towbar had not been compromised by “material defects, corrosion or fatigue” and that its failure was attributable solely to stress beyond its design limits.

It was found that the AIP entry on tug manoeuvring of loaded in-service aircraft included the push-pull manoeuvre from F41 and engine starting during it up to idle thrust but “did not prescribe how many engines may be started during the pushback (or) any speed limit for pushback, or pushback with pull forward”. The Airport Operator had issued a ‘Ground Operations Safety Manual’ (GOSM) which “defined the ground handling safety standards for the GSPs” and this required that aircraft should not be pushed back at a speed of more than 5 kph (equivalent to 2.7 knots) and even more slowly if the surface condition was wet. It did not specify if this speed limit was also applicable to a pushback followed by a pull forward or specify how many aircraft engines could be started during a pushback.

The SilkAir Boeing737 Flight Crew Operations Manual was found to state that engine starts may be carried out during pushback, or pushback followed by pull forward so that “other than the restrictions imposed by the AIP”, flight crews may carry out engine start during pushback operations (including pull forward) subject to permission first being obtained from the GSP task supervisor.

The GSPs Engineering Procedures Manual (EPM) was found to allow the start of a second engine during the pull forward for the airline operator’s B737/A319/A320 aircraft and did not prescribe any speed limit during pushback/pull forward of these aircraft types. It was found that although the GSP did not have a Checklist for performing an aircraft departure pushback operation, it did have a “General Aircraft Towing Process Form”. This contained a detailed list of actions which had to be performed for any aircraft towing manoeuvre which, in the ‘pre-towing task team briefing requirement’ under tug driver duties included that the tow speed should not exceed 10 kph (equivalent to 5.4 knots) when a conventional tug and towbar were being used.

Based on the available evidence, the Investigation concluded that the sequence of events which caused the tug to swing round was likely to have been as follows:

It was considered that the tug driver’s sensation that the aircraft had been pushing the tug “could be related to his brake applications” and that the fact that the aircraft was being towed forward “at a relatively high speed” could have exaggerated such a sensation. It was also considered that it was unlikely that thrust from the left engine had contributed to the tug driver’s sensation of the aircraft pushing the tug as the start was not complete as the loss of control occurred and the engine was still well below idle thrust.

Safety Action taken during the conduct of and known to the Investigation included, but were not limited to the following:

The Final Report of the Investigation was issued on 27 April 2017.