On 1 September 2018, a Boeing 737-800, making its second night approach to Sochi beneath a large convective storm with low level windshear reported, floated almost halfway along the wet runway before overrunning it by approximately 400 metres and breaching the perimeter fence before stopping. A small fire did not prevent all occupants from safely evacuating. The Investigation attributed the accident to crew disregard of a number of windshear warnings and a subsequent encounter with horizontal windshear resulting in a late touchdown and noted that the first approach had meant that the crew had been poorly prepared for the second.

On 1 September 2018, a Boeing 737-800 (VQ-BJI) being operated by UTAir on a scheduled domestic passenger flight from Moscow Vnukovo to Sochi as UT579 overran the wet destination runway 06 after touchdown after making a second approach to it in night IMC. The aircraft was substantially damaged but all 172 occupants successfully evacuated the aircraft with just 8 serious and 10 minor injuries to passengers. A fuel fed fire broke out in the left wing but was quickly brought under control. Damage was caused to various aerodrome installations as well as the perimeter fence. 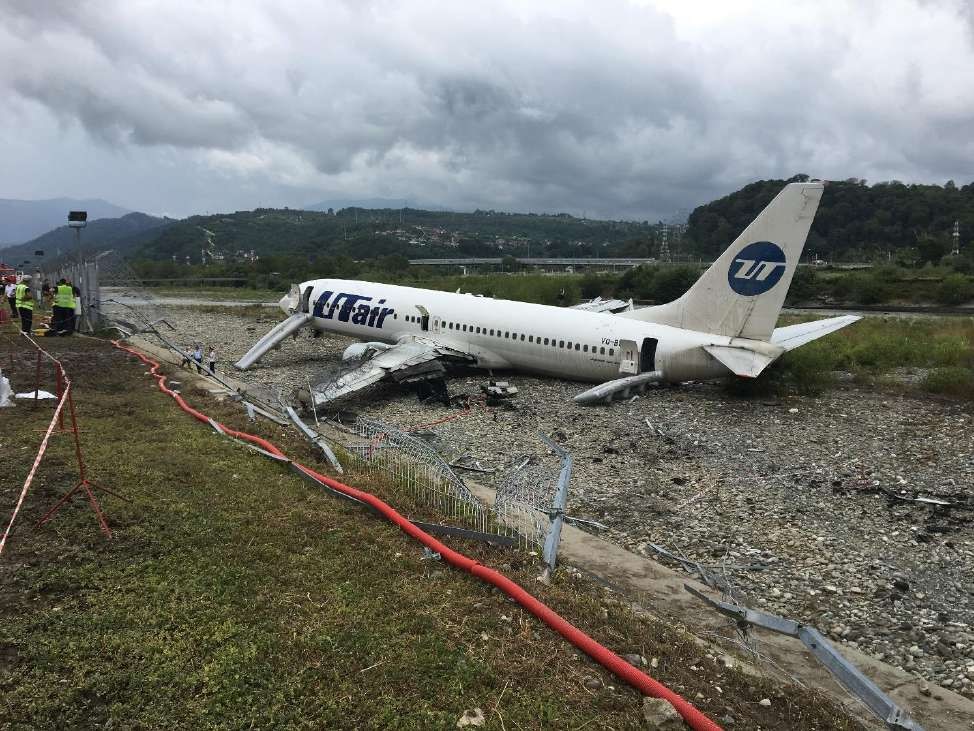 The aircraft at its final stopping position. [Reproduced from the Official Report]

An Investigation was carried out by the Air Accident Investigation Commission of the Interstate Aviation Committee (IAC-MAK). The SSFDR, the SSCVR and the QAR were all recovered undamaged from the aircraft and their data were successfully downloaded and found to cover the whole accident flight.

The flight, with the First Officer as PF, was uneventful until it arrived in the Sochi area whereupon ATC approved own navigation to the initial approach fix (IAF) waypoint ‘PITOP’ (see the illustration below) descending to FL070 so as to allow the crew to use the onboard weather radar to avoid the worst of the convective weather which was persisting over the area as forecast. By then, the flight crew were aware from the ATIS that the thunderstorm activity in the area was producing frequent heavy showers around the airport and that there was “moderate wind shear” in the layer between the ground and 660 feet agl. These conditions were in line with a SIGMET transmitted earlier by VOLMET which advised of a stationary thunderstorm with hail and cumulonimbus cloud tops up to FL380 over and around Sochi. 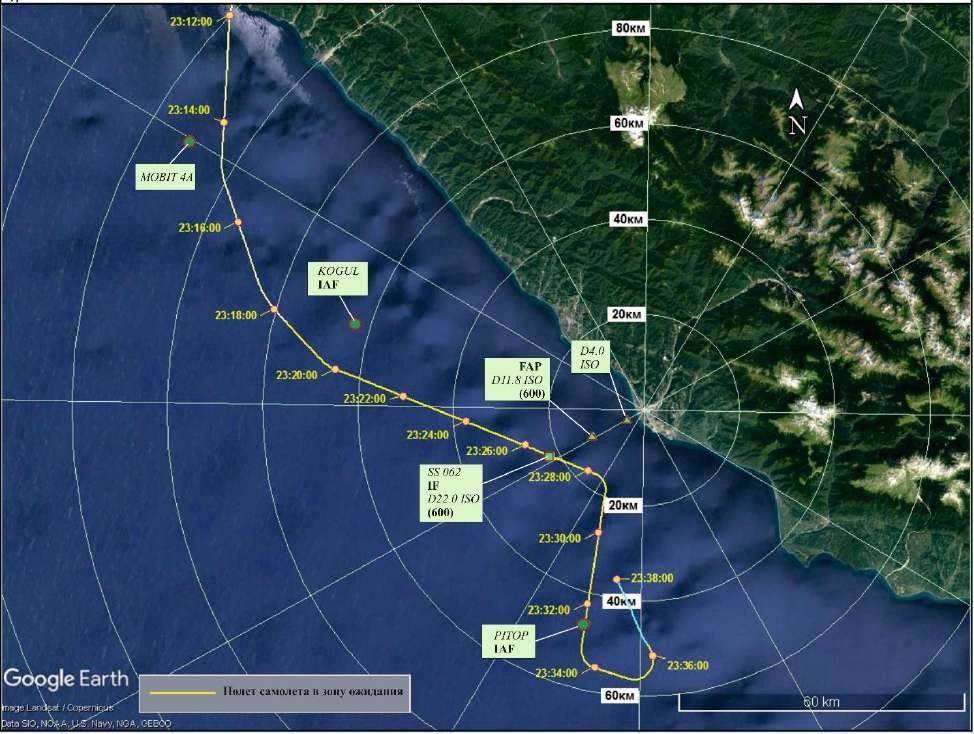 The arrival route of the flight. [Reproduced from the Official Report]

During the descent towards PITOP, the radar controller advised that the visibility had dropped in a heavy squall and that there was 5.8 mm of water on runway 06 which they would be using. Noting that these conditions were outside approach minima, but “fast-changing”, the crew said that they hoped “to find their way between two squalls”. On reaching PITOP, the flight was re-cleared direct to waypoint SS062 to expect an ILS approach to runway 06 (see the illustration below). 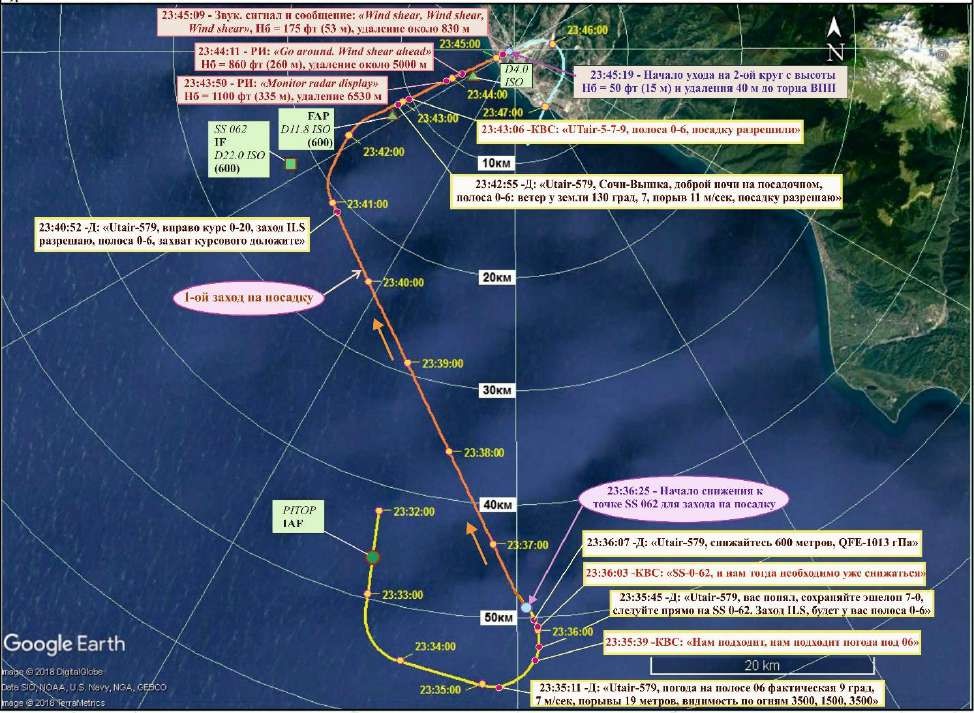 The first approach to a go around. [Reproduced from the Official Report]

An automatic ILS was subsequently flown with the GS intercepted from level flight at 1976 feet QFE. On transfer to TWR, landing clearance was given and soon after this whilst completing the landing checklist and passing 1100 feet, the EGPWS predictive wind shear caution ‘Monitor Radar Display’ was annunciated. On hearing this, the Captain was recorded as saying “what is that about”, to which the First Officer responded with “suppose, about the wind shear” and the Captain said “we will try”. The approach, stabilised when passing 1000 feet, was continued and at 850 feet, with about 2.7 nm to go to the runway 06 threshold, an EGPWS predictive wind shear warning “Go Around Windshear Ahead” was annunciated. The QRH required that in this situation, either a windshear escape manoeuvre or a go around must be flown but the approach was continued with the only recorded verbal response from the Captain being “... the speed is the main issue” to which the First Officer had replied “yes, yes”.

The 627 feet DH was passed and followed by confirmation that both pilots could see the runway and that the First Officer was monitoring the speed. Then, passing 170 feet, an EGPWS ‘Windshear, Windshear, Windshear’ Warning was annunciated indicating an actual windshear encounter and requiring that “the Windshear Escape Manoeuvre be commenced immediately”. No such action immediately followed but when almost immediately the RVRs, which had been previously advised as 3500 metres, 1500 metres and 3500 metres reduced during a heavy shower to the extent that sight of the runway was compromised, the Captain took over as PF and commenced a go around from 50 feet at a distance of 40 metres from the runway threshold, confirming later that this had been because of degraded visibility in heavy rain.

During the go around, climb made as required towards FL100 and with the Captain remaining as PF, CVR data revealed a number of instances language use, procedural error and procedural non-compliance which collectively were considered to evidence both pilots’ now-disrupted psychoemotional state. As the climb continued, ATC advised that there were now no wind gusts above 17 knots and that the RVRs were all at least 2400 metres. The crew decided to make another approach and were cleared to descend from 8500 feet to 2000 feet and again position via waypoint SS062 for another runway 06 ILS approach.

There was evidence of some confusion in configuring the automatics for ILS capture but simultaneous capture of both the LLZ and GS did occur and descent was commenced. On reporting this, TWR gave a landing clearance with a spot wind from 200° at 8 knots - which meant a tailwind component in contrast to the headwind component on the previous approach. Passing 1100 feet, there was another EGPWS ‘Monitor Radar Display’ annunciation and after a further 5 seconds and passing 1050 feet, a EGPWS ‘Go Around, Windshear Ahead’ warning. Neither were discussed and descent on the approach continued. As the aircraft passed the 1000 feet stabilisation gate, it was within the required speed envelope but thereafter it began to fluctuate outside the allowable limits. FDR parameters showed this speed instability could be attributed to wind velocity changes which, with the A/T engaged, had caused it to attempt to maintain the aircraft target speed by commanding large thrust variations - within the range 30% to 90%.

In accordance with the Captain’s prior briefing, the First Officer was calling out speed and height continually, which was assumed to indicate that the Captain wanted to look outside continuously to ensure he had sighted the runway by DH. At about 470 feet with 1½ nm to run, an EGPWS ‘Windshear, Windshear, Windshear’ warning was annunciated indicating an actual windshear encounter and requiring that “the Windshear Escape Manoeuvre be commenced immediately”. As on the first approach, this warning was again ignored. The Captain’s subsequent explanation for this was that “the wrong decision to land was caused by [my] emotional state, I just did not hear the windshear warning, my mind had added it to the flight deck unwanted acoustic overhead”. He added that “it worked so loudly during the first approach and was keeping me off my work, therefore it became an unwanted acoustic overhead instead of a necessary warning system that alarms you".

At 75 feet agl, the Captain disconnected the AP and auto-throttle (A/T) but having overflown the runway threshold at close to 50 feet, the aircraft then floated at a groundspeed which peaked at 178 knots - well over 20 knots above the applicable VREF and did not touch down until 14 seconds after arriving over the runway with 1285 metres of its 2894 metre available length behind the aircraft. Touchdown was immediately followed by automatic spoiler deployment and autobrake at maximum as pre-set but the Captain forgot to select the thrust reversers and was not prompted to do so by the First Officer. The Captain only realised the reversers had not been selected after about 20 seconds by which time there was only 200 metres of runway left so the selection to maximum reverse was only reached after the aircraft had already passed the end and was still at a speed of approximately 75 knots. It was noted that not only did the First Officer not notice the Captain’s failure to select reverse, he had made the call “reversers maximum” immediately after calling “speedbrake up”. However it was concluded that although prompt deployment of the thrust reversers would have reduced the extent of the overrun, it would not have stopped it happening.

The Investigation found no evidence that there was an airworthiness issue with the pre-accident aircraft that could have had any bearing on the accident. However, it was noted that the aircraft braking performance had not corresponded to the braking actions measured and broadcast to inbound aircraft. It was concluded that failure to compensate for the tailwind component on short final and its persistence during the flare had led to the late touchdown. However, compliance with even one of the applicable policies on go-around in the event of the approach becoming unstabilised or an EGPWS windshear warning occurring would have meant the landing attempt would not have been made since the fuel endurance during the second approach had been considerably greater than that required to safely divert.

The Causal Factors of the accident were formally documented as:

A total of 7 Contributory Factors were also identified as follows:

A total of 7 Other Shortcomings revealed in the Investigation were also identified as follows:

A total of 12 Safety Recommendations were issued at the conclusion of the Investigation as follows:

The Investigation was completed on 12 December 2019 and the Final Report in an English language translation was subsequently released.