On 6 November 2014, a Boeing 737-800 taking off at night from Surat hit an object as it was approaching 80 knots and the take-off was immediately rejected. On return to the gate substantial damage was found to the left engine and a runway inspection found one dead buffalo and another live one. The runway was reopened after removal of the carcass but the live buffalo was not removed and was seen again by the runway the following day. The Investigation found a history of inadequate perimeter fencing and inadequate runway inspection practices at the airport.

On 6 November 2014, a Boeing 737-800 (VT-SGK) being operated by Spice Jet on a scheduled domestic passenger flight from Surat to Delhi as SG622 and taking off from Surat in normal night visibility hit an object, subsequently found to have been a buffalo, as it approached 80 knots. Take-off was rejected uneventfully and with no abnormal status indications indicated on the flight deck, the aircraft taxied back to the ramp where substantial damage to the left engine was apparent. A runway inspection then found one dead buffalo and noted the presence of one live one.

After the accident had been reported to the Indian AAIB by the aircraft operator (but not also the airport operator, the Airports Authority of India - AAI), an Investigation was carried out by an Indian AAIB Committee of Inquiry. Data from the SSFDR and SSCVR were downloaded and used to assist the Investigation.

It was established that, after requesting and obtaining departure from the 2,250 metre-long runway 06 in calm wind conditions, the aircraft had been cleared for take-off. As the aircraft was about to pass 80 knots, the Captain reported seeing in his peripheral view something moving towards the aircraft in what he described as "pitch dark" with nothing visible outside the area illuminated by the aircraft landing lights. Immediately afterwards, he heard a “bang” and "it was felt as if the aircraft had gone over a bump". He immediately called and actioned a rejected take-off and ATC was advised of the reject and that a dog had been hit on the left side of the aircraft. Since all the engine and other parameters were normal and there was no sign of fire or vibration, permission to return to the gate was requested and granted.

After arrival on the gate and shut down of the engines, an inspection revealed significant damage to the left engine cowl and holes in the side of the engine, so all passengers were disembarked. ATC did not order a runway inspection and when AFS personnel asked for permission to enter the runway following the accident, they were instructed not to by ATC and were told "all operations are normal and it was an animal hit". Soon afterwards an ATS vehicle requested permission to "cross the runway" from the TWR and, having received it, subsequently reported that there were two buffalos on the runway, one dead approximately 350 metres from the start of runway 04 and one metre north west of its centreline and the other live one still "roaming the runway". In response, ATC immediately closed the runway to allow removal of the carcass and a runway inspection after which it was "declared operational" again, although the second buffalo had not been located - and was "again spotted near the runway a day after the accident".

Damage sustained by the aircraft engine indicated that the buffalo had hit the inner (fuselage) side of the engine at the 7 to 8 o'clock position of the inlet circumference as viewed from the front and the effects of impact had been transmitted longitudinally (see the photographs below). Within the engine, there was damage to 9 fan blades. It was considered that the nature of this damage indicated that the animal had already been on the runway when the aircraft had begun its take-off roll. It was noted that the chances of either pilot seeing it may well have been reduced by the 'night blind spot effect', the occurrence of a central 5-10° cone of reduced visual acuity which may mean an object ahead my go undetected or if detected may fade away. 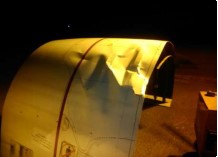 Dents on the fan cowl at the 9 o'clock position. [Reproduced from the Official Report]

The Investigation found that there had been significant gaps in the airport perimeter wall/fence at the time of the accident and that such gaps and related weaknesses had a long history in respect of both their existence and lack of rectification. It was also found that a significant part of the perimeter fence/wall was only accessible from outside the airport and that the whole operational area was covered in thick vegetation of approximately 3-4 feet in height which "acted as camouflage/shelter for wild animals and birds". It also found that both the declared runway inspection regime and the system for recording inspections carried out in accordance with it were not effective.

The Investigation determined that the Probable Cause of the Accident was the collision of the aircraft with an animal (buffalo) standing on the runway during its initial take-off roll resulting in damage to its engine, the animal having entered the operational area and the runway because of several breaches in the perimeter wall.

The Final Report was completed on 3 January 2017 and published the following month.