On 14 July 2007, a Boeing 737-800 being operated by New Zealand airline Polynesian Blue on a scheduled passenger service from Sydney to Christchurch New Zealand commenced take off on Runway 16R with asymmetric thrust set and veered off the side of the runway reaching the intersecting runway 07 before rejected take off action initiated by the flight crew took effect and the aircraft came to a stop.

On 14 July 2007, a Boeing 737-800 being operated by New Zealand airline Polynesian Blue on a scheduled passenger service from Sydney to Christchurch New Zealand commenced take off on Runway 16R with asymmetric thrust set and veered off the side of the runway reaching the intersecting runway 07 before rejected take off action initiated by the flight crew took effect and the aircraft came to a stop.

An Investigation was carried out by the ATSB. It was was established that, with the aircraft commander as PF, the aircraft had entered Runway 16R via Taxiway ‘G’ with the intention of performing a rolling take off from that intersection using reduced thrust. Flight Data Recorder (FDR) data showed that as the aircraft neared this intersection, both engine thrust levers had been advanced together but whilst the left engine N1 had increased to 28%, the right engine N1 had remained steady at 20% RPM, equivalent to Idle.

The aircraft had entered the departure runway a groundspeed of 16 knots with the PF advancing the thrust levers and pressing the TO/GA button as the aircraft turned right onto runway heading with 30° still to go to the runway heading. At this point, the left engine N1 was 41% and the right engine N1 was at 24% with no stabilisation in engine acceleration at 40%. Whilst the thrust levers then moved forward equally towards the take-off thrust setting, engine thrust continued to increase more rapidly on the left engine because of its higher initial N1, and the aircraft continued turning to the right. The PF applied maximum left rudder input, but was unable to prevent the aircraft from turning past the runway heading and so retarded the thrust levers to Idle to reject the take off attempt.

It was found that just prior to the rejected take off action, the left engine N1 had reached the take-off setting of 98% whereas the right engine N1 had only reached 64% and that a maximum groundspeed of 30 knots had been attained. It was also found that the aircraft commander had not appreciated an increasing thrust asymmetry and had instead attributed difficulty in maintaining directional control as a problem with the nose-wheel steering and reacted accordingly with, eventually, maximum left nosewheel steering tiller deflection before the aircraft stopped.

The trajectory of the aircraft and the corresponding FDR parameters are shown on the diagram below taken from the ATSB Investigation Report. 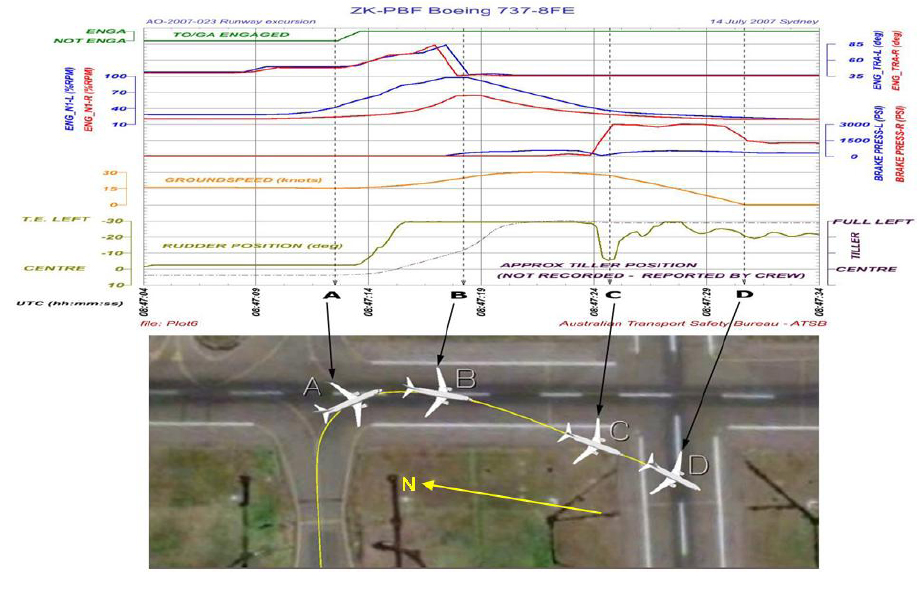 FDR readout from taxi on taxiway ‘G’ until the aircraft stopped

The Investigation focused on the nature of acceleration (spool up) on the engines and included the following content, quoted verbatim, and the referenced “Figure 4” reproduced below, in the Investigation Report:

The slopes of the blue and brown lines during the acceleration phase depicted in Figure 4 are approximately the same. This indicates that, if both engines had accelerated from the same N1 setting, their thrust would have remained symmetrical.

Just prior to the thrust on both engines being reduced, when N1 for each engine was 64% and 98% respectively, the left engine’s thrust would be about three times the right engine’s thrust, which can also be seen from the respective engine fuel flows depicted in Figure 4." 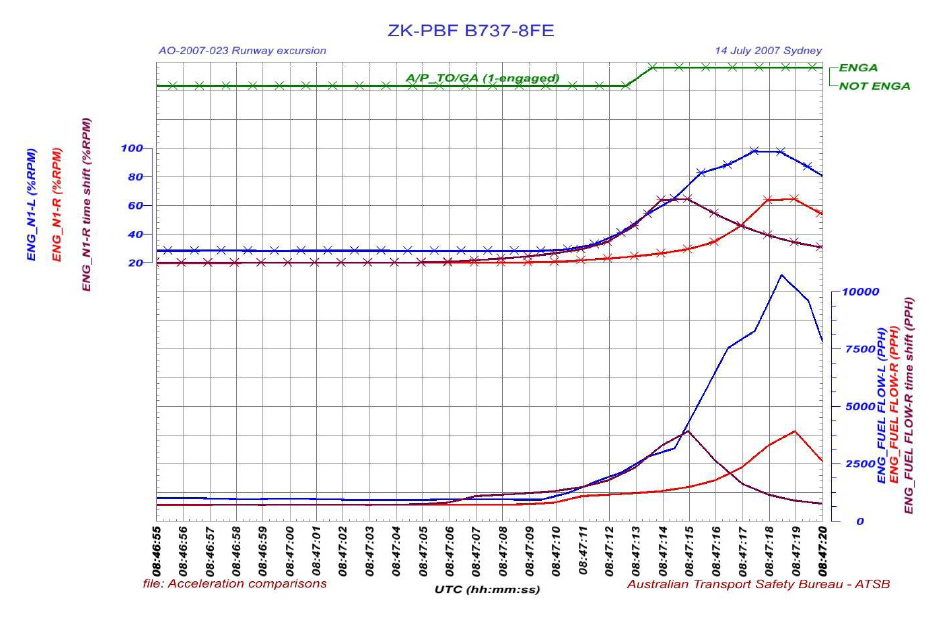 The Investigation noted that, as a result of this occurrence, the aircraft operator initiated a review of procedures for the training syllabus for recurrent and induction training. The review included briefing and assessment on the correct procedure for commencing a take-off roll. The briefing now includes:

In addition, a low-speed rejected takeoff is to be completed during recurrent training and the correct take-off thrust setting procedures have been incorporated in induction training.

The Final Report of the Investigation was published on 18 February 2009 and may be seen at SKYbrary bookshelf: Aviation Occurrence Investigation AO-2007-023 Final