On 29 January 2015, a Boeing 737-800 crew attempting to fly an NDB approach to Bergerac, with prior awareness that it would be necessary because of pre-notified ILS and DME unavailability, descended below 800 feet agl in IMC until an almost 1000 feet per minute descent when still over 8 nm from the runway threshold triggered an EGPWS ‘TERRAIN PULL UP’ warning and the simultaneous initiation of a go-around. The Investigation found that the PF First Officer was unfamiliar with NDB approaches but had not advised the Captain which resulted in confusion and loss of situational awareness by both pilots.

On 29 January 2015, a Boeing 737-800 (EI-EMK) being operated by Ryanair on a scheduled international passenger flight from London Stansted to Bergerac received an EGPWS ‘TERRAIN PULL UP’ warning during an NDB approach to runway 28 at destination in day IMC and the crew simultaneously initiated a go-around. The minimum recorded height was approximately 720 feet agl. A subsequent NDB approach was completed without further event.

An Investigation was commenced by the French Civil Aviation Accident Investigation Agency, the BEA, after notification of the event by ATC the following day. The FDR was removed from the aircraft and sent to the BEA where its data was successfully downloaded. Relevant CVR data was overwritten as the flight crew involved did not report the event until the aircraft had operated both the return flight to London and subsequent flights. Individual interviews with the two pilots were conducted for the Investigation by the Irish AAIU one week after the event had occurred.

The 57 year-old Captain had around 15,000 hours flying experience of which more than 6000 hours were on type. His EASA-issued IR (instrument rating) was endorsed for PBN, a requirement which from 25 August 2020 has since been removed with a new requirement which requires all IRs issued or re-validated from that date to include PBN competency. The 27 year-old First Officer, who was PF for the flight, had obtained his Commercial Pilot Licence (CPL) just over six months prior to the investigated event after completing an ab-initio integrated training course. He had then obtained a Boeing 737 type rating two months later and his IR was endorsed for PBN. He had a total of 430 hours flying experience of which all but 150 hours had been obtained on the Boeing 737. He had begun line training with Ryanair at the end of September and passed his final line check three months later, approximately a month prior to the investigated event.

The flight under investigation was the third of the flight crew’s shared duty period - they had previously flown a London Stansted - Turin rotation. Prior to departure, both pilots were aware that the ILS and DME at Bergerac were out of service. The Captain decided that the First Officer would be PF until he took over for the landing in accordance with the Monitored Approach policy in place at Ryanair. Having also noted that the RNAV (GNSS) approaches for runways 10 and 28 at Bergerac were not listed as available in the operator’s Aerodrome Brief for Bergerac, the Captain determined that an NDB approach would be necessary and an approach briefing subsequently took place accordingly.

An hour after takeoff, the flight was cleared to descend to FL 070 and the Aquitaine APP controller then queried whether the crew could accept an RNAV approach. With the Captain temporarily off frequency in order to obtain the Bergerac ATIS, the First Officer responded with “no...yes” and then requested the Bergerac weather. Two minutes later the APP controller asked again if the crew were intending to make an RNAV approach and this time, the Captain replied that they were going to carry out an NDB approach which was confirmed would be the NDB ‘Y’ approach for runway 28 (the NDB ’Z’ approach to the same runway required a DME so was not available). The applicable MDA for this approach was 840 feet QNH (Bergerac elevation 172 feet amsl) and the missed approach procedure was ahead to 2,500 feet QNH. The NDB procedure available to the crew required a 1 minute 30 second outbound leg followed by a left turn onto final approach with descent from 2,500 feet only commencing once established inbound and subject to crossing the ‘BGC’ NDB, which is located 3.9 nm from the runway threshold, at 1440 feet QNH.

Although the Captain stated that after several attempts by the First Officer to programme the FMS with the NDB ‘Y’ procedure, he was still encountering numerous discontinuities. The Captain added that as a result, he had not been satisfied with the vertical profile of the path created and had therefore asked for the approach to be carried out in HDG and V/S modes. He admitted that he had not then heard any response to this from the First Officer and with hindsight “considered that from this moment, he started to be overloaded with work - he had the impression that he was managing all the aspects of the flight on his own” and it would have been wise to have entered the holding pattern at the ‘BGC’ NDB rather than attempting to proceed directly outbound.

The flight was cleared direct to the ‘BGC’ NDB descending to 2,500 feet QNH and subsequently crossed over it at just over 2700 feet QNH on a heading of 213° with the speed reducing through 216 KCAS, the AP engaged and LNAV and V/S modes selected. On reaching 2,500 feet QNH and still in LNAV mode, a left turn onto a heading of 097° was commenced (point 1 in the illustration below). 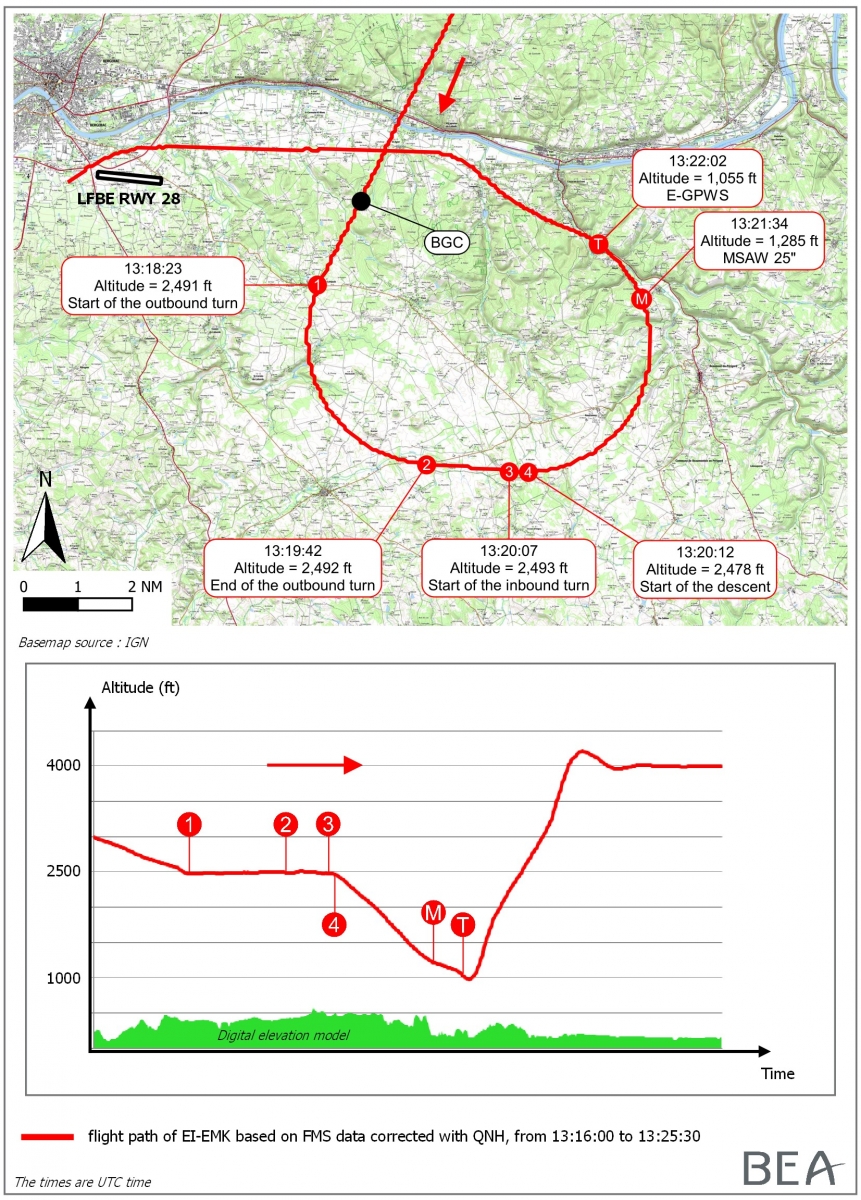 An annotated ground track of the flight’s first approach and the initial part of the go around. [Reproduced from the Official Report]

After completing this turn, an outbound leg lasting 25 seconds was then flown level at 2,500 feet before an LNAV left turn was commenced and, on instructions from the Captain, a descent commenced. This descent was contrary to the procedure requirement to remain at 2,500 feet until inbound and was initiated using V/S mode and a selected rate of descent of 900 fpm. After 26 seconds of this descent, the First Officer increased the selected rate of descent to 1,200 fpm. This was maintained for 40 seconds before being “progressively reduced” to 300 fpm as a left turn towards final approach was commenced. However, since 900 feet QNH was left as the selected altitude instead of selecting the missed approach stop altitude, this action subsequently had the unanticipated consequence that when the ‘ALT ACQ’ mode became active as 900 feet QNH was approached, the rate of descent would suddenly increase.

Soon after the left turn had been started, and as the aircraft turned through a heading of 340° at a recorded altitude of 1,447 feet and at 175 KCAS, the Captain reported that they were “established inbound”, (this despite the fact that the procedure FAT was 274° and there was still 65° of turn to go) and on receiving this call, the APP controller transferred the flight to Bergerac TWR.

Soon after the flight had left the APP frequency but before it had called TWR, the position of the flight (point M on the track illustration) breached the criteria for an MSAW activation at APP control which only occurred because the aircraft was more than 8 nm from the runway - it would have been inhibited within that range because Aquitaine APP were not responsible for ATS below 2500 feet QNH in a specified area around Bergerac airport. Four seconds later, the Captain contacted the TWR controller and, with the aircraft passing 1,240 feet QNH despite still being some way from the ‘BGC’, the flight was cleared to continue the approach.

Twenty seconds later, with the aircraft now at point ‘T’ on the illustration, with the aircraft still more than 8 nm from the runway, at a recorded 842 feet agl and descending at almost 1,000 fpm, an EGPWS ‘TERRAIN’ alert was almost immediately followed by a ‘PULL UP’ Warning which neither pilot could remember hearing. As the ‘PULL UP’ sounded - at 797 feet agl - the crew pushed the TOGA button and initiated a go-around. FDR data showed that the resulting minimum terrain clearance was around 720 feet. Six seconds after the PULL UP Warning, another MSAW activation attributable to the aircraft was recorded by Aquitaine APP and soon after this, the crew told TWR that they were going around. After climbing to 4000 feet QNH and re-contacting APP, the flight then took up the hold at the ‘BGC’ NDB for approximately seven minutes before performing a second NDB ‘Y’ approach procedure to runway 28 and landing off it without further event. In a short discussion thereafter, both pilots recognised that they had lost situational awareness.

Editor’s Note: The Investigation Report does not mention the type of radar available to the Bergerac controllers but it appears from the above to be likely that only primary returns are displayed.

Observations on the Use of Automation

The Investigation was not able to determine with certainty whether the Bergerac runway 28 NDB ‘Y’ procedure was included in the aircraft FMS database but the available evidence tended to suggest that it was not and that the First Officer’s attempts at manually setting it up were not successful in replicating what a pre-programmed procedure would have looked like, in particular with respect to the vertical profile. Given that despite the difficulties in manually setting up the approach in the FMS, the Captain “seems to have been unable to disregard the path displayed by the FMS in order to monitor that the approach was being flown as he wanted it to be flown”. It was considered that “this mixture between different practices and between the associated means probably contributed to his confusion and to his early request to start the descent”.

The arrival over recent years of pre-programmed FMS approach procedures has been particularly beneficial in providing alternatives to procedures which require ground based radio aids including both 2D (lateral-only guidance as in the case of the NDB ‘Y’ approach used in this event) and 3D (lateral and vertical guidance as in the unavailable NDB ‘Z’ approach). It has also often resulted in priority being given to the introduction of 3D RNAV approaches rather than 2D ones for the same runway. These developments have rapidly reduced the sometimes already small number of non precision approaches being flown conventionally in some operators, including timed approaches flown using the HDG and V/S modes to the extent that there may appear to be little incentive to allocate adequate training time to them. The alternative of ceasing to use such rarely encountered procedures altogether is another option for such operators who already recognise that their reliance on them is very low.

Contributory Factors were, in summary documented as follows:

Possible Contributory Factors were, in summary, also identified as follows:

Safety Action taken as a result of the event whilst the Investigation was in progress was noted to have included the following:

The Final Report was published in English translation on 7 September 2020 after the initial and definitive publication in French on 26 June 2020.