On 1 June 2019, a Boeing 737-800 was instructed to go around after it was observed to be significantly below the vertical profile for its RNAV approach as it reached the procedure minimum descent altitude. Having then climbed less than 300 feet, the aircraft began to descend, reaching 457 feet agl before resuming its climb. The Investigation found that the terrain proximity on approach followed a failure to discontinue a comprehensively unstable approach and the terrain proximity episode during the go around was due to continued following of the Flight Director which was providing guidance based on incorrect mode selections.

On 1 June 2019, a Boeing 737-800 (I-NEOT) being operated by Neos on a scheduled international passenger flight from Verona to Bristol was instructed to discontinue its day VMC non precision approach as it reached MDA because it was considered to be dangerously low. It commenced a go around but after climbing less than 300 feet then began to descend over the runway reaching 457 feet agl before resuming its climb. Radar vectoring to a second approach followed without further event.

A Field Investigation was carried out by the UK AAIB. The CVR, FDR and EGPWS were all removed for download and relevant data was obtained. It was noted that the 55 year-old Captain had been acting as PM for the flight until he took over control when the aircraft began to descend soon after the go around had been initiated. He had a total of 14,750 hours flying experience which included 10,770 hours on type. The flying experience of the First Officer was not recorded. The prevailing weather conditions during the investigated approach and go around were in all respects benign and had no bearing on aircraft flight path management.

It was established that on contacting Bristol APP the radar controller in position, who was a trainee undergoing supervised OJT (on-the-job training), advised that they had 33 nm to go and could expect to be cleared for a RNAV(GNSS) approach to runway 27. Ten seconds later, with the flight at FL 100, a reduction to 23 track miles was offered and following crew acceptance, radar vectors towards final approach were provided accordingly. FDR data showed that once descent from FL100 commenced, the crew set the Bristol QNH of 1019, deployed the speed brakes and increased the ‘Selected Airspeed’ to 300 knots. This airspeed was selected despite the fact that the maximum permitted airspeed below this altitude in UK airspace is 250 KIAS. An idle thrust descent at up to 3000 fpm followed as the controller routed the aircraft direct to waypoint ‘ELROV’, the procedure IF on the extended runway centreline at 9.8 nm from the runway threshold. LNAV mode was successfully engaged and, with the airspeed in excess of 300 KCAS, descent continued towards the beginning of the initial approach which began 4 nm before ELROV which was marked on the approach chart as maximum 210 KIAS. This speed was nevertheless exceeded by around 70 knots.

As ELROV was approached, the crew made three attempts to engage the AP in VNAV mode, the first with the airspeed still at 265 KCAS despite continued idle thrust, but were unable to achieve this because of the excessive speed and therefore continued final approach with ‘LVL CHG’ mode selected and the MDA set as the selected altitude. This selection meant that compliance with the SOP which required the go around stop altitude to be set as the selected altitude could not be followed. Soon after the flight passed ELROV, the APP controller, with the recorded airspeed still 241 KCAS with 8nm to go, asked the crew to “start reducing speed please, 190 knots or less”. He then transferred the flight to TWR, advising them “that the aircraft was fast”. The TWR controller noted this but since there was no traffic ahead he had “considered that it was safe to allow the flight to continue”.

Still at idle thrust and at an excessive airspeed, this descent was established at approximately 250 ft below the procedure vertical profile. As the MDA was approached, the ‘ALT AQ’ mode activated causing the rate of descent to decrease but it still remained significantly below profile and also still below the applicable MOCA.

At this point, the TWR controller was involved with an aircraft push back problem on the apron but the Assistant present had become concerned by what they considered was the unusually low altitude of the 737 and drew the controller’s attention to it. The controller stated that on looking, he had considered that the aircraft was “dangerously positioned” as defined in the Manual of Air Traffic Services (MATS) Part 1 and had “instinctively instructed the crew to go-around”. This instruction was acknowledged and a go around commenced with the First Officer flying manually by reference to the FD and TOGA thrust selected. However, because MDA rather than the go around stop altitude was still the selected altitude, the FD command had changed from a climb to a level off on reaching MDA. As it did so, the A/T mode changed from ‘go-around’ to one which maintains the current airspeed and this led to engine thrust reducing below 20° Thrust Lever Angle (TLA). Since the aircraft was configured with flap 15 and the landing gear up, this triggered activation of the gear warning horn.

In response, the selected altitude was changed to the go-around stop altitude of 3,000 feet which led the vertical mode to change from ‘ALT AQ’ to the current ‘V/S’ which was a 300fpm descent. The First Officer as PF continued to follow the FD commands and the gear warning horn remained active. When the flap setting was reduced to flap 5, this caused the A/T to increase thrust above 20° TLA and the gear warning horn, which had been continuously active for 27 seconds, ceased. However, the descent continued and an EGPWS ‘TOO LOW GEAR’ Alert occurred as the aircraft descended through 500 feet agl. After two seconds, the Captain then took control and reinstated the required climb. The minimum height reached as this transition was occurring was 457 feet agl.

When the aircraft climb ceased and became a descent overhead the airport, the TWR Assistant had again drawn the TWR controller’s attention to the aircraft and on seeing where the aircraft was (see the illustration below) this led him to transmit “All Stations Bristol Standby”. Eighteen seconds later, as the aircraft continued to climb, he instructed the flight to climb to and maintain 3000 feet QNH 1018. Once the flight reached and levelled off as instructed, it was transferred to APP radar and vectored to the south of the airport and onto another RNAV (GNSS) approach which was completed to a landing without further event. 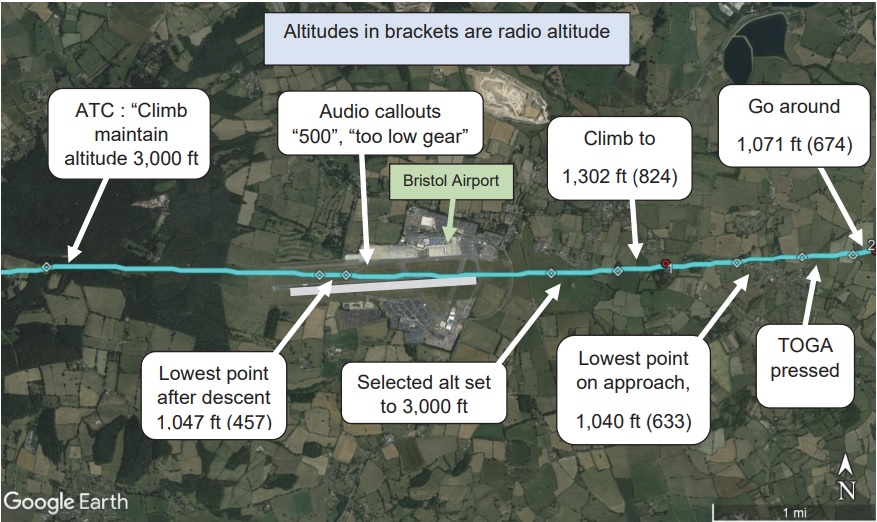 An annotated ground track of the initial part of the go around. [Reproduced from the Official Report]

The Investigation concluded that the whole episode had started with the acceptance of the reduced track miles offer which had failed to consider how a stabilised approach in compliance with speed control could be achieved. Although the track miles reduction was very clearly an offer and not an instruction, it was noted that the operator’s OM explicitly included a requirement to decline any ATC request such as track shortening which “is likely to result in an unstabilised approach”. The consequence of acceptance was a highly unstabilised extremely high speed approach which was continued without hesitation despite the failure to conduct it in accordance with the applicable approach procedure or operator SOPs and then continuing it despite a gross failure to comply with the operator’s stabilised approach criteria. This action led directly to the failure to set the go around altitude, the consequences of which were not promptly recognised. Overall, the available evidence from the whole episode indicated that there had been a sustained period during which normal crew SOPs had been comprehensively ignored.

It was considered that a more experienced APP controller might not have considered it appropriate to offer a track miles reduction given the speed and height of the aircraft but nevertheless “it is the responsibility of the crew to accept or decline any shortcut offered having assessed whether it is suitable (and) it remains the prerogative of the crew to ask for extra track miles to touchdown any time they consider the current distance to be too short”. In respect of the TWR controller’s instinctive instruction to order a go around on sighting aircraft in an undoubtedly unusual position, it was noted that whilst it had not been anticipated, “all crews must be prepared to perform a go-around at any time during an approach”.

The Conclusion of the Investigation was formally documented as follows:

Flying a shortened routing led to a rushed and unstable approach which did not follow the correct vertical flight path. This was observed by ATC who instructed the aircraft to go around. The crew found themselves performing a go-around unexpectedly but did not know why they had been required to do so. The go-around was conducted with a mis-set altitude on the MCP, and neither crew member noticed for a significant period that the aircraft was descending during the manoeuvre.

Crews should always be ready to perform a go-around because there can be many reasons why they might have to, either internal or external to the aircraft, such as on instruction from ATC.

The Final Report of the Investigation was published on 23 April 2020.