On 13 April 2013, a Lion Air Boeing 737-800 flew a day non precision approach to runway 09 at Bali (Denpasar) and continued when the required visual reference was lost below MDA. Despite continued absence of visual reference, the approach was continued until the EGPWS annunciation 'TWENTY', when the aircraft commander called a go around. Almost immediately, the aircraft hit the sea surface to the right of the undershoot area and broke up. All 108 occupants were rescued with only four sustaining serious injury. The Investigation attributed the accident entirely to the actions and inactions of the two pilots.

On 13 April 2013, a Boeing 737-800 (PK-LKS) being operated by Indonesian carrier Lion Air on a scheduled domestic passenger flight from Bandung to Denpasar, Bali as LNI 904 crashed into the sea just short of runway 09 at destination after making a non precision approach and continuing it into Instrument Meteorological Conditions (IMC) below MDA. The aircraft wreckage remained in shallow water near the shoreline and there was no fire and all 108 occupants were rescued with only four sustaining serious injury. 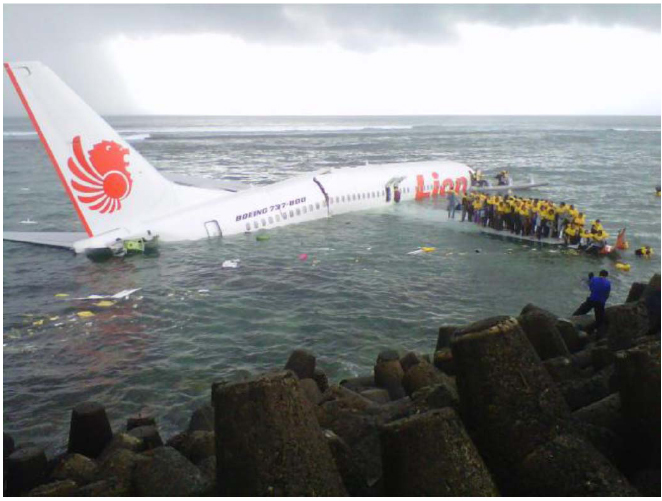 An Investigation was carried out by the Indonesian KNKT (NTSC). The aircraft SSFDR and SSCVR were recovered and successfully downloaded. Analysis of this data allowed the Investigation to confirm that "there were no issues with the aircraft and (that) all systems were operating normally" and the focus then turned to the pilots.

It was established that the aircraft commander was a 48 year old Indonesian with 15,000 hours experience who had been qualified on the 737NG since 2007. The 24 year old Indian First Officer had 1,200 hours flying experience, the majority on the aircraft type. Both pilots were familiar with operations into Bali.

The Approach flown was a VHF Omnidirectional Radio Range (VOR)/Distance Measuring Equipment (DME) to runway 09 for which the prescribed track was over the sea and was offset from the runway centreline by 4°. The Visual Approach Slope Indicator Systems lights were illuminated and the elevation of the threshold of the 3000 metre long runway was 11 feet. The runway lighting was serviceable but not on. The aircraft had been sighted by the TWR controller at 1300 feet Altimeter Pressure Settings and given a landing clearance.

Initial examination of the available recorded data confirmed that the descent had been essentially in accordance with what would have been expected for an aircraft following the procedure both before and initially after the required visual transition made not later than MDA. Having continuously flown slightly above the procedure until the AP and A/T were disconnected at MDA (465 feet), the rate of descent had then slightly exceeded 1000 fpm for 10 seconds. However, the descent had remained well outside the envelope which would have triggered any Terrain Avoidance and Warning System (TAWS) Alert or Warning - see the first diagram below.

On the other hand, the same recorded data showed that the track flown after MDA had been reached had maintained the offset procedure track when the latter was designed to facilitate a visual realignment with the extended runway centreline not later than MDA. The result was that a slow deviation to the right of the extended centreline developed from which there was no corrective or other deviation prior to impact. The second diagram below illustrates this track deviation. 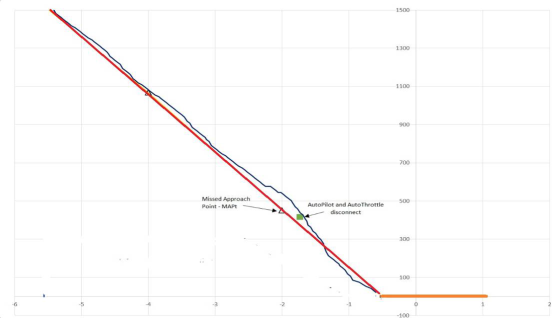 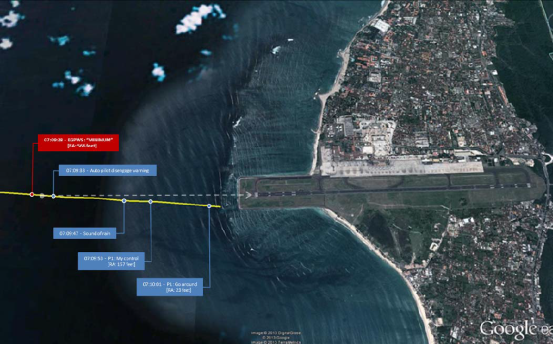 The track flown to impact (Reproduced from the Official Report)

The approach was flown with the First Officer as PF using LNAV and VNAV. There was no mention of MDA as it was passed. Between 300 feet agl and 200 feet agl, heavy rain was audible on the CVR recording and at approximately 150 feet agl, the aircraft commander took control as PF with the First Officer acknowledging "your control…..I can't see the runway". After the EGPWS height call out 'TWENTY', the aircraft commander had called a go around and one second later, impact with the water occurred. The aircraft stopped facing to the north about 20 metres from the shore and approximately 300 metres to the south west of the beginning of runway 09.

TWR were informed by one of the pilots in a aircraft awaiting take off on runway 09 that an aircraft had crashed into the sea near to the 09 threshold and the crash alert was activated. The airport was closed to provide unrestricted access for ARFF vehicles to reach the adjacent shoreline which they did five minutes after impact. Most of the passengers left the aircraft through the right hand overwing exit and the forward right door as these were the exits nearest the shore once the aircraft had ceased moving. Within 45 minutes of the impact, all occupants had been evacuated. The aircraft remained semi-submerged in shallow water (between 2 and 5 metres in depth) throughout this time. It was concluded that all damage subsequently found to the aircraft was "consistent with post accident impact with the sea floor, coral reef and sea wall". 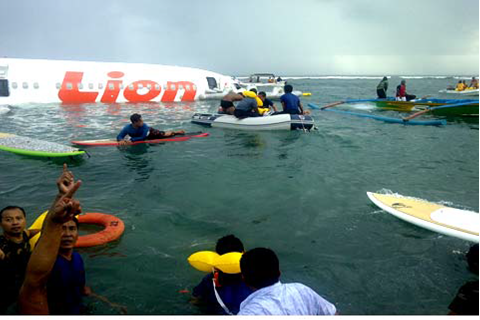 The evacuation in progress (Reproduced from the Official Report)

Although the Meteorological Terminal Air Report (METAR) current at the time had not contained any short term trend of deterioration and the airport CCTV recording showed that the 09 approach had been clear four minutes prior to the approach, a report from the pilot of an aircraft that made an approach 5 nm behind the accident aircraft was noted to have stated that they could not see the runway at MDA and had therefore flown a missed approach. One of two aircraft waiting to take off from 09 reported that, at the time of the accident approach, it was raining and the surface visibility was between 1000 metres and 2000 metres with the accident aircraft evident on the Airborne Collision Avoidance System (ACAS) display at a range of 3nm but not visible. A recording from airport CCTV nearby confirmed a significant deterioration in visibility during the four minutes prior to the impact as an area of heavy rain moved across the approach. The Investigation noted that the airport was not being provided with a system of visibility observation and reporting to the standard envisaged in ICAO Annex 3.

The aircraft commander stated that "the decision to continue the approach while it was raining, was based on his observation that a dark area on the right side of the final approach track was relatively narrow and he expected to be able to see the runway (again) shortly after passing through the rain". He also stated that when the aircraft entered cloud at 300 feet, the outside environment became "totally dark" by 200 feet and added that "this was his first experience flying into such conditions".

Analysis of the way the approach was flown noted that the transition from automatic to manual flight at MDA had resulted in considerable inappropriate variation in both the rate of descent and aircraft pitch contrary to the general principle that airspeed on approach should be maintained by use of power and vertical speed maintained by flying attitude. The Investigation concluded that an examination of the FDR data "indicated that (this) basic principle of jet aircraft flying was not adhered to". No explanation could be found for the failure to go around as soon as the visual reference required below MDA was lost nor for the failure to use the windshield wipers in rain.

In respect of the attempt to commence a go around below 20 feet agl, the Investigation noted that the Boeing 737 FCTM states that an automatic go around initiated at 50 feet is likely to result in a further 30 feet of descent before the climb begins and that ICAO Doc 8168 states that "the pilot reaction time for the required control input is approximately 3 seconds".

It was considered that "the investigation data showed that a series of errors occurred during the approach….such as the absence of callouts, lack of monitoring and (lack of any) crosschecking (of ) both the lateral and vertical path, especially below MDA". As the additional factor of deteriorating visibility was added at low altitude, such a lack of CRM was "potentially more dangerous" and the Operator's CRM principles for managing threat and error were ignored.

The Investigation examined the effect of the ARFF deployment in the context of the re-opening of the airport for some 30 minutes following the initial closure during which time three aircraft up to and including an Airbus A330-300 that had been cleared to take off and six others up to and including an Airbus A330-200 had been cleared to land. CCTV evidence showed that the majority of ARFF capability was committed to the rescue operation during this time and that requirements of the normal RFF cover - Category 9 - were therefore not available. It was noted that shortly before the evacuation was completed the airport was closed again, this time for an hour. It was found that no update on the prevailing RFF category had been issued during the rescue operation.

An Interim Report was issued on 13 May 2013 and included three preliminary Safety Recommendations as follows:

These were not re-stated in the Final Report since by the time the Investigation was completed, new and updated Recommendations had been formulated.

On completion of the Investigation, it was concluded that the following Contributing Factors had led to the accident:

14 new Safety Recommendations were issued at the conclusion of the Investigation as follows:

system to ensure the latest weather information distributes to the pilots representing the ICAO Recommendation.

The Final Report was released on 1 September 2014.