On 31 May 2013, a Boeing 737-800 (EI-ENL) being operated by Ryanair on a scheduled international passenger flight from Palma del Mallorca to Eindhoven as FR3531 was established on the ILS LOC in day IMC with the AP and A/T engaged and APP mode selected but above the GS, when the aircraft suddenly pitched up and stick shaker activation occurred. After a sudden loss of airspeed, the crew recovered control manually and the subsequent approach was completed without further event.

On 31 May 2013, a Boeing 737-800 was radar-vectored onto the ILS LOC at Eindhoven whilst still above the GS after the aircraft was not adequately configured for descent. Soon afterwards, with AP and A/T engaged and APP mode selected, it pitched up rapidly after capturing the GS false upper lobe. As pitch increased to 24º with the AP still engaged after a go-around call, the stick shaker activated. Crew intervention began with pitch at 26.5º and a minimum speed of 97.5KIAS was reached soon afterwards. Recovery to controlled flight was achieved and a second approach was uneventful.

An Investigation was carried out by the Dutch Safety Board. The event was not correctly reported by ATC or by the crew to their Operator and this delayed commencement of the Investigation, until Ryanair reported it after becoming aware as the result of a routine review of QAR data 4 days later. The relevant FDR and 2 hour CVR data from the incident aircraft were both overwritten but the full QAR data was still available and was provided by the Operator upon request.

Instrument Meteorological Conditions (IMC) prevailed during the incident approach with a reported cloud base of 300 feet aal and the surface wind was a light north westerly. The upper wind between 2000 and 3000 feet agl, which would have been displayed to the crew, was subsequently estimated to have been from 010º at 30 knots. It was established that the First Officer had been PF and that military control which provides ATS at Eindhoven had issued their normal left hand base leg radar heading towards the runway 21 ILS LOC and issued a standard descent clearance to achieve a 6 nm capture at 2000 feet. However they had no information about the upper wind and all the earlier arrivals had self-positioned to the ILS so they had been unable to deduce its effect and make allowance for it. At the beginning of this base leg (annotated [1] on the recreated vertical profile and track shown in the two diagrams below), the aircraft was descending at 500 fpm but was above the vertical profile which would allow a 3º descent. The crew failed to correct this as speed was reduced and, coupled with the wind (010º /30 knots effect), remained high as the likely LOC closure range reduced. 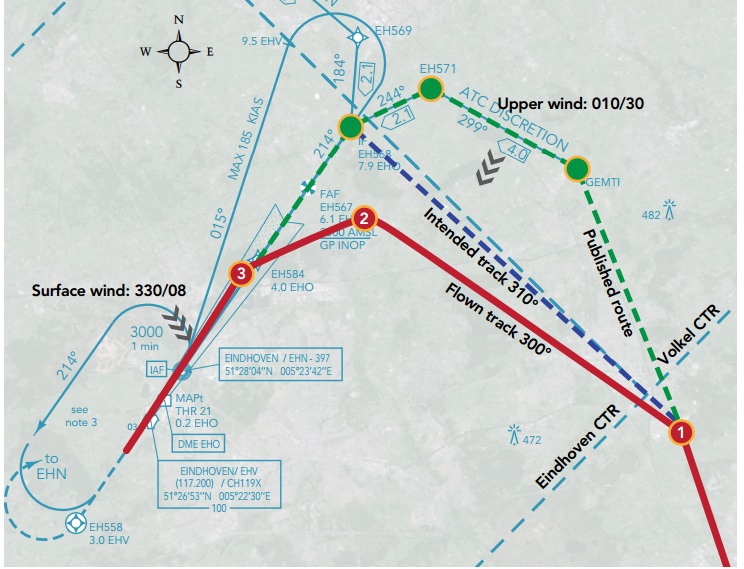 The procedural published route (green), the abbreviated base leg track which ATC attempted to achieve to facilitate a closing heading to a 6 nm capture (blue) and the track made good (red) - reproduced from the Official Report

The aircraft was given a closing heading of 250º at point [2] on the diagram before becoming established on the ILS LOC at approximately 4nm DME - point [3] on the diagram - still well above the ILS GS - and about 2nm closer to the runway than the no wind condition assumed by ATC would have produced. Once on final, with the AP and A/T still engaged and APP mode selected and with a tailwind component present, TWR cleared the aircraft to land. At that point, the Captain "informed the First Officer that it was very unlikely (that) a successful landing would be possible and they should prepare to make a go around". It was noted by the Investigation that the Operator's stabilised approach gate in IMC was 1000 feet aal which if not met required that a go around be flown anyway.

As the aircraft reached 1000 feet aal, approximately 1nm from the runway and around 600 feet above the ILS GS, configured for a flap 40 landing, the GS indicator was observed by the crew to 'come alive' and go to full 'fly up'. The Captain advised the First Officer that "it was probably a false glideslope and called for a go around" but the AP remained engaged. Two seconds later, after the aircraft pitch had changed rapidly from 0.5º down to 24º up and the A/T increased thrust from 30% to 90% in order to maintain the selected airspeed - 135 KIAS - the stick shaker activated. At almost the same time, the First Officer pushed the TOGA button once and the AP was disconnected. As the pitch reached 26.5 degrees nose up, the crew intervened. Airspeed had already rapidly reduced and reached a minimum of 97.5 KCAS two seconds later with the aircraft at 1267 feet QNH and 0.65 nm from the runway threshold. The First Officer continued with the stall recovery manoeuvre and after a further two seconds, stick shaker stopped for one second before restarting. At this point "the Captain helped the First Officer to reduce the AoA in order to regain airspeed resulting in the warning ceasing after (a further) three seconds". The speed was 103 KCAS and increasing and "the crew finished the stall recovery procedure and initiated a climb to 2000 feet to make a second attempt for landing". The aircraft was cleaned up and TWR were informed that a go around was being flown. Radar vectors to a second uneventful approach and landing followed.

It was noted that whilst the crew was aware as they commenced base leg that they were above the vertical profile and aware of "the need to increase the descent rate in order to capture the 3 degree glide slope signal, their predictions (flight path management) about where the 3 degree glide slope signal would be intercepted were incorrect and unrealistic". Crew action to achieve the necessary descent were wholly ineffective. It was concluded that "only a different routing or extensive additional use of speed brakes during the intermediate and base leg of the approach would have significantly improved the descent profile at the start of the final approach".

The Investigation noted that both prior to and following ILS LOC capture, the following indications were available to the crew to support situational awareness:

The Investigation considered that the upset, which had subsequently occurred, could be described as a case of "automation surprise". It was concluded that "the high level of reliable automation in the cockpit can degrade pilot’s basic flying skills for flight path management".

It was noted that the Full Flight Simulators (FFS) available for pilot training were not programmed to pitch up to a false glideslope in the way that the aircraft had (predictably) done. It was also noted that although none of the Operator's aircraft had been fitted with a Vertical Situation Display (VSD) at the time of the investigated event, such a display was available as a retrofit and would have been likely to enhance situational awareness.

In respect of ATC, the Investigation found that TWR had no information or awareness of winds aloft and concluded that, given the surface crosswind affecting the only runway at Eindhoven, "the controller did not take into account the influence of the upper wind when deciding on the runway in use" It also found in respect of the APP radar service provided on the 'Arrival Control' control frequency that:

Safety Action taken or notified as intended as a result of the investigated event was noted as including the following:

The Final Report of the Investigation was published 26 June 2014.