On 22 August 2019, a Boeing 737-800 positioning visually from downwind after accepting clearance to make an approach to and landing on runway 03L at Hyakuri instead lined up on temporarily closed runway 03R and did not commence a go around until around 100 feet agl after seeing a vehicle on the runway and the painted runway threshold identification. The Investigation concluded that the event occurred due to the captain not thoroughly performing the visual recognition of runway, and the FO not adequately monitoring the flight status of the aircraft thus failing to correct the runway misidentification made by the Captain.

On 22 August 2019, a Boeing 737-800 (HL8052) being operated by Eastar Jet on a scheduled international passenger flight from Incheon to Hyakuri and making a visual approach from downwind lined up on the wrong parallel runway and did not commence a very low go around until a vehicle was seen on the runway and the incorrect runway threshold identification was recognised. Visual repositioning to the correct runway was then completed without further event in accordance with ATC instructions.

Prior to commencing descent to destination, the flight crew conducted an approach briefing which confirmed the expected landing runway at Hyakuri as 03L and put the extended centreline of runway 03L into the FMC to assist in flying the expected visual approach to that runway. They then displayed this on their NDs.

On contacting Hyakuri APP, the flight was initially provided with radar vectors and advised that the anticipated visual approach to 03L, the runway used by civil aircraft, could be expected. When about 5nm north-northwest of the airport, both pilots visually confirmed sighting of the airport and its two runways and advised ATC accordingly. The APP controller responded by issuing clearance for a visual approach to the “westside runway” as 03L was commonly called.

On subsequent transfer to Hyakuri Tower, the flight joined downwind and as it was about to commence the turn onto base leg, landing clearance for the westside runway was given. During the turn, the flaps were set to the landing position and, once set, the pre landing checklist was completed. The turn onto finals was completed at about 700 feet aal and as the Captain lined up the aircraft on the white (eastside) military use runway, he perceived it to be the westside one and so disconnected the AP and reported having then “concentrated on stabilising the aircraft attitude, airspeed and rate of descent in order to maintain the (required) stabilised approach”. Meanwhile, the First Officer stated that he had been “concentrating on confirming the indication of instruments in the flight deck”.

As the aircraft completed its turn onto finals for 03R (which is for the use of military aircraft but was in any case temporarily closed) a vehicle was driving north along the centreline carrying out a routine runway inspection. The TWR controller stated that they had “recognised that the aircraft had overshot as it completed the final turn” and, concerned that the flight was approaching the eastside runway, had “reconfirmed” that it was the westside runway (03L) that the aircraft was cleared to land on and added a wind check which the First Officer acknowledged. In response to the “five hundred” call, the Captain responded with “stabilised” and then reported looking up for the first time and seeing that the 03L painted marking was visible on the runway to his left rather than the one ahead and noting a “black object" (the runway inspection vehicle) around the centre of the runway in front of him.

He stated that he had then “wondered for a moment whether to drastically correct the flight path towards the westside runway and continue to land or make a go-around” but decided on the latter. As the aircraft was climbing though “approximately 100 feet agl”, the TWR controller, who had become convinced the aircraft was about to land on 03R and had not received any call that a go around had been self initiated, instructed that one be flown. Re-positioning and a landing on the correct runway were thereafter completed without further event. 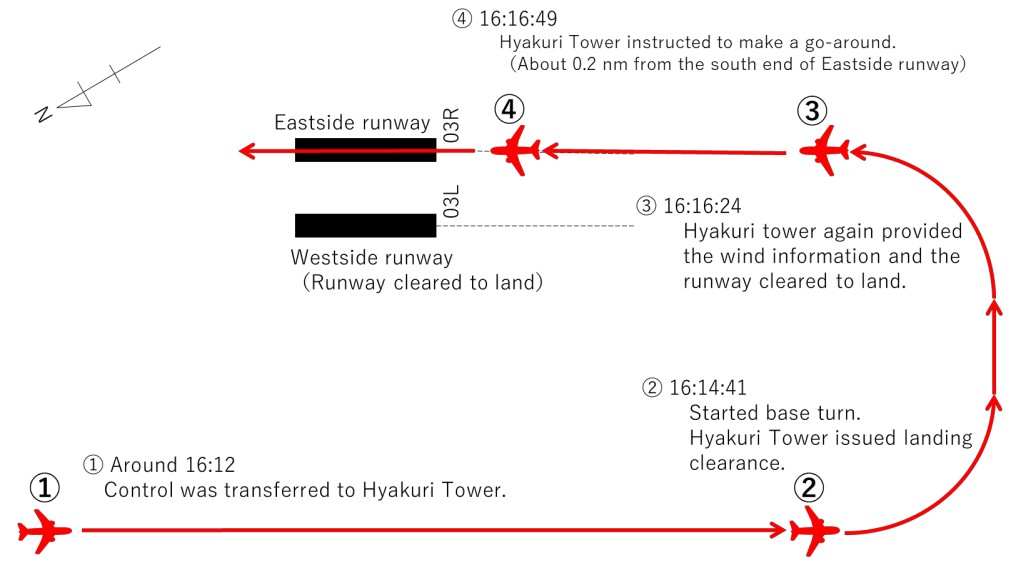 The visual circuit as flown to the wrong runway. [Reproduced from the Official Report]

It was noted that the normally separate civil/military runway use was a permanent arrangement which was associated with aprons adjacent to the outer side of each runway and clearly indicated on promulgated airport information available to the pilots. It was also noted that 03R was a concrete pavement and thus appeared light coloured - and more immediately obvious - than 03L which was asphalt surfaced and was therefore relatively less obvious (see the illustration below).

In respect of the performance of the pilots, it was apparent from statements that the PF Captain had flown significant parts of the visual circuit head down and that the First Officer had comprehensively failed to monitor the Captain’s actions or communicate in any way apart from in respect of the 500 feet stabilised approach call. It was concluded that it was likely that after the Captain and the First Officer had initially confirmed to each other that the two runways were in sight, there had been no further communication between them as to whether the correct runway was in sight. It appeared that despite the fact that a visual circuit was being flown, the First Officer had devoted his attention exclusively to the indications of the flight instruments.

The Investigation determined that the event had constituted a ‘Runway Incursion’ which meant that it was appropriate to classify it in accordance with the ICAO Runway Incursion Severity System as detailed in ICAO Doc 9870 and concluded that it had been a category ‘C’ event. 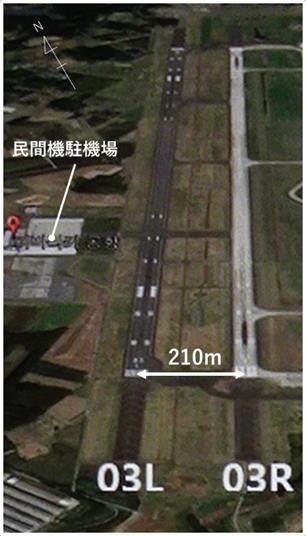 The appearance of the two runways from the air (the air passenger terminal is on the left). [Reproduced from the Official Report]

The Probable Cause of the investigated Serious Incident was determined as the Captain, having misidentified the runway on which the aircraft had been cleared to land, made an approach for a different runway which was occupied by an inspection vehicle.

Two Contributory Factors which led to this potential runway incursion were identified as:

The Final Report was adopted by the JTSB on 5 March 2021 and published in both English translation and the definitive Japanese version on 25 March 2021. No Safety Recommendations were made.