On 5 September 2015, a Boeing 737-800 was about to commence descent on a non-precision final approach at Porto in VMC when a green laser was directed at the aircraft. The Pilot Flying responded rapidly by shielding his eyes and was unaffected but the other pilot looked up, sustained flash blindness and crew coordination was compromised. Subsequently, the approach became unstable and a go around to an uneventful approach to the reciprocal runway direction was completed. The subsequent Investigation noted the use of increasingly powerful green lasers in this way and that such use was not contrary to Portuguese law.

On 5 September, an Irish-operated Boeing 737-800 (EI-FIH) on a scheduled passenger flight from Lille to Porto was on a non-precision approach to destination in VMC at night when the performance of one the pilots was briefly compromised by the effects of flash blindness after a powerful laser was directed at the aircraft. The approach became unstable and a go around to an uneventful further approach and landing followed.

The event was notified to the Portuguese Accident Investigation Agency (the GPIAA) who eventually delegated the Investigation to the Irish AAIU as the State of aircraft registration and of the aircraft operator. Neither FDR nor CVR data were available by the time the Investigation was commenced but the Operator was able to provide QAR data equivalent to that which would have also been recorded on the FDR.

It was established that with the AP and A/T engaged, the aircraft was approaching the beginning of the final descent on the DVOR/DME approach procedure to runway 35 at Porto from an altitude of 3,000 feet when the Co-Pilot had noticed a brief instance of green laser activity from the ground. Since it was reported to be "common" to see laser activity around Porto, the Co-Pilot did not mention the initial detection of it to the PM. However, soon afterwards, a similar laser beam was then directed at the aircraft. Whilst the First Officer shielded his eyes in response and was not affected, the Captain, having observed that the Co-Pilot had lifted his left hand from the thrust levers and placed it in front of his eyes, looked up and was affected by flash blindness in both eyes. She reported that her vision had been "temporarily compromised" to the extent that she stated that she had been "unable to [assist] my pilot flying". The consequence of this temporary loss of crew coordination was that the commencement of the intended descent was slightly delayed and when it did begin, the aircraft was slightly high against the vertical profile and airspeed was allowed to increase as the delayed and slightly steeper than anticipated descent began. At approximately 900 feet aal, having quickly made complete recovery from the effects of the flash blindness episode and recognised that the approach had become unstable, the Captain called for a go around. This action was initiated and with light and variable surface winds, the aircraft was positioned for an ILS approach to runway 17 which was completed to a landing without further event.

The Investigation reviewed extant regulatory guidance material on the potential effects of exposure to laser beams directed at aircraft and noted that it was generally considered that momentary exposure of the eyes to the light emitted by lasers is capable of causing both startle and transient visual impairment. This material also cautions that a visible laser beam which obliquely hits an aircraft windshield is likely to be scattered by its passage through the windscreen layers on emergence and may temporarily completely obliterate a pilot’s forward vision. However, the extent that this represents a hazard to the continued safe flight in a multi-crew aircraft is generally considered to be related to the height of an aircraft above terrain at or soon after the exposure, so that in the investigated case, the actual direct risk to safe flight was low and its indirect consequences - an unstabilised approach - could be dealt with by going around in accordance with SOP.

It was found that in the US, the malicious use of hand held lasers against aircraft appears to have evolved from mixed use of red and green lasers to almost all green ones, the latter being likely to appear up to 35 times brighter than red ones of the same power. It was also noted that FAA studies have shown that "the adverse visual effects from laser exposure are especially debilitating when the eyes are adapted to the low-light level of a cockpit at night (dark-adapted)" which was considered to be of significance since the typical wavelength of most green lasers - 532 nanometres (nm) - is very close to peak eye sensitivity when dark-adapted (see the diagram below). 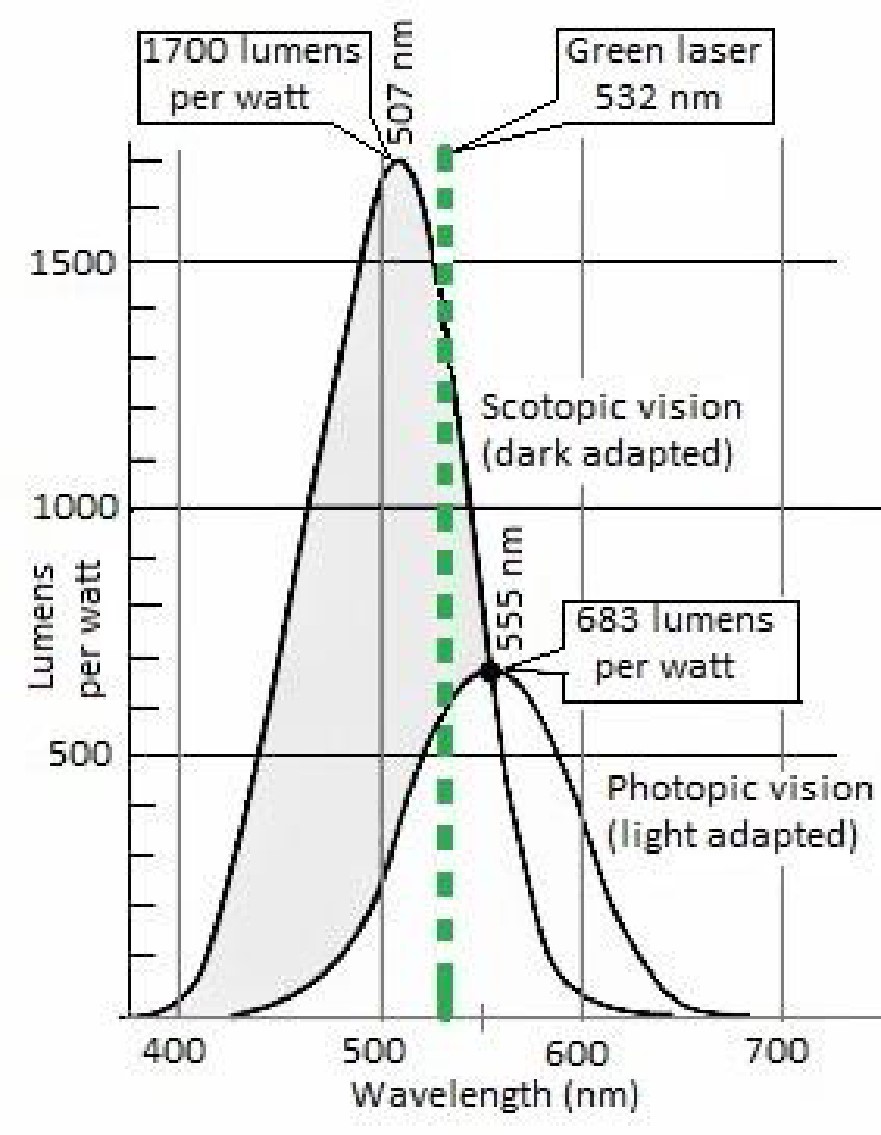 The legislative situation in respect of malicious use of lasers against aircraft was noted to differ according to jurisdiction whereas ICAO Annex 11 requires that "adequate steps shall be taken to prevent emission of laser beams from adversely affecting flight operations".

The Probable Cause of this Serious Incident was identified as "laser illumination of the aircraft cockpit area that caused temporary flashblindness to a flight crew member during a critical phase of flight".

Safety Action taken by the Aircraft Operator as a result of this event and known to the Investigation included the provision of enhanced Operations Manual guidance to pilots in the event of their encountering laser beams in the vicinity of their aircraft.

The Final Report of the Investigation was published on 5 December 2016.