On 8 January 2020, a Boeing 737-800 was destroyed by a ground to air missile when climbing through approximately 4800 feet aal three minutes after takeoff from Tehran for Kiev and its 176 occupants were killed. The Investigation is continuing but it has been confirmed that severe damage and an airborne fire followed the detonation of a proximity missile after a military targeting error, with subsequent ground impact. It is also confirmed that the flight was following its ATC clearance and that a sequence of four separate errors led to two missiles being fired at the aircraft.

On 8 January 2020, a Boeing 737-800 (UR-PSR) being operated by Ukraine International Airlines on a scheduled international passenger flight from Teheran International to Kiev as PS752 was climbing after takeoff at night when it was severely damaged by a ground to air missile and control was lost leading to ground impact 3½ minutes later. All 176 occupants were killed. The Investigation is continuing but significant factual information has been made available.

An Investigation is being carried out by the Aircraft Accident Investigation Board (AAIB) of the Iran Civil Aviation Organisation (CAO). Its reported progress to date has been qualified by the following statement:

The SSFDR and SSCVR were eventually located and recovered from the accident site and their data successfully downloaded. It was noted that although the ELT had been activated at ground impact, its satellite transmitter aerial was simultaneously detached and no detectable signal therefore resulted.

It was noted that there were three pilots on the flight deck, a Training Captain and two others but the rank of the two line pilots, which pilots were in the operating crew seats and whether crew training / checking was in progress has not yet been disclosed. The same crew had operated the earlier inbound flight from Kiev to Teheran and were on a split duty with three hours rest taken at an airport hotel prior to returning to prepare for the return flight to Kiev. The actual takeoff weight (TOW) for the return flight was noted to have been within 32 kg of the aircraft’s 72,500 kg MTOW after it had not been possible to load almost a third by weight of the checked baggage - 82 pieces with an average weight of 25.5kg each.

It has been established that around three minutes after takeoff from runway 29R, the flight was instructed to climb to 6000 feet QNH (the airport is at 3,305 feet amsl) and then turn slightly right direct to waypoint ‘PAROT’ and continue climb to FL 260. Approximately three minutes after takeoff, and climbing as cleared, the flight disappeared from SSR radar display with the last altitude shown as 8,100 feet and no further radio communications were received from it. Soon after this, primary radar then showed it turning to the right for a further three and a half minutes before it crashed and exploded on open ground. Recorded flight data showed that just over a minute after the loss a SSR data, a fire had begun on board and quickly intensified.

The nationality of the passengers and crew on board was documented and showed that the majority of passengers were Iranian nationals about half of whom had dual citizenship elsewhere, especially Canada.

Conclusive evidence that the aircraft had been damaged by a missile warhead was found on the wreckage of the fuselage. The Investigation has ascertained the following facts relating to the erroneous identification of the flight as a legitimate military target and the firing of missiles at it.

A little over 2 hours prior to the flight’s takeoff, civil ATC were informed by the military that, in accordance with a new procedure, only flights already approved by them could be permitted to start engines. Until then, civil ATC had been issuing all civil flight clearances and then providing the relevant information to the civil-military coordination unit. This new procedure was stated as having been “implemented with the aim of more (reliably) ensuring the correct identification of civil flights by the defence network and avoiding targeting them by mistake”. About 1 hour 50 minutes after receipt of this message, the accident flight requested the engine start clearance and the request for approval was submitted as specified and approval granted. The flight subsequently taxied to runway 29R and was cleared for takeoff without delay.

Prior to the takeoff, one of the mobile missile air defence systems in the Teheran area had relocated to a new alignment but there had been “a human error in following the procedure for system north alignment (and) as a result, a 107° error had been introduced into the system”. Thus, by the time the accident flight became airborne, the system operator was seeing the direction of detected objects and targets on a bearing 107° greater than the real bearing. Nevertheless, it was noted that whilst the error had “initiated a hazard chain”, this could be controlled providing other required procedures were correctly implemented.

Two minutes after the takeoff of the accident flight, the missile system operator detected a target at a bearing of 250° flying on a 056° track, which put it on track towards Teheran. However, this target was actually the approaching 737 flying a 309° track. The system operator “notified the specifications of the detected target to the Coordination Centre over the communication network” but the message “was not communicated successfully”. The illustration below shows this. 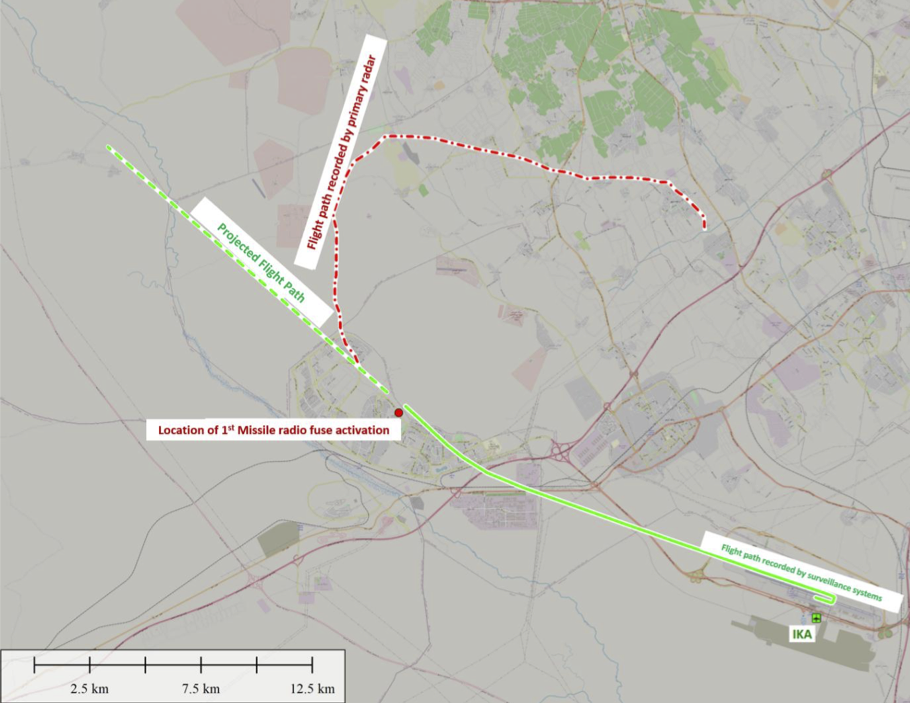 The system operator then “began analysing the observable information and categorised the detected target as a threat” without identifying it as a passenger aircraft. Then, 20 seconds after submitting the detected target details but without receiving the required explicit authority to launch a missile, he did so anyway. The applicable procedure was found to state that “if the system operator cannot establish communication with the Coordination Centre and does not receive the fire command, they are not authorised to fire”.

The Investigation found that the missile radio fuse had been activated when the aircraft had reached the last position recorded by SSR. Once it had been activated, the system radar remained locked on to its target and tracked it and 30 seconds after the first firing, the system operator then fired a second missile at the aircraft. Thirteen seconds after this, “the last communication between this missile and the firing source was recorded in a place close to the (intended) aircraft track” and thereafter, the firing system “showed a message indicating the strike had failed” and the target then cleared from the radar lock-on. 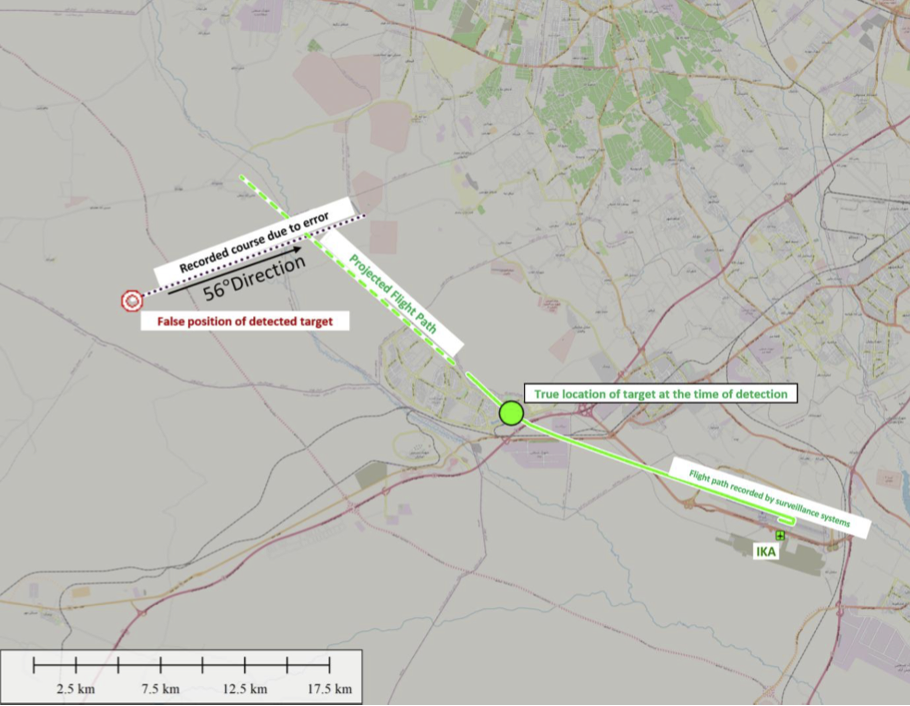 The Investigation has not found any evidence of functional error in the missile defence equipment involved. The sole origin of the erroneous targeting was the failure to correctly align the platform involved after it had been moved to a new position. It was concluded that the positions where the missile warhead radio fuses were activated relative to the accident aircraft flight path indicate that at least one of the two warheads was able to cause functional damage to the aircraft, most probably the first one. However, this finding was qualified by the remark that “since even very unlikely probabilities have the chance to be materialised in aircraft accidents, we need to wait for the end of the Investigation for the final conclusion”.

However, the Investigation considers that “the sequence of events clearly shows the occurrence of a chain of events initiated by a human error”. It has also recognised that “up to this point, some important contributing links in the chain of events ....that if each had not arisen, the aircraft would not have been targeted”, a situation illustrated by the diagram below. 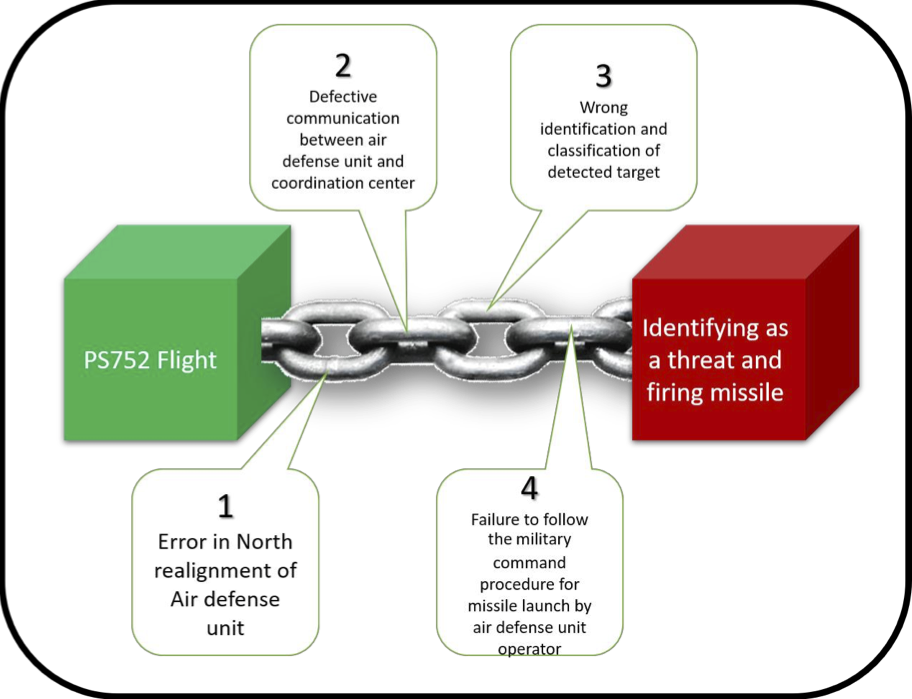 After release of a Preliminary Report on 21 January 2020 which confirmed that the loss of control had been due to missile damage, a Factual Report was then published on 11 July 2020 containing a more detailed timeline based on recorded radar and aircraft flight recorder data. These two reports form the basis of this summary.