On 18 August 2015, a Boeing 737-800 made three unsuccessful ILS approaches at Cochin around dawn then diverted to Trivandrum where a day VOR approach was unsuccessful and a MAYDAY was declared due low fuel. Two further supposedly visual approaches were attempted there before a third such visual approach - which involved ignoring EGPWS PULL UP Warnings in IMC - was followed by a successful landing with 349kg fuel remaining. The Investigation found that aircraft safety had been jeopardised and that Cochin ATC had not communicated information on the deteriorating weather at Trivandrum. Relevant operator procedures were considered as inadequate.

On 18 August 2015, a Boeing B737-800 (VT-JFA) being operated by Jet Airways on a scheduled international passenger flight from Doha, Qatar to Cochin India as 9W-555 (JAI 955) was unable to land off three ILS approaches at destination around dawn after failing to obtain the required visual reference at DA and diverted to alternate Trivandrum where, after an also-unsuccessful non-precision approach in day IMC, a MAYDAY was declared for low fuel. Two unsuccessful "visual" approaches to the same runway at Trivandrum then followed before a seventh approach, also "visual" in the reciprocal runway direction led to an ultimately uneventful emergency landing.

An Investigation was carried out by an Indian AAIB Commission of Inquiry. The DFDR and 2 hour SSCVR were recovered from the aircraft and their data were successfully downloaded. The available SSCVR data began as the crew were discussing their options after the first go around at Cochin. ATC recorded radar and voice communications data from Trivandrum were available because of the MAYDAY declaration made there but these data were not preserved at Cochin.

It was established that the aircraft had been operating a night flight scheduled to arrive at Cochin around dawn and noted that the flight schedule was predominantly within the "window of circadian low" in respect of crew performance. It was nevertheless concluded that the crew had been well rested prior to reporting for duty at Doha.

The designated alternate for the flight was Bangalore. On initial contact with Cochin, the reported weather was unexceptional and the visibility well above ILS minima in (night) haze and the lowest cloud FEW at 1,500 feet. However, after the first ILS approach to runway 27 did not provide transition to the necessary visual reference for landing, an auto go around was "initiated at 256 feet" (procedure DA 320 feet). At this point, the aircraft was still well above Minimum Diversion Fuel (MDF) for Bangalore. After a short time in the hold, the aircraft was cleared for another (night) ILS approach. As it proceeded outbound, the crew discussed the MDF for both Coimbatore and Trivandrum with the First Officer noting that the ILS at Trivandrum was out of service. ATC then advised that an Air India Express 737 ahead had carried out a go around, reporting "low clouds at 600 feet" and that the visibility had dropped from 3,500 metres to 2,500 metres. This second ILS approach was also unsuccessful and a go around was made followed by entry to the hold. During this transition, ATC advised that the next aircraft on approach had also gone around and that visibility was down to 2,000 metres. In the hold, diversion options were again discussed with the Captain eventually re-designating Trivandrum as the alternate "in order to gain more holding time over Cochin" than Coimbatore would allow before beginning the diversion despite the First Officer expressing concern about the possibility of visibility at Cochin dropping further. The Captain was recorded as having "responded that in case of emergency they can ask for Coimbatore" but the Coimbatore weather "was not obtained". After about half an hour in the hold, a third unsuccessful (day) ILS approach was flown in the prior knowledge that the weather had deteriorated further to 1,500 metres in mist with cloud at 400 feet aal and after the go around, with fuel on board just above the calculated MDF for Trivandrum, a diversion there was commenced, climbing to FL 210.

On initial contact with Trivandrum ATC, the weather there had deteriorated too from the 3,000 metres visibility passed earlier by Cochin ATC to 1,500 metres in haze with cloud SCT at 1,500 feet and SCT at 2,500 feet. A day VOR approach to runway 14 was subsequently commenced in accordance with the applicable procedure minima and ATC were made aware of the prevailing "minimum fuel" status. Visual reference for landing was not acquired and as the go around was commenced, a "MAYDAY due fuel" was declared to ATC. The Captain "informed ATC of his intention to fly a right hand visual circuit back to runway 14" which, as the crew had declared a fuel emergency was followed by ATC approving a (day) "visual approach to runway 14". During this manoeuvre, "the crew was not in visual contact with the runway" and subsequently "sighted it very late" and with the aircraft not aligned which resulted in another go around. The same manoeuvre was again requested and again approved by ATC but the Captain was again "not in visual contact with the runway and once again crew was late in sighting the runway, too high on approach and was not able to align the aircraft" for a landing. A third go around at Trivandrum (the sixth overall) followed, with fuel on board now down to 662 kgs.

At 700 feet agl, the Captain requested permission to "make a left 180° turn and self-position for landing for inbound runway 32". On finals following the completion of this manoeuvre with the AP still engaged, the EGPWS caution “TERRAIN TERRAIN” was followed by a series of EGPWS "PULL UP” warnings. In response to both the caution and the warnings, the Captain is heard on the CVR recording saying that "terrain is visual". With a recorded radio height of approximately 50 feet agl, the First Officer selected "Terrain Inhibit" and asked the Captain "do you know where it is?" to which the Captain responds "just going blindly". Soon after this, as the Captain "continued the approach […] with no visual contact with the runway", the AP was disengaged, an EGPWS bank angle alert can be heard and a landing occurs as intended on runway 32. The ground track of the aircraft at Trivandrum during the final stages of the flight are shown on the annotated illustration below. Fuel on board after landing was 349 kg. All three visual approaches at Trivandrum were conducted "in below minima conditions and below circuit altitude". The fact that the flight crew "ignored several EGPWS cautions/warnings on the last approach" before landing on runway 32 was considered to have "jeopardised the safety of the passengers and the aircraft".

Analysis of the evidence showed that fuel planning for the flight had not been a relevant contributory factor to the occurrence. It was, however found that at around the time that the Jet Airways aircraft was making its third go around at Cochin and about to accept radar vectoring towards Trivandrum, Trivandrum ATC "had asked Cochin whether the latest weather has been advised to the diverting aircraft" but had received no response. In fact the most recent Cochin broadcast of the Trivandrum weather had been made half an hour previously, since when a trend of deterioration had continued. The Investigation identified "an apparent lag in (the) flow of information regarding the downward trend of visibility from Trivandrum ATC to the diverting aircraft that were under control of Cochin ATC" and considered that the absence of timely and accurate transmission of weather information for Trivandrum by Cochin ATC "may have had an effect on the decision made by aircraft diverting to Trivandrum". 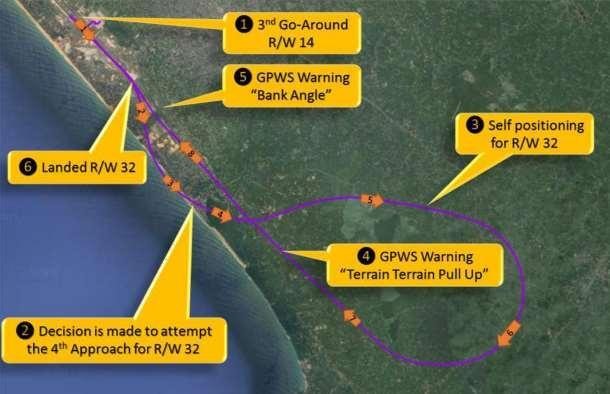 The annotated ground track of the aircraft immediately prior to the landing at Trivandrum. [Reproduced from the Official Report]

Crew decision making was reviewed and found - even without the failure to get the latest weather for Coimbatore as the nearest diversion option and the failure to get the weather for Trivandrum before leaving Cochin - to have been sub-optimal in respect of continued holding and a third approach at Cochin given the deteriorating conditions there. The Captain had also not taken due account of the potential effects of the out of service ILS at Trivandrum. In respect of the Operator context for crew tactical decision making, it was found that "Jet Airways had no company policy pertaining to the number of approaches/missed approaches to be made in inclement weather conditions [or] a company policy pertaining to the re-designation of destination alternate during the flight in inclement weather". These omissions were considered to have contributed to the choice of "an alternate, which was probably not the best decision given available information and the prevailing weather conditions".

The Investigation determined that the Probable Cause of the event was as follows:

The Final Report was completed on 29 September 2016 and released without restriction on 28 February 2017.