On 12 April 2013, a Ryanair Boeing 737-800 took a climb clearance intended for another Ryanair aircraft on the same frequency. The aircraft for which the clearance was intended did not respond and the controller did not notice that the clearance readback had come from a different aircraft. Once the wrong aircraft began to climb, from FL360 to FL380, a TCAS RA to descend occurred due to traffic just transferred to a different frequency and at FL370. That traffic received a TCAS RA to climb. STCA was activated at the ATS Unit controlling both Ryanair aircraft.

On 12 April 2013, an Airbus A319 (CS-TTD) being operated by TAP Air Portugal on a scheduled passenger flight (TAP 706) from Lisbon to Prague and a Boeing 737-800 (EI-ENK) being operated by Ryanair on a scheduled passenger flight (RYR 3595) from Pisa to Lübeck were both in the cruise in Swiss airspace in day Visual Meteorological Conditions (VMC) when they received coordinated TCAS RAs. These were flown and the potential conflict generated by the 737 taking a clearance directed at another Ryanair aircraft was resolved with a CPA of 0.8nm laterally and 650 feet vertically.

An Investigation was carried out by the Swiss AIB (SAIB). Flight Data Recorder (FDR) and Cockpit Voice Recorder (CVR) recording from the aircraft involved had been overwritten and so were not available to support the Investigation which relied primarily on ATCC radar and R/T recordings.

It was established that both aircraft had checked in with the same Zurich ACC frequency at about the same time and were on crossing tracks, the A320 (TAP 706) at FL370 and heading north east and the 737 (RYR 3595) at FL360 and heading north. Approximately ten minutes later, another Ryanair 737 using the callsign RYR 6DW checked in on the frequency level at FL320 and was cleared to FL340. Shortly after this, the first 737 (RYR 3595) asked the controller if there were any reports of turbulence on their route and received the response negative. This was followed by a broken call from RYR 4492 which advised that there was light turbulence over the Alps which RYR 3595 immediately followed up with a request not preceded by their callsign to climb to FL380 due to turbulence. The controller replied to this request with the instruction to RYR 6DW to climb to FL380. The crew of flight RYR 3595 then responded with their own callsign to the clearance for flight RYR 6DW and began a climb. Neither the controller nor RYR 6DW responded to the incorrrect readback of RYR 3595.

The A319, TAP 706, was then transferred to Rhine Radar at FL370 and soon afterwards, an Short Term Conflict Alert (STCA) activation occurred identifying an impending conflict between RYR 3595 and TAP 706. The controller immediately called RYR 3595 to confirm that they were maintaining FL360 and upon receiving a 'negative' response instructed them to descend immediately due to traffic above which was acknowledged with 'descending' but without any mention of a TCAS RA.

In fact both aircraft received and actioned coordinated TCAS RAs, TAP 706 to Climb and RYR 3595 to descend which were actioned. TAP 706 reported theirs to Rhine Radar at the time and RYR 3595 did so to Zurich subsequently. It was noted that "both crews reacted to the visual and aural resolution advisories (RAs) of their TCAS without delay and in accordance with the procedures prescribed by their operator". The CPA - 650 feet vertically and 0.8nm laterally - occurred 12 seconds after the STCA activation.

A radar plot of the conflict is shown below: 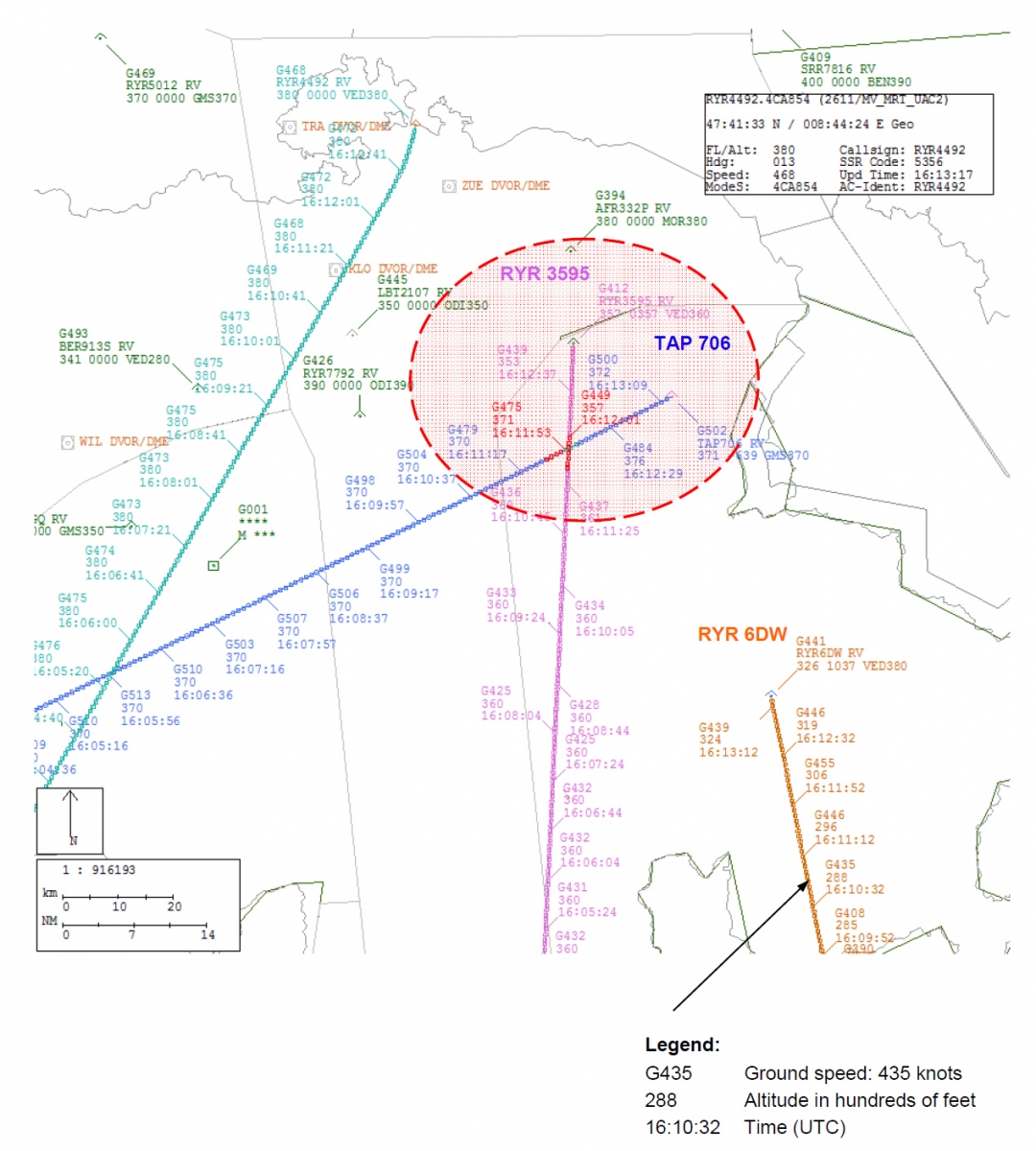 The crew of RYR 3595 were recorded as a French Commander with considerable experience on type accompanied by a Spanish First Officer with less than 1000 flying hours, the majority of these on the aircraft type. The Investigation concluded in respect of both pilots that "all the available evidence suggests that both started their duty well-rested and in good health".

ANSP Skyguide conducted an Air Traffic Capacity Management analysis which concluded that the decision to combine the vertically adjacent sectors in which the conflict occurred "was correct and in accordance with procedures" although it was noted that "a few minutes before the serious incident, the volume of traffic increased significantly" but that "this was not foreseeable because the deviations from the forecasts took place at a very late stage".

The Investigation noted that the two controllers involved in the ATC side of the event, a Radar Executive Controller and a Radar Planner Controller both provided statements to the Investigation to the effect that sector capacity was appropriate to the prevailing conditions - "It was demanding, but we were not overwhelmed; we simply had enough to do." However, in their two Operational Internal Reports (OIRs) written after the incident, they described the volume of traffic as "very high".

In respect of the crew of RYR 3595, it was noted that the failure to prefix their climb request with their radio callsign was not only contrary to universal procedure but had the effect of leaving the controller uncertain as to who had requested the clearance and thereby contributed to the occurrence of the dangerous convergence. It was considered that the fact that RYR 3595 acknowledged the clearance to FL 380 issued to RYR 6DW "might be attributable to the expectations of the former" but it was also considered that "RYR 6DW should have intervened when the clearance to FL 380 issued to them was read back by RYR 3595". Whilst it was accepted that the reason why they did not reply themselves to the call "must be left unanswered", the Investigation considered that "possibly the crew firstly did not expect any clearance because they were already established at the flight level filed in their flight plan and / or, secondly they might have been in doubt whether the clearance was meant for them - a doubt which was dispelled the moment another crew acknowledged the clearance without any delay and ATC did not intervene."

The formal statement of the Cause of the Serious Incident was as that it was "attributable to the fact that the crew of a commercial aircraft initiated a climb without clearance, which lead to a dangerous convergence with another commercial aircraft."

The following Causal Factors were identified as the (direct) cause of the serious incident:

The following were identified as Contributing Factors to the serious incident:

Safety Action taken since the event was noted to have included:

The Final Report was completed on 24 September 2014 and approved for publication by the Swiss AIB on 9 October 2014. The event was classified as an International Civil Aviation Organisation (ICAO) Category 'A' AIRPROX as well as an Annex 13 Serious Incident. No Safety Recommendations were made.