On 18 June 2010 a Sun Express Boeing 737-800 taxiing for a full length daylight departure from runway 06 at Prague was in collision with an Airbus 321 which was waiting on a link taxiway leading to an intermediate take off position on the same runway. The aircraft sustained damage to their right winglet and left horizontal stabiliser respectively and both needed subsequent repair before being released to service.

18 June 2010, a Boeing 737-800 being operated by Turkish operator Sun Express on a passenger flight from Prague to an unrecorded destination and taxiing for a full length departure from runway 06 at Prague was in collision in normal daylight ground visibility with an Airbus 321 being operated by Lufthansa on a passenger flight to an also-unrecorded destination which was waiting on a link taxiway leading to an intermediate take off position on the same runway. The two aircraft sustained damage to their right winglet and left horizontal stabiliser respectively but none of their respective 185 and 151 occupants were injured.

An Investigation was carried out by the Czech Republic Air Accident Investigation Institute. The A321 DFDR was downloaded and the positions of the various aircraft were established using the radar record from the Advanced Surface Movement Guidance and Control System system.

Significant damage to the left horizontal stabiliser of the A321 was found to have occurred - see the illustration below taken from the official report - and part of the vertical section of the 737 winglet had been sheared off and deposited on the taxiway, from where it had been subsequently recovered. 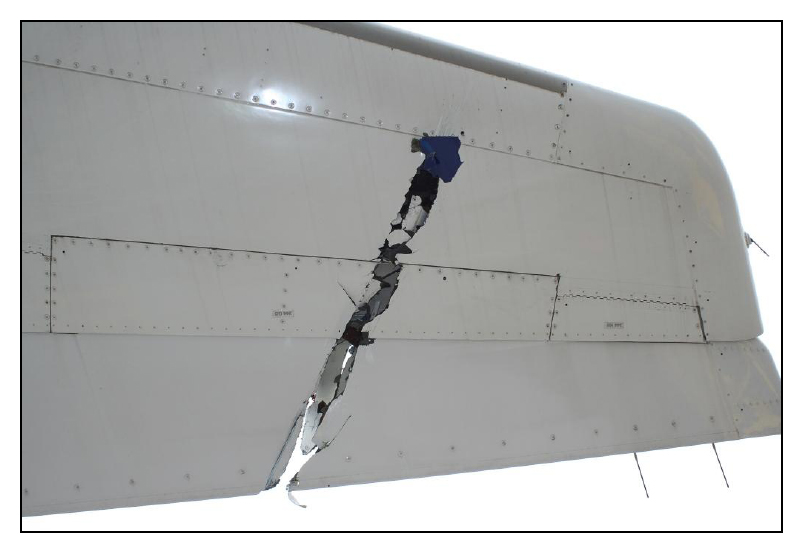 It was noted that the runway in use at the time was 06 and that the benign prevailing weather conditions had played no part in the accident. It was confirmed that the various taxiway markings were in accordance with the requirements of ICAO Annex 14. Both taxiways ‘E’ and ‘F’ were marked as 23 metres wide within a paved strip 44 metres wide. It was noted that there were two designated and marked holding points on taxiway 'E’, one for normal use and one for use in LVP. There was also a broken yellow line marking the boundary between taxiway ‘E’ and taxiway ‘F’ positioned 34.5 metres ahead of the LVP holding point.

It was recorded that the flight crew of both aircraft were experienced on type but apparent from the information documented by the Investigation that both First Officers had acquired in one case all and in the other case most of their flying hours on the single aircraft type involved.

When the collision occurred, it was established that an A320 was stationary approximately 15 metres short of the Cat 1 holding point on link taxiway ‘E’ waiting for an intersection departure and that the 44.5 metre long A321 was also stationary just under 40 metres behind this A320 - although in their statement to the Investigation, the A321 crew estimated that their distance behind the A320 had been 10 metres. The actual stopped position of the A321 nose was coincidental with the broken yellow line indicating the beginning of taxiway ‘E’ so that the whole of the A322 remained on the area included in the designation of taxiway ‘F’ - although only a small part of the rear of the aircraft had protruded onto the paved shoulder of the actual taxiway

A Bombardier CRJ-200 taxiing on taxiway ‘F’ for a full length departure passed behind the A321 with a clearance of approximately 6 metres. Just over two minutes later, the 737, which had been given clearance to taxi along taxiway ‘F’ for a full length departure stopped just before the taxiway ‘E’ turn off and advised it could depart from that intersection but ATC had “for operational reasons” requested that the aircraft continue as cleared.

Just after taxiing resumed, the Captain of the 737 asked the First Officer to check the clearance of the 34.4 metre wingspan aircraft and was told that it was sufficient. On the basis of this assurance, he continued slowly taxiing and as a precaution deviated to the left of the taxiway centreline by approximately 0.5 metres but as the aircraft proceeded, the right winglet had struck the left horizontal stabiliser of the A321.

The 737 stopped and reported the collision on the GND frequency and shortly afterwards, the A321 reported the collision on the TWR frequency. On the basis that neither aircraft had requested assistance, ATC then cleared both to return to the terminal and the emergency services were not alerted. However, since the taxi route back to the terminal involved both aircraft taxiing via runway 06, airport operations were asked to carry out an inspection for possible debris before the runway was used for further take offs or landings. In the case of both aircraft, a damage and consequent risk assessment was not made until the aircraft had reached their parking stands.

Although no direct remark on the matter was included in the Investigation Report, the confirmed position of the A321 and the track of the 737 meant that with the wingtip of the 737 nearly 31 metres from the taxiway centreline, the height of the winglet meant that a collision was inevitable.

The diagram below taken from the Investigation Report shows the stopped position of the A321 at the time of the collision with the 737 passing behind. 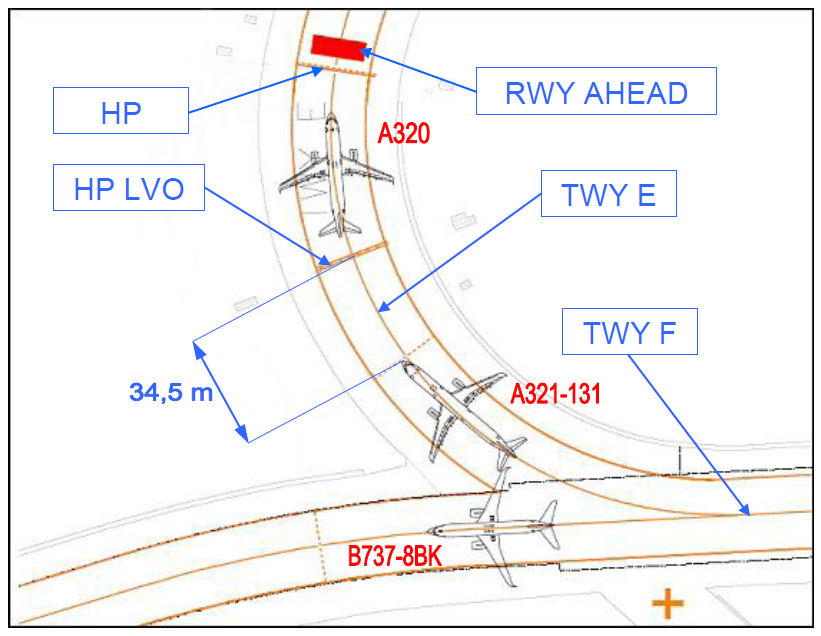 The Investigation Commission came to the following formal Conclusions:

The Commission formally determined that the Cause of the collision was “human factor failure - the taxiing crew did not keep a safe separation distance of their aircraft from the standing one”.

The Final Report CZ-10-229 of the Investigation was completed on 15 November 2010 and published the following month. No Safety Recommendations were made - the Commission commented that any such action would be left to the “discretion of the national AIBs of either aircraft”.