An Investigation was carried out by the Accident Investigation Board Norway (AIBN). DFDR data from both aircraft and recorded ATC radar and communications were available to support the Investigation but no action was taken to prevent the 30 minute Cockpit Voice Recorder (CVR) recording on either aircraft from being overwritten.

The Investigation noted that all the pilots involved were experienced in their assigned roles and generally, as well as being very familiar with Oslo Airport and its air traffic procedures and the fact that the Gardermoen CTZ was class ‘D’ airspace. It was established that on-the-job training (OJT) was in progress at the Oslo APP position, the final radar frequency worked at the Oslo ACC before inbound traffic was handed off to the TWR. It was also noted that there had been a changeover at the TWR position just four minutes prior to the investigated occurrence. The Automatic Terminal Information Service (ATIS) broadcast accessed by the crew of the arriving aircraft was noted to have included the remark “tailwind on final to 2000”.

It was found that at the time of the event, the airport was operating with a single runway (01L) in use for both take offs and landings due to periodic 15 minute closures of alternate (parallel) runways to facilitate snow clearance operations. Three landings had been planned on 01L during the period of single runway operations based on a target distance between successive landings of 8nm - one of them being the aircraft which was involved in the investigated conflict whilst on go-around. 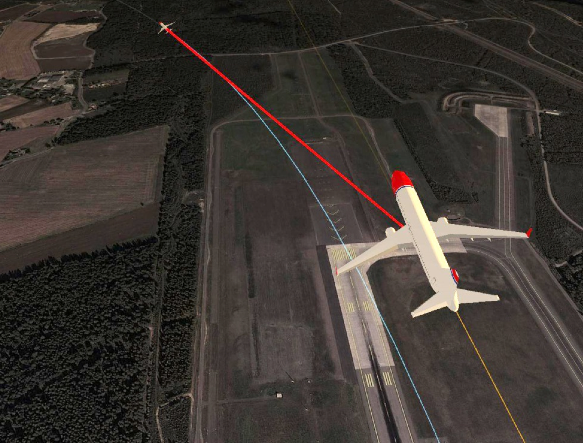 At time 07:35:28. Correlation of FDR data shows that the minimum distance between the two aircraft was 0.17 NM horizontally and 500 ft vertically. Both aircraft were in clouds at this time, which is not depicted in the image. (reproduced from the Official Report)

It was apparent to both the flight crew and ATC from an early stage that the aircraft on approach was both too high and too fast relative to a normal Instrument Landing System (ILS) closure and profile. The Investigation noted that although the aircraft was established on the ILS LOC at a range of 9.5nm, this occurred at 220 KIAS and above the ILS GS at in excess of 4000 feet aal. The Automatic Terminal Information Service (ATIS)-alerted tailwind component was also present.

Although the aircraft commander of this aircraft told the Investigation that “it was difficult to get down to the glide path and at the same time reduce the speed because of the strong tailwind”, they had chosen to continue the approach, “hoping that the tailwind would decrease”. He stated that “they had not applied airbrakes during their descent or during the final approach stage because he considered the effect to be small and it would have led to vibrations in the aircraft, which would have increased further when they set flaps”.

The aircraft was transferred from Radar APP to TWR at 6nm out with an instruction to reduce speed to 180 KIAS or less - airspeed was still indicating in excess of 210 knots at that time with a ground speed of 250 knots. The crew inadvertently selected the wrong TWR frequency and called APP instead so that actual check in with TWR was delayed. By this time, the aircraft was 3.7nm from the runway threshold at an altitude of 2100 feet (equivalent to 1400 feet aal) and still had a ground speed of 250 knots.

Immediately after acknowledging the aircraft checking in, the TWR controller issued take off clearance to the departing aircraft - which had already been advised to commence any required run up and be read to roll immediately they were cleared to do so. Although the inbound aircraft crew heard this clearance, they stated that they did not appreciate its significance as they continued their approach attempt. They had selected Flap 15 shortly before visual contact with the runway when there was approximately 1nm to go but they were still at 700 feet aal (and therefore 400 feet above the ILS GS altitude) and with an airspeed still around 190 knots. At this point - well beyond the 1000 feet aal stabilised approach ‘gate’ which formed part of their operating procedures, the aircraft commander determined that a go around was necessary and advised TWR as it was initiated. TWR acknowledged and added “departing traffic below, essential traffic”.

Soon after the departing aircraft initiated the left turn, it received a TCAS TA with the other aircraft symbol showing 400 feet above on the TCAS display and the crew acted to reduce their rate of climb. Since the TWR controller no longer had either aircraft in sight due to the low cloud base but could see from the radar monitor that both had or could be expected to shortly begin left turns, they advised the departing aircraft of “essential traffic above on missed approach turning left shortly” which was acknowledged. Twenty seconds later, minimum separation of 0.19nm was reached with the aircraft on go around passed an altitude of 1800 feet (equivalent to approximately 1100 feet agl/aal) some 500 feet above the and ahead of the departing aircraft - which was still below 1000 feet agl/aal. With the conflict resolved, the TWR controller transferred both aircraft to the next appropriate frequency.

Subsequently the aircraft on go around also reported receiving a TCAS TA when in cloud and after starting its left turns. When their TA occurred, the flight crew of this aircraft did not see a height tag against the traffic symbol for the departing aircraft but observed that the traffic symbol for it was almost co-located with their position on the TCAS display. They stated that, upon realising for the first time that the other traffic ahead of them had just taken off, they increased thrust to increase their rate of climb. Noticing that it was also turning left, they reported that they had also responded by reversing their direction of turn and going to the right ahead of the complimentary instruction from the TWR controller being received soon afterwards instructing a right turn onto a heading of 360°.

The Investigation noted (listed below in no intended order of significance) that:

In its analysis of the facts gathered, the Investigation’s observations included the following:

A similar event at Bergen on 4 October 2011 which had also been investigated by the AIBN was noted. In this case, a Norwegian Air Shuttle Boeing 737-800 had discontinued its approach to runway 17 just before landing when its crew considered it unlikely that a Boeing 737-300 on the runway and in receipt of a take off clearance would be clear of the runway before their likely time of landing. They were subsequently unaware that the aircraft they were concerned about had actually taken off and was ahead of them until they saw it and made an immediate turn off the same track. Although minimum separation had been only 0.5 nm horizontally and 400 vertically, the Investigation concluded that there had not been any real risk of collision despite the potential for it. This Investigation, with the Final Report published only in Norwegian, had led to the issue of three Safety Recommendations to the State ANSP Avinor, two of which were still open in October 2013, one of which was as follows and was considered to be equally relevant to the Oslo event:

“The two aircraft came into conflict with each other during go-around and simultaneous departure, respectively. AIBN’s assessment is that there was a real danger of collision during this incident. But once the situation was a fact, situational awareness and sound assessments on the part of the aircraft crews and the tower controller prevented a further escalation of the conflict. AIBN considers established and practiced procedures to be conducive to recognising situations and averting them before they become critical.”

Three Significant Findings which were considered to be of decisive significance for the sequence of events or are especially important viewed from a flight safety perspective were also highlighted as follows:

The only information documented in respect of significant Safety Action taken during the course of the Investigation was that to address callsign confusion risks, the aircraft operator involved had since made changes to a number callsigns for flights likely to be operating in the same area at the same time, including changing the callsign for the departing NAX 741 to NAX 1YE to avoid possible confusion with the arriving NAX 740. No new Safety Recommendations were made because the content of one which might otherwise have been was already contained in the previously quoted and still open one made to ANSP Avinor following the similar conflict at Bergen on 4 October 2011.