On 20 June 2010, a Boeing 737-800 being operated by New Zealand company Pacific Blue AL on a scheduled passenger flight from Auckland to Queenstown lost IFR separation assurance against a Boeing 737-800 being operated by Qantas on a scheduled passenger flight from Sydney to Queenstown whilst both aircraft were flying a go around following successive but different instrument approaches at their shared intended destination. There were no abrupt manoeuvres and none of the respectively 88 and 162 occupants of the two aircraft were injured.

On 20 June 2010, a Boeing 737-800 being operated by New Zealand company Pacific Blue AL on a scheduled passenger flight from Auckland to Queenstown lost Instrument Flight Rules (IFR) separation assurance against a Boeing 737-800 being operated by Qantas on a scheduled passenger flight from Sydney to Queenstown whilst both aircraft were flying a go around following successive but different instrument approaches at their shared intended destination. There were no abrupt manoeuvres and none of the respectively 88 and 162 occupants of the two aircraft were injured.

An Investigation was carried out by the New Zealand Transport Accident Investigation Commission (TAIC). Whilst the severity of the actual conflict which had occurred could not be defined in detail because of the non radar environment in which it occurred, the Commission determined that a full Investigation was appropriate because of the likelihood that the systemic risk highlighted by the occurrence was significant. It was noted that the air traffic controller on duty at Queenstown throughout the investigated event was under training and being supervised by an instructor.

It was established that in the case of the Pacific Blue aircraft, the commander was designated as PF in accordance with aircraft handling restrictions applicable to all that Company's flights into Queenstown. This aircraft had been cleared by ATC Queenstown for a non precision approach (the VOR/DME ‘ALPHA’ IAP) as a prelude to a circling approach to runway 23. The reported weather at Queenstown included cloud patches at 1000 ft a cloud base at 5000 ft and visibility of 40 kilometres. The pilots reported that they had considered that the conditions were ‘a bit marginal’ and had discussed the published missed approach procedure in case they could not land. However, the controller had earlier indicated twice that they would become visual and should be able to land. Visual contact with the terrain was acquired at about 500 feet above the MDA, which was equivalent to approximately 3500 feet above aerodrome elevation. Upon reaching MDA, the aircraft began an orbit at that altitude whilst the flight crew reassessed the extent of the cloud in relation to their clearance to continue to a landing on runway 23. Subsequently, the aircraft commenced visual reference manoeuvring below MDA but as they passed overhead the field, it became apparent that the low cloud near the 23 threshold was more extensive than they had previously thought. Shortly afterwards, ATC were advised that positioning to runway 05 would now be attempted, although this intention was not confirmed by a formally amended ATC clearance. However, it soon became clear that they were likely to lose visual contact with the runway because of low cloud and they advised ATC that they had commenced a missed approach and were tracking to the designated missed approach holding point to the south west of the airfield. This was acknowledged by the controller who added “for separation, remain visual if able.” When the aircraft replied “we’ll do our best (we are) intercepting the 212 radial” (the published missed approach track),the controller asked the pilot if he could join the figure-of eight circuit, (see the diagram below) but was told that the flight was intercepting the stated radial and was clear of terrain. The Pacific Blue aircraft was able to clear terrain prior to entering Instrument Meteorological Conditions (IMC).

Earlier the Qantas aircraft, which had previously estimated that they would land about 5 minutes after Pacific Blue, had been cleared by Queenstown ATC to descend to 12000 feet on the RNP ZULU approach for runway 23, later amended to the RNP ZULU approach runway 05. The aircraft was instructed to report passing 6000 feet Altimeter Pressure Settings, which the controller anticipated would occur when the aircraft was about 5nm north-north-west of the airfield. Her plan was that if the first aircraft had not landed or had joined the visual circuit by the time the Qantas aircraft made the report, she would instruct it to commence the RNP missed approach procedure which would achieve at least 1000 ft vertical separation between the two aircraft based on her expectation that the first aircraft would be in or joining the figure-of-eight circuit (see the first diagram below) at 4000 feet QNH.

However, when the Pacific Blue aircraft advised that they were commencing the missed approach procedure as depicted on their IAP Plate for the circling manoeuvre, this invalidated the separation 'plan' made by the trainee controller. Nevertheless, she immediately instructed the Qantas flight, still on its RNP,to commence the RNP missed approach at its best rate of climb. The supervising Instructor-Controller then took over from the trainee.

At one point the Pacific Blue aircraft reported observing a target on their Airborne Collision Avoidance System (ACAS) display which appeared to be a couple of miles behind then and 800 to 900 feet higher but neither aircraft received a TCAS TA or TCAS RA during the period of proximity. FDR data from the two aircraft was used during the Investigation to attempt a reconstruction of the relative flight paths in the vicinity of the airfield and the depiction shown in the second diagram below was developed. It shows Qantas descending then flying a climbing figure-of-eight missed approach whilst Pacific Blue tracks away from the overhead climbing. The contemporaneous positions of both aircraft are shown by the two circles.

It was noted that ATC was required to separate IFR flights from other IFR flights in Queenstown air space, which in the absence of radar had to be achieved procedurally. The ANSP ‘Airways’ reported the event as a possible loss of separation caused by the Pacific Blue aircraft “not following the published missed approach procedure” as a result of which controllers were not certain that the minimum separation of 1000 ft had been maintained. It was noted that at the time of the occurrence, Airways had a multilateration surveillance system on trial at Queenstown which although it only showed unverified positions of the two aeroplanes and their altitudes it had “helped the controllers to manage the situation”.

However, the commander of the Pacific Blue aircraft said later that if ATC had instructed them beforehand to fly the figure-of-eight circuit they might have been able to comply, but once they had commenced the missed approach it would have been difficult to turn right without getting too close to terrain. The commander also observed that as his Company was not authorised to make RNP approaches, its pilots did not know all of the RNP procedure positions referred in communications between ATC and Qantas, and so they had been initially concerned that the Qantas aircraft might be on an approach in the opposite direction to the missed approach track they were flying.

After a full review of the context of the event described, the Investigation analysed the evidence in detail. As a preface to this it was noted that “the mountainous terrain and weather associated with Queenstown Aerodrome make aircraft operations there challenging and potentially more hazardous than at most other airports in New Zealand”. It noted that the high minima associated with non precision approach procedures at Queenstown “meant that jet aeroplanes were not guaranteed to complete every approach” but that “recent advances in RNAV systems mean that true ‘all weather’ operations are now available for flights approved to use that technology although both types of approach could be expected to be in use for some time yet. Apart from the basic concern about safe separation between IFR traffic, there was a specific concern that there was a mismatch between the understanding of the Pacific Blue pilots and ATC of what would follow in the event that it was not possible to land off the circling manoeuvre. A series of other safety issues were also defined and reviewed:

The Visual Circuit for large aircraft (reproduced from the Official Report) 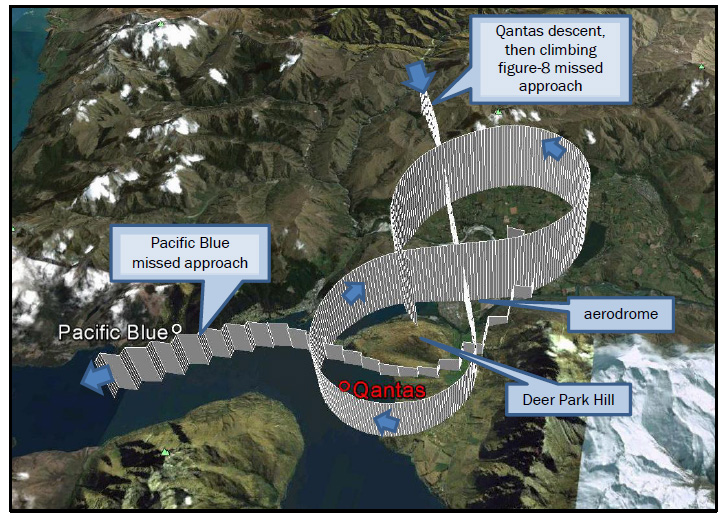 On the basis of this analysis, sixteen Findings of the Investigation were listed which collectively represented a comprehensive indictment of prevailing risk assessment in respect of public transport flight operations at Queenstown and are therefore provided here in full:

A number Safety Actions were taken by Airways to address safety issues identified during the Investigation which had they not been taken would have resulted in Safety Recommendations being issued. These were:

Five Safety Recommendations were issued as a result of the Investigation:

The Final Report was approved for publication by the TAIC on 13 March 2012 and concluded by stating that the “key lessons” from the Investigation were: