On 19 April 2018, a Boeing 737-900 made a high speed rejected takeoff at Kathmandu in response to a configuration warning and overran the runway without serious consequences. The Investigation found that when a false Takeoff Configuration Warning caused by an out of adjustment switch had been annunciated just after V1, the Captain had decided to reject the takeoff because of concerns about the local terrain and locally adverse weather. It was noted that the aircraft operator did not provide criteria for rejecting takeoff up to or above the 80 knot crosscheck but that the Boeing reference QRH did so.

On 19 April 2018, a Boeing 737-900 (9M-LNJ) being operated by Malindo Air on a scheduled international passenger flight from Kathmandu to Kuala Lumpur commenced a high speed rejected takeoff on runway 20 in normal night visibility and overran the runway by approximately 50 metres without any serious damage to the aircraft or injuries to the 139 occupants. An emergency evacuation was not required but occupants had to disembark using a slide because the soft ground meant that stairs could not be positioned at the aircraft. 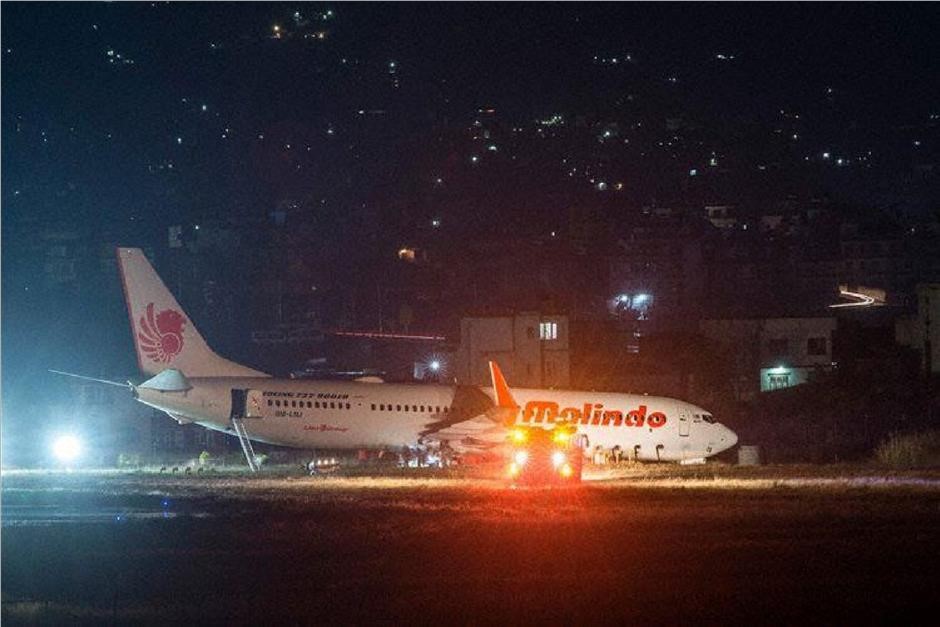 An Investigation was carried out by the Malaysian Air Accident Investigation Bureau (AAIB). The FDR and CVR were removed but no relevant data was obtained as their CBs were not tripped by the flight crew after the event. Data from the QAR was, however, available.

It was established that prior to departing, the flight crew briefing had been focused on the potential impact of adverse weather in the area and en route, the fuel uplift required and engine out procedures for the departure from Kathmandu. Although the flight crew had just flown the aircraft from Kuala Lumpur to Kathmandu, the Cabin Crew for the return flight were just starting their duty period but were not given a pre-flight briefing by the Captain as required by the OM.

The First Officer subsequently stated that prior to the Captain commencing the takeoff roll on runway 20, he had physically checked that the speed brake selector was fully stowed in its down detent. Following a backtrack, the aircraft was kept moving as it came out of the 180° turn and a rolling takeoff was commenced. The Captain stated that all was normal until, “at approximately V1”, a Takeoff Configuration Warning was annunciated. This caused him to physically confirm that the speed brake selector was at the down detent but when the warning did not disappear, he decided to reject the take-off. He reported having applied brake pedal pressure and after a few seconds asked the First Officer to do same. Despite this, they could not stop the aircraft before it overran the end of the runway and onto soft ground where it quickly came to a stop. He stated that he believed that his decision to reject the takeoff was appropriate since the high terrain and bad weather conditions around the airport meant that it would have been “unsafe to continue”.

An annotated ground track of the aircraft take off roll and its rejection. [Reproduced from the Official Report]

The Captain stated that once the aircraft had come to a stop, it had been his initial intention to order an immediate emergency evacuation but he had re-considered this when the First Officer had suggested that it was not necessary since there was no indication of fire or malfunctions apart from the Configuration Warning. Instead, he changed his mind and called the Cabin Crew to order them to remain seated and made a corresponding PA to the passengers. After the APU had been started, both engines were then shut down and the First Officer switched on all the external lights. A few minutes later, the emergency services arrived and a discussion followed on how to get the passengers off the aircraft. It was concluded that it would be impossible to disembark them using steps because of the aircraft position in relation to soft ground and it was decided that everyone would have to disembark using the slide at door 2R. All passengers were then disembarked this way and later, the crew members followed, the Captain being the last to do so but left the APU running and did not electrically isolate the flight recorders.

The aircraft was recovered to a hard surface and found to be almost undamaged except for some main gear wheels/ tyres and all of these were replaced in accordance with AMM requirements.

An analysis of QAR data showed that the applicable V1 of 141 KCAS had been reached with 1500 metres of the 3000 metre-long runway remaining and 4 seconds later a rejected takeoff was initiated at 154 KCAS with approximately 1750 metres of runway remaining. Autobrake was disconnected immediately and manual braking was commenced but initially only at around 30% of maximum pressure and had not reached maximum until 10 seconds had elapsed and the speed was still 120 KCAS. Thereafter, constant maximum pressure was applied continuously until the aircraft stopped. The aircraft crossed the end of the runway onto soft ground at a groundspeed of 30 knots, finally stopping approximately 50 metres from the threshold. An analysis of the failure to stop on the runway, which it was calculated should just have been possible even after commencement of the rejected takeoff above V1, was attributed to a combination of the delay in applying maximum brake pressure, the effect of the runway surface being contaminated with rubber deposits in the runway 02 TDZ and the -1.2° slope of the final part of the paved surface.

Although a full test of the Takeoff Configuration Warning System did not detect any faults, it was found that the speed brake lever switch was out of range and as a result providing an intermittent signal. Following adjustment of this switch, further testing including an engine ground run confirmed that the system was now functioning as intended.

It was noted that although both the aircraft operator generally and the flight crew involved in the investigated event were familiar with the main content of this Technical Memorandum, it also recommended that a rejected takeoff in the event of any activation of a Takeoff Configuration Warning was only appropriate if it occurred up to 80 knots. It was further noted that the content of the aircraft operator’s standard takeoff briefing in respect of a rejected takeoff decision did not replicate that contained in the Boeing QRH for the aircraft type since it did not state more widely what circumstances would justify such action at takeoff roll speeds up to 80 knots or when above it but below V1.

The Probable Cause of the Serious Incident was determined as “the attempt by the Captain to reject the takeoff at high speed following a take-off configuration warning (with) the rejection initiated at a speed of 154 knots, which was above the applicable V1 and without the application of maximum braking throughout the deceleration”.

Eight Safety Recommendations were made as a result of the Investigation as follows:

The Final Report of the Investigation was completed on 3 June 2019 and subsequently published.