On 27 October 2019, an under-floor hold fire warning was annunciated in the flight deck of a Boeing 737-900 which had been pushed back at Paris CDG and was about to begin taxiing. Since there were no signs of fire in the passenger cabin or during an emergency services external inspection, a non-emergency disembarkation of all occupants was made. The hold concerned was then opened and fire damage sourced to the overheated lithium battery in a passenger wheelchair was discovered. The Investigation identified a number of weaknesses in both the applicable loading procedures and compliance with the ones in place.

On 27 October 2019, a Boeing 737-900 (4X-EHE) being operated by El Al on a scheduled international passenger flight from Paris CDG to Tel Aviv as LY326 was about to begin taxiing after pushback and engine start when an under-floor hold fire was annunciated in the flight deck. Since there were no signs of fire in the passenger cabin or during an emergency services external inspection, a non-emergency disembarkation of all occupants was made. The hold concerned was then opened and fire damage sourced to the overheated lithium battery in a passenger wheelchair was discovered.

An Investigation was carried out by the French Civil Aviation Accident Investigation Agency, the BEA. The Investigation was conducted by use of statements and reference to applicable procedures. Since the aircraft electrical power system had remained on, any relevant data on the CVR would have been overwritten and it was not downloaded.

Following completion of the pushback from gate A38 at Terminal 2A, the aircraft was facing west on taxiway P1 with both engines running while the tug was uncoupled. The flight crew reported they were about to request taxi clearance when an ‘AFT CARGO FIRE’ warning was annunciated. The prescribed response was followed with operation of the hold fire extinguishers and advice of the emergency given to ATC. The flight crew then asked the cabin crew to see if they could see any evidence of flames, smoke or heat coming from the cabin floor and the Senior Cabin Crew Member (SCCM) purser confirmed that they could not. The ARFF arrived at the aeroplane within 2 minutes and carried out an initial visual and thermal-imaging inspection and confirmed to the flight crew that no flames or smoke were externally visible.

Nevertheless, the Captain decided that the passengers should be disembarked from the aircraft in its current position using steps at the front left door and asked the cabin crew to be ready to carry out an emergency evacuation if this should become necessary. Whilst this precautionary disembarkation was taking place, the flight crew stated that the same fire warning had come on and off again and towards the end of disembarkation, the cabin crew stated that they had been able to smell smoke in the cabin but were unable to see any.

After all occupants had left the aircraft, the ARFF personnel opened the aft hold door and observed “light smoke” but could see no sign of a fire. All the luggage in the hold was unloaded to enable an inspection for signs of overheating or fire. Heat marks were found on a severely damaged foldable electric wheelchair belonging to one of the passengers which was also emanating a strong smell of burning. This wheelchair was powered by a removable lithium battery and appeared to have been damaged due to its electrical system overheating. The battery itself showed no obvious signs of damage except for a few external burn marks which corresponded to openings in the battery housing. However, a red canvas pouch which touches the battery when the chair is folded in a vertical position and is used to contain the wheelchair battery when removed for folding was found attached to the chair’s handles and exhibited burn marks. 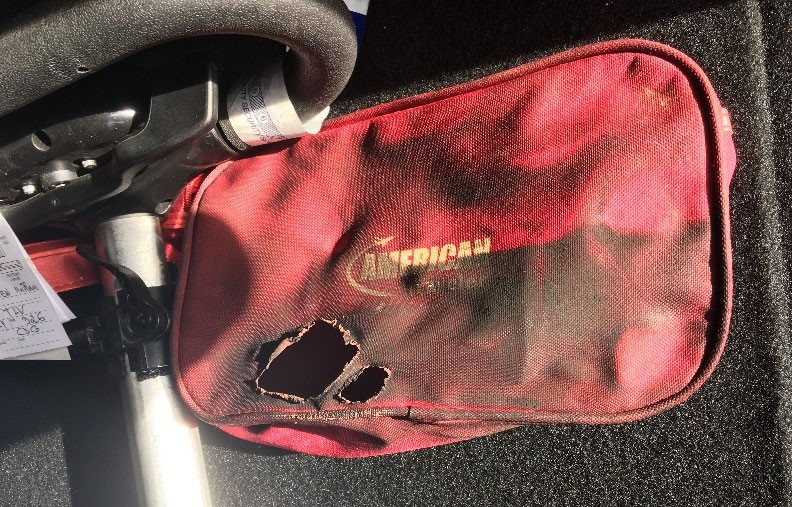 The red pouch which contained the battery. [Reproduced from the Official Report] 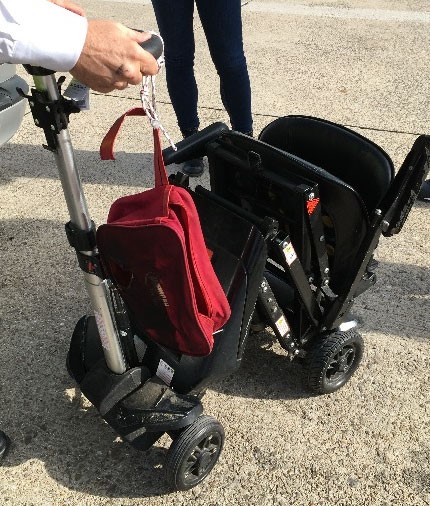 The folded wheelchair - red pouch in situ. [Reproduced from the Official Report] 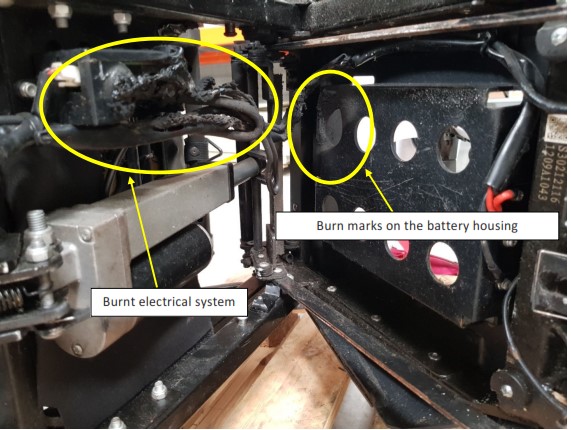 The position of the battery housing in relation to the burnt electrical system with the wheelchair partially unfolded. [Reproduced from the Official Report]

How and Why It Happened

It was noted that transport of powered mobility aids is described in ICAO Doc 9284 ‘Technical Instructions for the Safe Transport of Dangerous Goods by Air’ on which the IATA ‘Dangerous Goods Regulations’ (DGR) are based. The El Al procedures for the transport of dangerous goods were found to replicate these international requirements and stated that the transport of electrical wheelchairs equipped with removable lithium batteries was only authorised subject to the following conditions:

It was also noted that applicable DGR also placed specific responsibilities on ground handling agents who provide services on behalf of the operator which include the acceptance, handling, loading, unloading, transferring or other processing of cargo or mail and the processing of passengers by requiring that “their personnel must be trained in the requirements commensurate with their responsibilities”.

It was found that although aircraft operators are responsible for the check in of their passengers, El Al subcontracted this function to ‘Alysia’ which, in the case of a PRM, required the recording of the presence of any mobility aid being carried on a flight electronically along with information about the type of any battery involved (its serial number, technology and whether it is fixed or removable). This information is transmitted to their ‘Traffic Coordinator’ who must remind the passenger in the departure lounge if they are required to remove a battery and take it into the aircraft cabin with them. The same ‘Traffic Coordinator’ must also advise the Ramp Handling Supervisor of the presence of and type of any mobility aid. The procedure which Alysia was using allowed a passenger wheelchair to be accepted at check-in or, if a passenger so requested, subsequently when they are about to board the aircraft. It was noted that in all cases, the procedure stipulated that the passenger must declare the presence of a battery when the wheel chair is handed over and then remove, isolate and carry any battery with them into the passenger cabin. It was also noted that the airport operator provides assistance to PRMs and that the provision of such assistance for this flight was subcontracted to a service provider called ‘Samsic’ whose personnel “do not take charge of the personal effects of these passengers”.

It was found that on check in, the passenger involved had wanted to keep his wheelchair so as to go from check-in to the departure gate unaided. During check-in, the Alysia Check-in Agent had reportedly questioned the passenger about the type of battery powering his wheelchair and informed him that he would have to remove the battery himself before boarding the aircraft. The Alysia ‘Traffic Coordinator’ reportedly further questioned the passenger who it was stated had replied, in non native French “yes, I’ll do as [when] I came by plane”. When boarding, the passenger was accompanied by the Samsic agent onto the airbridge being used for boarding and this agent had then, as per their procedures, and without the Alysia Traffic Coordinator being present), moved the passenger to a transfer wheelchair. The passenger had then folded and handed over their own wheelchair to an El Al security agent who had then taken it down onto the apron and, after required security checks had been carried out, handed it over to the Alysia Ramp Handling Supervisor. The latter reported having seen a red pouch attached to the wheelchair which he thought appeared to be “full and heavy”. He said he had supposed that the wheelchair battery was in this pouch but was unable to check as his procedures prohibited him from opening passengers’ personal effects. The wheelchair was then loaded and secured in the aeroplane’s aft hold.

After the incident, an Alysia manager stated that they had spoken to the passenger but he had not seemed to understand the questions being asked and gave “contradictory answers”. In a statement given to investigators, the passenger said that during boarding, “the agents told him that they knew what to do with the wheelchair and that he did not have to do anything (so) he had handed over the wheelchair as it was, with the battery in place”. He added that on the flight from Tel-Aviv to Paris, “he had been asked to remove the battery but not on the return flight”.

The Investigation found that the presence of the battery had indeed been recorded by Alysia but not its location or the possibility of there being several batteries. It was noted that two-yearly dangerous goods training for Alysia staff, which included specific coverage of the lithium battery risk, was conducted separately for Check-in Agents, Traffic Coordinators and Ramp Handling Supervisors and found that all those involved in this event were recorded as having completed training that was still current.

The Conclusion of the Investigation was as follows:

Following a lack of understanding and despite the instructions given by the Alysia agents during the check-in and in the departure lounge, the passenger supposed that one of the agents with whom he was dealing was going to remove the battery and that he did not have to do it. The wheelchair was then subject to security checks which are not designed to identify the battery. The loading supervisor then took charge of the wheelchair but did not identify that the battery was still in place: he supposed that the red canvas pouch attached to the wheelchair contained the battery without being able to confirm this. He did not identify or did not know that the passenger should have carried the battery in the cabin.

Following the incipient combustion, a warning was activated in the cockpit. The crew then complied with the procedures, declared an emergency situation and constantly analysed the situation to adapt their actions until all the passengers and crew members had safely left the plane.

Contributory Factors which may have been related to the event were identified as follows:

Safety Action taken as a result of the event whilst the Investigation was in progress was noted to have included the Handling Agent involved, Alysia, addressing weaknesses in the tracking of electrical mobility aids by introducing the requirement for a tracking sheet. This must be initially completed and physically attached to the wheelchair during the passenger check-in process and then added to during the various steps of the handling process. It must show, in particular, the type of battery and whether it is to be transported in the hold or in the passenger cabin.

The Final Report was published in English translation on 24 November 2020 concurrently with the definitive publication in French. No Safety Recommendations were made.