On 6 November 2015, a Boeing 737-900 overran the 2,200 metre-long landing runway at Yogyakarta after a tailwind approach with airspeed significantly above the applicable Vref followed by a long landing on a wet runway without optimum use of deceleration devices. The flight crew management of the situation once the aircraft had come to a stop was contrary to procedures in a number of important respects. The aircraft operator took extensive action to improve crew performance following the event. The Investigation found significant fault with the airport operator's awareness of runway surface condition and an absence of related significant risk management.

On 6 November 2015, a Boeing 737-900 (PK-LBO) being operated by Batik Air on a scheduled domestic passenger flight from Jakarta Soekarno-Hatta to Yogyakarta as BTK 6380 overran landing runway 09 at destination by just over 80 metres after making an ILS approach in day VMC. The aircraft stopped to the left of the extended centreline with its nose landing gear collapsed. The 168 occupants were uninjured and a doors-only evacuation was subsequently completed. 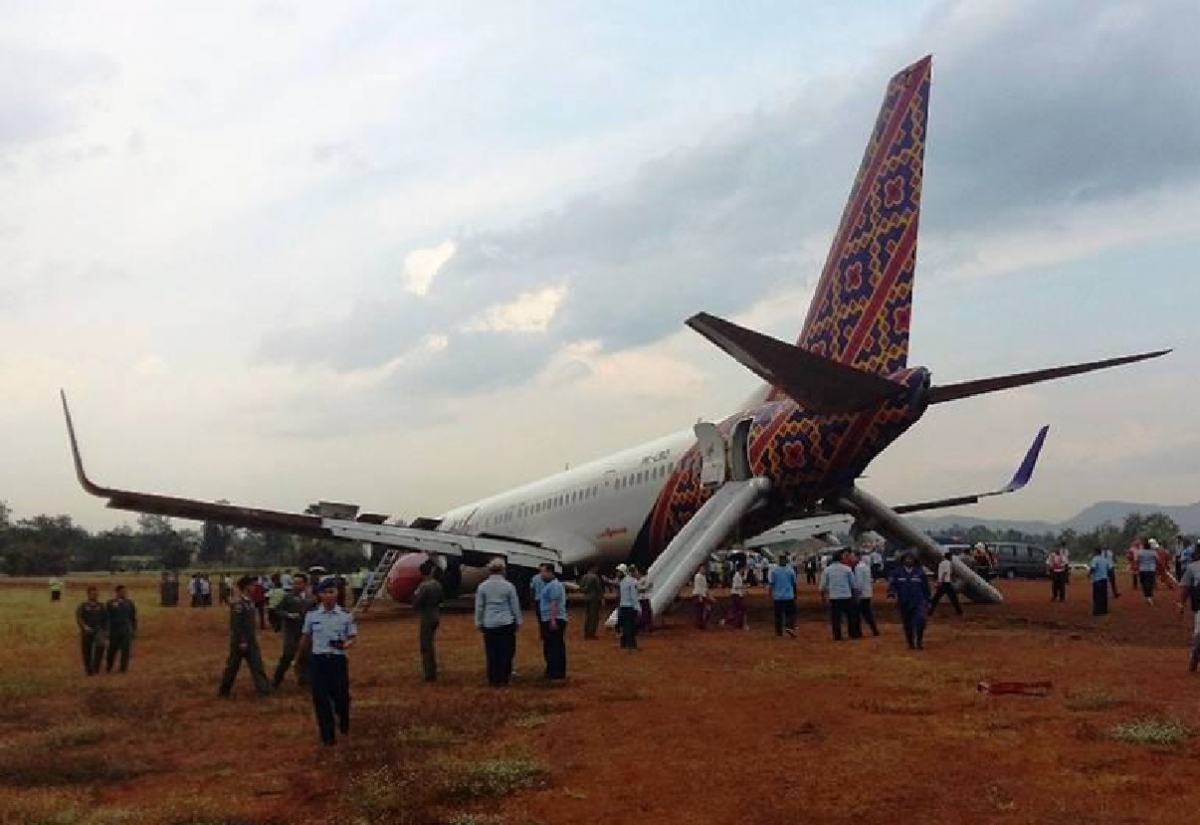 An Investigation was carried out by the Indonesian National Transportation Safety Committee (NTSC/KNKT). Data from the FDR and 2 hour CVR were successfully downloaded. The FDR providing data on 1,265 parameters over approximately 53 hours of aircraft operation which included 31 flights including the accident flight.

It was established that the flight proceeded uneventfully until it was on final approach. Reference Speed (Vref) for the ELW of 63,900kg was 141KIAS. On the basis of the ATIS weather report, the Captain decided that the landing on runway 09 (LDA 2,200 metres) would be with flaps 40 and auto brake 3 but after subsequently observing magenta returns on the weather radar over the airport, he decided to use Flap 30 instead as recommended in the FCOM for situations where wind shear may occur. The aircraft was positioned on the ILS approach to runway 09 and soon after transfer to the TWR frequency, the controller advised that the runway was wet and so it was decided to change the autobrake setting from 3 to Maximum. Landing clearance was accompanied by advice that the surface wind was calm.

FDR data showed that the AP and A/T had been disconnected at approximately 700 feet agl and the speedbrake armed at 500 feet agl. Stabilised approach criteria specified by the Operator were not met at 500 feet agl or thereafter. Passing 381 feet agl, the speed was Vref + 16 and from 200 feet to 10 feet, there was a 6 knot tail wind component. 50 feet agl was passed at Vref + 12 and the aircraft subsequently floated above the runway at 10 feet agl for 6 seconds before touching down 730 metres beyond the threshold at 154 knots (Vref + 13). TWR "provided the landing time and instructed the aircraft to exit the runway via taxiway N3 and proceed to parking stand number 2".

During the landing roll, maximum auto brake was disconnected with the aim of increasing deceleration using manual braking but the applied pressure was much reduced from that applied with autobrake maximum and as a consequence the rate of deceleration decreased. Despite developing concern at the length of runway remaining, the thrust reversers, which had already been reduced from maximum passing 91 knots, had been stowed at 76 knots compared with the recommended <60 knots and this too reduced the rate of deceleration at a time when the length of runway remaining was evidently problematic. Shortly after the aircraft deviated left near the end of the paved surface and crossed onto grass (see below). The nose gear then collapsed and soon afterwards the aircraft came to a stop. The controller "noticed that the aircraft had overrun and pushed the crash bell to inform the Airport Rescue and Fire Fighting (ARFF) Station. 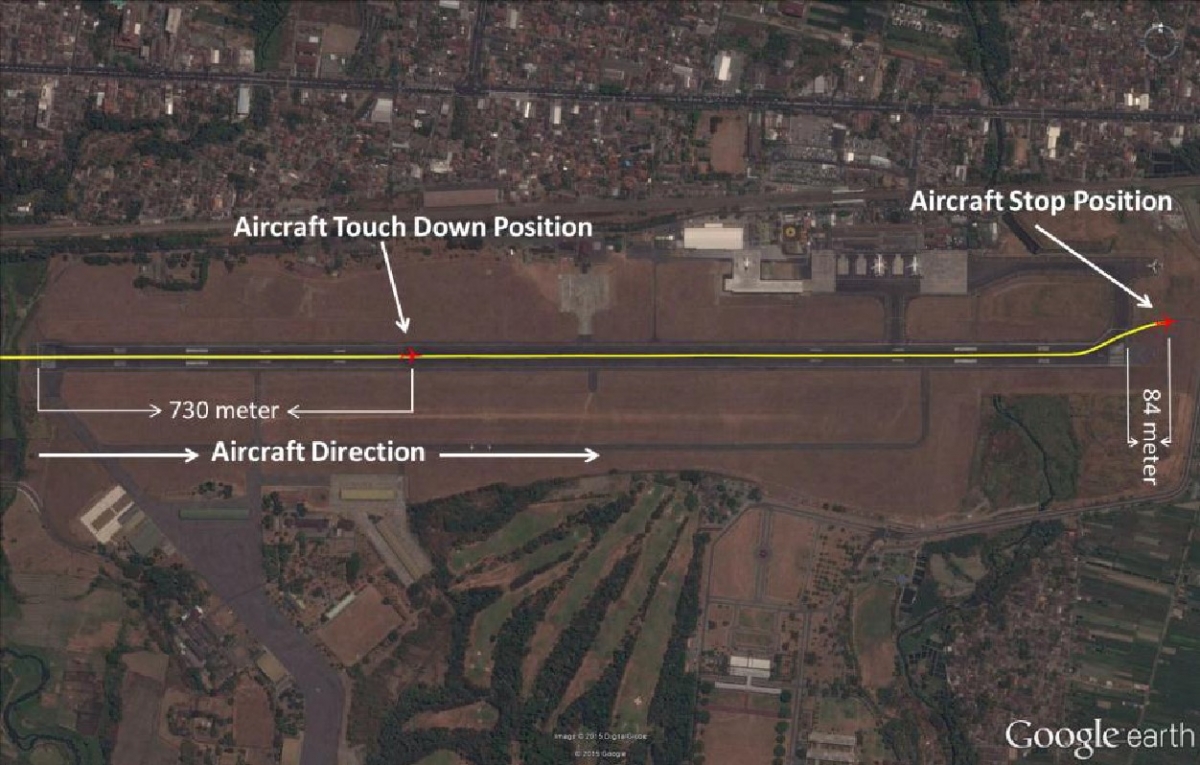 The ground track of the aircraft over, on and beyond the runway [Reproduced from the Official Report]

Two seconds after FDR data showed that the aircraft had come to a stop, the First Officer transmitted "attention, attention crew on station" and the Captain transmitted "BRACE, BRACE, BRACE". Two and a half seconds after that, the First Officer said "Captain, Shutdown Captain" and after a further 10 seconds the Captain again transmitted "BRACE, BRACE, BRACE". Subsequently, the Captain asked the Cabin Crew to check outside for any signs of fire and the First Officer asked the TWR the same. No such signs were reported. Contrary to the QRH Checklist for evacuation, the APU was then started and approximately three and a half minutes after the aircraft had stopped, the Evacuation Checklist was reviewed. The CVR record showed that the evacuation was initially envisaged as taking place without use of the escape slides but it was then decided that they should be used. This evacuation, began approximately nine minutes after the aircraft stopped using only the four doors and was completed in approximately eight minutes.

It was noted that "the decision to land or go around basically rests on an assessment by the pilot in command of the possibility of a critical condition on landing". It was considered that "the CRM principle requires the PM to call out any deviation and to take any action if there is no acknowledgement from the PF" whereas in this particular approach, there had been "no discussion between the pilots concerning the landing distance following the change of the landing configuration to use flaps 30 for the existing condition and no call out from the PM when the speed was 13 knots above the approach speed". The speed being maintained was considered to be "an indication that one of the specified elements of a stabilised approach had not been achieved and that a go around was therefore required".

It was considered that notwithstanding the failure to use braking and the thrust reversers to best effect when attempting to stop the aircraft, "external factors contributed to the reduction in the deceleration rate" and that these included the effect of runway condition on braking action. In this connection, discrepancies in the procedures for friction testing between the Aerodrome Manual and the specified Runway Friction Test SOP were noted as was the absence of any documentation of daily runway inspections for the last month prior to the accident and particularly therefore any observations of standing water. It was evident that the prescribed emergency procedures for evacuation following the overrun had not been performed appropriately by the crew. Specifically:

The Findings of the Investigation included the following in respect of the performance of the flight crew:

Other Findings included the following:

A further Safety Issue was also identified as "the external factors such as runway condition which might have contributed to the reduction in the rate of deceleration whilst brake pressure and thrust reversers were (still) close to maximum."

Eighteen Safety Recommendations were made at the conclusion of the Investigation as follows: