On 27 March 1977, a KLM Boeing 747-200 began its low visibility take-off at Tenerife without requesting or receiving take-off clearance and a collision with a Boeing 747-100 backtracking the same runway subsequently occurred. Both aircraft were destroyed by the impact and consequential fire and 583 people died. The Investigation attributed the crash primarily to the actions and inactions of the KLM Captain, who was the Operator's Chief Flying Instructor. Safety Recommendations made emphasised the importance of standard phraseology in all normal radio communications and avoidance of the phrase take-off in ATC Departure Clearances.

On 27 March 1977, a Boeing 747-200 (PH-BUF) being operated by KLM on a passenger charter flight from Amsterdam to Las Palmas as KLM4805 and a Boeing 747-100 (N73PA) being operated by Pan American Airways on a passenger flight from Los Angeles to Las Palmas via New York as Clipper 1736 both diverted to Tenerife Los Rodeos when Las Palmas was unexpectedly and temporarily closed. When it re-opened, both aircraft taxied for their flights to Las Palmas in succession but the KLM aircraft began take-off in low daylight visibility whilst the Pan Am aircraft was still backtracking the same runway and a collision, explosions and a post impact fire occurred. All 248 occupants of the KLM aircraft and 335 of the 396 occupants of the Pan Am aircraft were killed or subsequently died as a result of injuries received. 61 occupants escaped from the Pan Am aircraft. Both aircraft were completely destroyed and significant damage was caused to the runway.

An Investigation was carried out for the Spanish Government. The DFDR and CVR from both aircraft were recovered and successfully downloaded under supervision in the USA.

It was established that a number of aircraft, including the two Boeing 747s, had been diverted to Tenerife after Las Palmas airport had been closed following a bomb explosion in the terminal building. It had not been possible to park all these aircraft on the ramp and five of them - the two 747s and three single aisle types - had been parked on the parallel taxiway near the runway 12 threshold. When Las Palmas had reopened, the Pan Am aircraft had been ready to go first but there had been insufficient clearance to allow it to taxi past the KLM aircraft parked in front which was not ready because the Captain had decided to refuel the aircraft (taking 30 minutes) so that it would not be necessary to refuel in Las Palmas before returning to Amsterdam. The effect of this was that the KLM aircraft would depart ahead of the Pan Am aircraft - which would in turn also need to backtrack the runway, at least in part, to reach the beginning of the runway in the take-off direction. When this happened, the ATC clearance was to leave the runway at the C3 exit - which would have required a problematic 150° left turn onto the link taxiway followed by an even more problematic 150° right turn onto the parallel taxiway to resume the taxi towards the start of the runway. In the end, for undetermined reasons including either the difficulty locating or using this exit, the aircraft had continued past it towards the next exit, C4 which required only a 35° left turn to exit.

By the time the KLM aircraft had been refuelled, visibility had deteriorated when "low-lying clouds reduced visibility to the point at which neither aircraft taxiing on the main runway, nor some of those located in the parking area, were visible from the Tower". The KLM aircraft was cleared, with the Captain as PF, to enter the runway and backtrack to the first available exit before continuing on the parallel taxiway. When this clearance was misunderstood by the crew, it was revised by ATC to backtrack all the way and carry out a 180° turn to the take-off direction on reaching the end of the runway. The completion of the Take Off Check List by the First Officer was followed 5 seconds later by "a slight increase in the EPR of all four engines" as evident in the DFDR data upon which the First Officer is recorded as saying "wait a minute, we don't have an ATC clearance" and received the response from the Captain of "no, I know that, go ahead, ask". The First Officer then transmitted "Ah - KLM4805 is now ready for take off and we're waiting for our ATC clearance". The communication was heard in the Pan Am flight deck and was followed by the Departure Clearance for KLM from ATC - but not their take off clearance. The Departure Clearance was read back correctly by the First Officer which took 8 seconds. Less than 2 seconds into the read back, the aircraft brakes were released, it began to move down the runway and the Captain was recorded as saying "let's go... check thrust". Having recognised that take-off was beginning, the First Officer added to the end of his read back "we are now at take-off". ATC replied with "OK, stand by for take-off... I will call you". This message ended 2½ seconds after take-off EPR (based on the use of reduced thrust) had been reached on the KLM aircraft.

Immediately on hearing this ATC transmission, the Pan Am Captain, whose aircraft was by this time backtracking the runway prior to exiting onto the parallel taxiway, responded on the radio with "no uh" and the First Officer followed with the transmission "and we are still taxiing down the runway, the Clipper 1736". ATC replied promptly to the Pan Am message with a request to "report runway clear" which received the confirmation from Pan Am of "OK, will report when we're clear". All three messages were audible in the KLM flight deck, the first slightly attenuated by a "shrill noise" lasting 2½ seconds. The KLM CVR recording then showed intercom activity amongst the flight crew which took just over 3 seconds as follows:

Just under 8 seconds after this confident assertion that the other 747 had cleared the runway (and in the continuing absence of a take-off clearance), the First Officer called V1 and rotation was recorded as beginning. Four seconds after this, the CVR records the Captain "uttering an exclamation" and impact with the other aircraft follows almost immediately. The Pan Am CVR recording indicated that it was likely that "its crew saw the KLM aircraft approximately 8.5 seconds before the impact" and "amidst logical exclamations of alarm they accelerated to try to get off the runway but the collision was already inevitable". 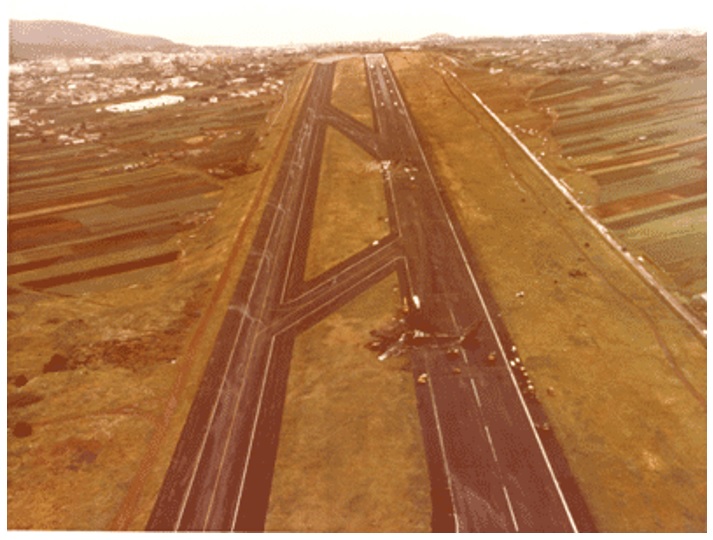 Impact was calculated to have occurred between the runway exits C3 and C4 with the Pan Am aircraft turned approximately 45° to the left as the result of the actions of its crew on sight of the approaching KLM aircraft. The wreckage of the Pan Am aircraft was found approximately 1,385 metres from the start of the 3,400 metre long runway with the wreckage of the KLM aircraft approximately 450 metres further on. It was concluded that the KLM aircraft had been "almost entirely airborne when the impact took place" and that its "fuselage had skidded over the Pan Am aft fuselage, destroying it and shearing off the empennage". After continuing airborne for a further 150 metres, it slid another 300 metres on the runway before coming to a stop and catching fire "suddenly and violently". No exits were found to have been opened on the KLM aircraft and it was concluded that the occupants had perished as the result of the direct or indirect effects of the fire which broke out. Those who escaped from the Pan Am aircraft did so from the forward fuselage in the space of about a minute. It was noted that "the crew and (two Company ground staff who were positioning on the flight) had helped effectively in the evacuation".

The very poor visibility at the time of the accident "prevented the collision from being immediately and directly visible from the Control Tower" where they heard only one explosion followed by another without being able to localise them or ascertain their cause. Nevertheless, the fire alarm was immediately sounded and after receiving an indication that there was a fire "to the left of the parking area", the RFFS vehicles set out in that direction and after "seeing a bright light through the fog" eventually located one and then two aircraft on fire. Having observed that only in the case of one of these (the Pan Am aircraft) was the situation likely to be 'recoverable' in any way, they concentrated their efforts there. The fires were not completely extinguished until the early hours of the following day.

The context for the accident was noted as having been the weather conditions at the airport which was experiencing fog with intermittent clearances to low cloud throughout the period. At the time of the collision, the only runway at Tenerife was 12/30 which was active in the 30 direction and was NOTAM'd as having unserviceable centreline lighting, a matter of some relevance given that pilot confidence that minimum forward visibility for a low visibility take-off is normally determined by the number of centreline lights visible and that the minimum visibility for take-off with only a marked centreline is always higher. RVR was not reported at the airport, but data from a visibility transmissometer at the approach end of runway 30 were available and showed that the runway visibility there four minutes prior to the collision was 300 metres in light rain with fog patches present.

The dynamics of authority on the KLM flight deck were considered, on the evidence available, to have been a critical factor in creating the circumstances that led to the collision. In respect of KLM Captain's commencement of take-off without clearance and apparent failure to monitor R/T effectively in respect of the communications about backtracking by the other 747, it was considered that the fact that he was the Company's Chief Flying Instructor was likely to have been a determinant of the 'authority gradient' in the flight deck between him and both the First Officer and the Flight Engineer in terms of their willingness to openly challenge his errors and narrow focus on getting airborne as soon as possible. The First Officer's hurried addition of the non-standard phrase "we are at take-off" to his Departure Clearance read back when he realised take-off without clearance had begun was his final attempt to respond to the Captain's error before giving up. It was considered that a similar weakness had also been evident when the Flight Engineer's query as the aircraft began to accelerate "is he not clear, that Pan American" received an "emphatic" assertion from the Captain that it was. In the case of the First Officer, it was noted that he had only recently become qualified on type and had been initially certified in that capacity by the Captain. It was considered by the Investigation that "in case of doubt, these circumstances could have induced the Co-pilot not to ask any questions and to assume that this Captain was always right".

The Investigation found that the Fundamental Cause of this accident was the fact that the KLM Captain: