On 1 April 1999, an Air China Boeing 747-200F which had just landed on and cleared runway 14R at Chicago O Hare failed to follow its correctly read back taxi-in clearance and crossed the landing runway at night ahead of a Boeing 747 taking off. The latter rotated abruptly and banked away from the taxiing 747, missing it by an estimated 75 feet. It was found that the Air China aircraft had realised it was going the wrong way but had slowed rather than stopped taxiing with the nose of the aircraft past the runway centreline as it was overflown.

On 1 April 1999, a Boeing 747-200F being operated by Air China on a scheduled cargo flight into Chicago cleared runway 14R after a night landing but, in normal ground visibility, then re-entered the same runway as a Boeing 747-400 being operated by Korean Airlines on a scheduled passenger flight from Chicago to Seoul was taking off on the same runway. The departing aircraft rotated early and immediately deviated from the runway centreline so as to avoid hitting the other aircraft.

Although the NTSB investigated this complex and serious incident, for reasons that have not been established, no formal official report of the Investigation was ever published. However, all the pertinent factual information was officially released during a subsequent overall review by the Board of runway incursions in which this event was one of four examples of serious runway incursions which occurred in 1999 and were detailed at a Public Hearing dedicated to the subject on 13 June 2000.

It was established than the 747-200 had landed on runway 14R and was instructed by the TWR controller to exit the runway via a right turn onto taxiway T10, then a left turn on taxiway K, crossing runway 27L to the south cargo ramp. This instruction was correctly acknowledged. The same controller then cleared the 747-400 for take off on runway 14R. The 747-200 aircraft commander acting as PM and receiving ATC instructions with the assistance of an interpreter subsequently advised the Investigation he had placed his finger on taxiway K on the chart he was using but whilst manipulating the checklist, his finger had unintentionally moved to taxiway M and he had instructed the First Officer to taxi accordingly. The aircraft made a second left turn onto taxiway M, which would take the aircraft across runway 14R at about three quarters along its total available length of 3962 metres.

As the aircraft approached the runway, the commander reported that he had realised that they were not going the right way to the cargo terminal but had only told the PF to slow down not stop and so the aircraft entered the runway at an obtuse angle in front of the departing 747-400. The pilot of that aircraft reported that by the time he had realised what was happening, the nose of the slow crossing aircraft had passed the runway centreline. He had reacted with a more abrupt pitch up than normal at around the calculated Rotation Speed (Vr) and, once airborne, had banked to the left to ensure clearance over the top of the other aircraft.

Subsequent Flight Data Recorder (FDR) download had found that the left bank made had been to 9° and the other aircraft cleared by about 75 feet within 3 seconds of becoming airborne. At the time of the occurrence, there was no controller runway incursion alerting system installed on runway 14R but the NTSB calculated that the system available at the time, Airport Movement Area Safety System (AMASS), would have provided an alert only 6 seconds ahead of a collision when the departing aircraft was already accelerating through 172 KCAS which would have been of no use. The primary concern of the Board was this ineffectiveness of alerting systems. 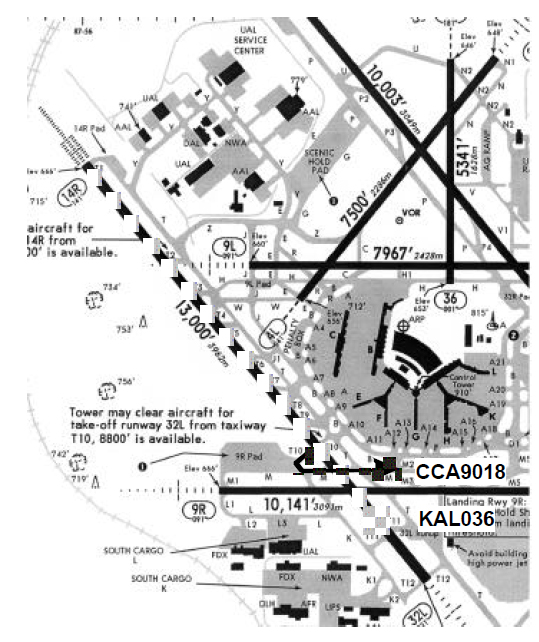 Because of a number of other equally serious runway incursion events had also occurred in 1999, following the 13 June 2000 Public Hearing, the NTSB issued a total of six Safety Recommendations to the FAA aimed at collectively addressing the demonstrated runway incursion risk. These covered:

Since the Investigation, the configuration of runways and taxiways in the area where the conflict occurred has been changed. Runway 14R/32L now terminates before intersecting runway 27L/09R, now re-designated 10/28.